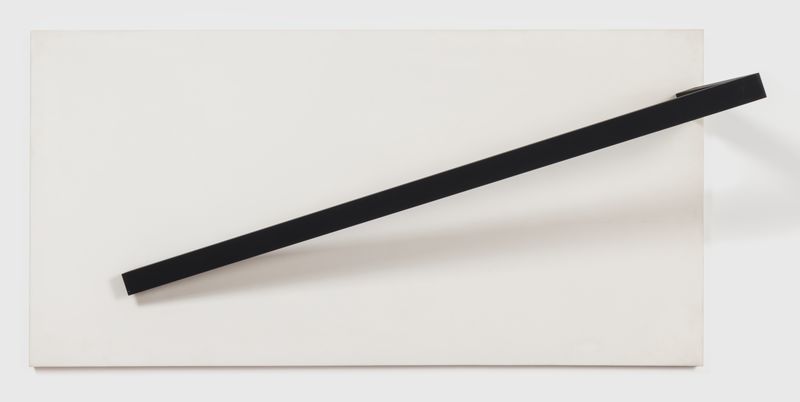 Known as ‘Sarrafos’ (Battens), 1987, the works each feature a pair of bold black bars that are joined together and jut out at sharp, irregular angles from white wooden panels. The gesso is spread so thick on these panels that they look, as her daughter once remarked, like the surface of the moon. Schendel herself described the ‘Sarrafos’ as an attempt to convey aggressiveness, a series of intrusions to shake up the political and economic travesty that Brazil had become. What endures is the slower, subtler beauty of the shadows the bars cast, like delicate lines thrown from an unknown sun into outer space.
Schendel made just twelve ‘Sarrafos’ —most were sold by a São Paulo gallery. One was returned to the family in 1999, eleven years after the artist’s death. Six are included here, the core of a strong, surprisingly layered show. (Scale the gallery’s upper floors and the materials get smaller, lighter, and more luminous—an intimate art of fragility—culminating in a gorgeous ink-and-watercolor collage of a tree above a triangle and rolling mountains [Untitled, ca. 1970].)
Five more ‘Sarrafos’ have been found. One is still unaccounted for. In this context the current exhibition articulates a mystery both practical and metaphoric. Born to a Jewish family in Zurich, Schendel survived Catholic school in Milan but fled Italy during WWII. She lived as a refugee in a string of different cities in southeastern Europe, and eventually became an exile in Latin America. It was her fate to lose things. (She also burned whole stacks of drawings she didn’t like.) The missing piece reminds us: What remains of her work is our gain.
SaveSave