In the 1940s peers like Arshile Gorky, Franz Kline, Jackson Pollock, and Mark Rothko were finding their ways into all-over abstraction. Yet Guston experimented with figures, grounds, solid spaces, and objects until 1950. Pollock – whom Guston went to high school with in Los Angeles (the two were expelled for designing satirical leaflets) and who urged Guston to move to New York in 1935 – had been making abstract paintings since 1939. Gorky had done so since 1932; Rothko and Willem de Kooning reached these further shores by the early 1940s. Guston didn’t go fully abstract until about 1950! History is lucky; had he waited a minute more the Ab Ex train would have left without him and we might never have heard of him.
Guston was always a hesitant plodder, and when he finally did get to real abstraction he stayed ambivalent about it. ‘Every real painter wants to be, and his greatest desire is to be, a realist,’ he said. The abstract works that deservedly won him fame are beautiful shimmering lyrical fields of broken brush strokes, flickering grounds of pearly blue and pink, serene combinations of Monet and Turner with inflections of Mondrian’s early piers-reflected-in-water. But Guston started to feel as if he was only taking small bites. By the 1950s, he felt he ‘had nowhere to go.’ Saying ‘I hope sometime to get to the point where I’ll have the courage to paint my face … to paint a single form in the middle of the canvas,’ he started doing exactly that. And had the courage to do it at the apex of his career.
SaveSave 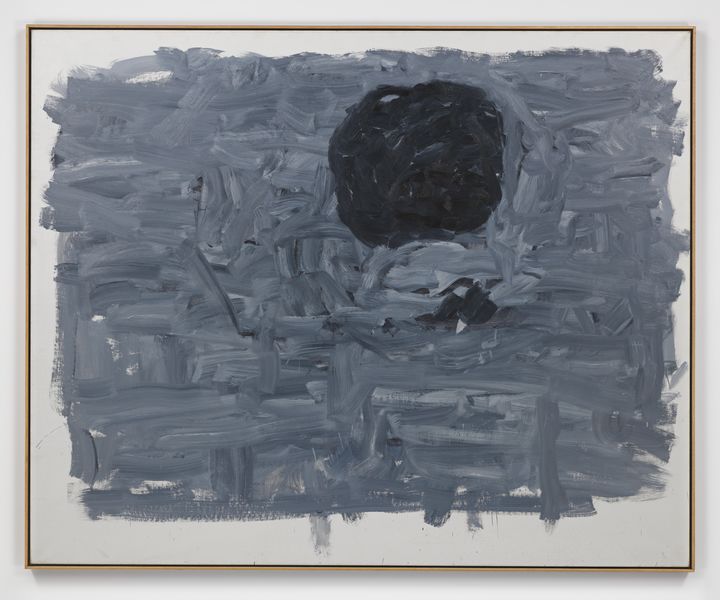 By 1970 he’d finished ‘clearing the decks.’ From then until his death, in 1980, at 66, Guston left abstraction behind and made some of the most memorable and influential paintings of the late twentieth century, big and small: huge, gloppy, opaque-colored images of Ku Klux Klansmen driving around in convertibles, smoking cigars; cyclopes heads, in bed, staring at bare lightbulbs; piles of legs and shoes; figures hiding under blankets, clutching paintbrushes in bed. A lot of these are so narratively accessible they can seem almost comic-strip-like. But also cryptic. I see spiders, newts, malignant clouds, boatmen, snake charmers, lanterns lighting up existential nights. The list of artists influenced by this incredible work includes Nicole Eisenman, Amy Sillman, Albert Oehlen, Carroll Dunham, Elizabeth Murray, and Georg Baselitz, who saw as early as 1959 that Guston was involved with ‘a distortion of the abstract … full of concrete forms.’ Jasper Johns saw that, too.
But the stakes of abandoning abstraction were high. Recognition had come late to Guston’s generation. The Abstract Expressionists had labored alone in America, dirt poor, with no audience, no art-world apparatus to support them. Only one another. As Barnett Newman famously put it, ‘We were making it out of ourselves.’ And those selves were obsessed with going beyond Picasso and into non-objective painting. They had bet their entire lives on the gamble, which is why any sign of apostasy or disaffection was seen as a threat to all. Even after America took notice of the group, in the early 1950s, they were the constant butt of jokes about ‘my 3-year-old’ being able to paint like that. Worse yet, no sooner had they arrived then a new group of artists – led by Jasper Johns and Robert Rauschenberg – arrived on the stage doing totally antithetical work. The world turned on a dime. In 1962, the Sidney Janis Gallery organized a show including Andy Warhol, Roy Lichtenstein, Wayne Thiebaud, and Claes Oldenburg. This was seen as a betrayal by Guston, Robert Motherwell, Rothko, and Adolph Gottlieb, who all quit the gallery in protest. It was the show in which de Kooning reportedly told Warhol he was ‘a killer of art.’ But Guston wasn’t really in line with his colleagues; amidst all this he harbored secret feelings of wanting to change.