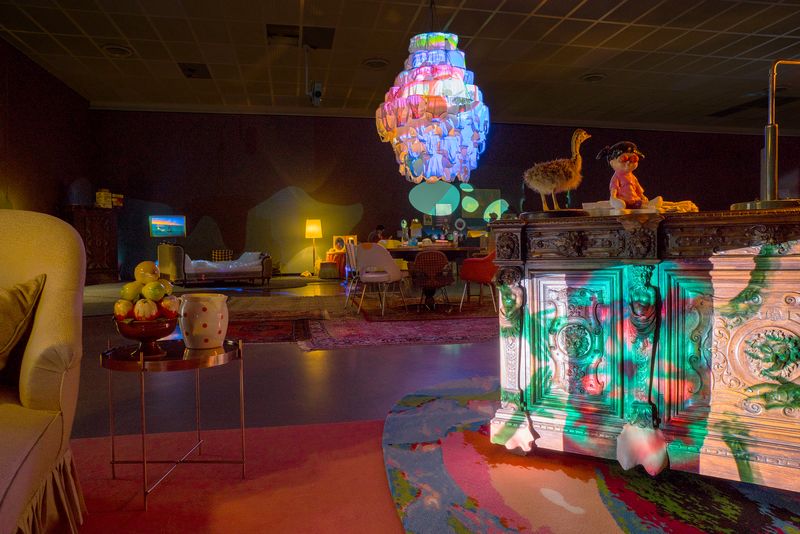 With images broken and visitors continually walking through the beams, the chaotic presentation is a world away from Rist’s breathtaking, meticulous and sensual installation on the ceiling of the Chiesa San Stae at the 2005 Venice Biennale, where she represented Switzerland. But it is a statement of intent; this show does not offer immersive escapism, the lush surrealism of Rist’s visuals notwithstanding. The installation that follows this opening statement places more than 30 works in a pseudo-domestic setting, the sophistication of which gradually emerges.
In a side gallery a row of small monitors shows early works that established Rist’s reputation among filmmakers: I’m Not The Girl Who Misses Much (1986), for example, her lunatic singing rant of John Lennon’s lyric, which embraces a subjective position (in the Beatles song, Lennon sang, “She’s not a girl…”) as well as video’s potential for glitches and frenetic editing. Mutaflor (1996), a short loop around the artist’s body, into her mouth and out through her anus, should dispel any doubt that Rist has always done female (and male) representation on her own terms.
From this point onwards in the exhibition there is no chronology, but clusters of smaller works scattered throughout the dimly lit space, divisions blurred between installations and seating. Tu mich nicht nochmals verlassen (Do Not Abandon Me Again, 2015) is projected onto an unmade bed on which the viewer may lie while human figures tumble through space over them, liberated from earthly gravity as people often are in Rist’s work. Close by is Schminktischlein mit Feedback (Little Make-Up Table with Feedback, 1993), in which a mouth pouts back from a small monitor in the mirror, the table surface scattered with makeup and laboratory glassware. Diminutive screen-based works are to be found in handbags and shells, with projections on pillows, paintings or rubbish bins as well as sculptures. Pieces of typical Swiss secondhand furniture pepper the space, armchairs have darned armrests, shoes are scattered on the floor, ceramics are stacked, and books, some inscribed to the artist, pile up on occasional tables. The books include artists’ catalogues (eg Urs Fischer and Miranda July) and another from Josef Frank’s contemporaneous show Against Design, while the February 6th Economist issue (cover story: ‘How to manage the migrant crisis’) was on top of a prominent pile on my visit. There is cross-pollination of light from projector beams, of paint and plastics that have dripped and pooled over monitors and tables, and the books must shift around the space as people leaf through them. Yet just one principal soundtrack loop accompanies the whole show: a brief track of drips, bird­song and part of Rist’s cover of Chris Isaak’s Wicked Game (1989, which she used in the 1995 work I’m a Victim of This Song). 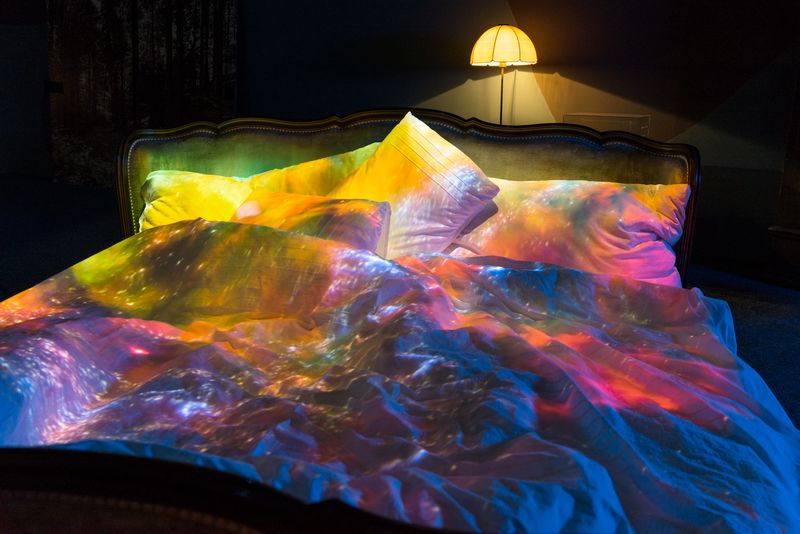 Despite expectations that a Pipilotti Rist survey show would entail large-scale audio­visual spectacle, there is but one huge projection (instead, the virtuoso achievement lies in successfully uniting so many smaller works). Over two walls, Worry Will Vanish Horizon (2014) is a haptic and visual exploration of internal and external landscapes, cameras brushing leaves, stroking the walls of internal cavities or buoyant on a water’s surface. It offers a pre-Anthropocenic landscape you would like to plunge into to forget where you are. But by this stage Rist has made it clear that her perspectives on feminism, family, history, art history, politics and the environment are entrenched in the absurdity and mess of real life and the home. This experience is about awareness, not avoidance.