‘He's insisting on a black radical space in abstraction, and the necessity of that without explaining anything to anyone.’ 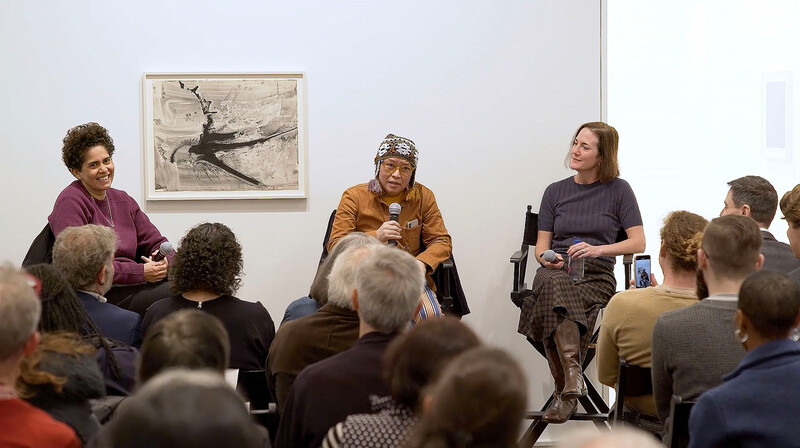 On the occasion of the first major survey dedicated to the artist's works on paper, Phong Bui, Kelly Baum, and Julie Mehretu discussed Whitten's singular vision and his enduring legacy on site at Hauser & Wirth 69th Street. Their conversation is excerpted here and can be viewed in full below.

Phong Bui is an artist, writer, independent curator, Publisher and Artistic Director of the Brooklyn Rail, the River Rail, Rail Editions, and Rail Curatorial Projects. From 2007 to 2010 he served as Curatorial Advisor at MoMA PS1. Forthcoming projects include the Detroit Rail, the first U.S. retrospective of Jonas Mekas, and Artists Need to Create on the Same Scale that Society Has the Capacity to Destroy: Occupy Industry City, Year 3.
Kelly Baum is the Cynthia Hazen Polsky and Leon Polsky Curator of Contemporary Art at the Metropolitan Museum of Art. She has been working as a curator for twenty years at both civic and university art museums, including the Museum of Fine Arts, Houston; the Blanton Museum of Art at University of Texas at Austin; and the Princeton University Art Museum, where she was the founding curator of modern and contemporary art. She co-organized Odyssey: Jack Whitten Sculpture, 1963–2017 with Katy Siegel in 2018.
Julie Mehretu is a world renowned painter, born in Addis Ababa, Ethiopia in 1970 who lives and works in New York City and Berlin. She received a Master’s of Fine Art with honors from The Rhode Island School of Design in 1997. Mehretu is a recipient of many awards, including the The MacArthur Award (2005) and the US Department of State Medal of Arts Award (2015). Recent exhibitions include Venice Biennale (2019) and a mid-career survey at the Los Angeles County Museum of Art, which travels to The Whitney Museum of American Art in New York (2020), High Museum in Atlanta (2020), and The Walker Art Center in Minneapolis (2021). She is a member of the American Academy of Arts and Letters and is represented by Marian Goodman Gallery, New York.

‘There’s this intimacy in seeing these drawings, and it’s a very different experience than the experience I’ve had with his paintings or his sculpture.’—Julie Mehretu

Phong Bui: Julie and I were talking this morning… how do you talk about Jack, the artist without mentioning the person? In some cases the separation is pretty intense, it’s very obvious in the case of Pollock, the alcoholic and the demonic temperament, and the artist, as opposed to let’s say someone like Agnes Martin, when the artist and the person seemed to be one, in unity. You can’t really say that about Jack and that’s not meant to be putting him in a certain niche.
When I first met Jack, really meeting him, was the summer of 2007 when I was going to curate a show at MoMA PS1, and I wanted to curate a show of his abstract paintings. As soon as I knocked on the door, he opened the door and said, “Are you Phong Bui from Vietnam?” I say, “Yes, sir.” And so immediately, he pulled me inside and he took many paintings that we hadn’t even seen for years and years …some were made in the late ’60s. They were his homage to what was going on. You can even say there is anger, an intense anger toward the successive assassinations, for example, with JFK in ’63, Malcolm X in ’65, and both Dr. King and Robert Kennedy in ’67. And then there were painting as his personal protest against the war in Vietnam. So he pulls out this very particular painting that immediately haunted me. It’s called New York Battle Ground.
When I was looking at this painting, and I realized this anthropomorphic terror, these creatures have 52 bombers and have some kind of insect seem to came alive out of this wet paint application on all sides of the painting and then I look immediately at Jason was, of course the monumental September 11, that was just completed to that year, so just no more than four or five months before my arrival. And it was done the opposite. It was done with deliberate, thoughtful, mosaic like structure.
But we both looked at these paintings and we realized they have something in common. First of all, they were composed with the most stable, symmetrical, pyramid, smack right in the middle. And then I realized all these flying creatures are attacking or self destructing themselves into the pyramid. The pyramid also is in the back of U.S dollars. So there’s always money involved here as much as it was in that war in Vietnam. And both of us looking decided, “This is the show,” I said to Jack. And that was it. That was the show we hang those two painting that essentially anchor the show. And that’s how Jack and I met.
…There was a whole incredible spiritual side to Jack that hopefully we can get to at some point. But for now, I think it’s pretty chronological how the show is curated… We can go through it slowly and try to comprehend the complexity of Jack. It reminds me of what James Joyce one said that, “The most difficult remarkable way to describe work of art is depend …” I’m paraphrasing again, “depends how deep that lie have live,” so to speak. So Jack had lived a very deep life. So that’s what we will trying to explore a little bit here. 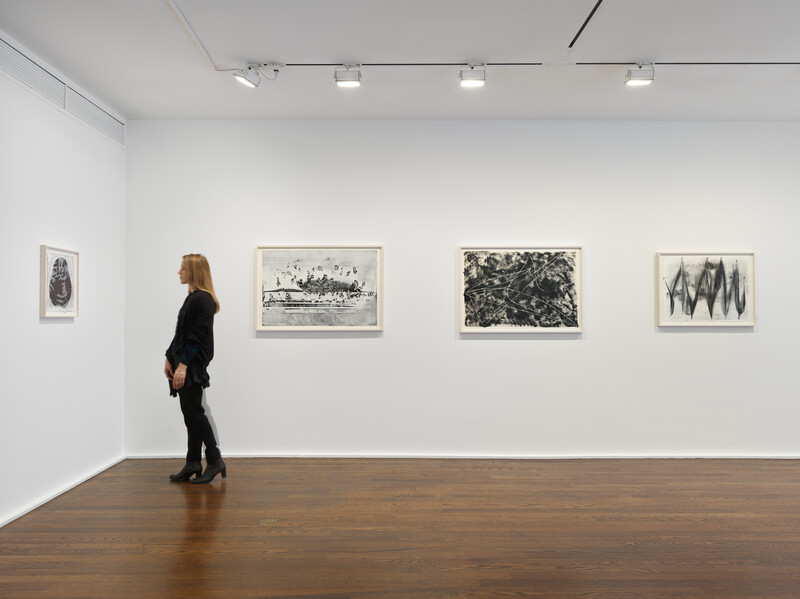 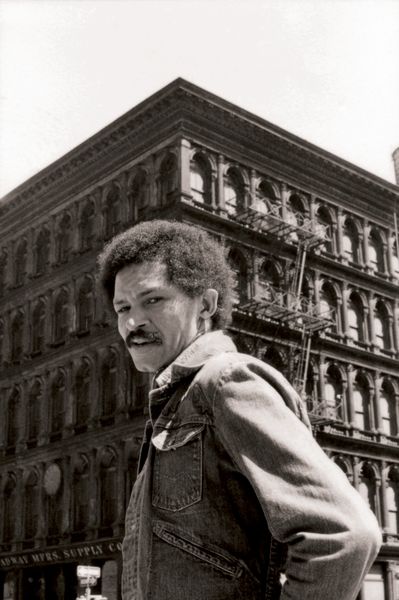 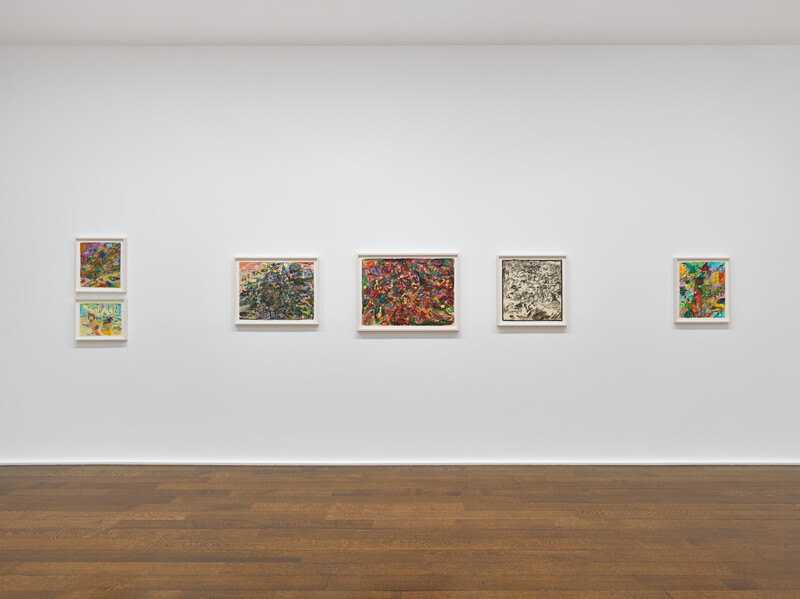 PB: Let’s focus on the ’70s. I think that’s an interesting decade, because that’s when part of the show that Katie did with David was focused in on that pressure, what’s going on in minimalism, what’s going on with pop art and what’s going on in conceptual art. So where does that fit? Where is Jack’s doing? What was Jack doing? How he was thinking about things. And I think that’s interesting.
KB: I associate his work from the 1970s with the impetus to paint without painting. And so he continues to invent tools, actually he finds tools and so he’s using rakes and cones and he’s also placing objects underneath the canvas while he paints so that the resulting surfaces embossed… I’m going to keep going back to the sculpture because it’s such a point of reference for me. His earliest sculptures are from the mid 1960s. This is also the moment when he’s spending a lot of time with African art, the Museum of primitive art, Alan Stones collection in Brooklyn and in ‘Notes from the Woodshed’ he speaks quite a bit about African art as a source, the source of abstraction.
And so I think that I would love to spend more time with the drawings to understand their relationship to the kinds of African art that he was looking at. He doesn’t seem to fit into anyone’s school comfortably. I mean he’s not a conceptual artist, he’s isn’t a process artist, he seems really committed to painting and to painting abstractly. And it’s important to him to do so in a way that’s radically unique and innovative.
JM: I think that he is thinking about this as in a way about being about this idea of like, you mentioned, unique. There was this constant investigation and invention within the materiality of this material and the importance of the object of a painting and the interaction between someone in that and what does that do in the bigger cosmos and what does that do in the bigger system? And how do you find the black sublime? How do you find and that that can only exist within the space of if you think of where terror exists and where majesty and invention can exist, and you think about blackness in this country, that’s a source of that.
KB: He also talks quite a bit in the notebook about the dilemma of being a black artist who wants to work in an abstract mode in the ’60s and ’70s at a moment when there’s pressure to do something quite different. And so when reading those notebooks, I sense his desire and he’s very clearly politically engaged and enraged, about many issues having to do and that’s the reason why he left the South. And so he wants to find a place for politics, and even for his identity as a black man in the work, but without painting the way Jacob Lawrence did and so I see that as part of his thinking, too. Is that real?
PB: Absolutely, yeah. And it’s so interesting too, because when I remember asking Stanley Whitney to write something when Jack passed away, Jack was the one who gave Stanley the affirmation to do what he needed to do. He didn’t have to. He didn’t have to make figurative paintings. He can be an abstract artist. And whatever the conviction, the commitment that drives Stanley to do so was definitely a declarative sense of independence, very serious – with the way that Jack say things sometimes…
He had deep humanity in everything he made, whether a drawing or sculpture or painting. And that’s very evident. Usually, we just have to contemplate in a slower speed, even though at times he wants to move fast… You just need to slow down and look at everything he made.
JM: He wrote this on the second of May 2014: “Completed Du Bois’s of legacy black monolith “Number, question mark.” 1,824 hours for W.E. Du Bois. This is a truly fantastic painting.” Four exclamation marks. “Everything that I want is in this painting, it is sublime. It is world view. It is space. It is light, it is new. Plus, it’s African American. I have arrived at the station. I don’t need the train anymore. The universe will take me wherever I want to go. There is no more desire, I want for nothing. Art is my guide, long live painting. “All capital letters underlined.” I fear nothing. W.E.B Du Bois would be pleased. This is what he wanted for black people. I thank God for W.E.B Du Bois.” And he underlines that and it’s all capitalized. “His words were my inspiration.”