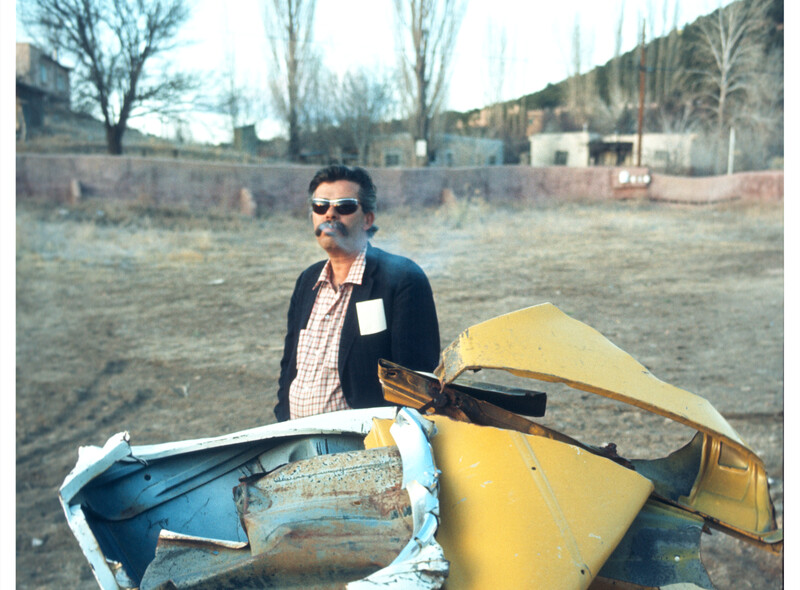 In his classic 1980 New Yorker profile of the dealer Leo Castelli, Calvin Tomkins described Castelli’s traditional division of labor with his cigar-waving aide-de-camp, Ivan Karp. While Castelli dealt with the gallery’s inner-circle members—Rauschenberg, Johns, Stella—Karp kept watch over ‘the rougher and hairier artists.’

Only one name seemed to merit specific inclusion in this second category: that of John Chamberlain—Indiana saloon-keeper’s son, World War II Navy vet, one-time Chicago hairdresser, drinker, brawler, poet and one of the 20th century’s most adventurous pioneers of polychrome sculpture, whom another dealer, Allan Stone, had once described as looking ‘more like a north woodsman than a sculptor.’ But if Castelli considered Chamberlain too feral for comfort, Chamberlain seemed to hold the cosmopolitan dealer in almost filial regard, as evidenced by the letter transcribed below, written just after Chamberlain and his family relocated from New York to Santa Fe in 1965. 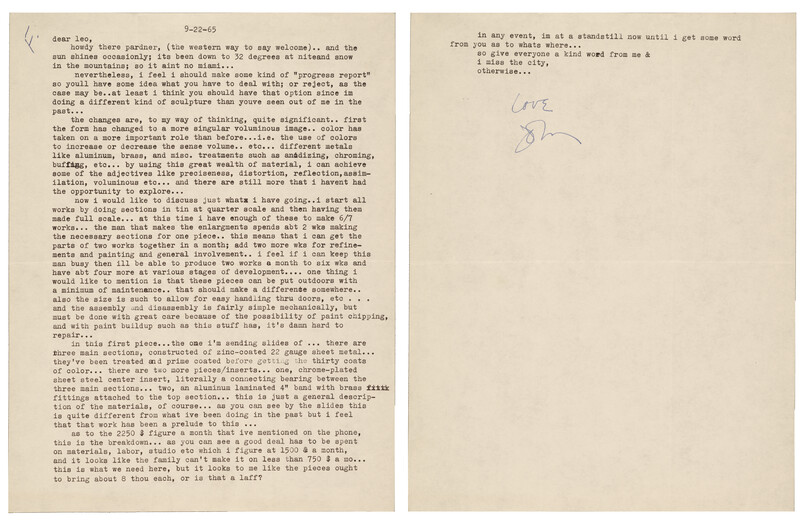 In Tomkins’ profile, it becomes clear that Castelli, in his own way, returned the affection: ‘One time, when Chamberlain was in an unproductive period and his debt to the gallery stood at more than forty thousand dollars, Karp suggested that they cut his monthly stipend in half. ‘How could I?’ Castelli replied, in a shocked tone. ‘He couldn’t get along on that.’ The regular stipend continued.’
–
9-22-65
dear leo,
howdy there pardner, (the western way to say welcome).. and the
sun shines occasionally; its been down to 32 degrees at nite and snow
in the mountains; so it aint no miami…
nevertheless, i feel i should make some kind of ‘progress report’
so youll have some idea what you have to deal with; or reject, as the
case may be.. at least i think you should have that option since im
doing a different kind of sculpture than youve seen out of me in the
past…
the changes are, to my way of thinking, quite significant.. first
the form has changed to a more singular voluminous image.. color has
taken on more important role than before… i.e. the use of colors
to increase or decrease the sense volume.. etc… different metals
like aluminum, brass, and misc. Treatments such as anodizing, chroming,
buffing, etc… by using this great wealth of material, i can achieve
some of the adjectives like preciseness, distortion, reflection, assim-
ilation, voluminous etc… and there are still more that i havent had
the opportunity to exlpore…
now i would like to discuss just what i have going..i start all
works by doing sections in tin at quarter scale and then having them
made full scale… at this time i have enough of these to make 6/7
works… the man that makes the enlargements spends abt 2 wks making
the necessary sections for one piece.. this means that i can get the
parts of two works together in a month; add two more wks for refine-
ments and painting and general involvement.. i feel like i can keep this
man busy then ill be able to produce two works a month to six wks and
have abt four more at various stages of development…. one thing i
would like to mention is that these pieces can be put outdoors with
a minimum of maintenance.. that should make a difference somewhere..
also the size is such to allow for easy handling thru doors, etc…
and the assembly and disassembly is fairly simple mechanically, but
and with paint buildup such as this stuff has, it’s damn hard to repair…
in this first piece…the one i’m sending slides of … there are
three main sections, constructed of zinc-coated 22 gauge sheet metal…
they’ve been treated and prime coated before getting into thirty coats
of color… there are two more pieces/inserts… one, chrome-plated
sheet steel center insert, literally a connecting bearing between the
three main sections… two, an aluminum laminated 4” band with brass
fittings attached to the top section… this is just a general descrip-
tion of the materials, of course… as you can see by the slides this
is quite different from what ive been doing in the past but i feel
that that work as been a prelude to this …
as to the 2250 $ figure a month that ive mentioned on the phone,
this is the breakdown… as you can see a good deal has to be spent
on materials, labor, studio etc which i figure at 1500 $ a month,
this is what we need here, but it looks to me like the pieces ought
to bring about 8 thou each, or is that a laff?
in any event, im at a standstill now until i get some word from
you as to whats where…
so give everyone a kind word from me &
i miss the city
otherwise…
Love,
John
–
‘John Chamberlain: Baby Tycoons,’ an exhibition of a rarely seen series of works begun in the late 1980s, continues through 19 October at Hauser & Wirth New York, 69th Street.