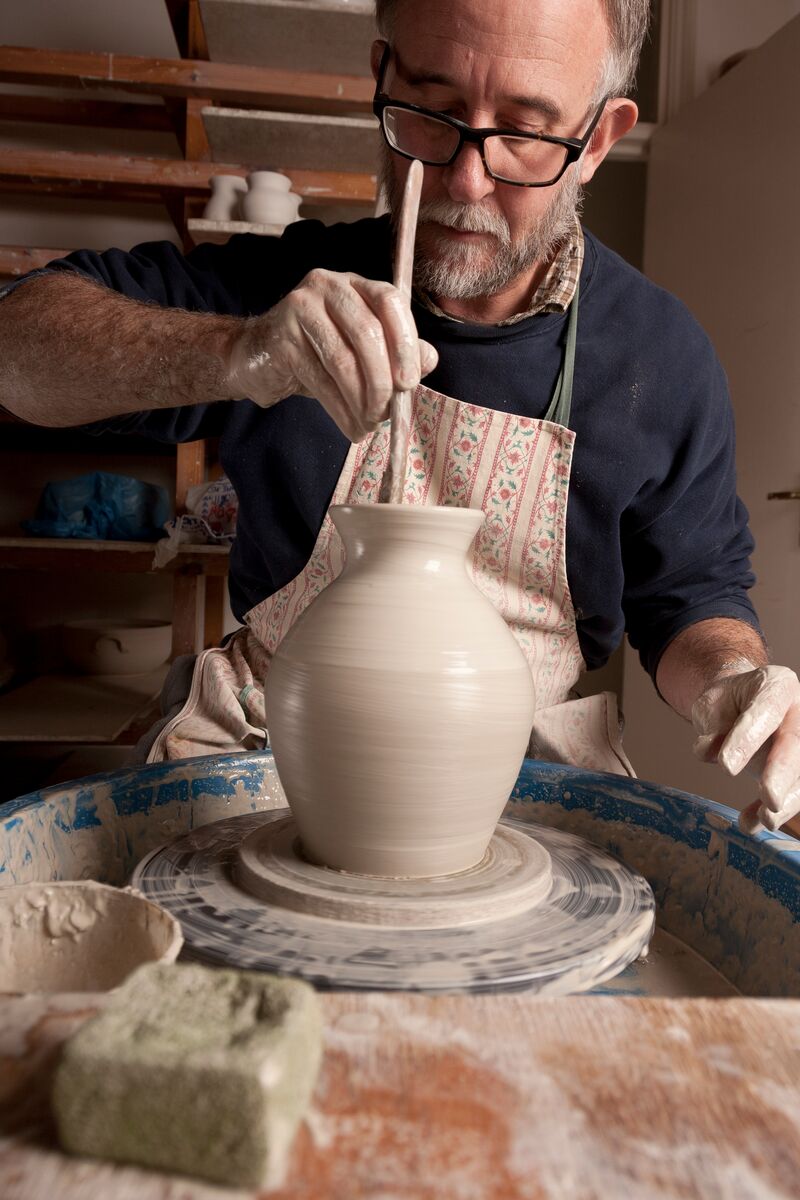 Hauser & Wirth Somerset is delighted to welcome Gregory Tingay as artist-in-residence this Summer.

Tingay first began throwing pots aged sixteen. His early love of making on the wheel, together with a fascination with decoration, has remained constant. The possibilities of pattern and decorative surface in dialogue with the form of the vessel, striving to attain artistic unity, is a perennial source of creative stimulus and satisfaction. Influences and cross-cultural references derive subconsciously from his African childhood, Art History degree, and a passion for invention wherever the pattern is the driving force. There are echoes of Islamic, North African, Sub-Saharan and Aboriginal Art in his work, as well as allusions to the multi-varied European and Asian traditions. It is never a conscious decision where or how the pattern evolves. Rather, Tingay leaves this to the inspiration of the moment and the shape of the pot. Sgraffito, carving through slips and into the body of the vessel is his chosen mode of decoration, balancing the interplay between patterned slip and the background glazed areas, positive and negative space. During his residency, Tingay will explore narrative possibilities of both individual statement pots and their groupings on a larger scale.

Tingay was born in 1965 in Harare, Zimbabwe. After graduation from Trinity College, Cambridge in 1989 with a degree in Art History, he returned to Zimbabwe to lecture in Art History. Subsequently he joined the Benedictine Order where he was known as Brother Alexander. Whilst a monk of Buckfast Abbey, Devon, Tingay trained as a potter with Mary Boys-Adams (née Gibson Horrocks), a pupil of Bernard Leach. Following a move to Quarr Abbey, Isle of Wight, he was mentored by Molly Attrill with support from the Arts Council. He had his first solo exhibition at Quarr Abbey, and then exhibited jointly at Quay Arts Centre, Newport, in 2007. Having left monastic life in 2008, Tingay joined Dartmouth Park Pottery in North London. There he developed his making practice and established himself as a teacher on the wheel broadly within the Leach tradition. Tingay exhibited at the Arts Club, Mayfair (2009), at Cranley Gallery, Highgate (2013 and 2015), at Reindeer Antiques, Kensington (2018), and Coningsby Gallery, Fitzrovia (2018). The closure of Dartmouth Park Pottery at the end of 2018 marked the end of a fruitful decade and the beginning of a new phase in his career. In partnership with Lucy Attwood and Grosvenor Estates, in Spring 2019 Tingay is establishing Studio Pottery Eccleston Place in Belgravia, central London.