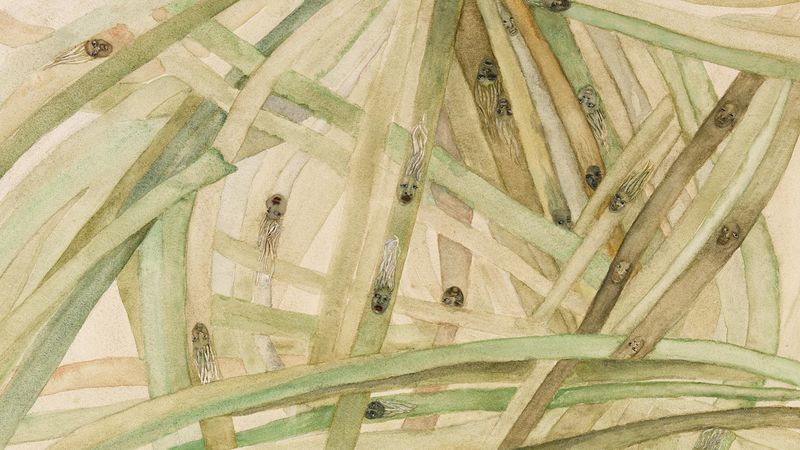 For Black History Month, we are pleased to present ‘AÇÚCAR’ – a film series organized by Brooklyn/Rotterdam-based artist Ellen Gallagher. The films offer a poetically precise and immersive experience in sugar cane and its watery depths. Each film has inspired and impacted Gallagher’s current Watery Ecstatic watercolors, which contemplate seaweed and sugar cane.

The series will feature a long overdue Los Angeles screening of legendary director Euzhan Palcy’s classic masterpiece, ‘Sugar Cane Alley’. Gallagher describes Ms. Palcy’s seminal film as a profound inspiration on her practice: ‘In 1986, I sailed to Martinique aboard the Westward as part of my semester experience at sea. Arriving in the port of Fort de France, I walked through the hillside outskirts and entered the capital to make my pilgrimage to the Schœlcher library. Stepping out from the library I came across jubilant and rowdy student protests to enable widespread access to take the baccalaureate. I joined in and was swept up in this manifestation of radical potential. By good fortune, soon after returning to the United States I was able to view Euzhan Palcy’s film. ‘Sugar Cane Alley’ had a profound impact, and influenced my own potential as an artist.’

‘Wan Pipel’, the first Surinamese film made after establishing independence from the Netherlands, and directed by Pim de la Parra, is a sharp political interrogation embedded in a poetic cinematic form. This film is bookended by two films perhaps more obviously related to sugar cane. If here the working fields remain seemingly dormant, the pressurized Indian and African geographies explode. This movie is about a subtle exchange between this charged space. Due to his independent spirit, Pim de la Parra knowingly envisions the complex multi cultural society in Suriname – which surges from the first Suriname based cast. After the release of ‘Wan Pipel’ de la Parra makes ‘Blue Movie’ – this sexually provocative film will have an impact on Dutch age limitations on cinema.

The series takes its name from the artist’s third film selection, ‘AÇÚCAR’. Directed by Renata Pinheiro and Sergio Oliveira, the film is set in Pernambuco, named for the rainforest, long since replaced by fields of sugar cane plantations…though now over grown and out of “service”. In ‘AÇÚCAR’, the Pernambuco becomes a universe of magic realism that crosses the personal story of Bethania with the Black Atlantic identities that make up contemporary Brazil.

This film series is free and guests are welcome to attend all three screenings. Reservations are recommended due to limited space. Click here to register.

About Ellen Gallagher
Ellen Gallagher (b. 1965, Providence, Rhode Island) lives and works in New York and Rotterdam. Gallagher has a solo exhibition opening at The Power Plant, Toronto (2018). She will also be showing a newly commissioned film installation at Prospect.4 New Orleans, Contemporary Arts Centre, New Orleans, which opens 18 November 2017.

Her work was selected for the 2003 and 2015 Venice Biennale. In 2000, she was awarded the American Academy Award in Art.