The Life and Death (and Life) of Painting 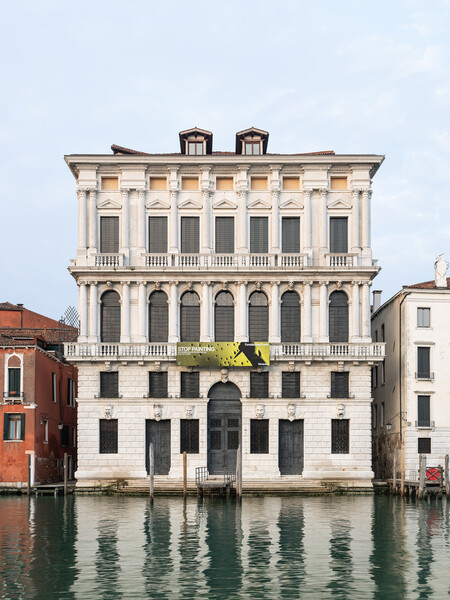 Described by Fischli as ‘a kaleidoscope of repudiated gestures,’ the exhibition includes 110 artworks by more than 80 artists, spanning some 150 years—paintings that challenge, in myriad ways, rapidly shifting cultural values, concerns around the role of representation, and the impact of new technologies on the creation and dissemination of art. Shot through with humor and social critique, ‘Stop Painting’ tells a story of art that is idiosyncratic, playful and challenging.

Eva Fabbris, the exhibition’s associate curator, spoke recently about its eclectic selection of artists, from Francis Picabia and Schwitters to Lee Lozano and Gustav Metzger, along with others not commonly considered in painting’s domain, like Walter de Maria and Adrian Piper. 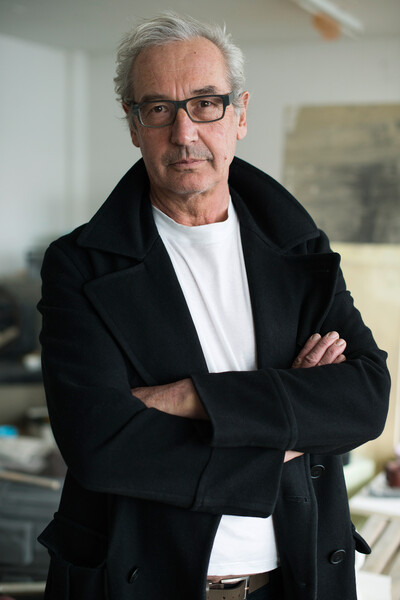 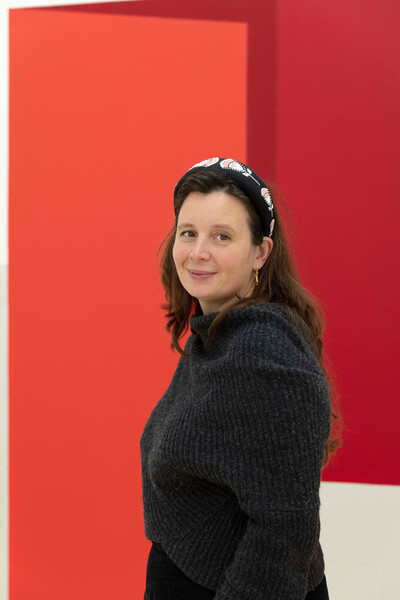 Jennifer Higgie: ‘Stop Painting’ is something of a paradox: an exhibition that pivots on painting’s demise and yet is full of the medium and its possibilities. What was the evolution of the show?

Eva Fabbris: The Fondazione Prada Venice has a history of giving artists—for example, Francesco Vezzoli and Thomas Demand—carte blanche to conceive an exhibition. When we invited Peter Fischli, he decided to address painting, as it’s been declared dead so many times over the past several decades. When he was teaching at the Städelschule in Frankfurt, Fischli realized that young painting students were approaching the medium in a totally different way than they had when he was a student, when painting was considered a reactionary medium; it wasn’t a radical option. He wondered why he felt he didn’t have the same freedoms as his students did to experiment with the medium. So he decided to explore the history of so-called anti-art and anti-painting and look at parallel changes in technology and philosophy and their impact on art.

JH: The title of the show was inspired by Jörg Immendorff’s 1966 painting ‘Hört auf zu malen’—‘Stop Painting’. Was that the main springboard for the exhibition?

EF: Yes and no. It was a starting point, but ultimately Fischli wanted the show to be open and discursive, not framed by the work of a single artist. The playfulness and iconoclasm of Francis Picabia, for example, was particularly central to the evolution of his thinking. Schwitters, who couldn’t stop painting figurative compositions throughout his life, is another seminal figure. 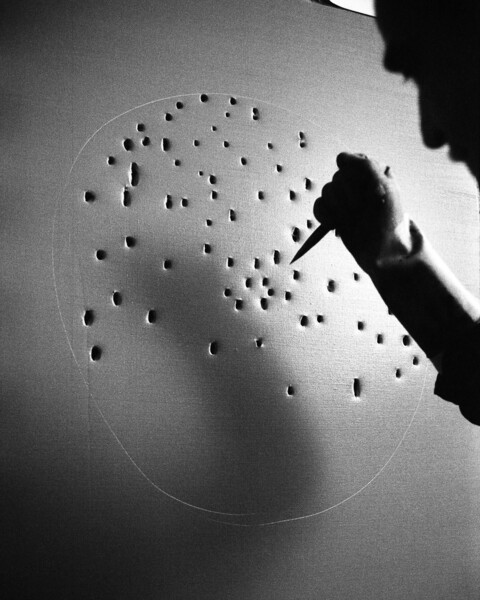 JH: ‘Stop Painting’ includes 110 works by more than 80 artists. What was the rationale behind the selection?

EF: In early discussions, Fischli used the word ‘crisis’ in relation to painting but then decided that he preferred the less negative connotations of ‘rupture.’ He identified five significant ruptures that have taken place over the past 150 years or so: the invention of photography; the use of readymades and collage by artists; the death of the author; the critique of painting as commodity and finally, the crisis of criticism. But he also realized that he wasn’t interested in wearing the shoes of a curator or an art historian, so he employed the five ruptures to both tell a story and to shake up art history: he wanted to create new categories that are subjective and non-linear. It was important to him that there’s no correct journey through the 10 sections of the exhibition: visitors can choose their own route, forming their own connections and associations. 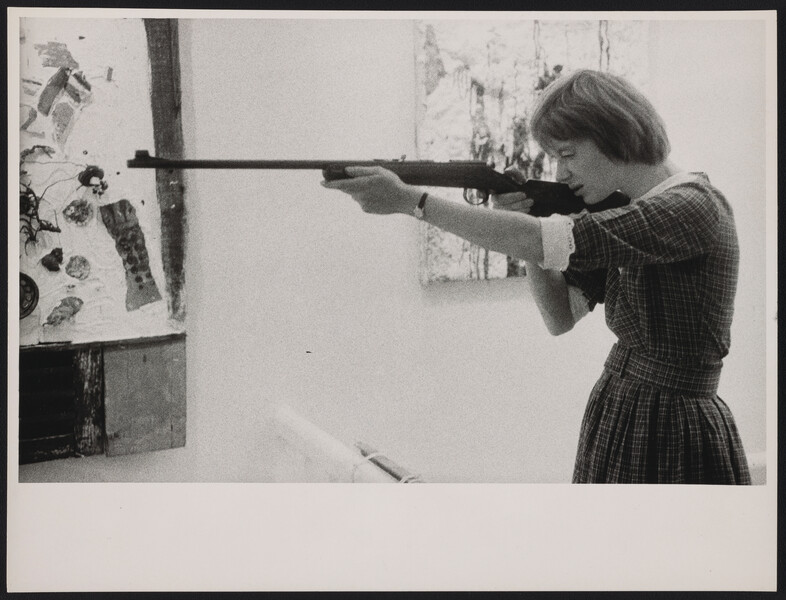 JH: How are the 10 sections defined?

EF: The act of shaking up the art-historical canon and blowing apart chronology (after acknowledging it through the five ruptures) is the essence of the show’s structure, which is strongly linked to the architecture of the exhibition venue, Ca’ Corner della Regina. The 10 sections occupy 10 rooms on the ‘piano nobile’ of this frescoed Palazzo. Fischli made numerous models in his studio, far more than a curator or artist usually does. The final one is exhibited on the ground floor of the exhibition, along with a slideshow of photographs from his phone. He sees the models as ‘thinking machines,’ created in order to group artworks into significant theoretical and architectural unities. During the conception of the show, Fischli gave each room a nickname, and they stuck; he also wrote a short text, which is on the wall of each room.

JH: What are the titles of the 10 sections?

EF: ‘Delirium of Negation’; ‘Mensch Maschine (Man Machine)’; ‘Niente da Vedere, Niente da Nascondere (Nothing to See, Nothing to Hide’); ‘Word Versus Image’; ‘When Paintings Become Things’; ‘Let’s Go and Say No’; ‘Readymades Belong to Everyone’; ‘Spelling Backwards’; ‘Die Hard (Stirb Langsam, Duri a Morire)’; and ‘Next to Nothing.’ Where each artist ended up was completely up to Fischli; it’s his way of telling this story.

JH: How long did it take to put the show together?

EF: Three years, but in essence two, because of the pandemic. In a few instances, we travelled to select work—Ben Vautier and Niki de Saint Phalle in Nice; Boris Lurie and Lynda Benglis in New York City—but in the main, Fischli had a very clear idea of which artists and what artworks should be included.

‘In many ways, this exhibition is like an extended artwork.’—Eva Fabbris 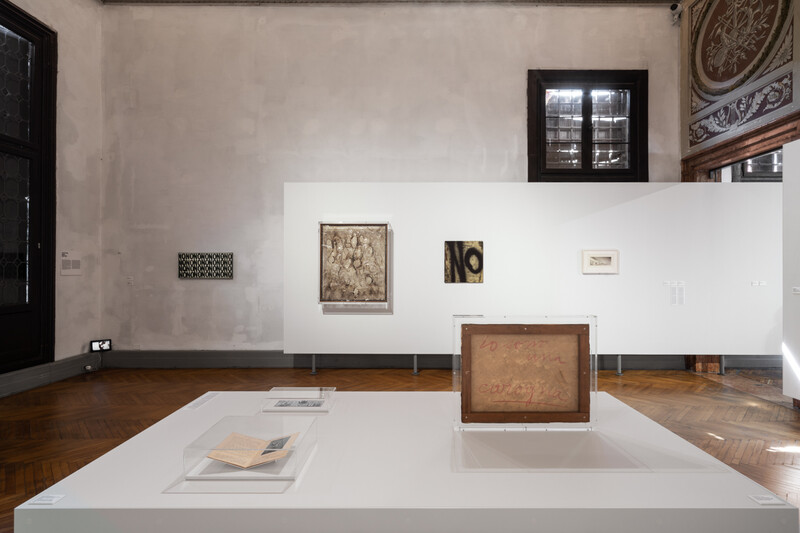 JH: Most of the artists in the show seem to be united, if at all, in their awareness of painting’s possibilities and its failings. When Metzger, for example, made his ‘auto-destructive’ paintings by spraying acid onto canvas, he was questioning long-established ways of doing things—which had resulted in the catastrophe World War II. In his creation of a new artistic language, his images are symbolic, perhaps, of the possibility of a better, kinder world.

EF: Yes, Metzger is included in the section ‘Let’s Go and Say No.’ It’s one of the most intense rooms in the show: artists attacking the medium, physically. What is evident here is the connection between a critique of painting and a critique of the cultural industry, beginning with the worker and student protests of the late 1960s. 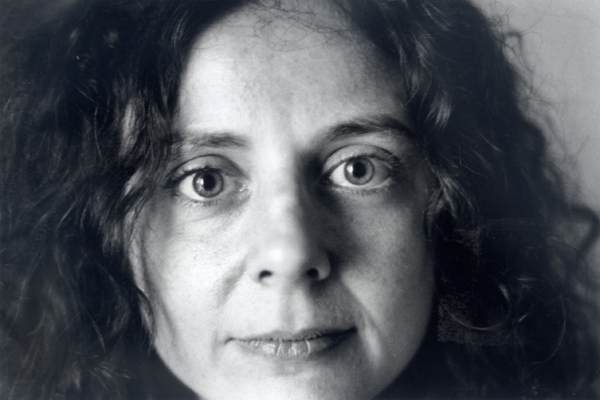 JH: Lozano is shown alongside Metzger with her ‘General Strike Piece’ (1969); she refused to participate in the art world altogether as a protest of art’s commodification, its sexism and racism—what Fischli describes as ‘radical actions of total rejection.’ How are such different approaches reconciled in a single exhibition?

EF: Fischli grouped artists together if they shared an interest in exploring the limits of painting—even if the end results were very different and articulated from different cultural viewpoints. For example, ‘Let’s Go and Say No’ also includes Henry Flynt’s placards protesting art museums, Boris Lurie’s ‘No’ paintings, Lucio Fontana’s slashed canvases from the 1960s, and an x-ray of Robert Rauschenberg’s ‘Erased De Kooning’ (1953).

EF: ‘Erased de Kooning’ was central to Fischli’s conception of the show. In 2010, SFMoMA took an x-ray of it to learn more about the de Kooning drawing that Rauschenberg used for the artwork. Showing a full-scale print-out of this infrared scan emphasizes, in a way, the radicality of Rauschenberg’s iconoclastic intentions. It reveals de Kooning’s original drawing (at least one of his women is recognizable) and traces of the erasure. Displaying the x-ray is a perfect alternative to the actual drawing and it exemplifies the show’s approach: playful and full of possibilities about a new kind of art history.

‘Around 1840, on hearing about the invention of photography, [Paul] Delaroche famously declared that ‘from today, painting is dead.’ ’—Fabbris 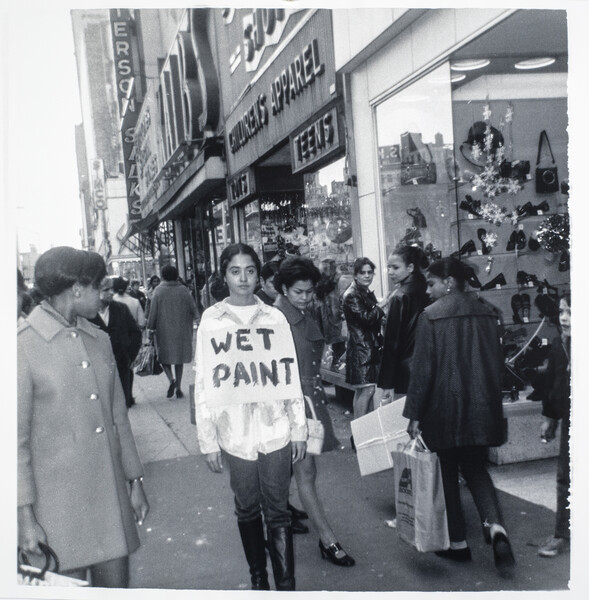 JH: From Picabia’s monkey portrait of famous artists in 1920 to Daniel Buren’s striped sandwich boards in 1968 and Adrian Piper wearing a sign declaring ‘Wet Paint’ in 1970, ‘Stop Painting’ strikes me as being shot through with a kind of dark comedy that exists alongside its serious critique.

EF: Humor and irony were always very important to Fischli & Weiss [who collaborated from 1979 until David Weiss’s death in 2012] and it continues to be so for Fischli. In many ways, this exhibition is like an extended artwork. It was great fun to put ‘Stop Painting’ together, as so many of the works are simultaneously hilarious and theoretically loaded.

JH: What is the earliest painting in the show?

EF: Paul Delaroche’s ‘Cromwell and Charles I’ (ca. 1831), which includes an image of a coffin. Around 1840, on hearing about the invention of photography, Delaroche famously declared that ‘from today, painting is dead.’

JH: And the most recent work?

EF: Emil Michael Klein’s ‘Curtain’ (2021), a site-specific installation commissioned for ‘Stop Painting.’ It was conceived by the artist to be displayed in front of the central gate to the Grand Canal on the ground floor, an area that functions as a prologue to the show, with a constellation of pieces surrounding Fischli’s ‘Modellone.’ These works are not directly related to the 10 sections but each in its own way articulates something that resonates with the stories that are told upstairs. 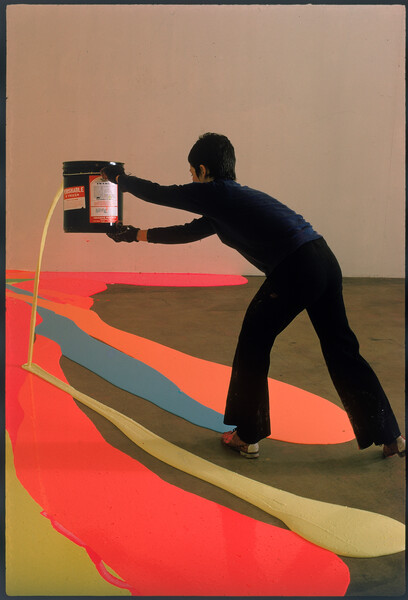 JH: As ‘Stop Painting’ makes clear, art history is much messier than we’ve been led to believe. Do you see the exhibition as both an act of resistance and a celebration of the power of the imagination?

EF: Absolutely, but it also includes a critique of the assumption of originality. Sturtevant’s 1966 remake of Jasper John’s ‘Flag’ is included, as is the work of the contemporary artist Morag Keil, who is like a new-generation Sturtevant. Her ‘Untitled (Piss Painting)’ (2014) is a remake of Andy Warhol’s 1970s ‘Piss Paintings’; she wanted to highlight the contributions of women to modern art.

JH: What kind of conclusions did you draw about the status of painting today from working on ‘Stop Painting’?

EF: Included in the show is a small collage from 1947 by Schwitters inscribed with the words: ‘Don’t Be a Dim Bulb.’ Both in English and in German (which is Fischli’s mother tongue), a ‘dim bulb’ is a ‘klutz.’ Fischli selected this piece for the show because he is fascinated by the fact that paintings are now circulated on computer and phone screens, where they always appear illuminated. Morag Keil’s ‘Eye’ paintings, made more than 60 years after Schwitters’ collage, are very resonant in this discourse. She painted two pairs of eyes in 2018 for a solo show about surveillance; in one of them you can see a tiny reflection of a computer screen, in the other, you see the illuminated phone screen reflected in the eyes’ pupils.

Fischli’s essay in the catalog ends with an image of him looking at Schwitters’ work on his laptop. He writes: ‘The collage was illuminated, and it felt like I was looking at the past, the present and the future at the same time. I saw the illuminated dim bulb.’ Perhaps this is more a comment on the direction of painting than a conclusion.

JH: As a curator, what did you learn working on the show?

EF: Lots of stories but mainly the sense that long-held perspectives can shift; also, I discovered new artists, such as the Latvian painter Boris Lurie. His ‘No’ works from the 1960s are a revelation. He had survived the concentration camps and ended up in the United States; he was very angry with the world and founded ‘No Art’. Gene Beery was another great discovery: He’s one of the first artists to use text in his paintings. They’re imbued with a caustic irony which drew interest from Max Ernst and the friendship of Sol LeWitt. 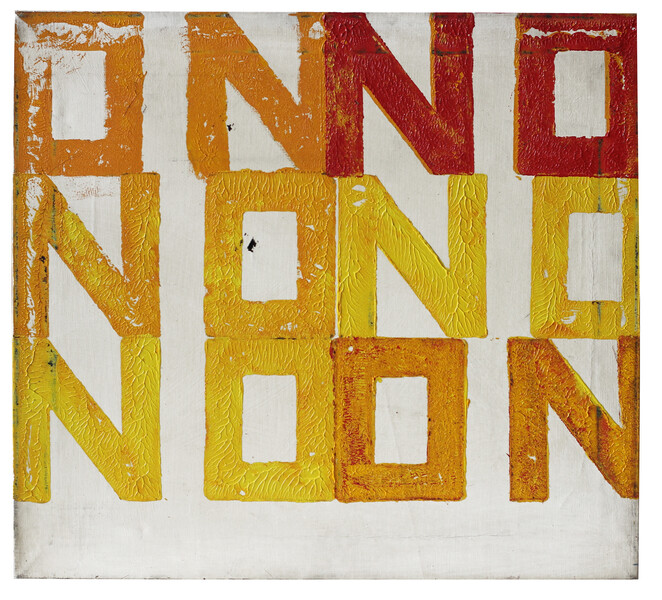 JH: Do you think Fischli is as interested in answers as he is in the act of posing questions?