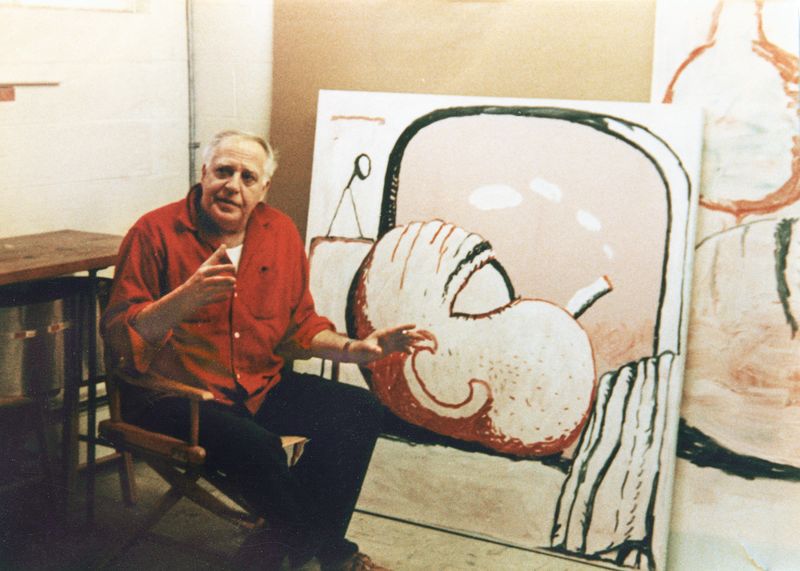 Guston’s first precocious work, ‘Mother and Child,’ was completed when he was only 17 years of age. Influenced by the social and political landscape of the 1930s, his earliest works evoked the stylized forms of Giorgio de Chirico and Pablo Picasso, social realist motifs of the Mexican muralists, and classical properties of Italian Renaissance frescoes of Piero della Francesca and Masaccio that he had seen only in reproduction. Painted in Mexico with another young artist, the huge fresco ‘The Struggle Against War and Fascism’ drew national attention in the US. Guston’s success continued in the WPA, a Depression-era government program that commissioned American artists to create murals in public buildings. While not widely known today, the young artist’s early experiences as a mural painter allowed a development of narrative and scale that he would draw upon in his late figurative work. 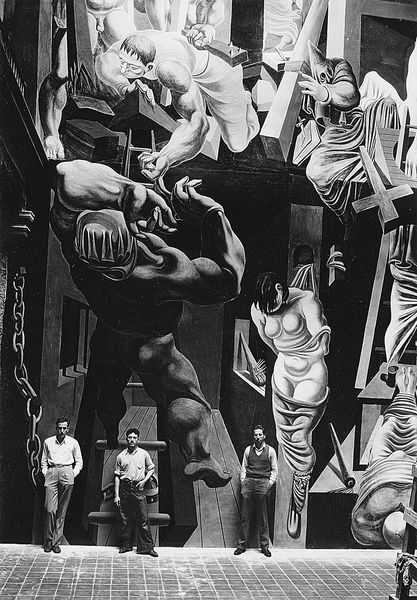 Easel Painting
In the early 1940s, as the WPA program was ending, Guston found work teaching at universities in the Midwestern United States. In his studio, he was working in oils on easel paintings that were more personal and smaller in scale, focusing on portraits and allegories, like ‘Martial Memory’ and ‘If This Be Not I.’ His first solo exhibition in Iowa was well received, and within a few years, he was offered his first solo show in New York City. Guston was awarded a Prix de Rome, allowing him to leave teaching and spend a year in Italy, studying firsthand the Italian masters he loved.

By time he had finished ‘The Tormentors,’ Guston’s move to abstraction was all but complete. On his return from Italy, he continued dividing his time between the artists’ colony of Woodstock in Upstate New York and New York City, which was then emerging as the center of the postwar art world. He rented a studio on 10th Street, where abstract expressionists Jackson Pollock, Willem de Kooning, and Mark Rothko also worked. 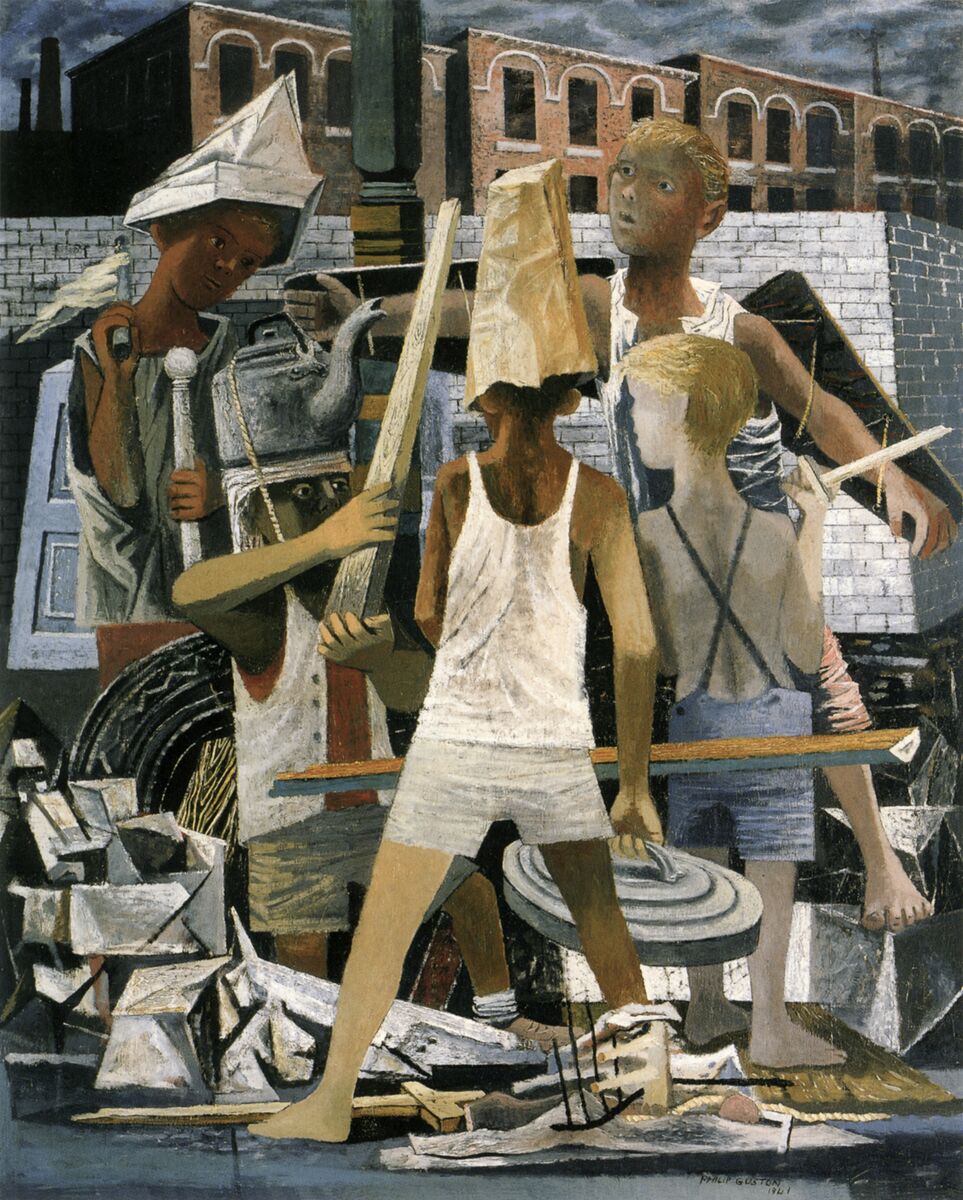 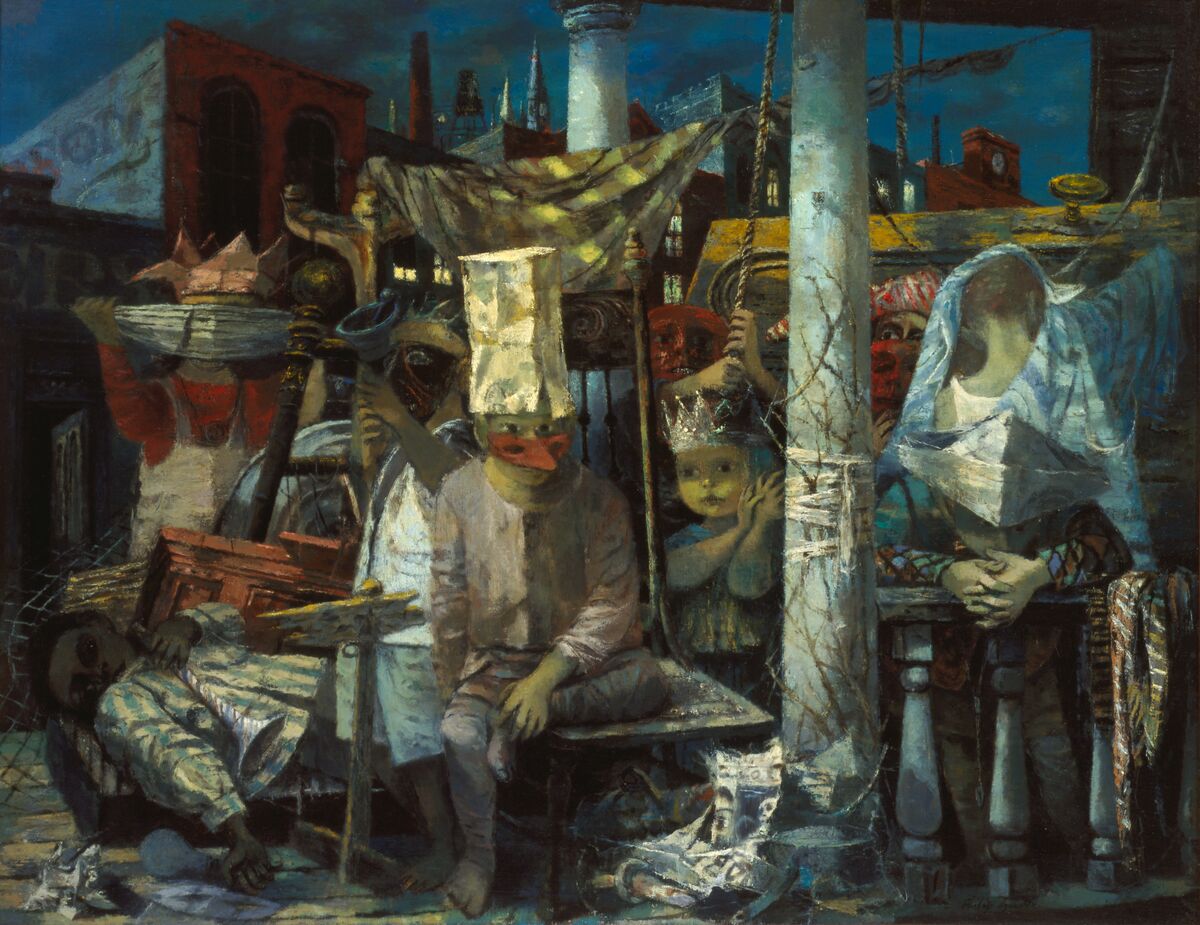 Philip Guston, If This Be Not I, 1945 © The Estate of Philip Guston. Courtesy of Mildred Lane Kemper Art Museum 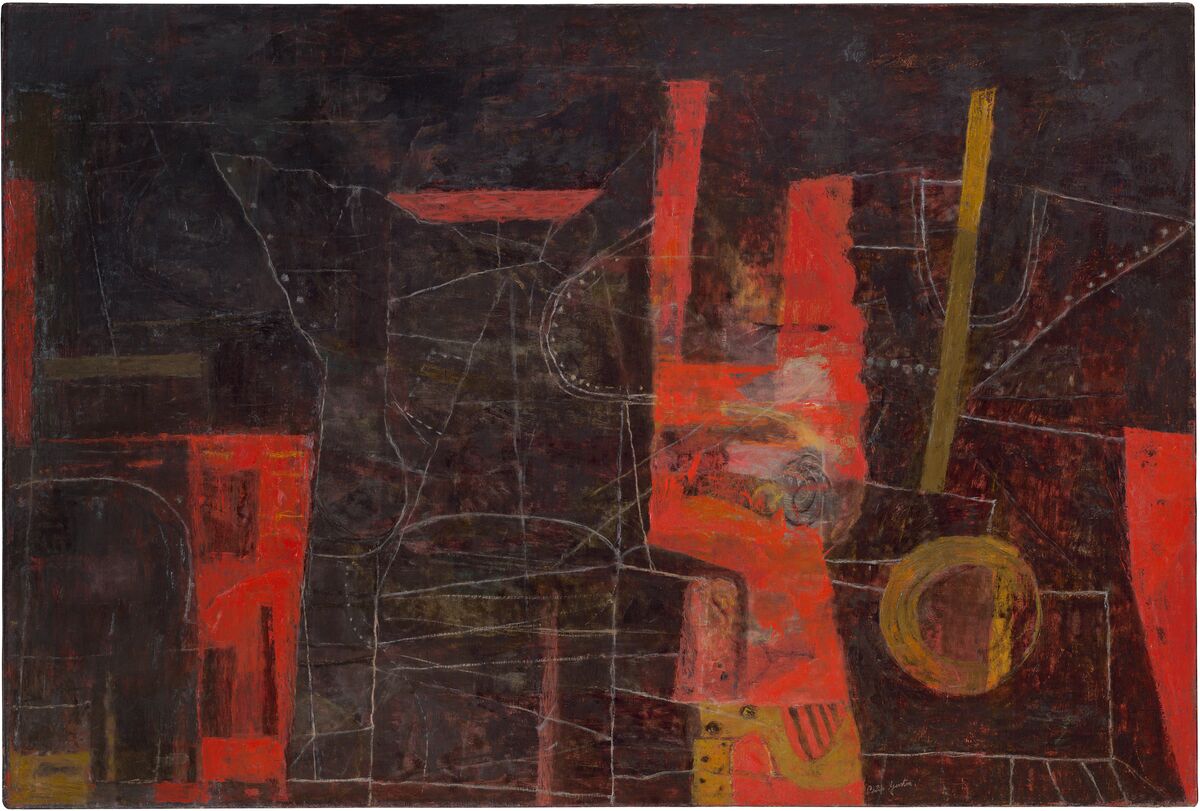 Abstraction
Guston’s abstract paintings and drawings were anchored in a new spontaneity, freedom, and an intense engagement with the act of creation itself. In the early 1950s, Guston’s atmospheric abstractions invited superficial comparisons with Monet, in works like ‘Painting,’ but as the decade progressed, he worked with heavier impasto and brooding colors, as in ‘Native’s Return.’ 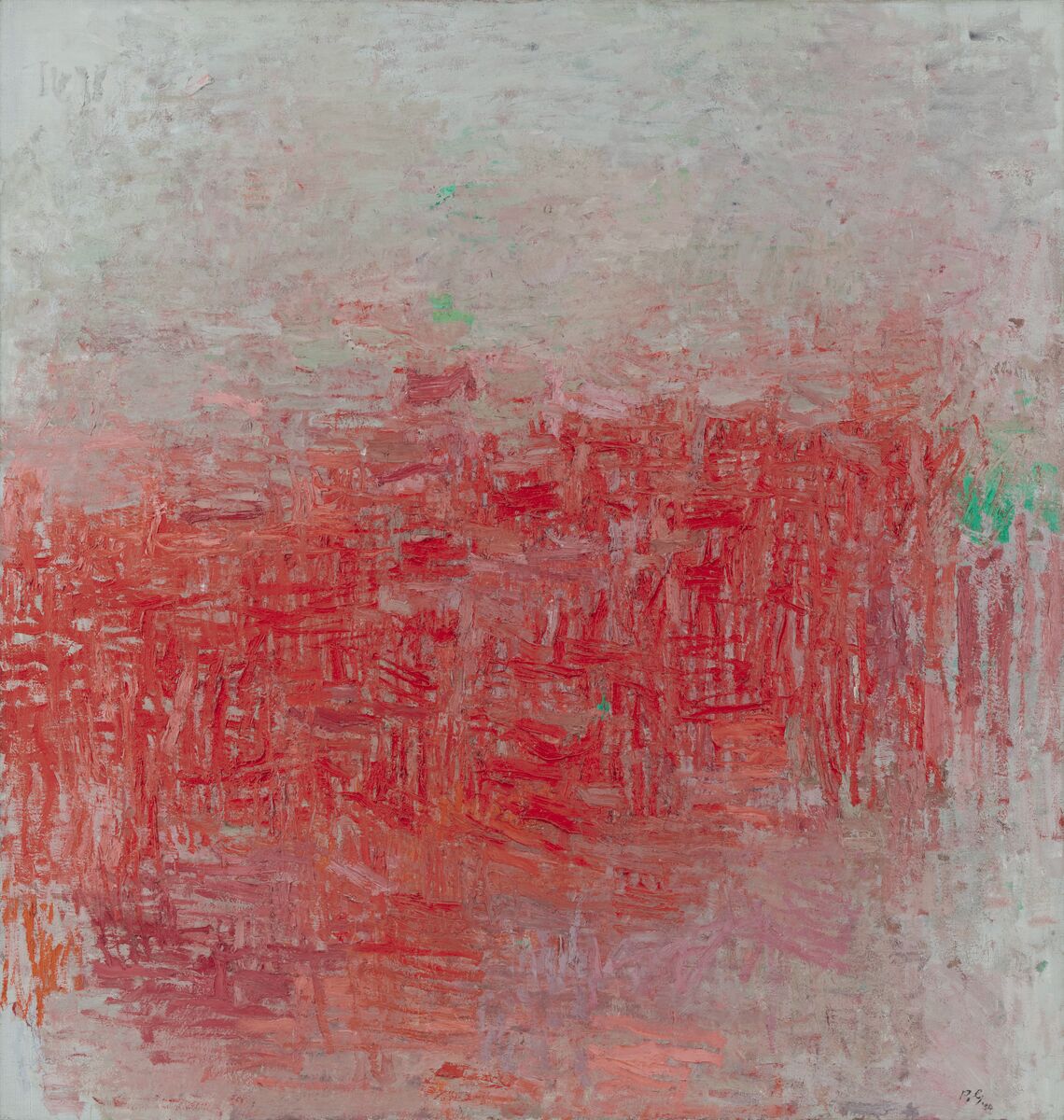 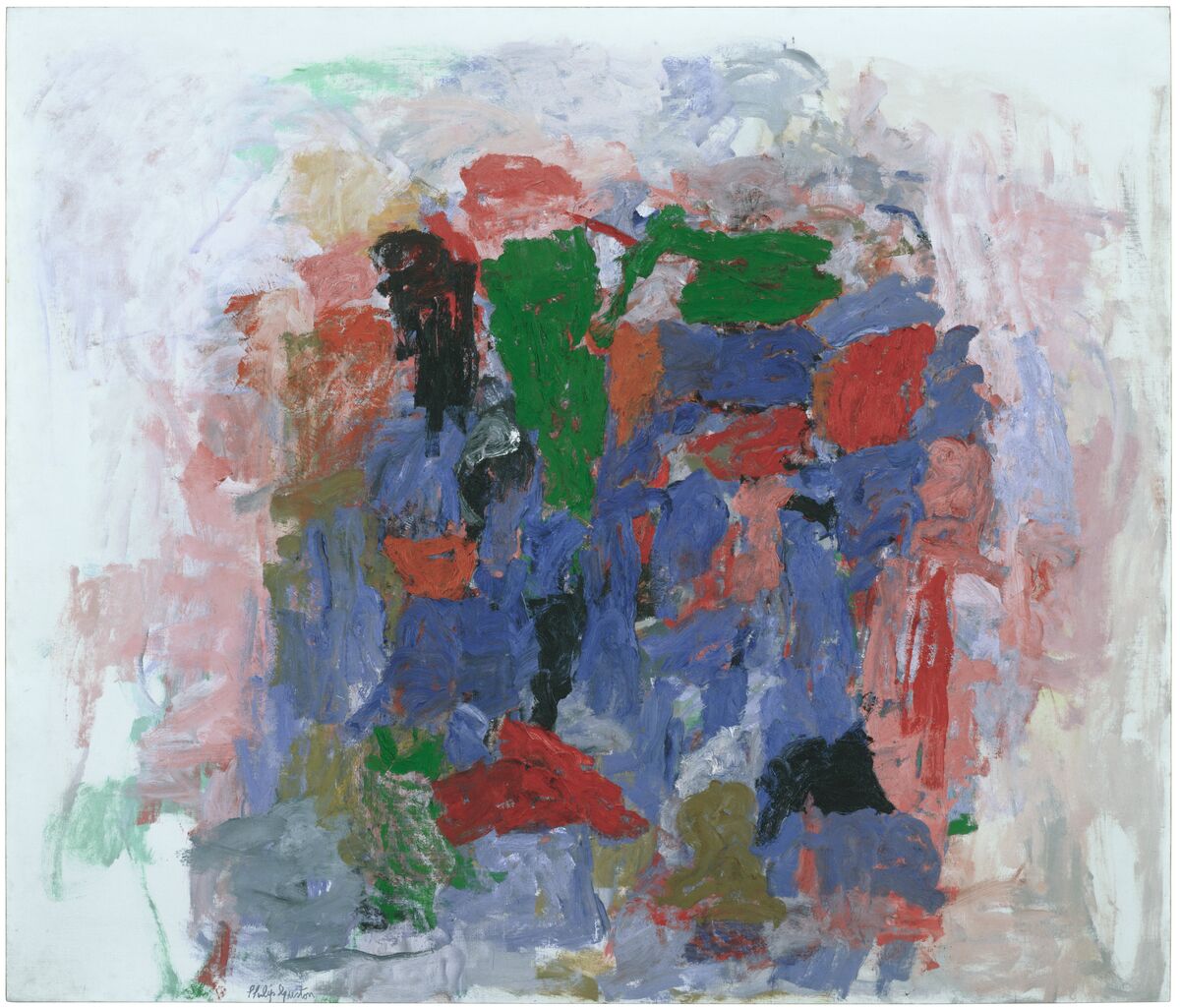 The 1960s was a period of great social upheaval in the United States, characterized by assassinations and violence, by civil rights and anti-war protests. ‘When the 1960s came along I was feeling split, schizophrenic,’ Guston later said. ‘The war, what was happening to America, the brutality of the world. What kind of man am I, sitting at home, reading magazines, going into frustrated fury about everything—and then going into my studio to adjust a red to a blue?’ 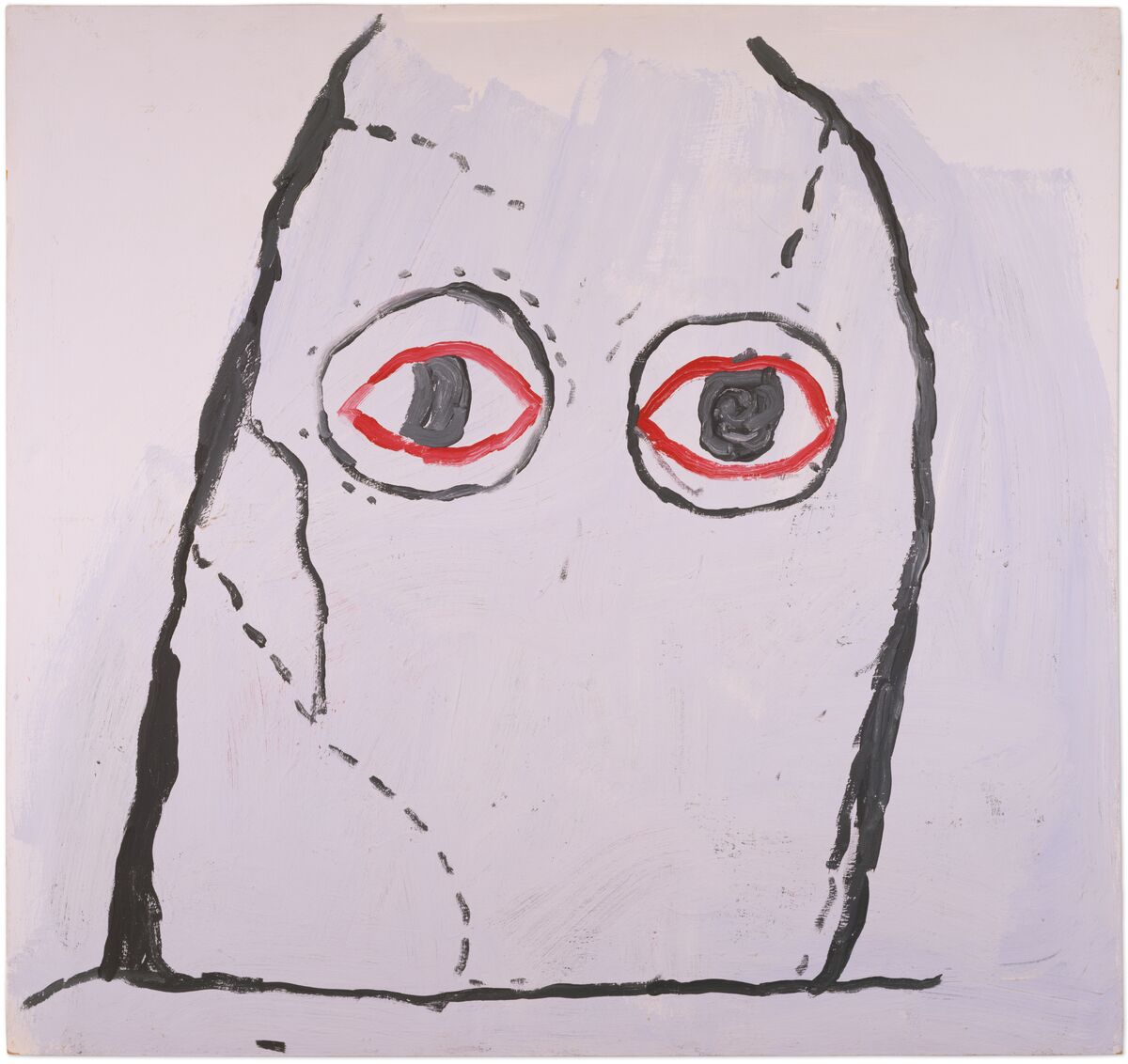 He began by exploring ordinary objects, developing a personal lexicon of light bulbs, books, clocks, cities, nails in wood, cigarettes, and shoes. In the larger works that followed, he introduced surreal motifs, peopling his new world with strange, hooded figures in cartoonish form. In part, they were related to the Ku Klux Klan, an American white supremacist group with a long history of lynching and racial violence. Not only evil, but also vulnerable and even humorous, the hoods can also be seen to represent the masks we wear in public, the contradictions of human nature, and the artist himself, as in ‘The Studio.’ 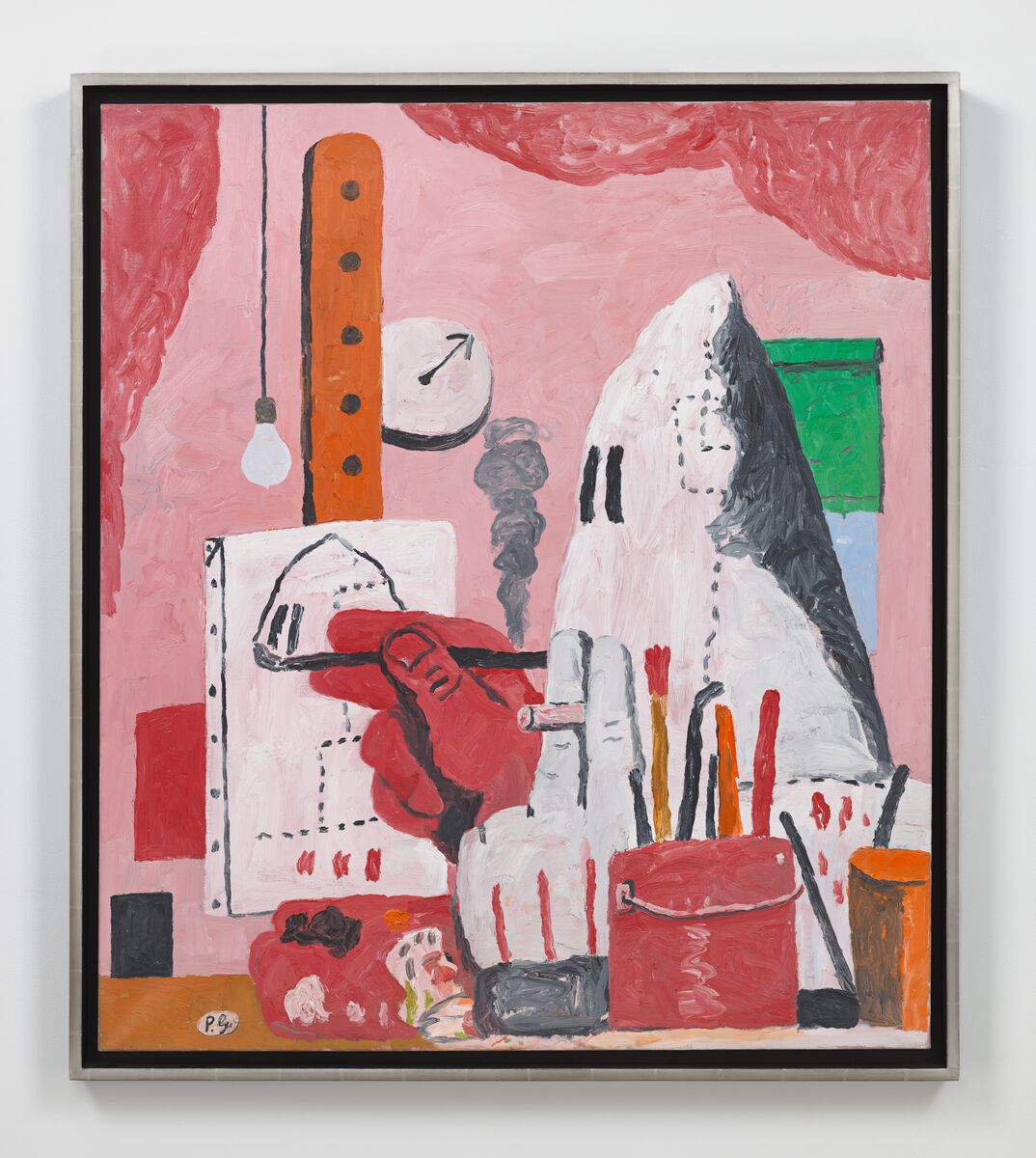 The Late Work
By 1972, the hoods were off. Guston’s expressively rendered, painterly work of his last decade became more overtly autobiographical in nature, featuring the recurring reclining figure of the artist as a hood or bean-like head with an enormous open eye. There were tender portraits of him with his wife Musa, like ‘Couple in Bed’ and ‘Source.’ 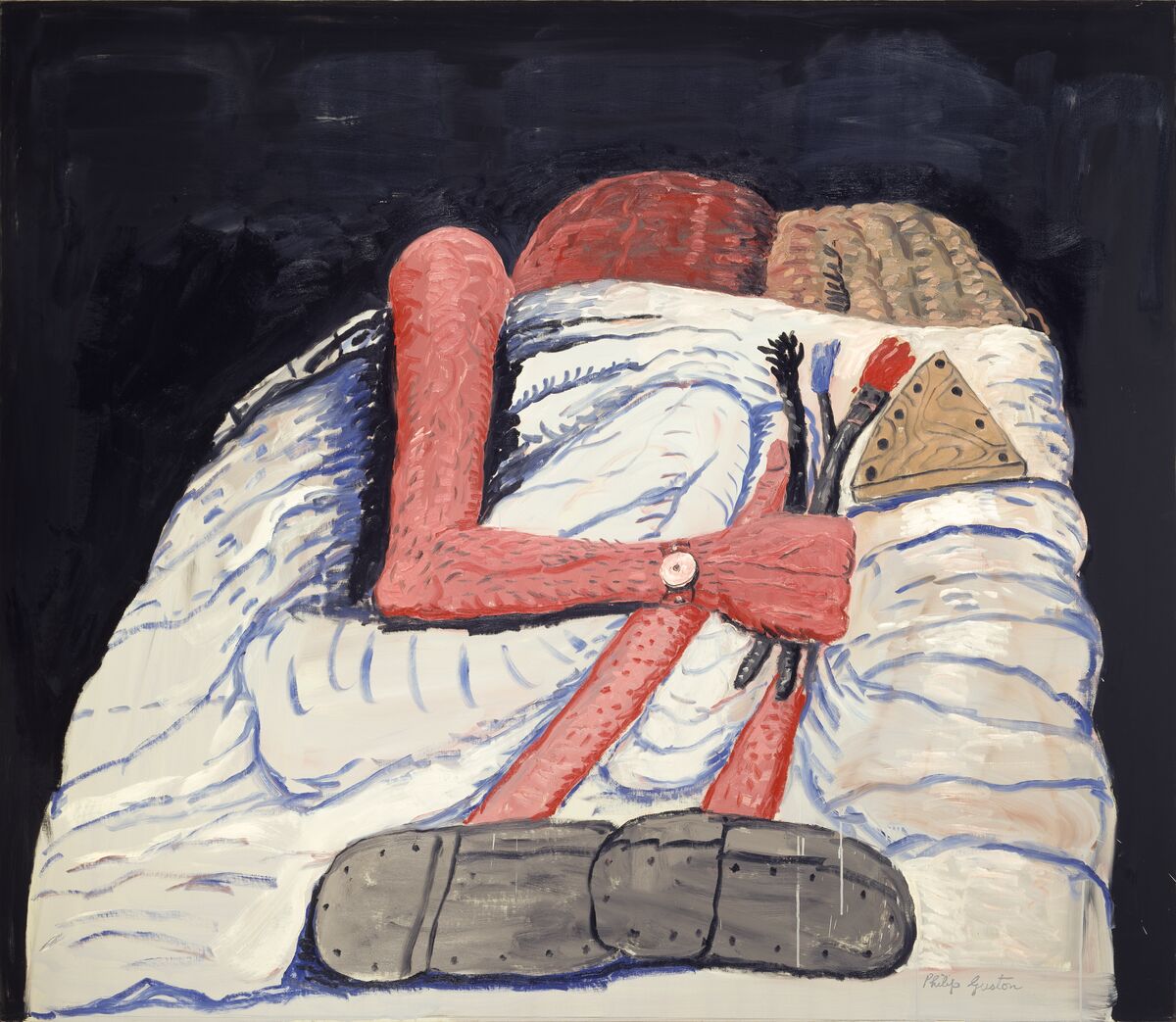 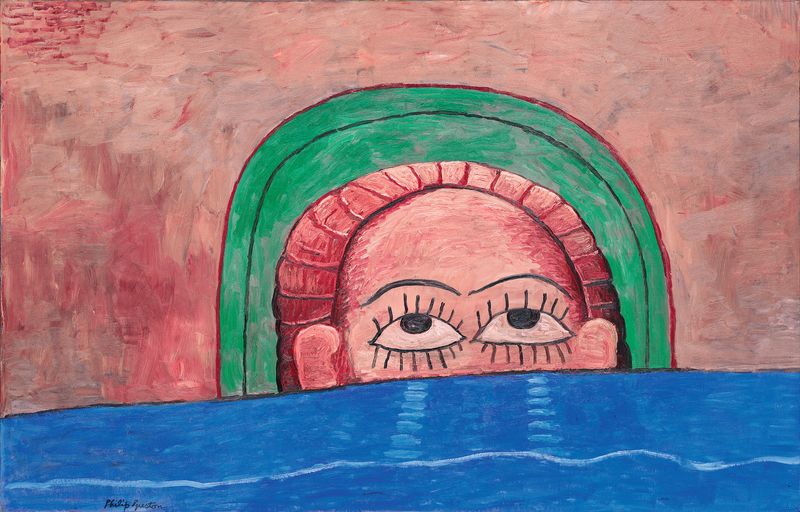 Motivated by internal forces, Guston’s last works possessed a mounting freedom, unique among the artists of his generation. By the mid-1970s, the strange iconic forms emerging from the paintings were unlike anything previously seen in art. ‘If I speak of having a subject to paint,’ Guston wrote in a studio note, ‘I mean there is a forgotten place of beings and things, which I need to remember. I want to see this place. I paint what I want to see.’
As in the early murals, allegories of horror and war are evident, for example, in ‘Pit.’ But all is not bleak; the works contain humor, pathos, even transcendence, as in ‘The Line.’ 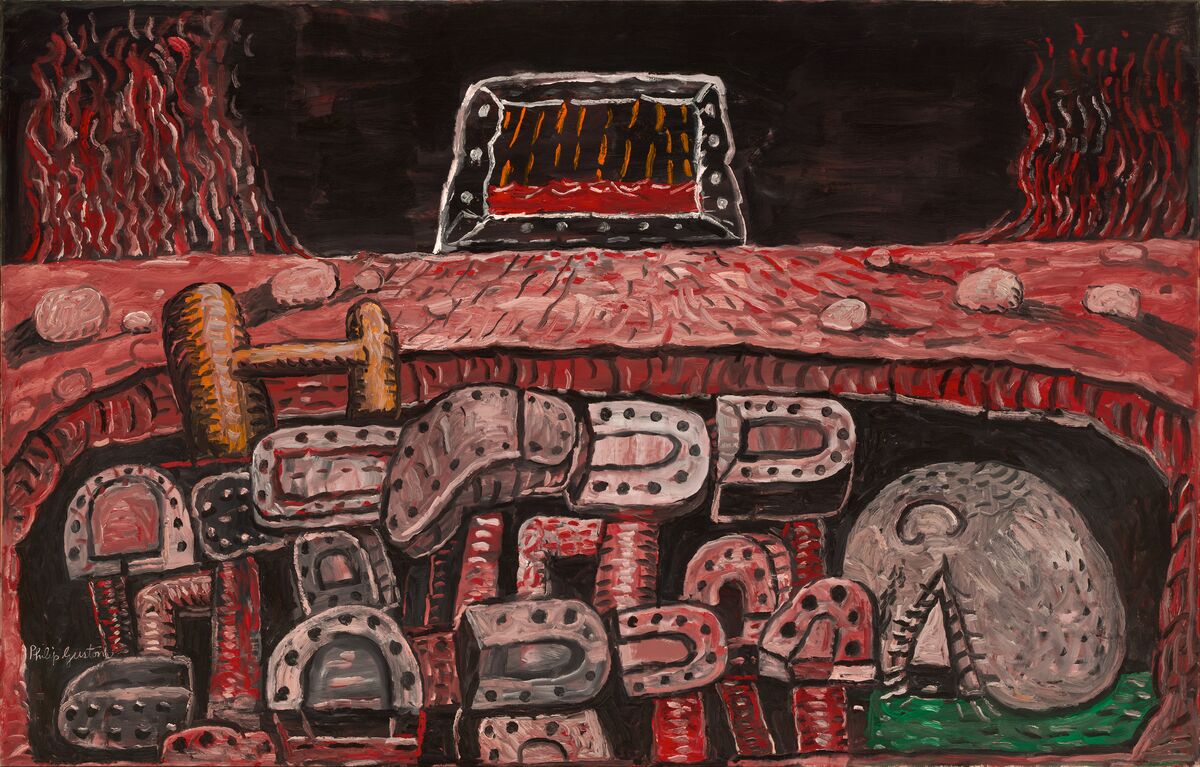 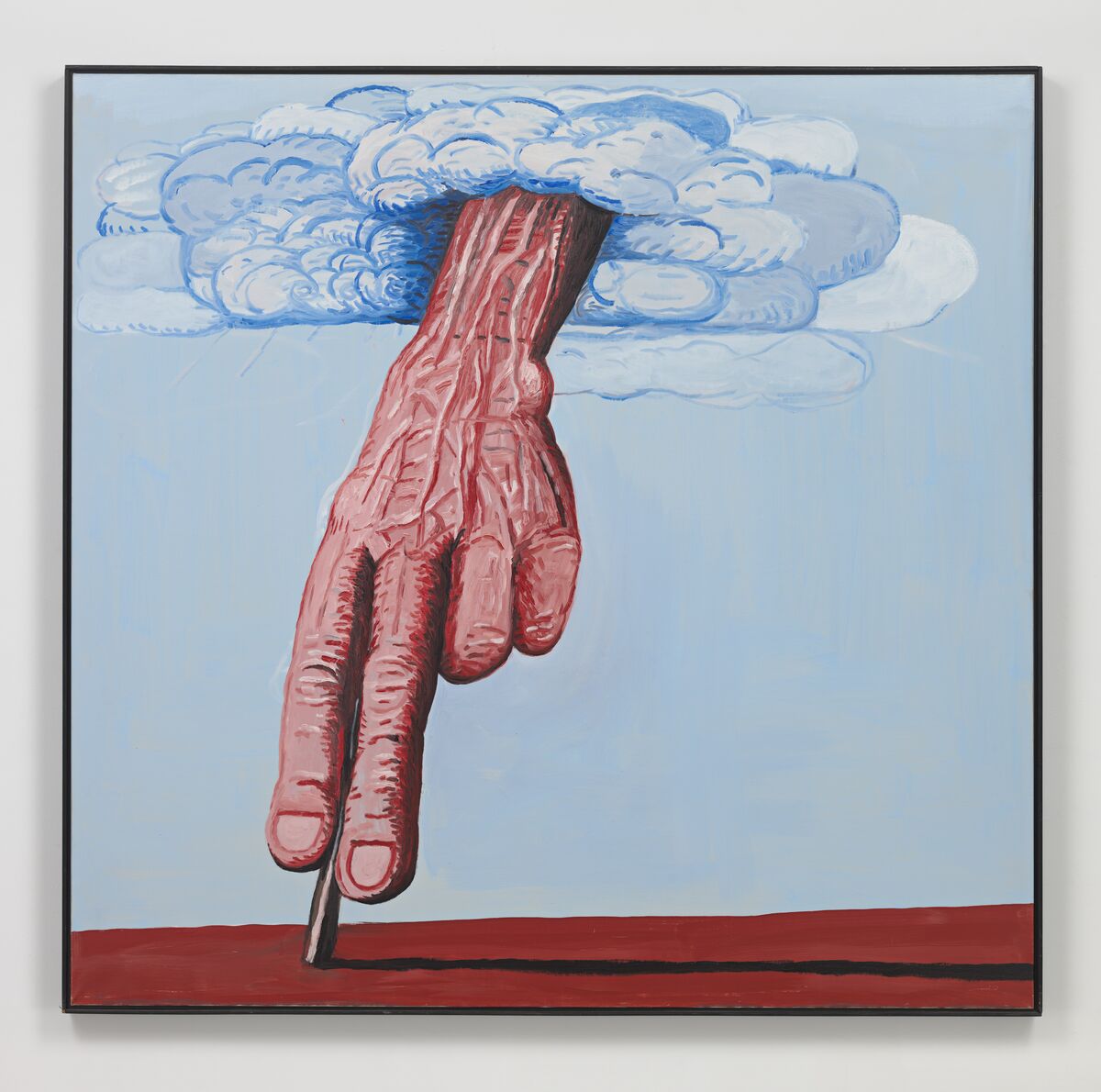 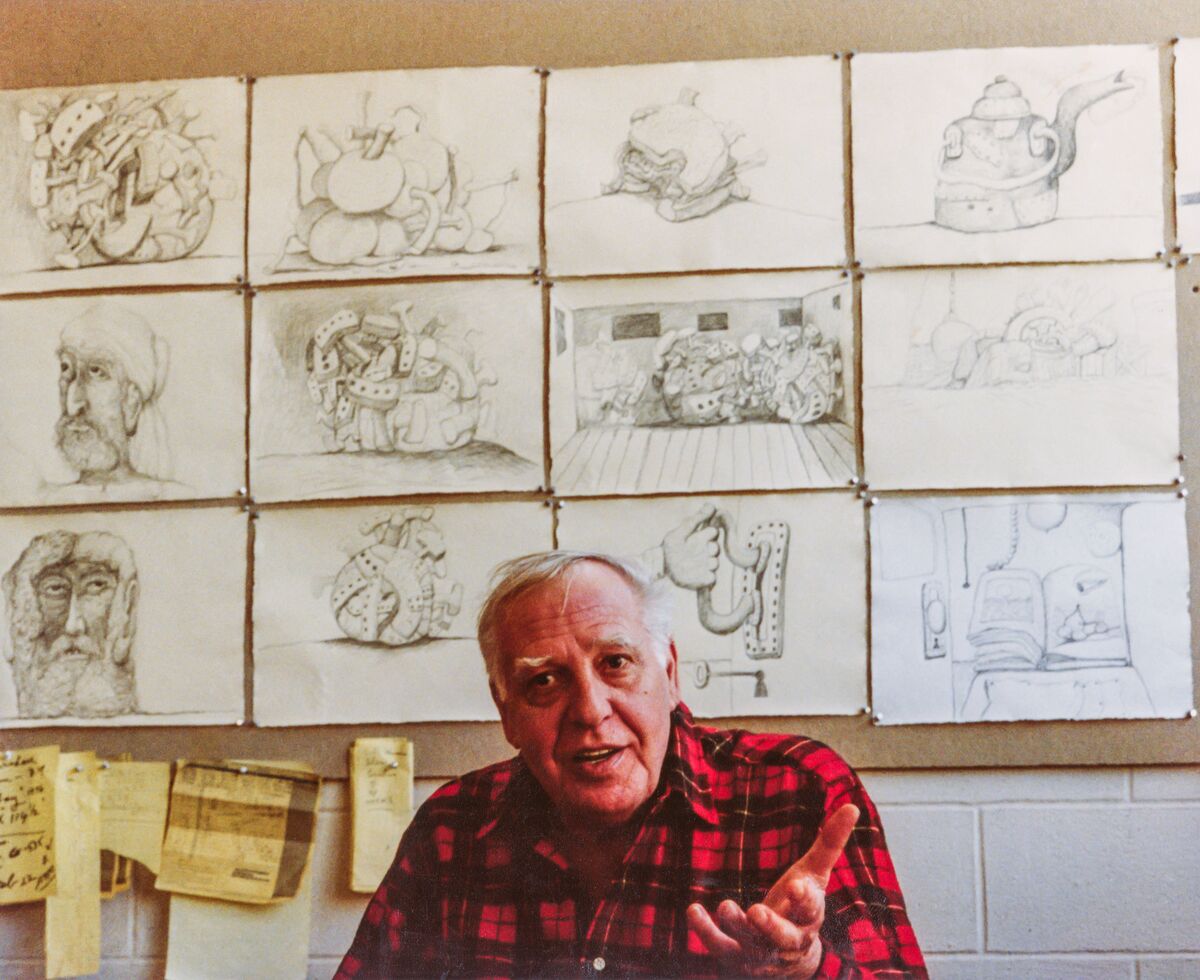