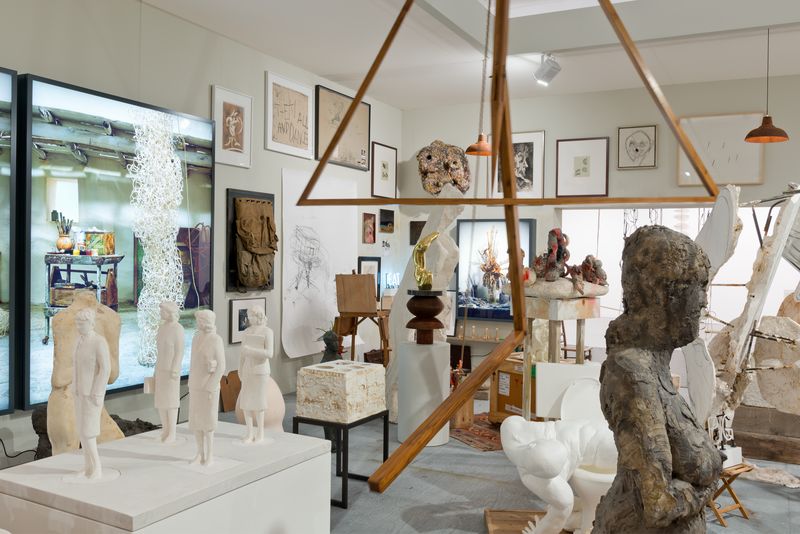 On the final day of the residency, the curators formed a public symposium: ‘Curating Private Art Collections’. The panel, each sharing their personal experiences and extensive knowledge, explored the practicalities, pleasures and politics of curating private collections in today’s cultural landscape, and what it means for the future. The symposium was chaired by art critic and journalist, Louisa Buck.

Wendy Chang has been the Director of the Rennie Collection since 2006 and is Founding Director of Rennie Museum. She formalized operations of the collection and established all aspects of the museum’s operations to support the bold and rapid growth of both. Under her stewardship, the museum has staged a diverse array of complex exhibitions with artists such as Martin Creed, Lara Favaretto, Mona Hatoum, and Kerry James Marshall. To realize the museum’s mandate of providing accessibility to arts and culture, she developed its internship, education and engagement programs. She also serves as catalogue series editor and lead designer, overseeing all facets of the publication program.

Moore has over twenty years of experience in contemporary art, holding curatorial positions at the New Museum, Andy Warhol Foundation for the Visual Arts, and the 8th Gwangju Biennial. She has curated exhibitions of work by Donald Judd, Charlotte Posenenske, Peter Roehr, Charles Atlas, Ellen Altfest, Erika Vogt, and Stanya Kahn. She curated the group exhibition ‘Pictures from the Moon: Artists’ Holograms 1969–2008’, organized the New Museum’s presentation of ‘Rosemarie Trockel: A Cosmos’, and co-curated ‘NYC 1993: Experimental Jet Set, Trash and No Star’. Moore received an M.A. from the Center for Curatorial Studies, Bard College, NY, and a B.A., cum laude, in cultural anthropology from Wake Forest University, NC.

Skarlet Smatana is director of the George Economou Collection. Since taking this position in 2012, she has honed the objectives of the collection and spearheaded its exhibition program, contextualizing it within twentieth-century art historical and contemporary discourse. She often partners and collaborates with major public institutions and private foundations worldwide to promote publicly exhibited collections as well as philanthropic and lending initiatives to support contemporary artists.

Before joining the George Economou Collection, Smatana worked at the Peggy Guggenheim Museum in Venice as well as at leading contemporary art galleries, among them Pace Gallery, New York; Richard Gray Gallery, Chicago; and, as director, at L&M Arts, New York. Throughout her career in galleries and independently, she has built some of the most important collections worldwide and advised prominent institutions in the United States. Smatana has an MA in art history, theory, and criticism from the School of the Art Institute of Chicago, focusing on postwar and contemporary art with a specialization in German art.

The legacy that Ursula Hauser has created as a collector and woman in the arts was the starting point for a...

Keith Tyson discussed his work with Ben Luke in the setting of the exhibition at Hauser & Wirth London, featuring...

Matthew Spender and Andrew Graham-Dixon on ‘Arshile Gorky: The Plow and the Song’

A remarkable addition to the ever-evolving scholarship on Arshile Gorky, ‘The Plow and the Song: A Life in Letters...