We are honored to announce worldwide representation of renowned American artist Pat Steir. Among the great innovators of contemporary painting, with a lifelong commitment to drawing and printmaking, Steir first came to prominence in the late 1970s and early 1980s for her iconographic canvases and immersive wall drawings. By the late 1980s, her inventive approach to painting—the rigorous pouring technique seen in her Waterfall works, in which she harnessed the forces of gravity and gesture to achieve works of astonishing lyricism—attracted substantial critical acclaim. Informed by a deep engagement with art history and Eastern philosophy, and a passion for artistic advocacy in the both the visual and literary realms, Steir’s storied five-decade career ­­continues to reach new heights through an intrepid commitment to material exploration and experimentation.

‘Pat created a visual language wholly her own—a new abstraction that embraces anima and chance, that embeds poetry and philosophy in a practice which also encompasses writing, performance, and mentoring.’—Marc Payot

‘Over the past thirty years, Hauser & Wirth has built a program devoted in significant measure to women who have changed the course of art and art history,’ says Marc Payot, Hauser & Wirth President. ‘And so it is a particularly great honor and pleasure to welcome Pat Steir to the gallery. Emerging out of Minimalism and Conceptualism, Pat created a visual language wholly her own—a new abstraction that embraces anima and chance, that embeds poetry and philosophy in a practice which also encompasses writing, performance, and mentoring. She is simultaneously a living legend and a contemporary innovator, at once a peer of such historical masters as Eva Hesse and Louise Bourgeois, and young pathbreakers like Christina Quarles and Avery Singer. And like her teacher Philip Guston, Pat maintains a fierce devotion to the medium of painting itself as a conduit not only for technical experimentation but for spiritual awareness. We look forward to collaborating with her in the months and years ahead, and to building upon the great work of the gallerists who have been part of Pat’s career over the past decades.’

Steir’s first exhibition with Hauser & Wirth and first show in New York since 2017, ‘Blue River and Rainbow Waterfalls’ will open on 10 November 2022 at our 22nd Street location. The presentation will span the building’s entire ground floor space with a series of vibrant new large-scale paintings. A program of performances celebrating the new work is planned to accompany the exhibition. 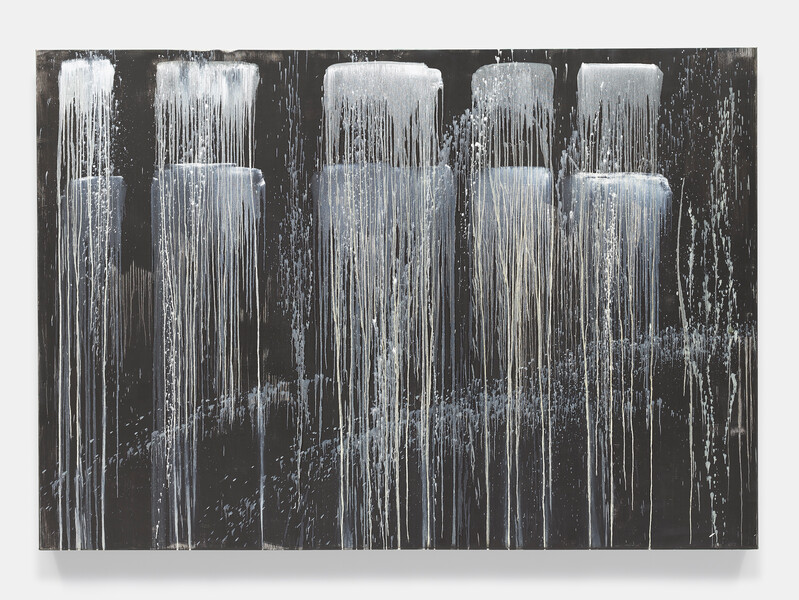 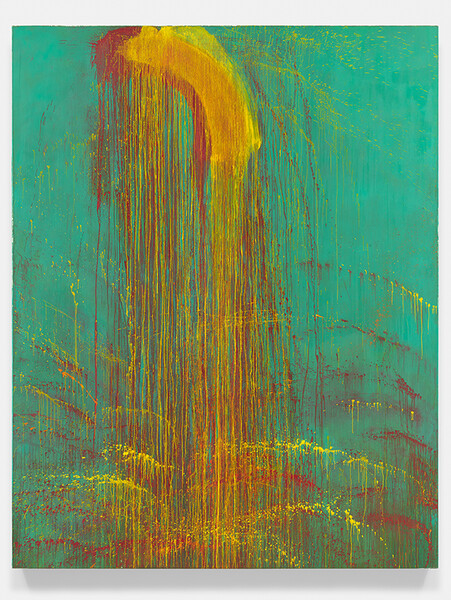 Steir has been the recipient of numerous awards and accolades over the course of her career, including the prestigious National Medal of Art presented to her on behalf of the United States Department of State under President Obama’s administration in 2017. Steir’s work has been the subject of significant solo exhibitions and site-specific installations at major museums and foundations across the globe, including ‘Silent Secret Waterfalls’ (2019) at the Barnes Foundation in Philadelphia, ‘Color Wheel’ (2019–2021) at the Hirshhorn Museum and Sculpture Garden, Smithsonian Institution, Washington, DC, and her first comprehensive survey in China at the Long Museum (West Bund) in 2021. In 2013, the National Academy Museum, New York, presented ‘Pat Steir: Blue River’ and in 2010, the exhibition ‘Pat Steir: Drawing Out of Line’ traveled from the Museum of Art, Rhode Island School of Design, Providence, Rhode Island, to Neuberger Museum of Art, Purchase, New York. In 1998 Steir created the site-specific installations ‘Likity Split’ and ‘Ghost Moon Mountain Water’ for The Whitney Museum of American Art and P.S. 1 Contemporary Art Center, Long Island City, respectively. In 1987, Steir installed a solo exhibition titled ‘Self-Portrait: An Installation’ at the New Museum, which was curated by the museum’s founder and former Director, Marcia Tucker. Other major shows include: The Irish Museum of Modern Art (1996, 1994); Centre National d’art Contemporain de Grenoble (1992); Musee d’art Contemporain, Lyon, France (1990); The Baltimore Museum of Art, Maryland (1987-1988); the Rijksmuseum, Amsterdam, The Netherlands (1987); The Brooklyn Museum, Brooklyn, NY (1983); and the Contemporary Arts Museum, Houston, TX (1983), among others. 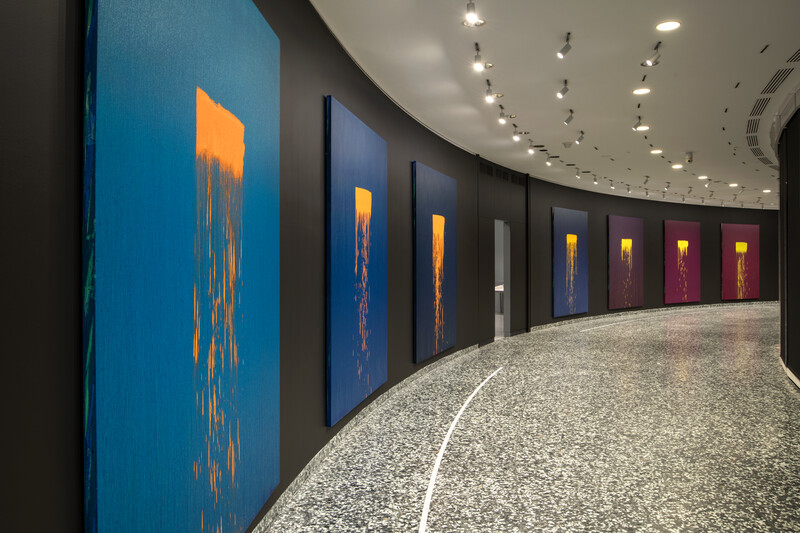 Born in Newark, New Jersey in 1938, Steir attended New York’s Pratt Institute from 1956-58, where she took painting classes from Richard Linder and Philip Guston. Steir transferred to Boston University College of Fine Arts where she studied art and philosophy from 1958-60, before returning to Pratt, where she received her BFA in 1962. It was during her days as a student that she first became acquainted with many of the most influential conceptual and minimalist artists of the day, figures that would become Steir’s lifelong friends such as Sol LeWitt, Brice Marden and Lawrence Weiner. Shortly after graduating, Steir was invited to participate in her first group exhibition at The High Museum in Atlanta and only a year later was featured in group shows at the Philadelphia Museum of Art and The Museum of Modern Art, New York. These shows helped position her among the first group of women artists to gain recognition in the male dominated art scene of the time, paving the way for numerous long-term relationships with well-respected international galleries. In the mid-1960s, Steir worked as a freelance illustrator before being offered the role of Art Director at Harper and Row Publishing Company in New York. In the early 1970s she taught illustration at Parsons the New School for Design and then painting at the California Institute of the Arts where Ross Bleckner and David Salle were among her students. Steir simultaneously worked as an editor for Semiotext(e) magazine and was a founding board member of both the Printed Matter bookshop and the landmark feminist journal Heresies.

Steir also became friends with artists Mary Heilmann and Joan Jonas in the early 1970s, participating in an early improvisational film by Jonas and joining Heilmann and artist Joan Snyder in a three-person exhibition at the Paley & Lowe gallery. It was also during this time, at the invitation of Douglas Crimp, that Steir first travelled to New Mexico to visit artist Agnes Martin, a trip she would continue to make over many years until Martin’s death in 2004. 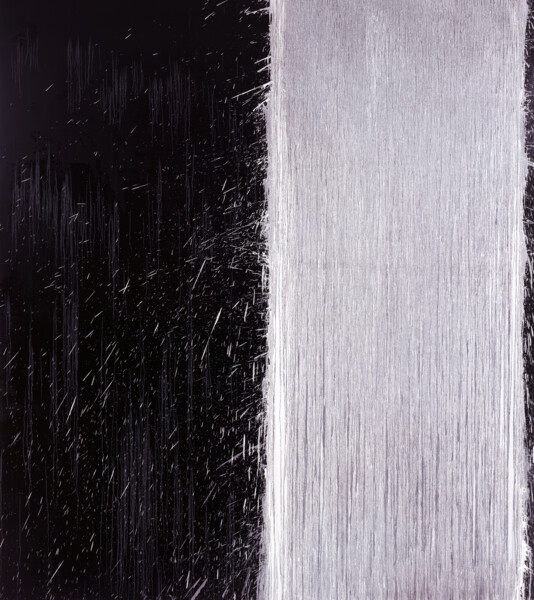 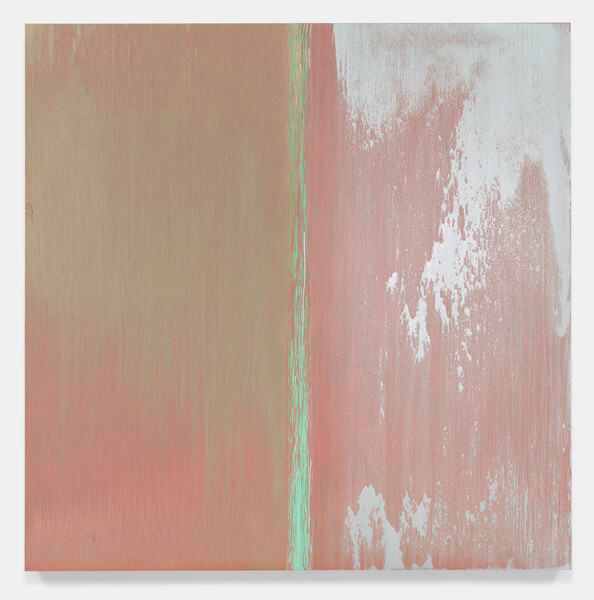 In the mid-1970s Steir showed her first iconic and critically acclaimed series of works—paintings of roses that were then completely crossed out, transcending the divide between figuration and abstraction. She also began to make site-specific wall drawings and room-sized installations. These installations transformed her paintings into a three-dimensional experience formed by light and line, allowing the viewer to step out of their reality and into an illusionary world connected to both nature and the progression of time. As Steir has said, ‘Installation allows the artist to paint out of the painting and into space and the viewer to move from space into a painting—the space where the act of painting takes place is in the imagination of the viewer.’

In the late 1970s, after traveling extensively both in the United States and in Europe, Steir and composer John Cage became good friends while working together at Crown Point Press. His embrace of chaos or randomness and non-intention in creative activity became especially influential on her practice, inspiring her to see new potential for accident and chance in artmaking. In the early 1980s, Steir made her first trip to Japan where she became fascinated by Japanese woodcuts and Chinese literati landscape painting, particularly ancient Chinese Shan shui (mountain water), which evoked nature rather than trying to replicate it. By the late 1980s, Steir began experimenting with the technique that has since come to define her oeuvre, no longer strictly using a brush which allowed her to take herself out of the picture. Subject to the influence of time, the finished work is what gravity and the weight of the paint has made. They are not paintings of landscapes but landscapes in and of themselves, an image that both evokes a waterfall and is a waterfall. As much as Steir’s process embraces chance, she retains complete command over the basic parameters. It is a harmonious collaboration between control and chaos, ‘chance within limitations.’ A remarkable synthesis of conceptualism, minimalism, and abstraction that challenges the postwar American canon, Steir’s practice remains limitless.