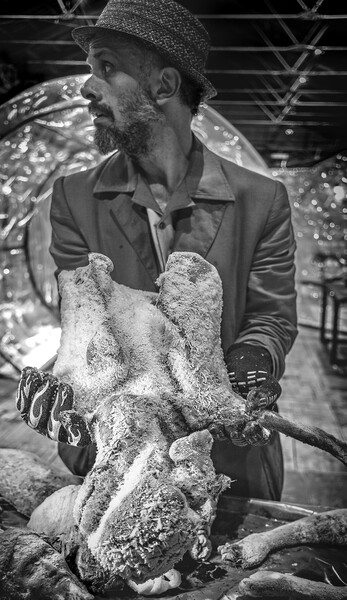 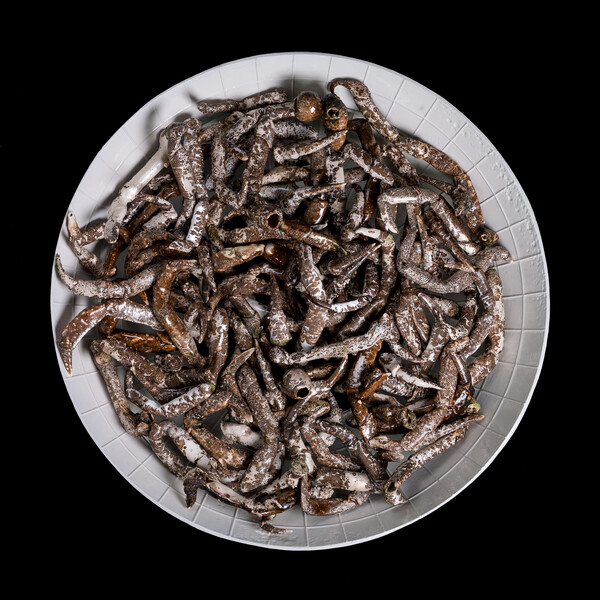 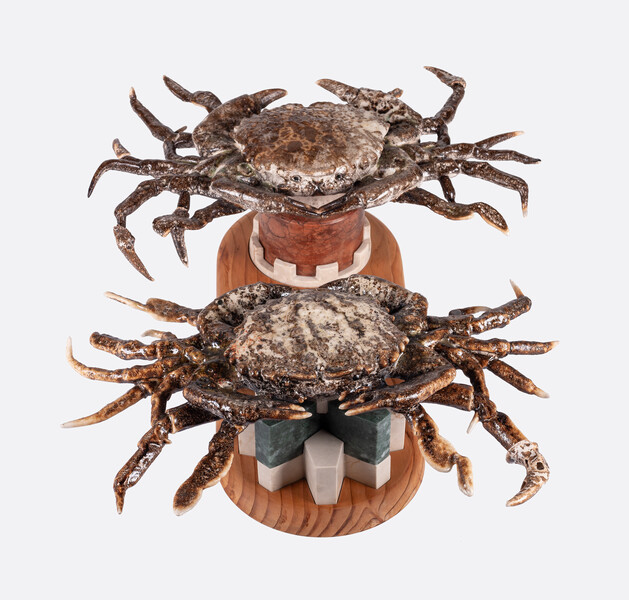 At the upcoming 2019 edition of ADAA’s The Art Show in New York, Hauser & Wirth’s stand will be filled with Cuoghi’s recent sculptures that subvert and recreate animal forms. The booth’s focal point is a series stemming from his major 2016 sculptural project entitled Putiferio, which translates from Latin as ‘to bring out the odors of hell.’ Developed as a commission for The DESTE Foundation on the Greek island of Hydra, the works of Putiferio utilized inventive firing processes in self-made kilns heated to 1200° celsius. Using a modified three-dimensional printer, Cuoghi photographically scanned crabs bought from the local fish market to create prints, adjusting the file to create the desired shape before printing in clay. Cuoghi experimented with countless firing techniques in order to create variations in the color and texture of his sculptures. The artist spent months developing his kilns in the Milanese countryside before reconstructing them on Hydra for the subsequent ‘cooking’ of the crabs.
The booth will also showcase ‘Ether en Flocons’ (2016 – 2018), an installation comprised of 10 birds made of agar-agar and pork gelatin. Each bird is derived from the same mold – of an enlarged, dead red-breasted bird – in which Cuoghi pours his substance and waits for it to solidify. Bacteria and mold develop over time as the bird is left vulnerable to the elements and further transformed by the natural environment. Cuoghi halts the process through a technique called lyophilization, in which the bird is first frozen at extreme temperatures and then placed into a freeze-dryer for one month, transforming the formerly unstable gelatin into a stabilized sculpture. The bird is then consolidated into a vacuum machine, and the work is only complete when Cuoghi adds his final embellishments. This highly ambitious and time consuming project, made in collaboration with a team of conservators, marks a new territory for Cuoghi and is emblematic of his continued devotion to exercises in metamorphosis. 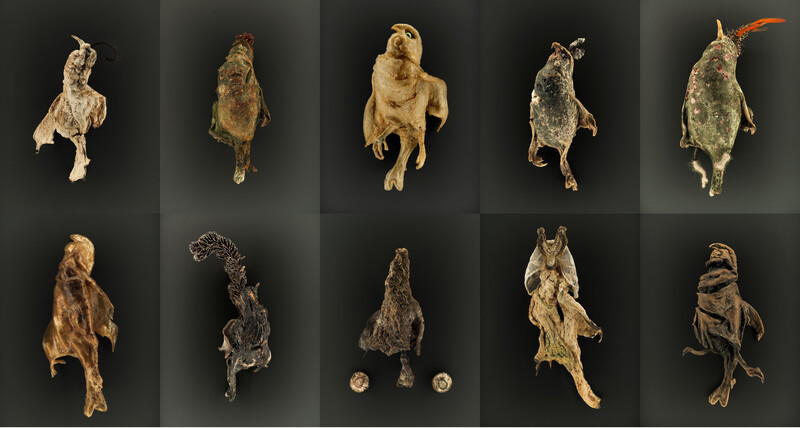 Cuoghi’s practice lies somewhere in the crux of learning and obsession. His most renowned ‘performance’ began in 1998 when, at the age of 25, Cuoghi prematurely aged himself into an older man of 67 years, seeking to ‘become’ his father. Over the next 7 years, Cuoghi accelerated the appearance of his age rapidly and without the use of prosthetics – instead, he increased his weight to over 300 pounds, dyed his hair grey, grew a large beard, and developed chronic dark circles and eye bags. The portrayal had lasting effects – although he eventually reverted his appearance, the physical trauma would permanently damage his health. This prolific period was depicted in his film, ‘The Goodgriefies’ (2000), which highlighted the complexities of Cuoghi’s new identity as an old man, interspersed with altered iconic cartoon characters – a dystopian blockbuster-style movie which gained him international attention. Cuoghi would reject the notion that this incredible feat can be defined simply as an artwork or performance; rather, it falls at the intersection between art and life, where time and perception, nature and technology, and history and myth collide to form new investigations into humanity.
Cuoghi’s body has long been subjugated to transformative practices. As a student, he grew his fingernails for eleven months until they became claw-like, hindering his movement, ability to write, and risked him accidental harm. Soon afterwards, he engaged in an endurance performance which required him to wear Schmidt-Pechan prism goggles, inverting and overturning his sight to cause severely distorted vision that prevented him from participating in daily activities (the visual experience being so overwhelmingly exhausting) for five days. During this period of self-imposed handicap Cuoghi drew self-portraits and wrote poems, cataloguing the experience into works on paper, a series entitled Il Coccodeista (1997). 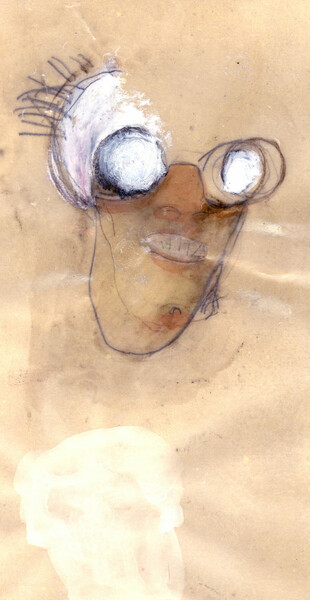 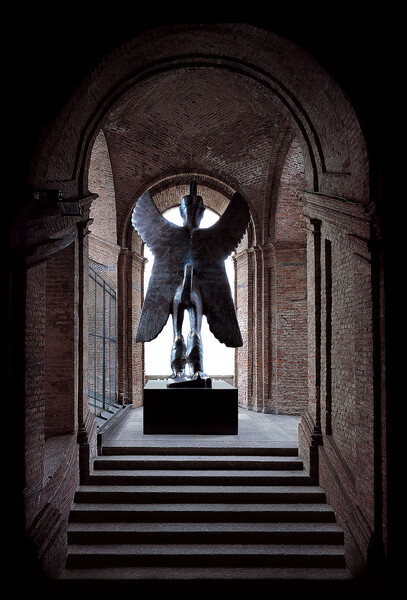 In the early 2000s Cuoghi began new investigations into transformations, observing and examining himself and those around him. These works marked new investigations into transformations as Cuoghi continued to observe and examine himself and those around him. He began making delicate drawings in pencil, charcoal, and ink on thin sheets of acetate tracing paper layered behind thick glass, capturing imagined portraits of strangers, landscapes, and deceased relatives, many of whom were based on the artist’s visual memory. Hybrid forms emerged, such as the imagined, Godzilla-like figure in ‘D+P(XVIAc)mm/ac’ (2004), or the collector Dakis Joannou partially mutated into a bird-like figure in ‘MEGAS DAKIS’ (2007). In contradiction to the stark violence of the earlier photographic images, these works contain a certain tenderness; despite depicting a monstrous figure, the female Godzilla holds no threats. 2005 marked a transformative period – Cuoghi shed the skin of his father, reversing his temporary time travel to regain his younger form. Subsequent self-portraiture would document this period to reveal the physical toll and mental exhaustion of his seven-year-long endeavor. Otherwise Cuoghi would use self-portraiture to explore alternative identities, picturing himself as a modern saint, an intellectual, or a gang member.
Despite never being trained in music, between the years 2005 and 2008 Cuoghi embarked on an exploration of sound, creating three large-scale audio installations. Described as ‘rhapsody of injustice,’ the three resulting installations, ‘Mbube,’ ‘Mei Gui,’ and ‘Šuillakku,’ were drawn from a range of influences: from folk songs of South Africa, to the banned music of Mao Zedong’s China, to the hypothetical sounds of the fallen Assyrian city of Nineveh, each influence finding common ground in their origin as songs of injustice or protest in their native countries. Assyria became a source of obsession for Cuoghi and he fully immersed himself in research, learning the culture, religion, and tradition of this ancient civilization. The Assyrian demon-god Pazuzu – with the claws of a raptor, the body of a human, the head of a dog, and the wings of bird – emerged as a recurring figure, the exemplary hybrid subject of Cuoghi’s twenty-foot high sculpture at the Castello di Rivoli outside Turin in 2008. Pazuzu’s iconographic figure has continued to multiply throughout Cuoghi’s work of the past decade, evolved into an array of almost unrecognizable, often hidden forms rendered in experimental materials – a crab-like creature made in ceramic, a whale’s tail in black polyurethane, or a four-headed man suited in rope and bamboo. Thus, Cuoghi has chiseled within his own history a symbolic and wholly unique language of form, materiality, and identity.
–
Hauser & Wirth will make a solo presentation of works by Roberto Cuoghi at ADAA’s The Art Show, Park Avenue Armory, New York NY, 28 February – 3 March 2019.