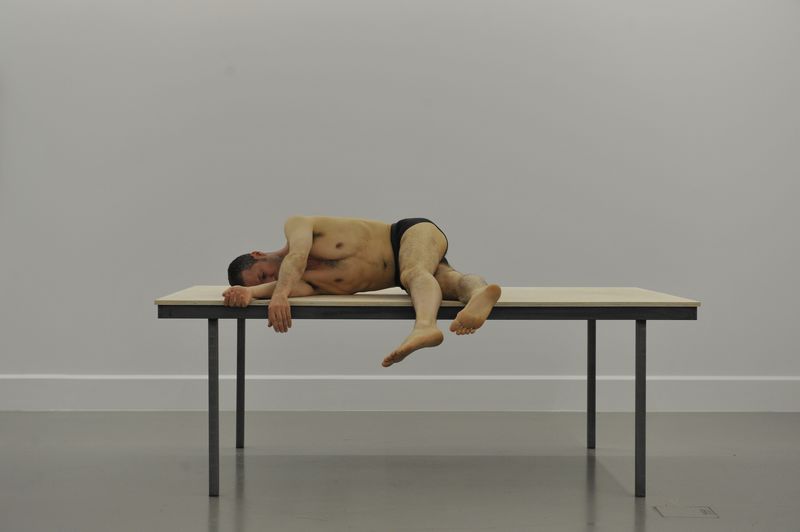 For her first solo exhibition in Istanbul, ‘The Wound,’ Belgian artist Berlinde De Bruyckere filled three floors of the contemporary art space Arter as well as the historic Çukurcuma Hammam with her signature pseudo-anatomical sculptures, including four new works.

As suggested by the exhibition’s title, recurring aspects in her oeuvre—peeled skin, open wounds, morbid flesh tones—were on display, most boldly realized in the site-specific ‘-009-,’ 2011–12, a suite of sculptures resembling raw tree limbs and human bones leaning in a vitrine placed in Arter’s window and thus seen by thousands every day on one of the busiest streets in the world. This piece is solemn and disorienting, like much of the artist’s work; and those who stepped in to see the rest of the exhibition were exposed to layers of sensations reminiscent of the experience or anticipation of loss, a ritualistic passage through other bodies and souls, in which hints at repressed feelings and acts were abundant. Two graceful colts, placed gently on wooden tables, seemed to lie dying; titled ‘Lost II’ (2006–2007), and ‘Lost III’ (2008), and made from the skin of actual baby horses who had died, epoxy, wood, and metal, they were a haunting sight. On another wooden table across from ‘Lost II,’ French dancer and choreographer Vincent Dunoyer, invited by De Bruyckere and the Vehbi Koç Foundation to participate in ‘The Wound,’ repeated his performance ‘Loan’ (2012), every day at regular intervals during the exhibition; it was a gentle homage, a somber salute to the dead animal.
SaveSave
SaveSave 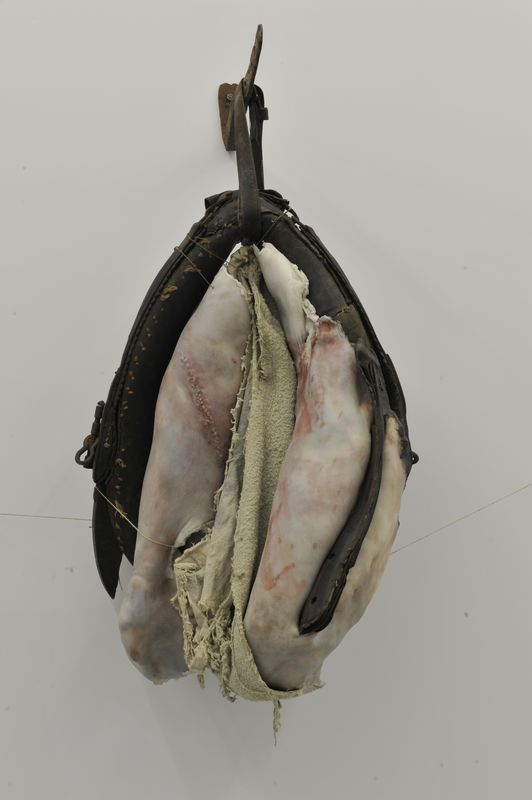 Another new series, ‘The Wound’ (2011–12), was inspired by an unusual document De Bruyckere encountered during her research in Istanbul: an album of nineteenth-century photographs of Ottoman women after ovarian surgery, posing with their excised tumors in laboratory jars. The resulting series of three sculptures seems to recall the sufferings of Christ, evoking pierced flesh laid open, linen cloth barely covering the body in pain, and what the show’s curator, Selen Ansen, called ‘invisible suffering.’ In an interview, the artist expressed empathy for the women in the photographs, covered in traditional garb, and opening their navels for the photographer. This gesture exemplifies the scientific approach to illness, which works by compartmentalizing a problem in a framed area in isolation from the rest of the body and its surroundings.
At the Çukurcuma Hammam, a nineteenth-century bathhouse reopened to the public for this exhibition, two new pieces were exhibited: ‘We are all flesh (Istanbul)’ and ‘Actaeon,’ both 2011–12. The former bore connotations that ranged from cleansing to bodily pleasure; it was a more lustful elaboration of the earlier work ‘We are all flesh,’ on display at Arter. The second piece in the hammam was a representation of the Greek myth of the metamorphosis of hunter into prey, a tale of seduction, power, and misunderstanding: When Actaeon sees the goddess Artemis bathing, she transforms him into a stag, whereupon he is torn apart by his own dogs.
If the hammam is to be regarded as a space for the care of the body—the architecture may resemble a shrine, but the body inside is actually the temple—these pieces had indeed found their right place. The entwined headless horses of ‘We are all flesh (Istanbul)’ and the antlers and bones of ‘Actaeon’ suggest encounters with bodies. The hammam became a common ground where basic human needs, strengths, and weaknesses could be traced. As usual with De Bruyckere, the works are loaded with historical, cultural, and iconographic references that might necessitate deciphering. But together, they touch the basic chords of sentiment in all of us in the face of love, desire, and loss.