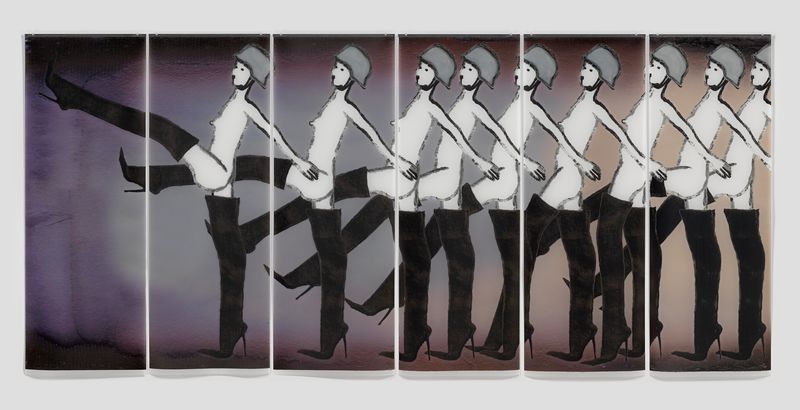 Ida Applebroog’s imagery has always been forthright, direct, unequivocal: blunt in its protest against life’s absurdity and the abuse of power.

Nothing smoothed over, no lulling nuances. Its force lies in its apparent simplicity, the almost cartoon-like reduction of what Max Kozloff once called the “little butcheries” of life to their fewest essential distinguishing features. And yet this simplicity or pictorial minimalism also renders her work ambiguous, filled with unarticulated resonances beyond what’s immediately apparent.
A few years ago, Applebroog described her work as ‘situated structures rather than paintings—although they have been done with paint, they become something else, totally.’ Rarely has that been truer than in her most recent exhibition, “The Ethics of Desire,” and not just because she mostly eschewed paint this time in favor of ink, which she applied to translucent Mylar sheets, mostly hanging freely from the ceiling. Each piece (with three exceptions) was a single sheet, on which she had drawn a single standing figure, larger-than-life size and nude. In one of the three multi-sheet pieces, three women sat, knees high and genitals revealed; in the other, a single helmeted, booted female nude marched high kicking in stop-motion, à la Eadweard Muybridge or Étienne-Jules Marey, from right to left across six sheets of Mylar, a sort of cross between a Rockette and a goose-stepping Nazi soldier.
As for the single figures, she made them male and female, and of various kinds and conditions: Some were disabled, one was pregnant, and so on. Their postures are supposed to evoke those used by runway models, though most wear nothing more than their shoes or socks; a few sported props that are probably rarely seen at fashion shows—handcuffs, a crucifix, crutches. I thought rather of the attributes carried by the saints in Renaissance paintings: Saint Catherine with her wheel, Saint Agatha with her tongs. Possibly funniest was the man wearing an extremely long sock on his penis. Instead of walking past these sparely delineated figures hanging on a wall, one walked among them—one more member of the crowd, so to speak, and yet, as a viewer, excluded from the crowd among which one wandered, even more of a ghost than these insubstantial figures, which tower over the scene and seem to assert themselves with such force.
SaveSave
SaveSave
SaveSaveSaveSaveSaveSaveSaveSave
SaveSave 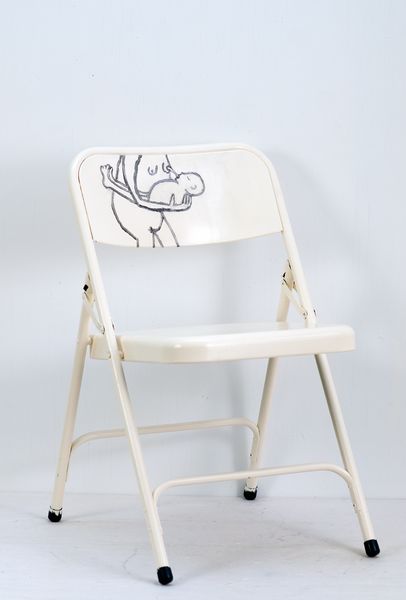 Also on view was a series called Please Don’t Sit on These Works of Art, 2014, comprising thirty chairs, the cheap folding kind, with miscellaneous images drawn or painted on their seats or backs or both: of a woman taking a bloodred shower; another nursing an oddly long-legged baby, with the milk seeming to pour from her nipple into its mouth as though from a spigot; yet another, with a flower growing out of her ass, climbing an endless ladder. Completing the show, and demonstrating the continuity within Applebroog’s work over the decades, was a 1978 video, It’s No Use, Alberto—a sequence of absurd vignettes played by shadow puppets accompanied by voice-over ditties and dialogues, such as one in which a man announces to a woman that her son has died in a car accident: He swerved to avoid a porcupine. The video is accompanied by what appeared to be the same shadow puppets mounted on pedestals. The art of It’s No Use, Alberto is deliberately primitive; today, there is a kind of refinement to the simplicity with which Applebroog adumbrates her simultaneously seductive and confrontational figures. Yet they retain the bluntness of hard fact, even if the fact itself escapes us.