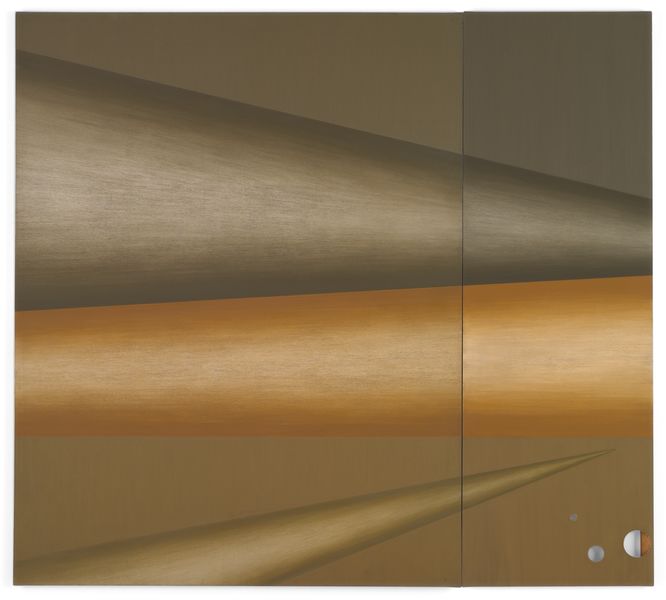 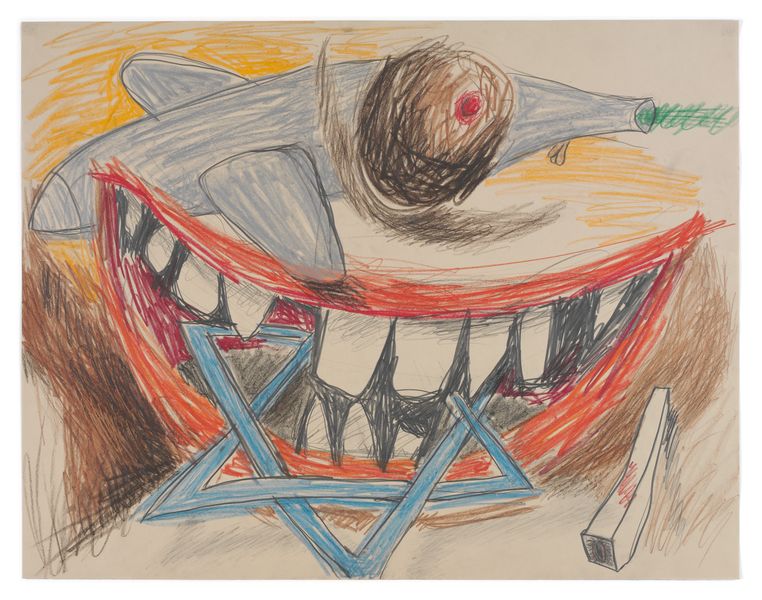 From 1963 to 1968, sexual metaphor sharpened the wit inherent in Lee Lozano’s choice of objects: the teeth, the tools, with their confused gender identities (the vagina with teeth, the penis as tool). Amongst the more or less toothless smiles of Lee Lozano’s drawings from the early 1960s, some are paired with a cigar or with rotund airplanes that penetrate the space of the canvas, admittedly-but not aggressively, rather like toys (No Tirle, 1963). For Lozano, teeth are an apparatus, a device, a marker of identity and a social tool, which the artist treats irreverently. When a mouth appears below a clownish mouth or breast, biting into a Star of David (in No Tirle, c. 1963), it is literally “cutting its teeth” on the Judea-Christian symbol-a distant family memory for Lozano who, over the years, rejected the family name (from Lenore Knaster, she switched to Lee Lozano before further contracting her name to Lee Free, then Leefer, Eefer, and finally, “E”).
Around 1964 and 1965, the screws, strands of hair, drill bits, and tubes depicted by Lozano, attracted by their cold, metallic intensity, were no doubt encountered by the artist in her daily life. At the time, Lozano lived in the Manhattan neighborhood of So Ho, at 60 Grand Street. She might have picked up these objects during walks with friends, including the artist Carl Andre and the experimental filmmaker Hollis Frampton, to the south of Canal Street, on a quest for found materials: the sidewalks there were at the time lined with various resellers, including of tools, pieces of steel and metal scraps, and broken-down pieces of boats from shipyards kept busy throughout the Korean War. The invitation to her 1966 exhibition of paintings (which included Untitled, 1965) featured a black-and-white photograph taken by Frampton, bearing the inscription “a shot of the work table in the studio of Lee Lozano, whose paintings will be shown at the Bianchini Gallery from November 5 to 30, 1966.” On the table, shot from above, we can see several tools, pliers, scissors, bolts; a label for a work to be presented in an exhibition at the Green Gallery (scheduled for the previous year, but cancelled due to the gallery’s closure); Cock, a 1964 sculpture by Carl Andre; a box of matches from Max’s Kansas City; cigarettes and a coffee mug on a stool nearby. And we can make out four Polaroid, tests taken during the photo shoot that lead to the image on the invitation. In this image, presented within another image, all of the procedures that led Lozano to create the abstract paintings included in her exhibition are made visible. 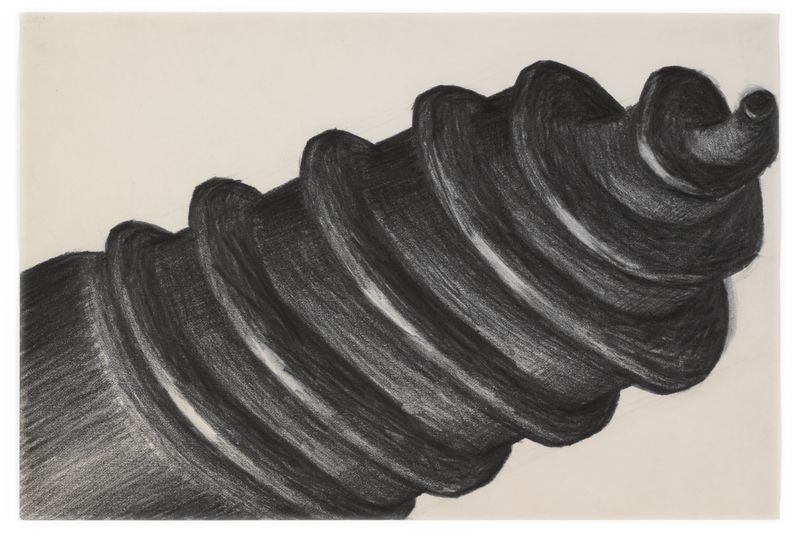 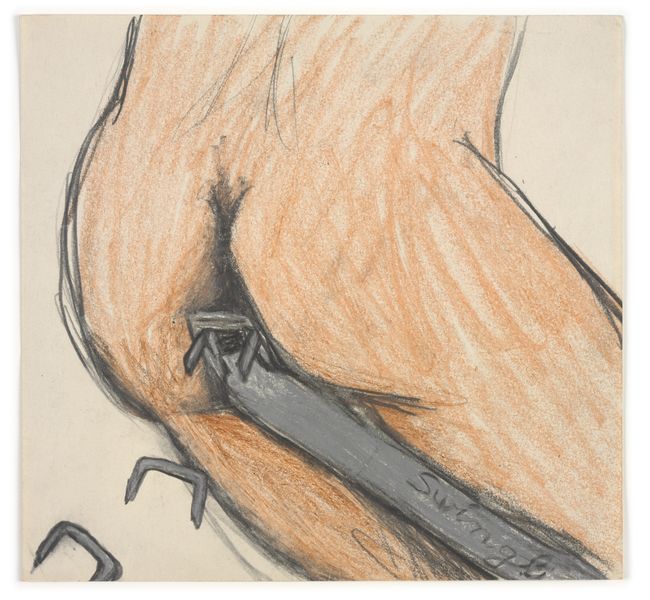 Among these procedures, one of the foremost is language. Take the title Crook, enacted in a two-part oil painting from 1968. Crook was included in a list of possible titles for paintings that Lozano wrote down in a notebook in an untitled work of 1964-67. This list begins with the subheading ALL VERBS (written in all caps, like most of Lozano’s word pieces), each verb related to the vocabulary of the worker and the tool- or machine­made. Richard Serra’s well-known verb list of1967-68 (thus, created slightly after Lozano’s) defined a program of actions that the sculptor then executed (to roll, to cut, to tear, etc.). For Lozano, on the other hand, these verbs, and their sadomasochistic connotations, describe not the project but the forms themselves, which, while abstract, relate viscerally to the human body. At the time, the artist was becoming human body.
At the time, the artist was becoming contemporaries Frank Stella and Donald Judd would declare. Lozano used housepainters’ paintbrushes, three inches wide. Applying paints with metallic oxides (her materials have been compared to “office supplies”) with these brushes creates a striated, lightly reflecting surface, its forms submitted to the push of the brush.
Lozano’s attitude towards art contrasts with that of her male colleagues. In 1970, she declared: “I will not call myself an art worker but rather an art dreamer and I will participate only in a total revolution simultaneously personal and public.” Lozano’s visual prose, her highly lucid, corrosive attitude, is reminiscent of the rage of Valerie Solanas (who killed Andy Warhol, though he recovered). In 1972, her final project consisted in disappearing-a psychological and physical retreat from the art world, accompanied by her beaming revolutionary smile.