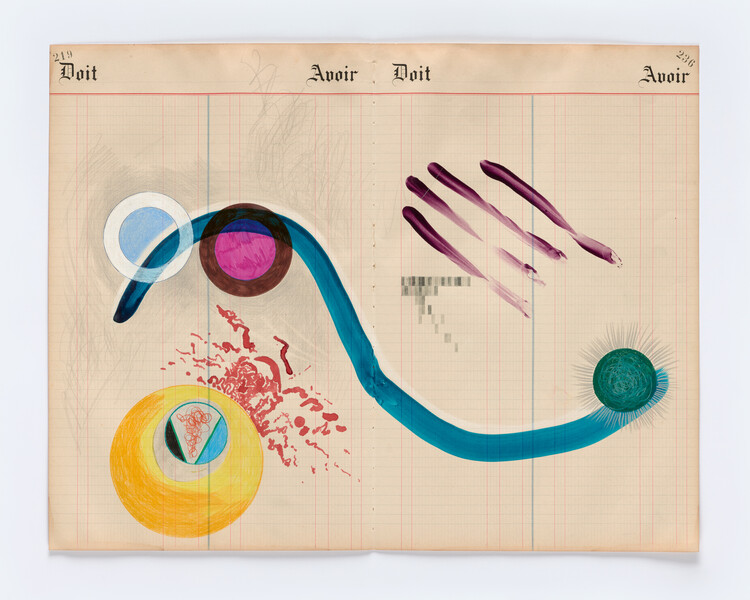 As part of our ongoing Antiphony series of commissioned poetry, a new poem by Bhanu Kapil in response to a drawing by Bharti Kher, included in her exhibition ‘The Body Is a Place,’ on view through 29 January 2023, at Arnolfini, Bristol.

I’m sick of these stories. They make me vomit. Tell me a love story.

My first love jumped on the train as it was pulling out of the station. Where did you get that water? I gave him the distorted bottle. On the 87 up to Manwa, I watched him sleep in the opposite berth.

Get off at the next stop.

Tilt the full moon a few degrees to the left and there it is, the Taj Mahal (light pink) at dusk.

High above the city, in a graveyard, he laid his head in my lap. Behind us, Lord Byron gazed at the same scene. There’s no future, there’s no past. Our love story had reached its peak. You are my home. Inwardly, I felt the instability of my conditions, a father whose instruction echoed in my eyes. I will kill you if you touch a boy. These were the words in my heart as I stroked the hair of my first love, which was unruly, blond, though he too was a foreigner, the child of parents who left the country of their birth for political or economic reasons.

First love, you returned to your room like a petulant child. I knocked on the door.

The blood was in the shape of Australia.

Imagine a flame balanced on the tip of the nose.

Honey, dump him, said your godfather, when you went to the bathroom.
He’s a philanderer, he’s no good for you, he has a weak personality, he’s—

No. Tell me a story I’ve never heard before.

Bhanu Kapil is a poet and Fellow of Churchill College, Cambridge, as well as a new Fellow of the Royal Society of Literature. Her most recent publication is ‘How to Wash a Heart’ (Pavilion Poetry), which won the T. S. Eliot Prize. Kapil is also the recipient of a Windham-Campbell Prize from Yale University and a Cholmondeley Award from the Society of Authors.