Finding Joy in the Apocalypse 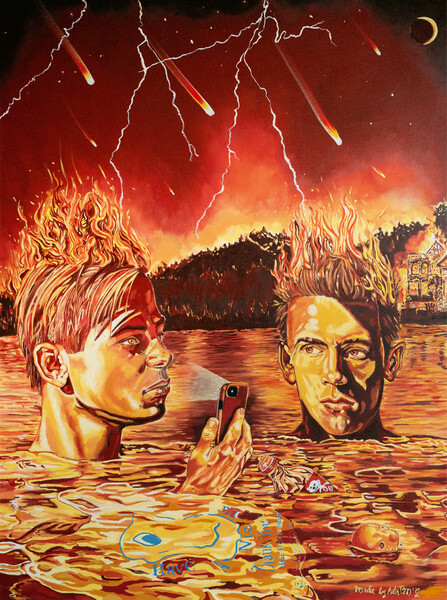 I’ve almost died five times in my life. Two times as a child, from a burst appendix. The parish priest administered last rites twice in my hospital room. In the late 1980s, I was thrown headfirst onto a highway from the back seat of a 1913 convertible Model T Ford. Time slowed as I floated over the two people in the front seat, thinking, ‘This is an accident.’ I stood up without a scratch on me. Then I almost died twice from AIDS. When I was living in a fifth-floor walkup near Times Square, sick, covered from head to toe in purple Kaposi sarcoma cancer spots, I just wanted another day, living for each as it came. My future looked bleak. In other words, it looked as if I might not have one. Later, my doctor told me he had given me three months to live and considered my healing to be stunning. So I should have been happy that I was alive, right? It wasn’t the case for a long time. After the new AIDS medication came along, I went from trying to stay alive to recovery to good health and then rapidly back into the familiar cycles of cynicism and misery I had known for most of my life.

Today, I live a few blocks from the Lenox Health Greenwich Village hospital on Seventh Avenue. In 2020, the hospital parked a large freezer truck outside to store the bodies of the people who died from Covid-19. During the first two weeks of lockdown, looking at pictures online of a Manhattan more deserted than I’d ever seen it, I didn’t leave my apartment except for groceries, fearing each piece of news on the radio—the endless talk of how it all started, of bats and chemical warfare. When I finally began venturing out to my studio in Bushwick on the unusually clean L train, I often found myself the only passenger. I had a stack of stretched canvases waiting for me in the studio, and I started to paint. The busy, loud world had suddenly gone away and in the quietude my mood changed. Something shifted. I was filled with the joy that can come with painting. I thought: ‘If it’s the end of the world, then where will worrying get me? Just do something. And enjoy doing it.’

‘‘Yes!’ I cried out. I was swimming in bliss
in the back seat of a beaten-up taxi.
My body seemed to gleam in divine reverie.’

A memory came back vividly from the 1980s, a time when I accompanied a friend to an ashram in upstate New York for a meditation retreat in a former ski lodge whose walls were lined with chipboard paneling. I trailed after my friend like a puppy, going to group meditations, chants and meals, standing in a long queue to bow to a guru. The experience was nice, but I had no interest in returning. In the taxi, the driver asked me what went on there and why so many women were wearing saris. As I started to tell him my experiences with the chants and so forth, I felt a pang in my chest. I thought maybe it was the vegetarian Indian food. But the percolating unease kept rising. Suddenly I felt as though I had taken a strong dose of LSD mixed with Ecstasy. The whole automobile seemed to burst into scintillating light as I emitted a blissed-out gasp, startling the driver.

I was swimming in bliss in the back seat of a beaten-up taxi. My body seemed to gleam in divine reverie. I was still conscious and aware of my surroundings and I could converse with the driver as the state of immense joy overtook me. It felt otherworldly, nirvanic, like a cosmic liberation, a sense of the ultimate vastness of all creation. When I got back to the retreat, the others took one look at my exuberant Cheshire-cat grin and had no interest in talking to me. So I went into my room and lay down and picked up the book the guru had written and started to read it. But almost immediately I had to fling it on the bed, feeling that if I read one more word I’d burst into a million pieces with the euphoria that engulfed me.

Months later, I returned to the ashram and experienced the same wave of ecstasy. The ugly paneling covering the walls seemed beautiful to me, as did the large bearded man snoozing on the Naugahyde sofa wearing a T-shirt emblazoned with an illustration of a kitten. I sat stock-still, fearing the bliss would dissolve if I moved. Over about twenty minutes, it slowly and softly faded, but months later it happened a third time, during a day chant and meditation that the ashram held at the Society for Ethical Culture on the Upper West Side. I was helping to make lunch upstairs and afterward I found myself alone at a large dining hall table eating an orange. I picked it up and stared at its underside. In a flash I suddenly saw the flower that gave birth to the fruit. As if through a microscope, I saw the tendrils from which the orange grew. Time had stopped as I sat there, and I was lost in a vision of the miraculous creation of this fruit from its seed. When I realized what was happening, I fell out of the reverie, trying to understand it, trying to remember how long I had been sitting there.

These experiences happened decades ago, never to return in quite the same way, and I still try to remember exactly how they felt.

I often think about my friends who’ve died miserable deaths from AIDS. I understand most people don’t like to talk about it, but we all know we’re going to die. It’s one of the first fundamentally human things we learn about life as children—that life is finite. So why are we afraid of talking about it? Is it the finality we balk at or just the unknown? I’ve never been the greatest morning person. I used to keep the shade open so the light would fill my bedroom to wake me. When I opened my eyes, I’d think, ‘I don’t want to get up and face this.’ Then I’d stand up beside my bed and think, ‘Ok, you made it another day. What do you want to do with it?’ It’s always the same answer: ‘I just want to enjoy the day.’ I know this might sound like kumbaya. But why not kumbaya? Do I want to be a bitch my whole life and then die?

In the mid-1980s, while living on Avenue C in Manhattan, I took some magic mushrooms and saw the Victorian wallpaper vibrate. I also saw a plastic bottle of baby powder on the floor and picked it up and emptied the powder into a glass bottle. Then I looked at the plastic bottle I had thrown into the wicker wastebasket and thought, maybe for the first time, ‘Where does that go?’ I thought of it traveling from the wastebasket to the curb to the dump to some mountain of garbage in a landfill and I wondered what happened to the mountain. Of course, now we all know what happens to the mountain, the endless mountains, and what they and the way we live are doing to the planet. 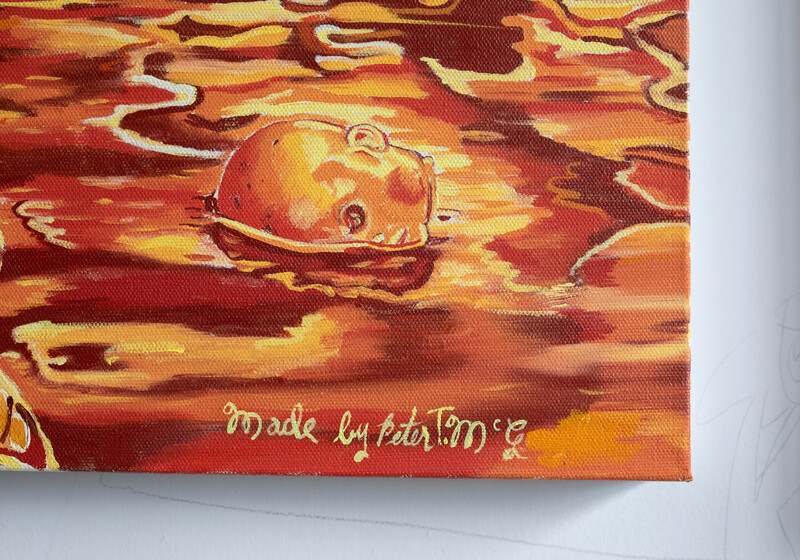 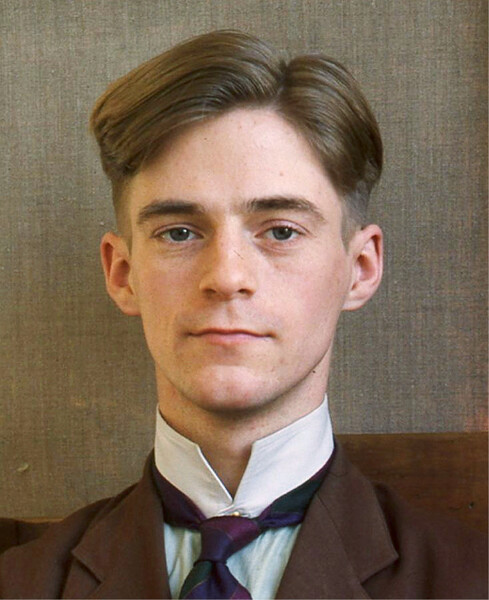 To be aware of these problems, to fear imminent personal and planetary doom—now seemingly right around the corner—and yet still to be not only grateful for one’s own life but to enjoy it is a tricky thing. It’s a kind of performance. To think about the plastic filling land and sea. To think about the news item that reported fifty-eight different pharmaceutical drugs in bonefish from South Florida’s coastal waters, including sixteen drugs in a single fish. To think about the television commercial that urged me to buy a survival emergency bag for the purposes of fleeing an ecological disaster. To think about how few of us really do anything about the catastrophe—driving, flying, buying, using disposable everything. To think about the ninety-one-year-old social scientist Mayer Hillman telling The Guardian a few years ago, based on decades of parsing climate research: ‘We’re doomed. . . . There are no means of reversing the process which is melting the polar ice caps. And very few appear to be prepared to say so.’ But also to think about Hillman adding: ‘So many aspects of life depend on fossil fuels, except for music and love and education and happiness. These things, which hardly use fossil fuels, are what we must focus on.’

In 2019, my memoir I’ve Seen the Future and I’m Not Going was published, and putting the book into world felt like an exorcism. I looked over the first printed copies and thought, ‘Well, I don’t have to be that crazy again.’ I realized how extraordinarily lucky I was that I’d made a living for more than forty years as an artist, through highs and lows, never saving a penny in my youth. Three-quarters of the world doesn’t have even the three most basic needs—food, clothing, shelter—met on a daily basis, and here I am, despite everything, in good health in a nice apartment in Greenwich Village decorated to my liking, plus a big, sunny studio, a sweet dog and a wonderful boyfriend. When my sister Margaret read my book, she said to me: ‘You must be here for a reason.’ I grimaced. I thought: ‘What am I here for?’ I didn’t want my answer to be cynical.

Maybe I’m here to experience joy: the joy of being alive. I know what I enjoy now, very simply. I enjoy being in my studio. When I work, I experience joy watching paintings evolve, becoming something from nothing. I enjoy, and am often incredibly moved by, the art of others. I can escape my petty concerns in art. I can feel the sublime, the spiritual, the eternal (and not even be embarrassed by the words!). In my youth I saw an exhibition of paintings by Frederic Edwin Church, including the magisterial Heart of the Andes and Niagara. I was so overwhelmed by the beauty of these works showing an unspoiled world that I started to weep in the gallery. Imagining the primordial world of the Americas, I had to go to the bathroom to sob. Who can seriously deny the magnificence of a sunset, of light filtering through the trees, of a seascape? We are privileged to be here, and all we really have is today. Life is a gift. So are the challenges. Don’t tell me my rainbow was late getting in.

Peter T. McGough became well known in the art world in the 1980s and 1990s as part of McDermott & McGough, with David McDermott. The duo participated in three Whitney Biennials, and a retrospective of their work took place at Dallas Contemporary in 2017. In 2018, their Oscar Wilde Temple was installed at Studio Voltaire in London. McGough has been a painter for more than thirty years and now makes his work as part of a solo practice. His memoir, I’ve Seen the Future and I’m Not Going: The Art Scene and Downtown New York in the 1980s, was published by Pantheon in 2019.