‘An eye either side’ 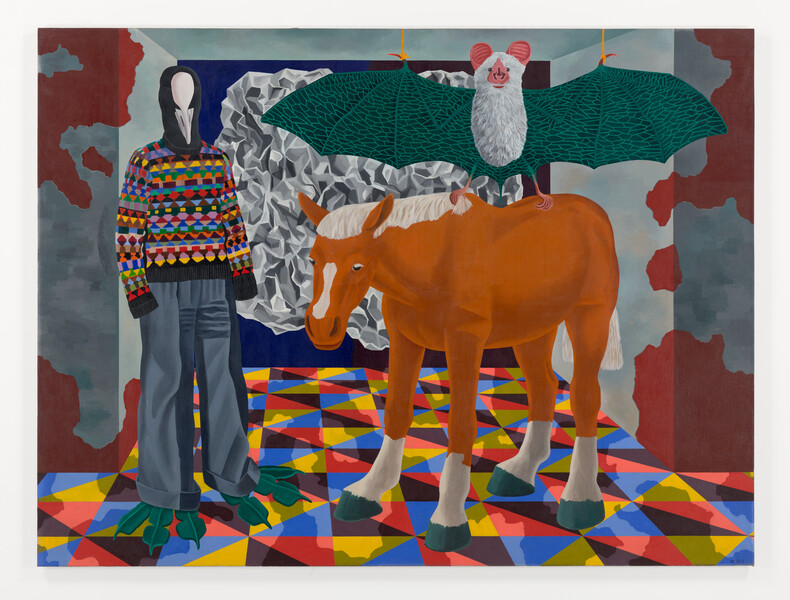 In Fabian Peake’s 1998 poem ‘The Search,’ the speaker is looking for someone ‘in the trees behind the mist’ and ‘in the night around the windows.’ Two features of this search strike me as useful when considering Peake’s career as a poet-artist in the tradition of Hans Arp or Paul Klee. Not only does the seeker take pleasure in his failure to discover the object of his desire—‘I expect and want you to hide’— but he seems uncertain that it really exists, at least in any conventional sense. This quarry must be sought for ‘where I think you’ll never be … [on] the other side of invention.’

The image of an artist stalking through the thickets of the imagination in search of something that can never be captured is a useful metaphor for any creative process, but seems particularly appropriate for the restlessly inventive Peake. The title of his latest exhibition at Hauser & Wirth Somerset conjures a similar picture: the artist as an animal with ‘an eye either side’ of his head, always scanning the world around him. In his paintings as in his poems, the world is a forest through which meaning flits like a shadow between the trees.

This search has driven Peake since he was a student at Chelsea and the Royal College of Art in the early 1960s, when he worked under the influence of Kandinsky, Magritte, Soutine, Miro and other painters exploring the relationship between reason and imagination, reality and dream. The influence of surrealism, particularly, is apparent in early works such as ‘Pierrot’s Message’ (1971), in which the eponymous actor stands on a pitched stage before a tessellated backdrop calling to mind the colors of his rival, the harlequin. The performance hints at some underpinning narrative, and yet no such simple explanation for the behaviour of its players is presented. If we were to imagine this scene in a play, it must be an absurdist production, in which meaning is withheld and no resolution is forthcoming. 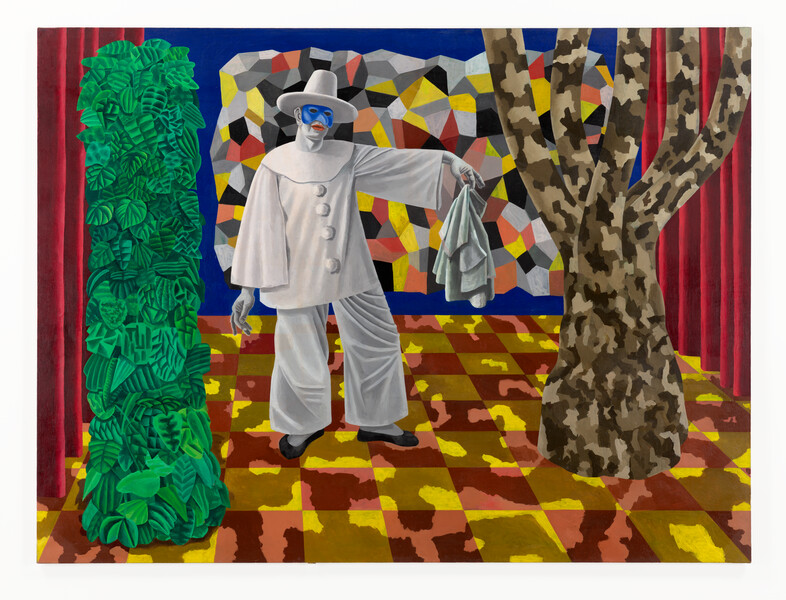 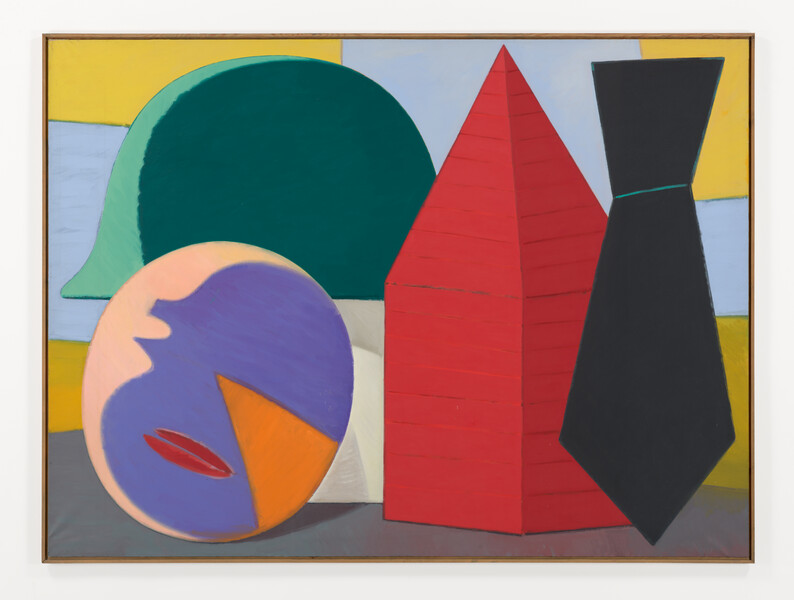 If there are stories in Peake’s paintings, they follow the same meandering logic as a search for something unknown. When, in the course of a conversation that moves from modernist poetry to water birds to the golden ratio in associative leaps of the imagination, he tells me that he enjoys ‘walking ideas round in his head,’ I am reminded of Paul Klee’s description of drawing as ‘an active line on a walk, moving freely, without goal … a walk for a walk’s sake.’ Peake’s mental peregrinations take him to places that appear unexpected even to him, the point seeming to be to get productively lost rather than to find the quickest route to a destination. ‘I often find myself walking through mental landscapes,’ he says, and paintings such as ‘He Was There Too’ (1983 – 84) have something of the same atmosphere of lost wonderment that infuses De Chirico’s metaphysical landscapes, albeit that these scenes tend to be populated by objects encountered in the course of everyday life.

Indeed, for all that his latest exhibition bears witness to, the dramatic stylistic shifts that have punctuated Peake’s career—‘the pattern with my painting is that I’ll be in a frame of mind which generally lasts for two, three or four years’—his paintings all exhibit the same tendency to gather apparently unrelated elements and set them into competition. He describes these combinations (of a very real-looking brick wall with an abstract black spiral, let’s say) as ‘arguments’ or ‘collisions’ within the frame of the painting that generate the ‘friction’ that animates the works. Not only is the eye never allowed to settle, but the mind is compelled to speculate on what might join all of these things together, on what lies ‘in-between.’

The technique this process most closely resembles is collage, and it can be useful to think of Peake’s paintings in terms of cut-and-paste arrangements. While he doesn’t mix media, the abstraction of different images from their contexts and their reintegration into new systems is a methodology typical of artists proposing new ways of thinking about the relationship between things. Curiously, given that digital culture exerts no obvious influence on these works, I find myself thinking of them in relation to the formats and aesthetics of the internet and social media. This might be because they represent familiar objects with no supporting information, thus estranging them. With its square format and monochrome ground, it’s easy to imagine the oddly sinister ‘Out of the Egg’ (1987) cropping up on my Instagram feed.

Fabian Peake reads his poem ‘an eye either side,’ 2022 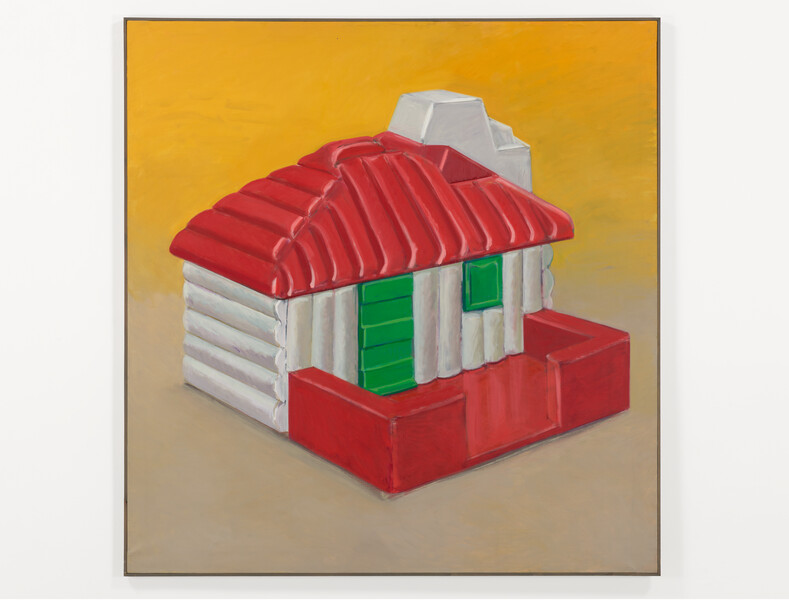 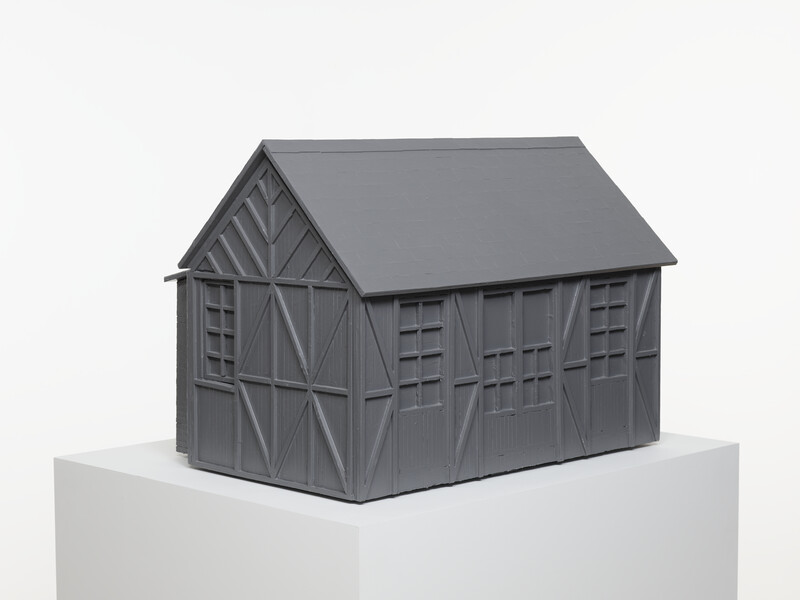 More broadly, these processes of decontextualization lend Peake’s work its characteristically unsettled energy. If in early paintings such as ‘The Orange Horse’ (1972–73) that recombinatory strategy seems indebted to the performative dissonance of the Surrealists—Lautréamont’s famous ‘chance encounter of a sewing machine and an umbrella on an operating table’—then it soon matures into networks of association which are at once subtler and stranger, predicated on loose echoes and obscure filiations between objects, forms and ideas.

In later works, these esoteric networks of significance can seem positively conspiratorial. Take ‘Street Shadows’ (2012 – 13), which features in its upper register a series of shadows cast on the ground by street lamps. The grid presentation calls to mind the code book for a semaphore of urban life. The impression of some hidden meaning is heightened by the tightly packed lines of handwritten poetry that are the painting’s backdrop, and by the painted postmark that seems to both fix the work in time (or outside it, given its impossible date) and confirm its status as a message to be delivered. Yet the postmark is ringed by the phrase ‘nothing is known this side of the velvet curtain.’ This line calls to mind the stage curtains visible in ‘Pierrot’s Message’ and the lesson of ‘The Search’: that what is sought for must always remain tantalizingly out of reach.

The important transitional painting ‘The Black Spiral’ (1974 – 75) introduces some of the barriers, veils and voids that are motifs in Peake’s work, notably the brick wall that at once obstructs the viewer’s gaze and rewards their attention. It is one of the most striking features of Peake’s work, and important to the understanding of his paintings as something other than a code to be deciphered, that these objects are not merely symbolic but also rooted in the material world. Peake is meticulous about the fact that the wall, for instance, is constructed of Fletton bricks whose variegated color is a consequence of each brick’s inconsistent exposure to the heat of the kiln in which they were fired. Even the two apparently abstract designs that are superimposed onto the painting can be seen, on close inspection, to cast a shadow. 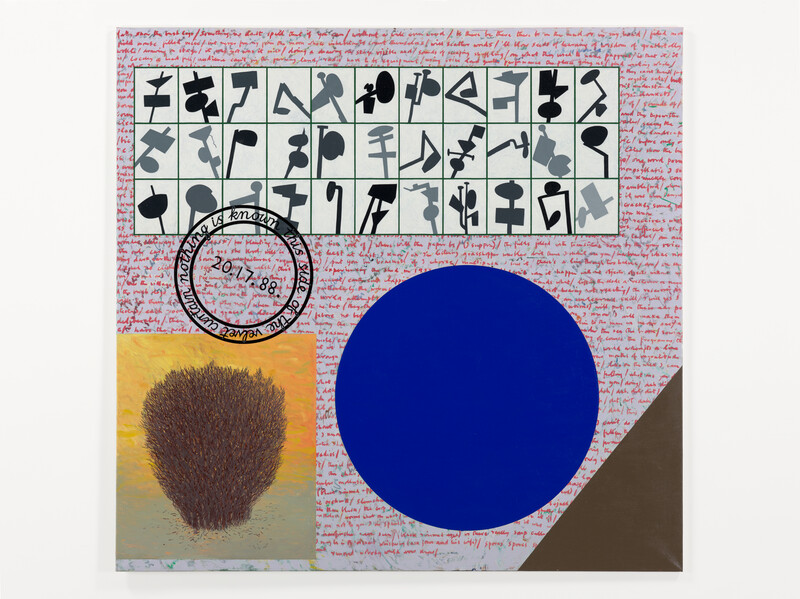 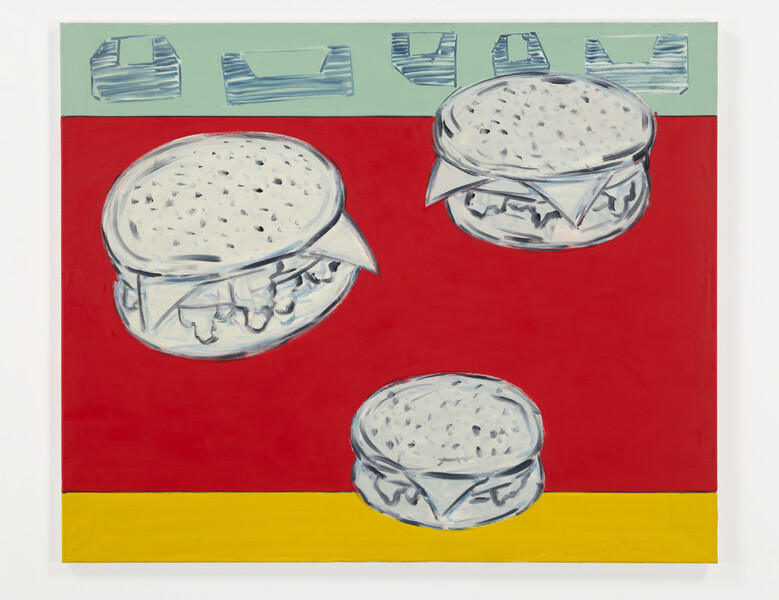 Unlike more conventionally symbolic painters or poets, Peake never entirely separates his objects from a reality in which they cast shadows or carry weight. These are not the free-floating signifiers of postmodernism but instead occupy a more conflicted ground between literal and figurative meaning. Even the hovering sandwiches in ‘Three Hamburgers’ (1997) have this oddly in-between quality, functioning both as symbols onto which readings can be projected but also, straightforwardly, as hamburgers. There is something here of Pop Art’s celebration of the ordinary on its own terms: the jumper worn by the figure in ‘The Orange Horse’ was knitted for Peake by his mother; the coot’s feet that poke out from beneath his bellbottoms do not allude to a myth but are more simply indicative of the artist’s love for birds. This close attention to the irreducible thingness of objects is perhaps most clearly apparent in Peake’s wooden sculptures. Constructions like ‘The House at Eype’ (2018) and ‘The Broken Boat’ (2018 – 19) assert themselves as objects that do not rely on allusion to something else for their meaning. The former reproduces a house on the Jurassic Coast that held a curious fascination for the artist. The search in this case seems to reproduce the strange charisma that makes an apparently routine object—whether it’s an old house or a black tie—capture our attention. Even the matt grey in which these objects are painted seems designed to emphasize their irreducible ‘thingness,’ their being in the world.

Ultimately, Peake’s paintings seem to me deeply concerned with the patterns into which these charismatic objects can be organized. As the effect of poetry is generated by the rhythms governing the distribution of words as much as their dictionary definitions, so the disparate elements in Peake’s works combine to create new and unusual harmonies. Hanging at the center of the second gallery in Somerset, ‘In the Hall’ (1987) introduces music into the room through its depiction of a standing piano. It prompts me to think of ‘He was there too,’ an otherwise inscrutable still life of variously scaled objects, as something more like a musical composition (an effect perhaps exaggerated by the formation’s resemblance to a band onstage). For many years Peake played saxophone in a quartet, and his paintings carry something of a jazz sensibility: these are compositions constructed on the hoof, through improvisatory exchange rather than in the execution of a predetermined scheme (when painting, he tells me, ‘the first image might not know what’s coming along after it’). It is this spontaneity and interplay that lends paintings such as ‘The Thought’ (2021 – 22)—with its combination of biomorphic forms, mirror writing, veils and pastoral imagery—their startling sense of aliveness. 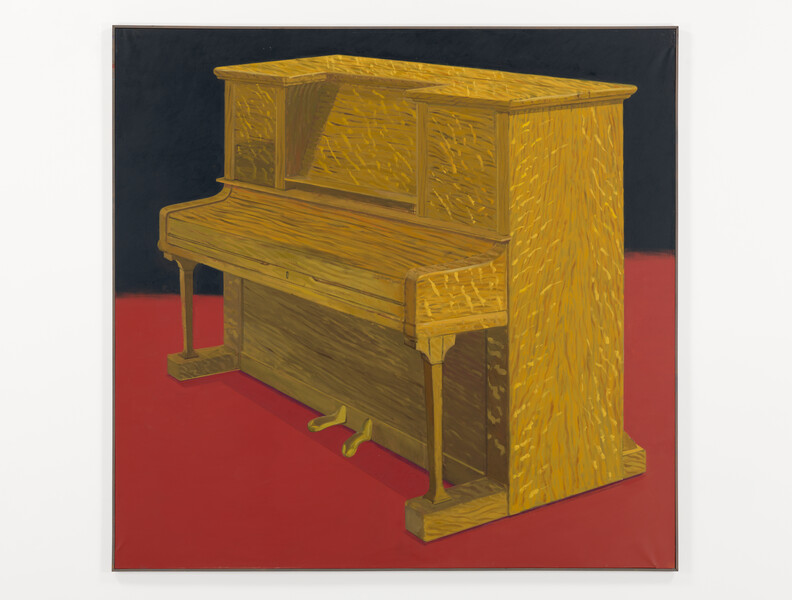 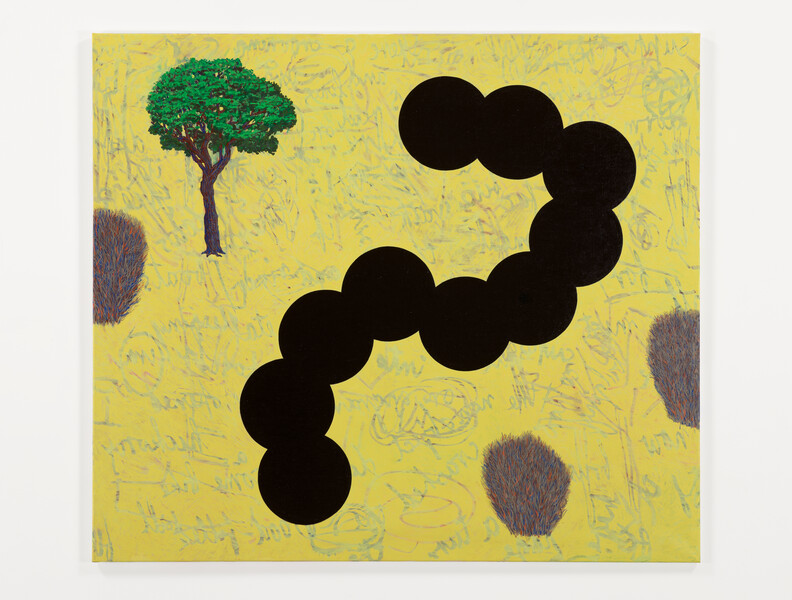 That Peake doesn’t know precisely what he is searching for is what makes it possible for him to discover something entirely unexpected. Like Socrates he understands that wisdom consists in recognizing how little we can really know of the world; like St Gregory the Illuminator, he subscribes to the idea that ‘we make idols of our concepts, but wisdom is born of wonder.’ His paintings offer a reminder that if we set out to find what we think we already know, we end up making of the world a mirror for our own presumptions. To live in uncertainty is to keep alive the possibility of astonishment.

Ben Eastham is author of ‘The Imaginary Museum’ (2020) and co-founder of The White Review.