‘My subjects are here . . . to be present with you in that moment’ 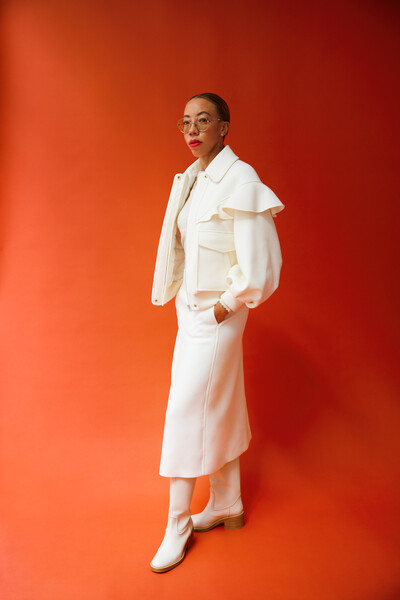 In an excerpt from the new publication, ‘Amy Sherald: The World We Make,’ the American artist met with National Book Award–winning author Ta-Nehisi Coates to discuss resistance and interiority.

Ta-Nehisi Coates: I’ve heard you say that your work is not necessarily about resistance. That it is of black people being allowed to just be. Of being. And what I hear is maybe a pushback against the didactic, the need to overtly sloganeer in your work. Where are you coming from when you think about that? Is that a reaction to the history of black art?

Amy Sherald: I’m coming from a place of expansion, of needing to expand myself. I’m coming from understanding my place and absence in art history as a woman and a black woman. When I was visiting chair at the Maryland Institute College of Art, I was working with a lot of young black artists. They’re learning history, and then they make work in reaction to that history. I think that is necessary, but a lot of it has already been done before, so I was urging them to dive deeper into who they are. To create work from a historically significant space, but forward-thinking.

I really think there are limitations when you get stuck inside of any kind of thing—it can be any kind of identity, however you identify. And I think, for me, with the way that black identity has been consumed publicly, the way that we can attach our experience to that, to the struggle for civil rights or the micro-aggressions that we experience—that can become your whole world. That can become all you wake up and think about, how you live your life and experience yourself.

‘I think it’s important to have a place to go where you can reflect, and these paintings became that for me.’—Amy Sherald

I thought I was going to die at thirty-nine, so at that time, I was really searching for a lot of truth. I really wanted to know who I was. I am a black woman, I am a global southerner, I am a mixture of German- Jewish and African—there’s a lot of things that I am, but my whole life I had only focused on my blackness. I had never even really focused on my gender, on being a woman, because my skin color always proceeded all. It’s what I felt people saw first.

I think it’s important to have a place to go where you can reflect, and these paintings became that for me. I needed a place to go where I could just be. I needed to shift my lens—like these are my black glasses, and these are my Amy glasses, where Amy gets to figure out who she would be without the constructs of race, gender, religion, and preconceived notions. It is about letting go of looking at people looking at me. You know what I mean? There’s this self-awareness you have as you move through the world, when you enter into spaces like white spaces, where you are watching yourself being watched. You’re not even experiencing your own self in that moment. You’re experiencing a reel in your head of what somebody else is thinking about your presence in that space. 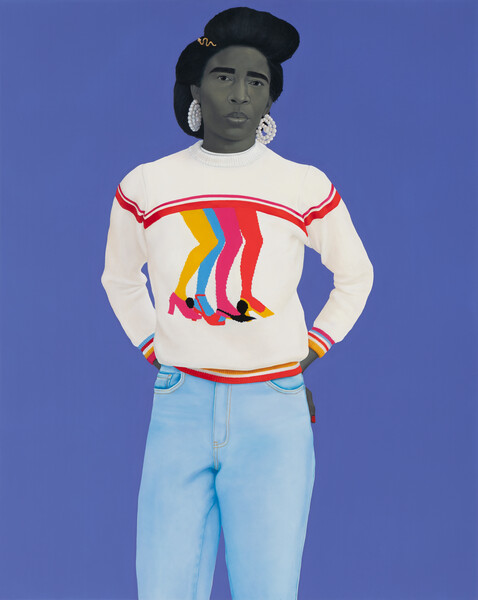 Amy Sherald, To tell her story you must walk in her shoes, 2022 © Amy Sherald. Photo: Joseph Hyde 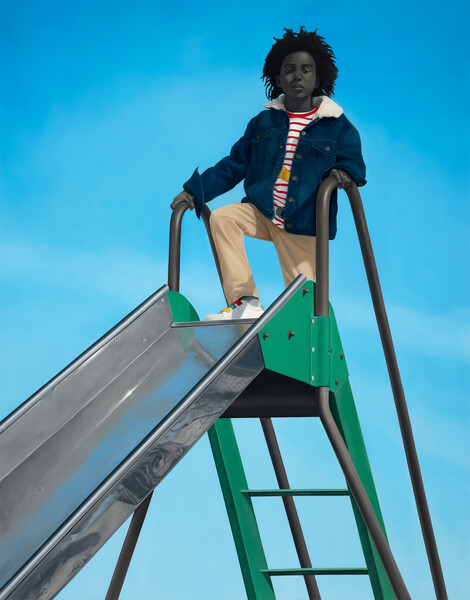 TC: Have you ever heard Toni Morrison talk about distraction? She’s talking about being a writer, and how you spend your time just reacting to what white people say about you. You’re always answering their questions. It’s a distraction technique. They say the dumbest shit in the world, like, ‘Your dad was an ape.’ And you spend all this time trying to prove that your dad wasn’t an ape. It deprives you of a certain amount of humanity because you never get to examine yourself, you never get to sit with yourself. And that, in effect, is a large part of how racism works. It is actually distraction, keeping you running around, and never, as you said, giving you that proper space. In that sense, the gentle pushback I would give you is that the respite that your work offers I think actually is resistance.

TC: Ultimately. Because that’s a thing that we don’t get, you know what I mean? When I came up as a writer, I was deeply influenced by the Black Arts Movement, and these are guys and girls—Sonia Sanchez, Toni Cade Bambara, Amiri Baraka, all of these folks—they’re responding to something. And in the ’60s, they’ve got to respond. Part of my luxury—and, I would argue, part of carrying on that tradition—is to be able to sit back and say, ‘Ok, but what do I think? How do I feel within this? How do I feel as a human being?’ I don’t know what your experience was like at Clark Atlanta University, but a lot of what I hear you say reminds me of being at a historically black college or university. Because that’s exactly what it was, right?

AS: Yes. I needed that experience. I went to Clark because I needed to be invisible. After twelve years—kindergarten to twelfth grade—of being black Amy.

TC: Black Amy [laughs]—that’s right. That very respite that you’re talking about, that’s what it offers: you get to just deal with the problem of being human, right? Human beings being human beings.

I’ve heard you talk about using the gray skin tone in your work to reflect the inner aspect of black people, the spiritual aspect. Why did you choose gray?

AS: I didn’t know why I chose gray when I chose it, and my story has changed over the years because my ideas about the work have evolved. In 2018, when I was getting ready for my first show at Hauser & Wirth, I was reading Kevin Quashie’s ‘The Sovereignty of Quiet’—I quote his work often—and he wrote about everything that I had been thinking. I realized that the vocabulary of interiority was exactly why it was right and necessary for me to not paint my people in a regular skin tone. It is about interiority. That’s what I want to portray, not so much this very visceral exterior experience that we all know and live. 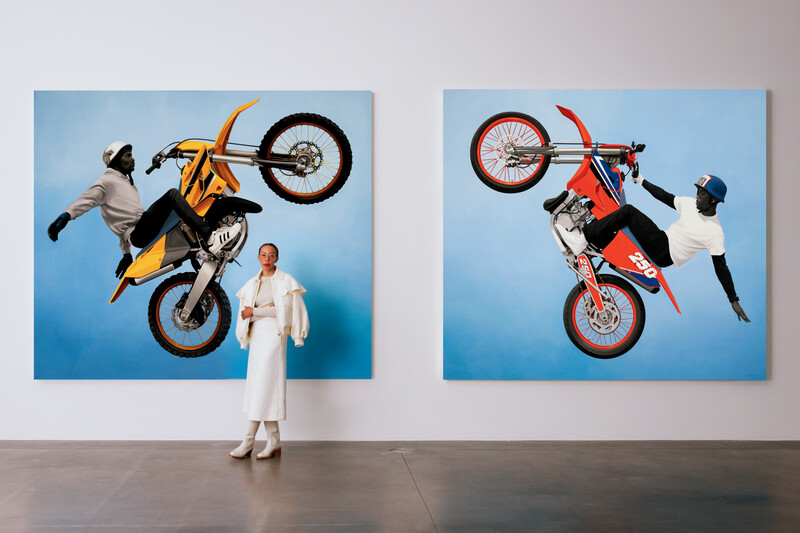 TC: You are a magnificent employer of color, so there is this beautiful contrast between the gray skin tone and the color. If someone described it to me, I would think that the color would be a distraction, but it actually draws you closer into the person. The person is the most solid thing in the picture. The color is beautiful and brilliant, and it pulls you in.

AS: Their faces are still the first thing you look at, even though they’re muted or gray, and it’s because they’re surrounded by that color. You’re drawn into their eyes, and you’re able to have a one-on-one dialogue with this person that you don’t know. They are there to meet your gaze and not just to be passive. Some portraits are just passive—you’re there, and you’re just looking at the subject, but my subjects are here to meet you. To be present with you in that moment.

‘Amy Sherald: The World We Make’ from Hauser & Wirth Publishers is the first widely-available monograph on Amy Sherald and accompanies the artist’s exhibition at Hauser & Wirth London, marking Sherald’s first solo show in Europe. Significant newly-commissioned texts include an art historical analysis by Jenni Sorkin, a mediation on the aesthetics and politics of Sherald’s portraiture by Kevin Quashie, and a conversation between the artist and Ta-Nehisi Coates. Beautifully reproducing Sherald’s recent paintings with an attention to their poignant details, this publication also illustrates a wide selection of earlier work alongside the essays and includes a series of in-the-studio photographs that provide an intimate glimpse into her process and practice.