A Nest for Learning 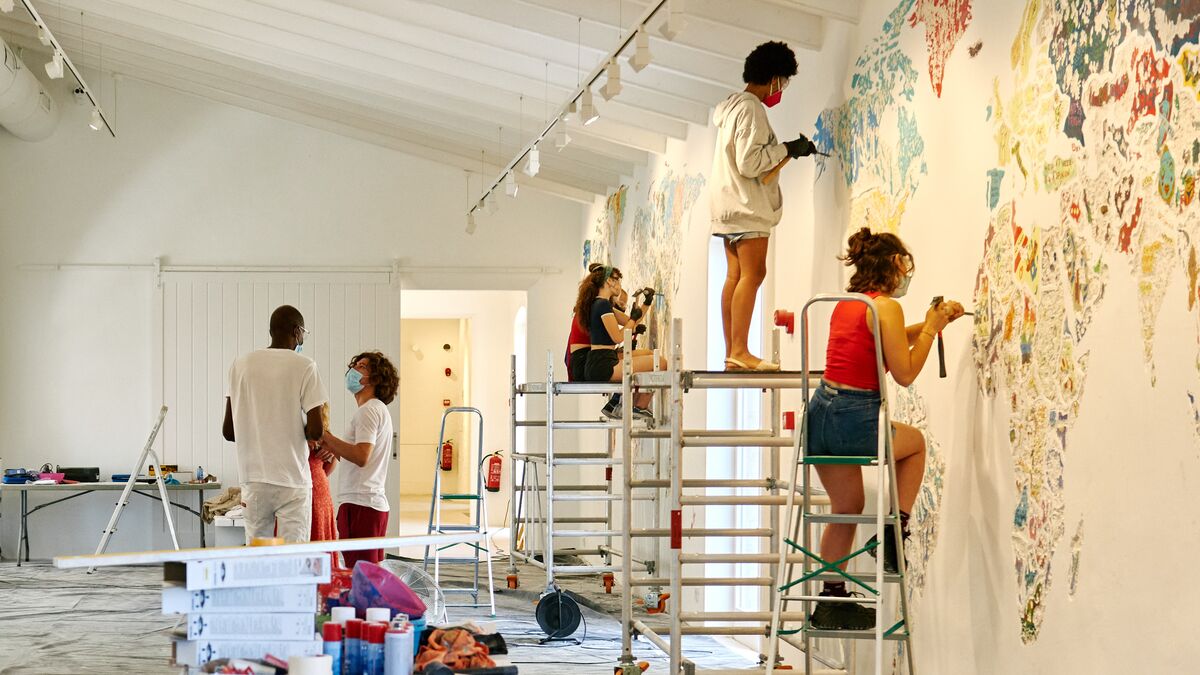 We asked Lola Mercadal, Head of Front Desk at Hauser & Wirth Menorca, to tell us about the Education Lab, an initiative for local art collaboration that began this summer on the island. For more than two weeks, Mark Bradford worked with local art students to shed light on the refugee crisis around the globe.

In June 2021, Mark Bradford and his team landed in Menorca, one month prior to the opening of our new art center Hauser & Wirth Menorca. The main reason for this Mark’s early arrival to the island was the planning of  the art residency in collaboration with local art students, who would work with Bradford in the center’s Education Lab to make pieces focused on the ongoing refugee crisis around the world.

It was very difficult for us to know what would happen within the Education Lab space without first seeing the students’ reaction to the project. As Mark said, ‘I had to get here and observe, just feel it and listen and it whispers to you.’ Little did we know the positive response we were going to receive from both the local and international public, as well as developing an amazing relationship with Escola d’Art de Menorca.

The first reaction of the students upon meeting Mark and seeing the education lab space was very quiet and discreet. You could sense the anticipation in their eyes. However, they only needed a couple of days to adjust to the space and to the way Mark and his studio team work to let loose and empower themselves. The way Mark energized them each day with a morning speech was exciting, especially for the students. You could see how his words gave them hope, and how much Mark himself drew from all of their enthusiasm and energy. 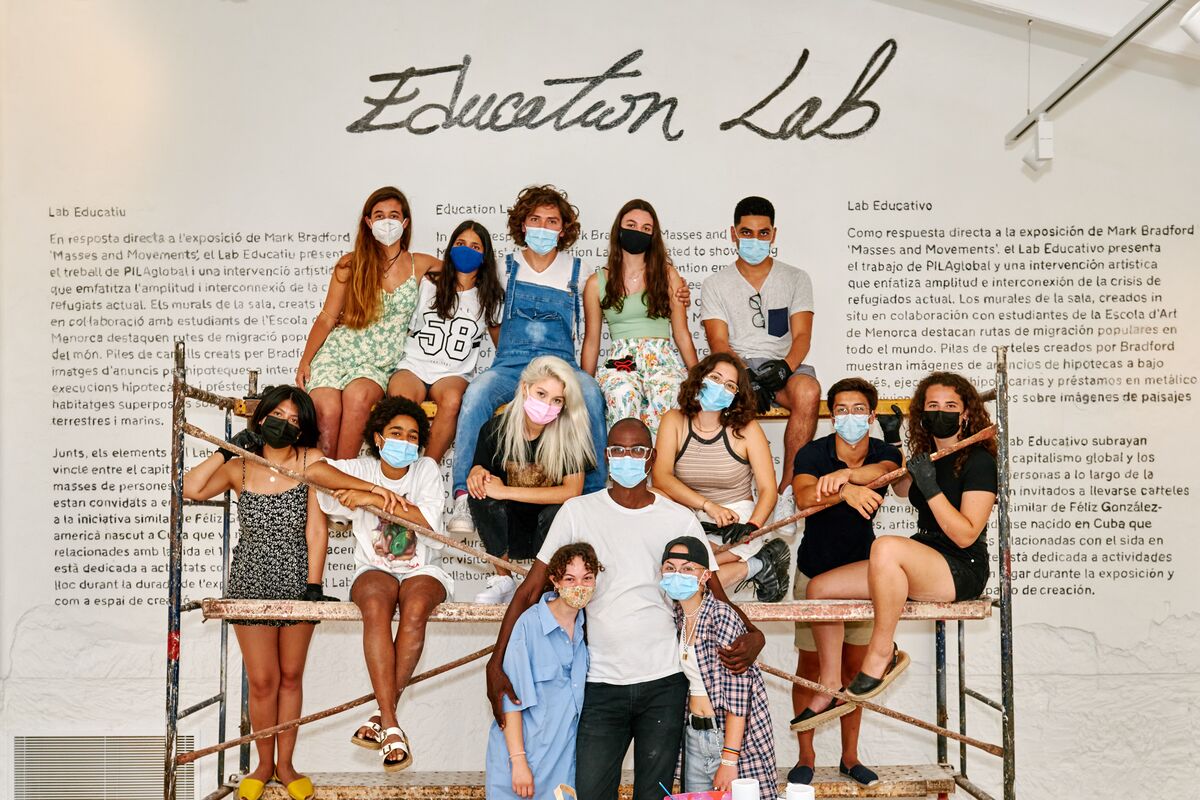 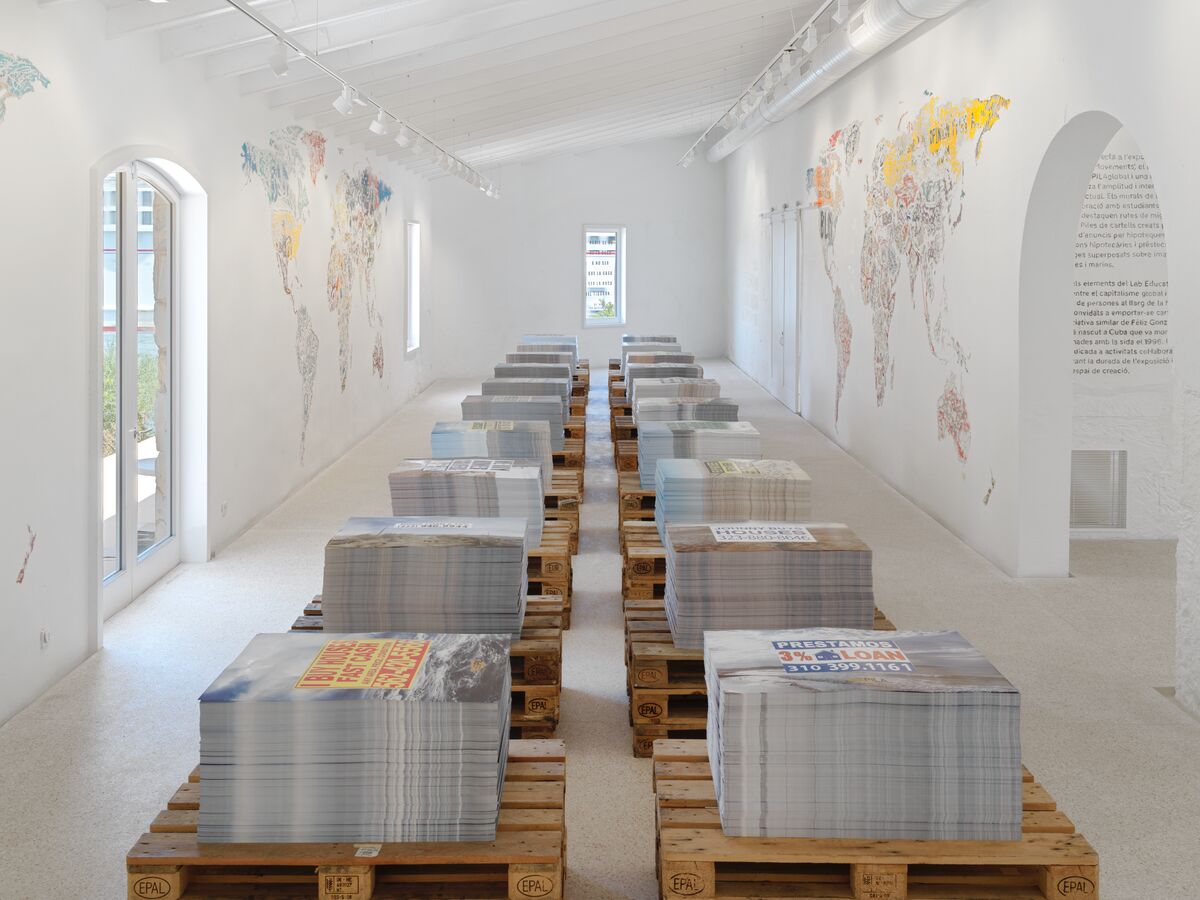 The first step of the process was to outline continents and countries, creating maps of the world that would be used to show, among other things, global immigration routes. The students used razors to define the borders of each country and then they drew freely inside of each space, expressing whatever they felt at that moment. This is when we started to see the real raw potential of the project. The lab acted as a framework for the students to unfold their creativity, which was powerfully reflected in the room. Mark guided them but no one told them what to write or paint. The space truly became theirs.

The second step in the process was to redefine the maps, interrupting their creations by introducing an ‘archeological’ layer. ‘I like this idea that the young people are actually almost becoming cartographers,’ Mark said. The students used chisels to ‘destroy’ their own painted images, leaving a palimpsest through which viewers must guess what was depicted in the space beneath. Lastly the students painted factual migrant routes on the maps to show the paths refugees have taken in recent years in search of safety, work and better lives.

This art education residency marks the beginning of Bradford’s year-long collaboration with PILAglobal, a non-profit founded on the belief that all children, regardless of economic or geographic considerations, are entitled to an education that sparks curiosity, creativity and critical thinking.

Through the creation of ‘Nests,’ PILAglobal offers innovative education to children who live in refugee camps, migrant shelters or in abject poverty. In a very real way, this idea of a ‘Nest’ is what we ended up creating in the Education Lab here in Menorca with the art students. They were part of the process from the very beginning, leading the creation of the maps, and they are now in the space every day meeting visitors, helping them to understand their contribution, voice, and generating awareness and engagement around the global refugee crisis.

The Education Lab at Hauser & Wirth Menorca is an integral element of Mark Bradford’s exhibition ‘Masses and Movements,’ on view until 31 October 2021. This project was created by students from Escola d’Art de Menorca in collaboration with Mark Bradford, Marcos Lopez, España Martinez, and Lola Mercadal. There will be further opportunities for visitors to engage in hands-on activities, and the space is dedicated to public engagement program throughout the duration of the exhibition.