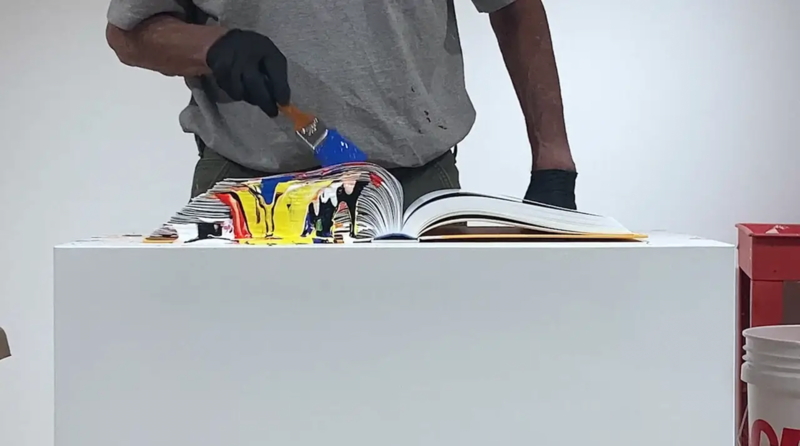 In 1977, Richard Jackson photographed a stack of books. The wide breadth of topics—from Oskar Schlemmer to Anaïs Nin, African tribal sculpture to Egyptian hieroglyphs—makes more sense knowing these volumes belonged to Dagny Corcoran, a friend of Jackson’s who had just founded Art Catalogues, her now-renowned Los Angeles bookstore, that same year. Jackson had been included in a group exhibition at the David Winton Bell Gallery at Brown University in Providence, Rhode Island, and he contributed this photograph to the catalog, captioned with an idea for an artwork: ‘Paint every page of each book, while still wet stack the books filling a room, wall to wall, floor to ceiling.’ 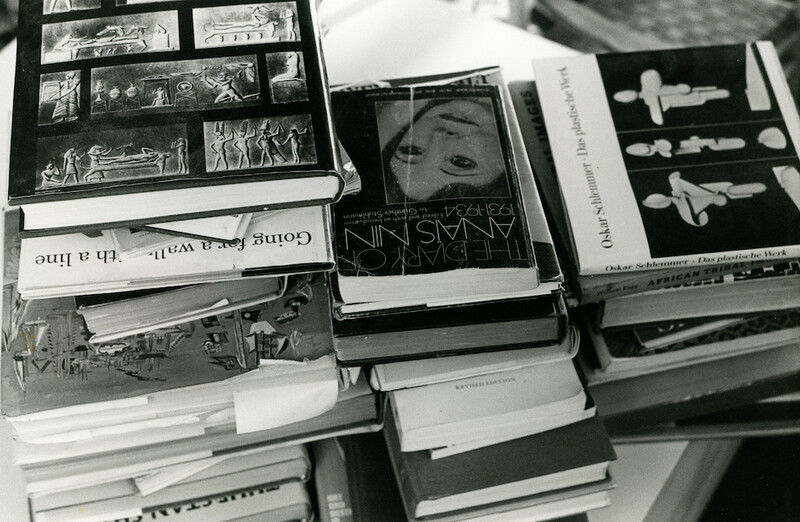 This photograph, taken at Dagny Corcoran’s residence in Los Angeles, was included in the catalog of an exhibition at David Winton Bell Gallery at Brown University, accompanied by text that inspired Jackson’s ‘Painted Monograph.’ © Richard Jackson

More than four decades later, all the elements of this anecdote—Jackson, Corcoran, books, and paint—converged again: on the occasion of ‘Richard Jackson: Works with Books,’ a presentation of his book works organized by Corcoran at Hauser & Wirth Los Angeles’s Book & Printed Matter Lab, Jackson painted all 480 pages of Hauser & Wirth Publishers’ 2020 monograph on the artist, authored by art historian John C. Welchman and with a chronology by Corcoran.

Corcoran produced the above film of Jackson making ‘Painted Monograph’ while expounding on his philosophies on art, work, and life, and the books he made along the way. In their conversation excerpted below, Jackson discusses how he uses the viewer’s imagination as a device and gives the backstory on his intentionally illegible contribution to the 1978 catalog for his show at Ed and Nancy Kienholz’s Faith and Charity in Hope Gallery. 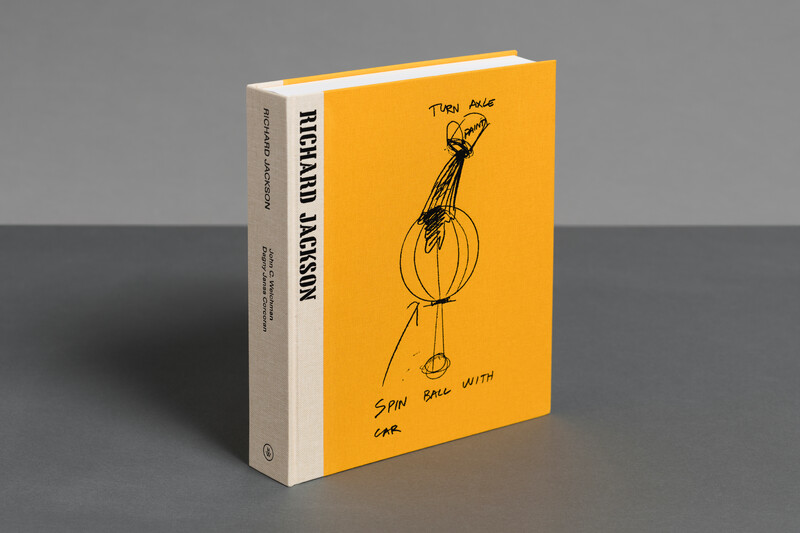 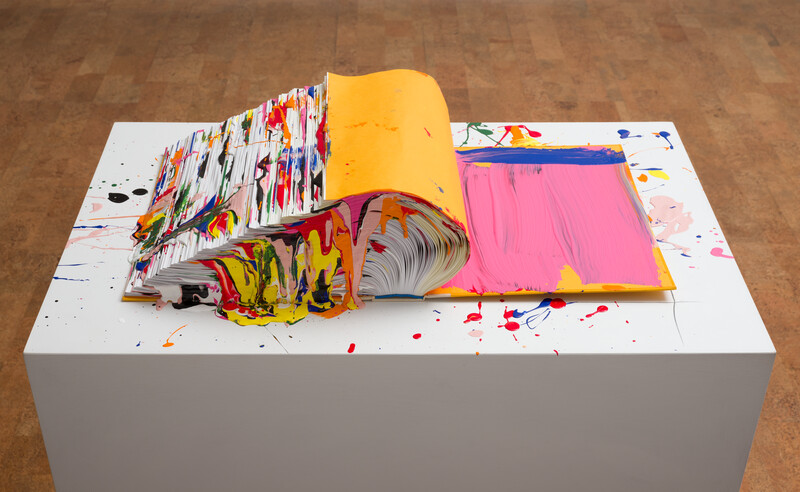 Dagny Corcoran: That poor book is going to get drowned in all this paint.

DC: You’ve been strict about not letting people actually watch you do that.

RJ: Yeah it makes me nervous. It was an idea that I could do these do-it-yourself paintings, you know, where I supply all the materials, and then the person who buys it has a multiple, and they can do a wall painting themselves. I think what’s wrong with that is that people don’t understand how much work goes into those things.

DC: But of course you rarely allow people to watch you activate a piece, so how would they know?

RJ: I think they would know if they were more observant. Paintings are great for people with no attention span. 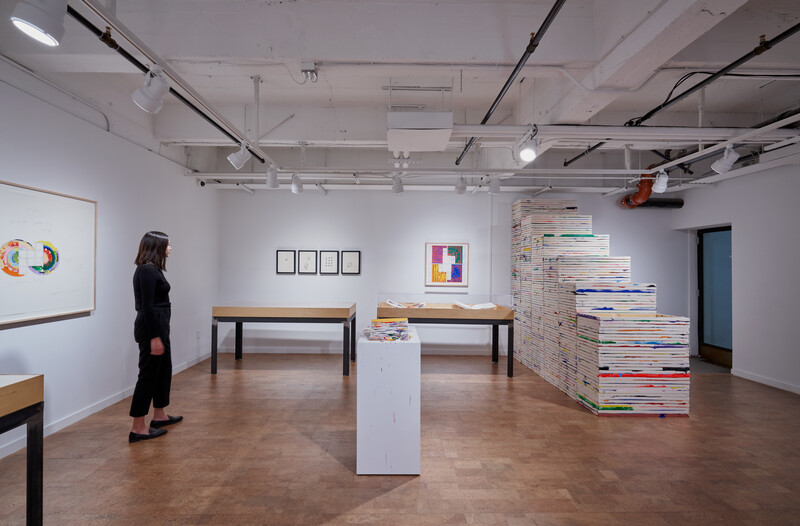 DC: But you know, one thing I did notice, just now even, is there’s a lot of pre-thinking. Even with this piece, the colors that you’re bringing in are just colors you like and want to use?

RJ: No. You can’t make a mistake when you have this kind of volume. That’s a different kind of art, where you make decisions.

DC: But you’re making decisions off the seat of your pants, as you go on?

RJ: This is how it works in every case. You start with red, blue, and yellow, and then everything is a derivative of that.

DC: You’re going to paint four-hundred-and-something pages. You’re just going to stand up and paint for however many hours it takes you?

RJ: Yeah, because a teacher of mine told me that everybody has to stand up to paint. And he said that because Rembrandt never sat down to paint. But I kind of like that idea. I think the thing about my work here is that I use people’s imagination as a device. If you imagine the work before it’s done, it’s different, you know? And when you don’t see it, you have to use your imagination. And if they see it, it turns out it’s no big deal.

DC: It’s like a magic trick. No magician is going to let you see how he does his tricks.

DC: But you have all these ideas. That whole deal with [Ed] Kienholz—that was one of the first catalogs you kind of painted, that one you did for Faith and Charity Gallery?

DC: Nancy had asked you to do a cover for their catalog. You wrote your name on the front of the catalog, and then smeared it. 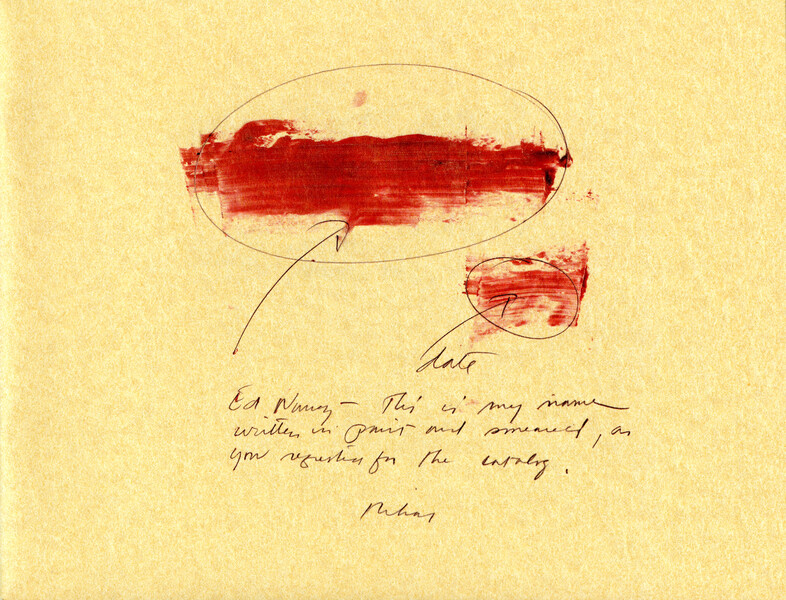 Cover of ‘Richard Jackson,’ The Faith and Charity in Hope Gallery, 1978 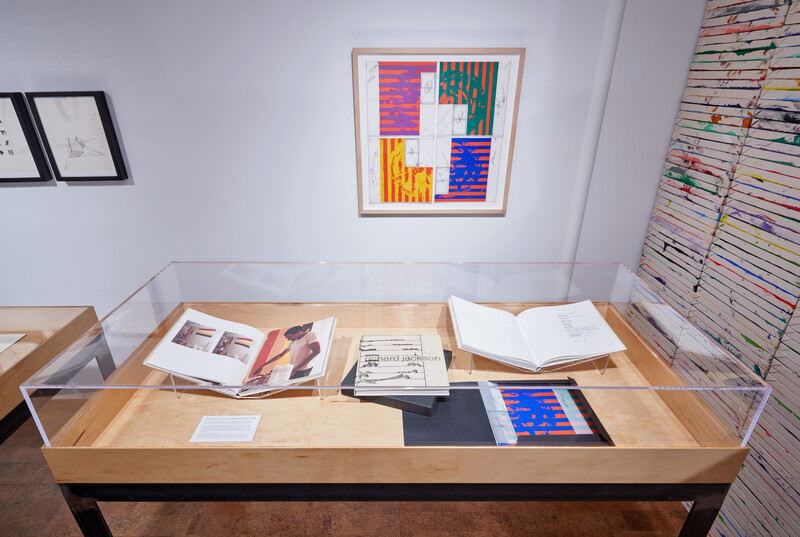 RJ: I had all those drawings that I did for an exhibition at UC Davis—a hundred drawings, a hundred ideas. So we took the drawings, Nancy made that catalog, and she and Ed suggested, on the cover, ‘Write your name and maybe smear a little bit, you know, like you do your wall paintings.’ I never take anybody’s advice, but because they’re friends, I decided to smear my name so you couldn’t read it, and then date it, and smear that, so you can’t read anything.

DC: So that show you had up there, it was a giant installation, and Ed said that the result was not unlike a rainbow with diarrhea.

RJ: The other thing with Ed, unlike myself, people need the art. I don’t.

DC: You don’t. But you have to believe something, Richard, because you’re still doing it. You’re eighty-something years old.

RJ: Yeah, but it’s only because—I don’t know what it is. Don’t press me.

DC: You’ve never made a big effort to make something that’s salable or easy to deal with.

RJ: No, somebody else does that. I don’t have to do that.