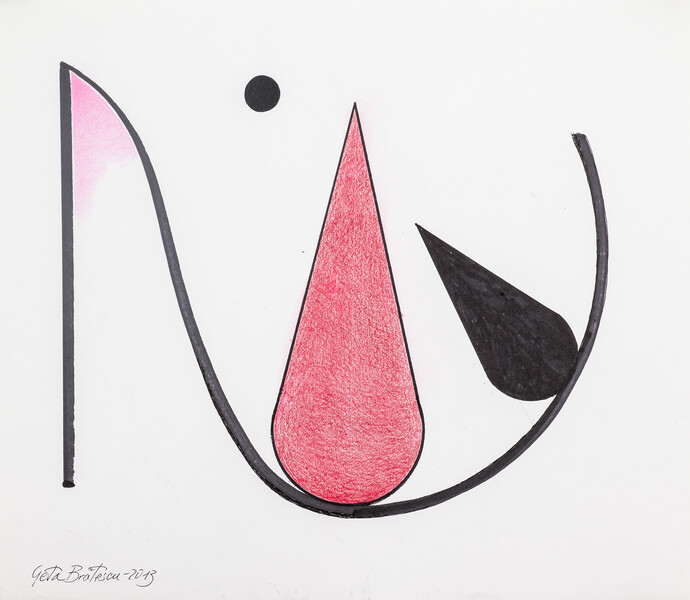 ‘Of course, in so many years, every human gesture has its own history. My history is the permanent continuity, from child to the present day, in drawing.’—Geta Brătescu

Deep reflection and playful exploration come across in reading the 2019 publication ‘Geta Brătescu: Game of Forms’—a curated selection of the artist’s words and artistic works undertaken between 2007 and 2017. The Romanian artist’s dedication to and passion for her works on paper are further underlined in the introduction by Marian Ivan, which also reveals an essential part of the artist’s practice in her ardent notebook writing. No stranger to limiting her creative world to the studio (censorship in 1970s and 1980s Romania forced many artists to work solely in private), Brătescu in her 80s and early 90s found inspiration from memory, material, as well as the blankness of the page:
‘There is a freedom and lack of constraint in ‘Game of Forms’, the artworks delimited only by the edges of the paper. It was an almost complete freedom that, paradoxically, was offered to her within the very cramped space of the studio: the freedom to be able to carry on ‘drawing with scissors’, setting out from the new ideas that came to her every day, ideas generated by the texture of the paper; by simple everyday materials and objects with which she always took pleasure in working.’ 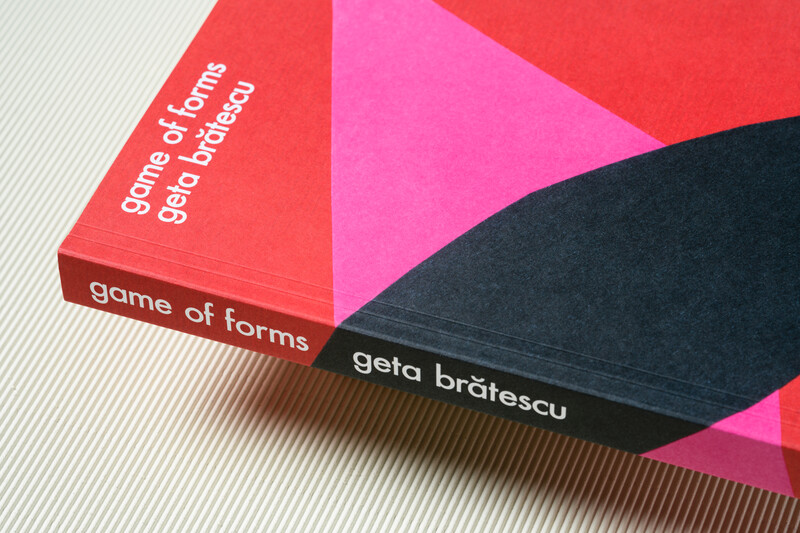 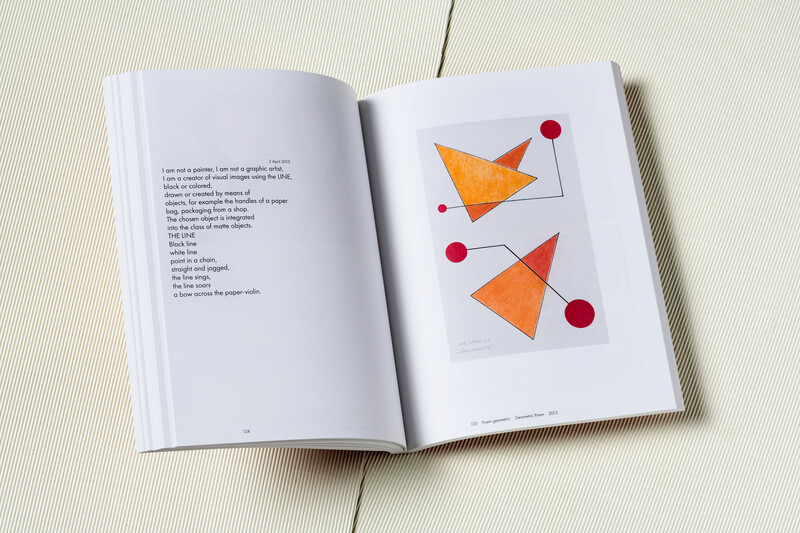 The book’s design by Belgian design studio ruttens-wille engages in another game of forms, juxtaposing Brătescu’s texts translated from Romanian alongside works playing with scale within the layout. All components together open up the ‘serious game’ of art, its concepts of her thinking about shapes and a composition’s connections to music and dance. The potential of another world opens up on the page. 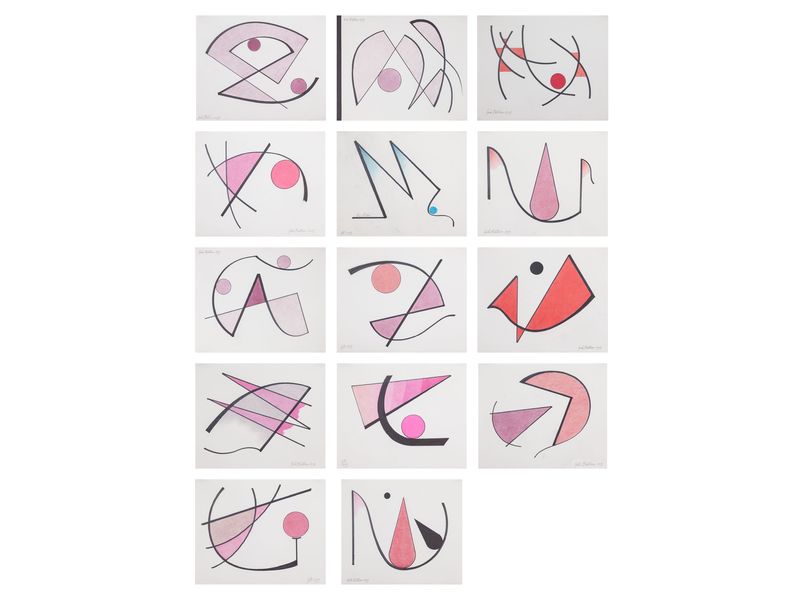 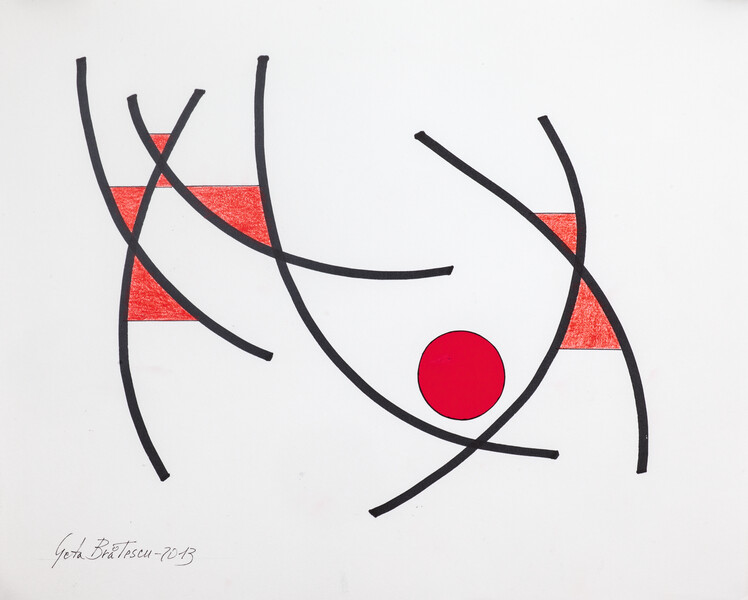 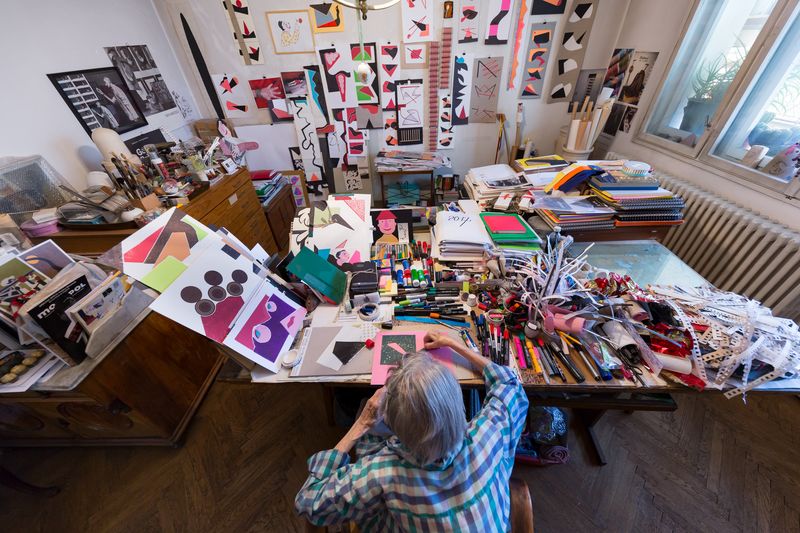 Geta Brătescu in her studio, 2018 © The Estate of Geta Brătescu. Photo: Cătălin Georgescu

The drawing is
a dance
of three linked
characters:
the brain
the eye
and the hand.
In the line of the drawing
can be read
the feeling and rhythm
of this dance,
its sensual freedom. 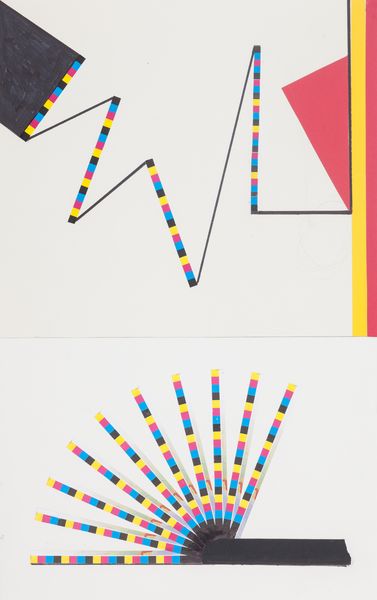 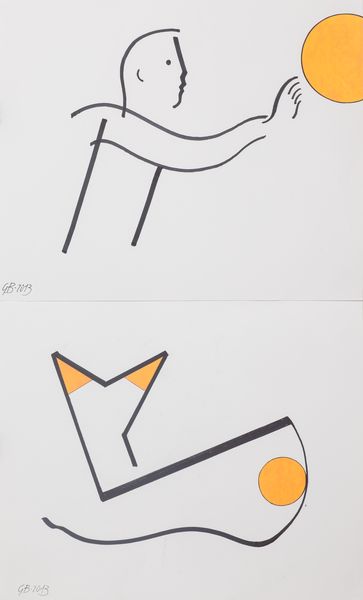 Drawing is a text.
There are those who write with letters
and those who write with drawings.
I am chiefly a member
of the second category.
Today I wrote a man who
looks at the sun.
You can write this way with a pencil,
with a marker pen, with scissors.
Drawing is the line sailing
on the white ocean of the paper.
It is a sailor’s knowledge
and the temptation of space. 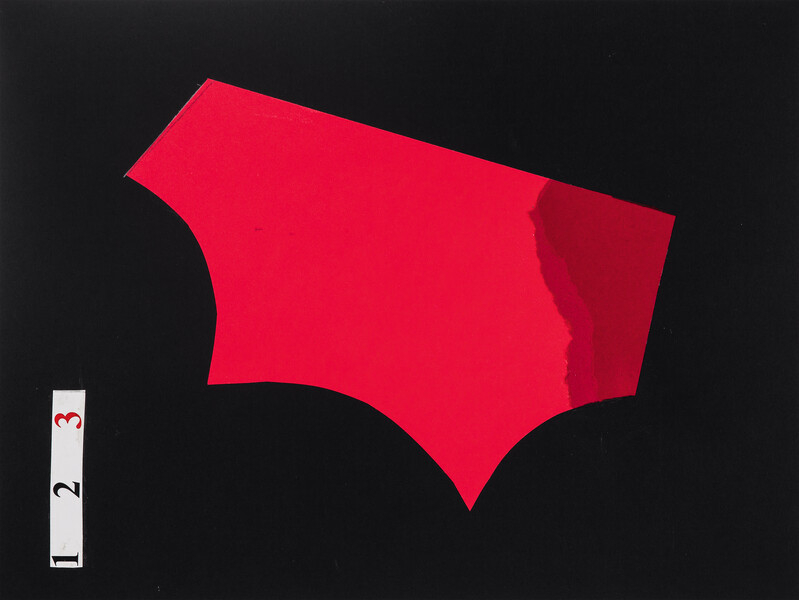 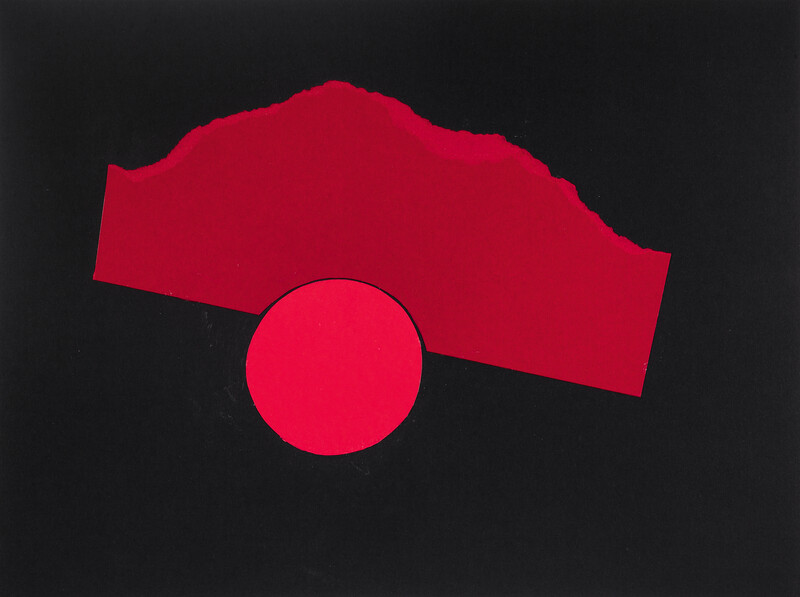 My most recent collages employ colored
paper, drawn on by means of outlines cut
out using scissors. I draw using scissors,
a creative gesture above academic drawing
and without pencilled preliminaries.
A form demands another form; there
are no preconceived necessities; a form
created through its energy itself creates
another form and this in turn creates.
—1 May 2014 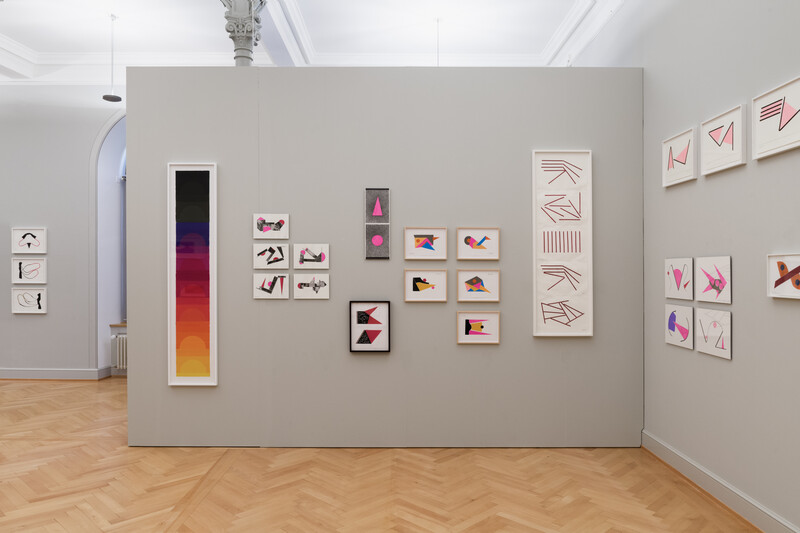 The space of the paper on the surface
of the drawing board: this space, in the
condition of reality, is very small, but when
I work, the real space gives way to the
imaginary space, the space dictated by
the needs of the line. To the eye, to the
hand, what occurs is an unshackling,
a freedom of gesture, a pleasure.
The pencil, marker pen, or scissors
are for me the tools of this release. 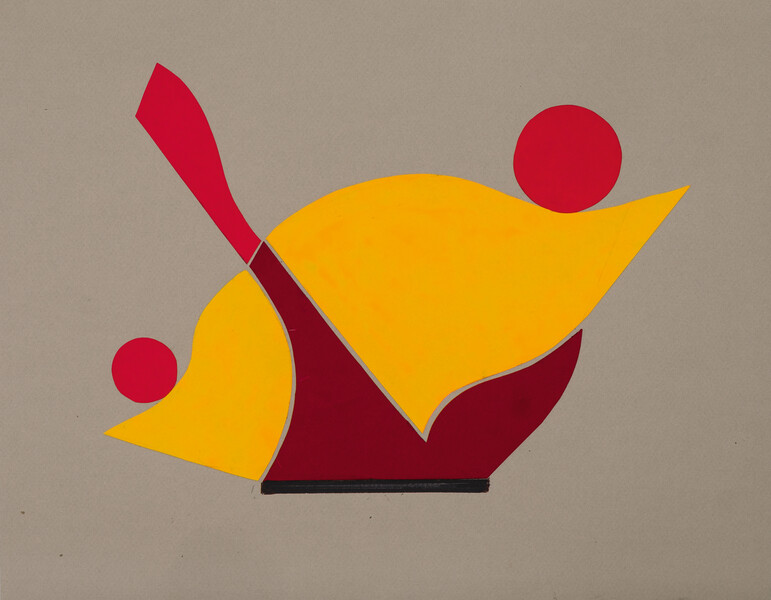 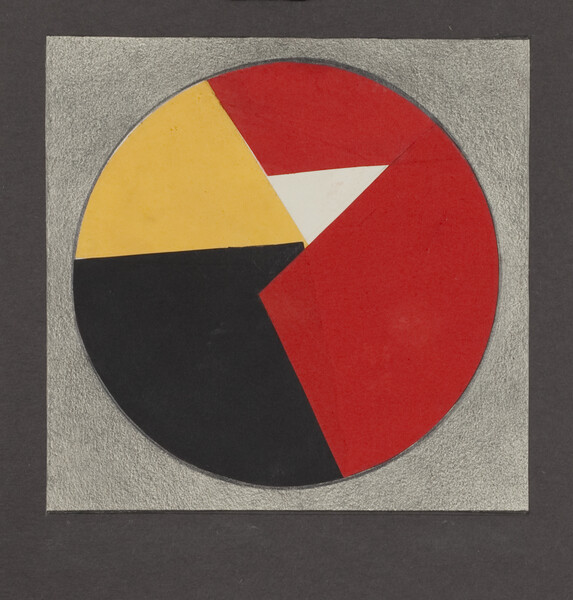 I’m working on Collages (Gluing).
But before the technical phase of gluing,
I have to compose the performance of
forms and colors. The PERFORMANCE
on the stage of the paper depends on
the eye and the hand of the director,
the artist.
—December 2015
–
Since its founding in 1992, Hauser & Wirth Publishers has been devoted to the presentation of unique, object-like books and a rich exchange of ideas between artists and scholars. Exploring the Archive continues this commitment through the digitization of excerpts from seminal, rare, or out-of-print titles from the Hauser & Wirth Publishers archive, which comprises monographs, artists’ books, exhibition catalog, and collections of artists’ writings.
A survey of Geta Brâtescu’s practice titled ‘L’art est un jeu sérieux’ is open at Kunstmuseum St. Gallen through 15 November 2020.