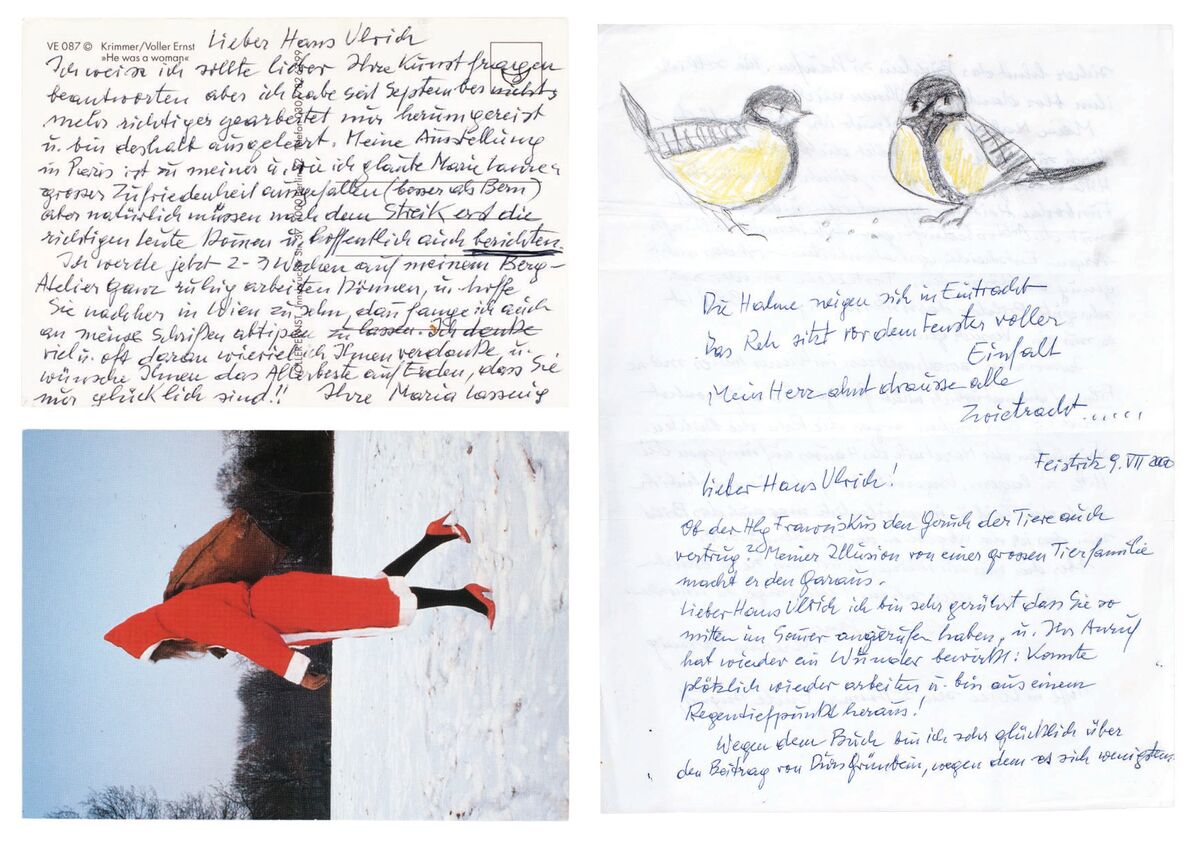 We invited eight artists, writers and actors to read selected letters from the book ‘Maria Lassnig. Letters to Hans Ulrich Obrist’, which contains a complete record of all letters sent by the artist between 1993 – 2014, published for the first time. The letters are read below by Nicole Eisenman, Camille Henrot, Friederike Mayröcker, Paul McCarthy, Julie Mehretu, Birgit Minichmayr, Precious Okoyomon and Jennifer Packer.

‘Living with art stops one wilting!’ Maria Lassnig wrote in her letter to Hans Ulrich Obrist in 2014. The Austrian artist is celebrated for her visionary oeuvre of paintings, sculptures and films and her concept of ‘Body Awareness’. Listen to Lassnig’s reflections, including her thoughts on painting or polemics on photography, and everyday life between the urban art world and her remote studio in the countryside.

‘I get bored easily when I’m painting, but what is it about the art of writing letters? It’s not boring at all. The tricky question there is what to write and what not?’
This letter from July 1995 is read by Precious Okoyomon, a London-born artist and writer living and working in New York. Okoyomon’s first book of poetry, ‘Ajebota’ (2016), was published by Bottlecap Press, and her second book, ‘But Did U Die?’, will be released this winter by Wonder Press and Serpentine Galleries .

In this letter from December 1995, Lassnig writes, ‘I know I really should answer your questions on art but I haven’t done any proper work since September, only travelled around and so am feeling empty. My show in Paris is very much to my, and I believe Marie-Laure’s, great satisfaction (better than Bern), but of course after the strike the right people need to come and also to tell others.
‘I shall now spend 2–3 weeks being able to work very peacefully in my mountain studio, and hope to see you in Vienna after that. Then I will have my writings typed up. I think a lot and often about how much I owe to you and wish you the very best on earth, may you only be happy!’
Friederike Mayröcker is an Austrian poet and former friend of Maria Lassnig. Her books include ‘Night Train’, ‘Heiligenanstalt’, ‘Raving Language: Selected Poems 1946–2006’, among many others. 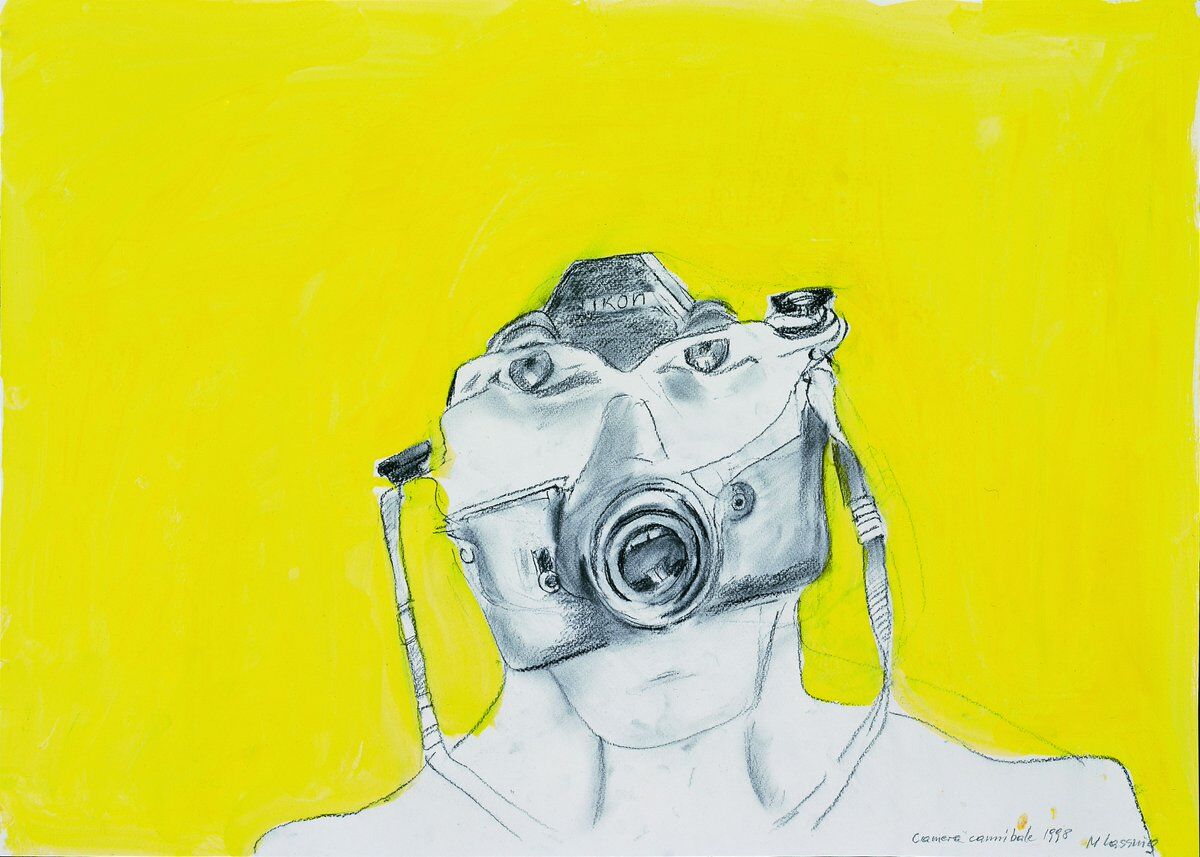 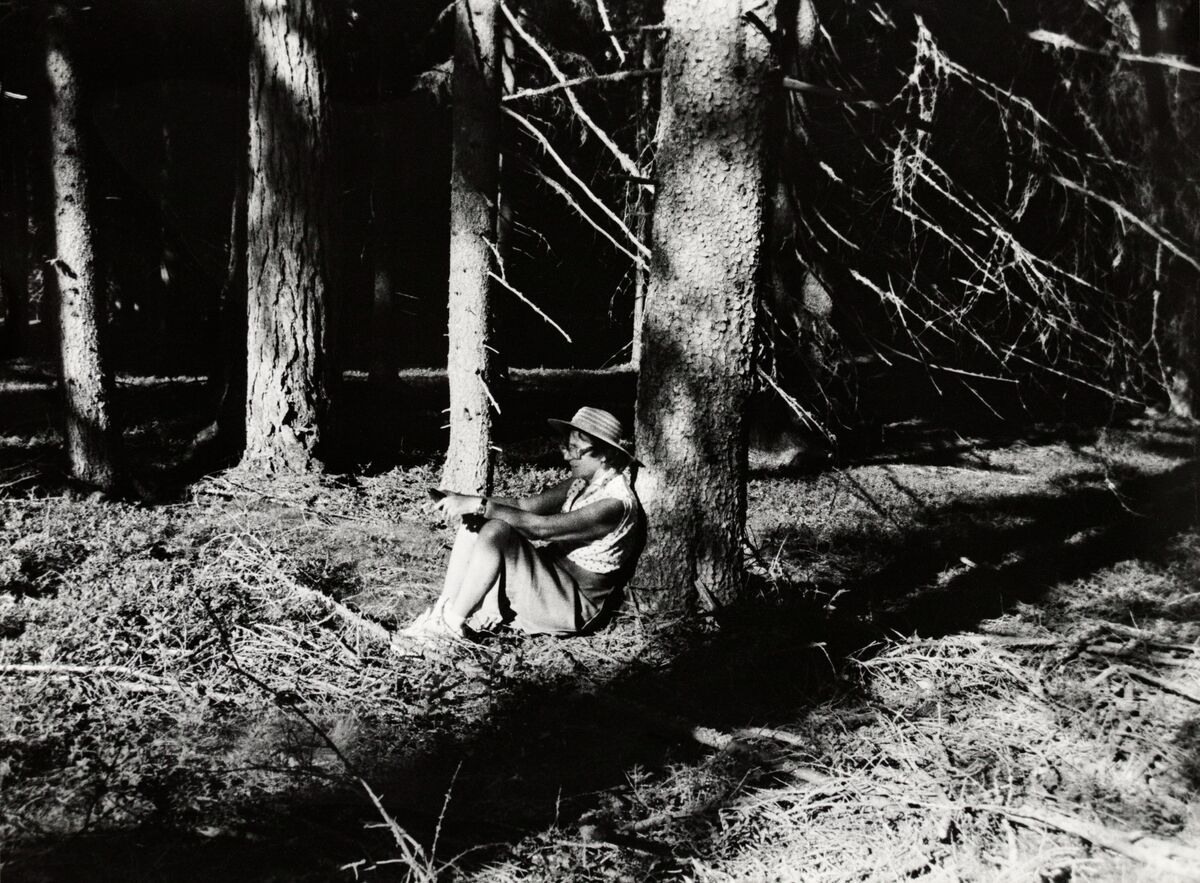 Upon her return from New York in 1980 and until the late ’90s, Maria Lassnig was a professor at the Vienna University of Applied Arts. In this letter read by New York-based painter Jennifer Packer, Lassnig provides a philosophical examination of the relationship between painting and photography, an ongoing subject for the artist.
‘Photography is chained to the world and necessary in science, in politics, even to guide the heart (captured memories), but in art it’s only necessary for its proliferation (which isn’t so necessary) although art is still always necessary for photography.’
Packer, who is known for her intimate portraits of friends and family members, interior scenes and funerary bouquet still lifes, is the subject of a solo exhibitions at MOCA Los Angeles and Serpentine Gallery London this year.

‘The stalks incline in harmony The deer sits before the window, filled with innocence. My heart suspects dissonance outside…’
Nature was an important force for Maria Lassnig, who spent her summers in the countryside of Feistritz in Carinthia and the rest of the year in Vienna. Her letters often include annotations such as this letter from 9 July 2000, read by Nicole Eisenman, which contains a drawing of two birds. 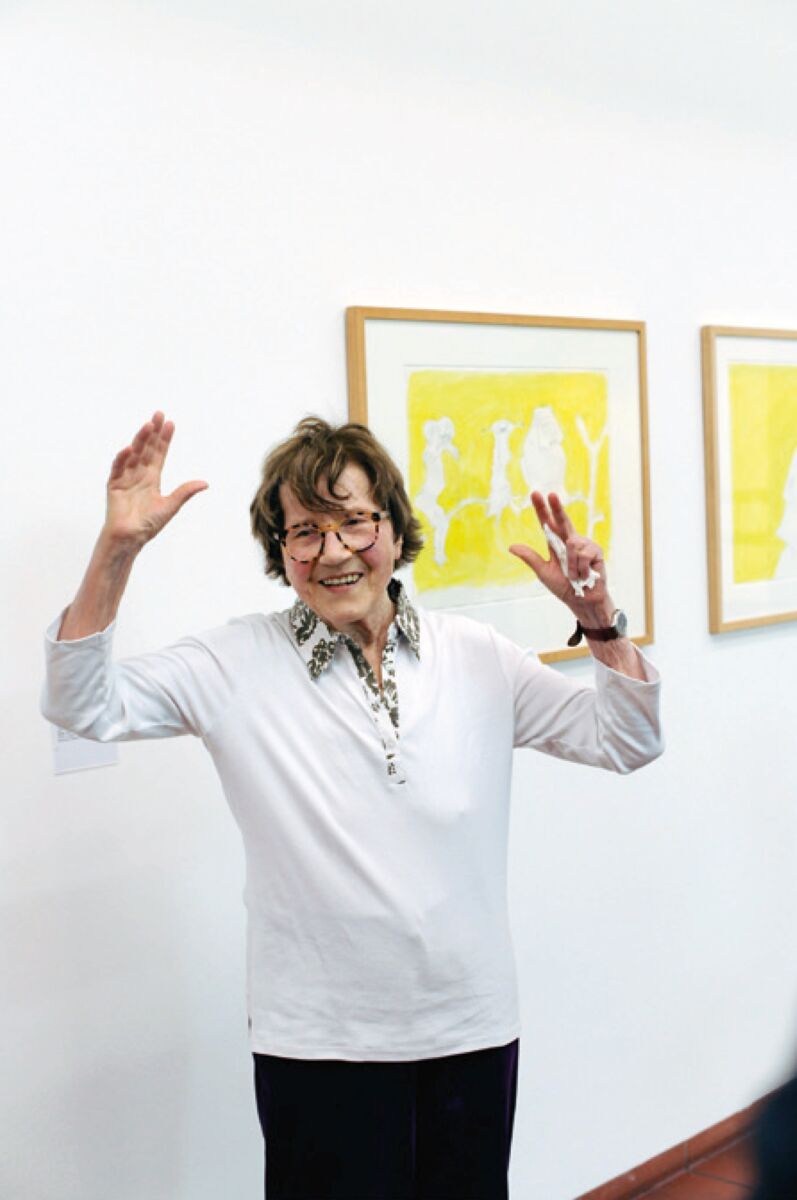 Maria Lassnig at her solo show ‘In the Mirror of Possibilities. Watercolours and Drawings from 1947 to the Present’, Museum Ludwig, Cologne, 2009. Photo: Sepp Dreissinger 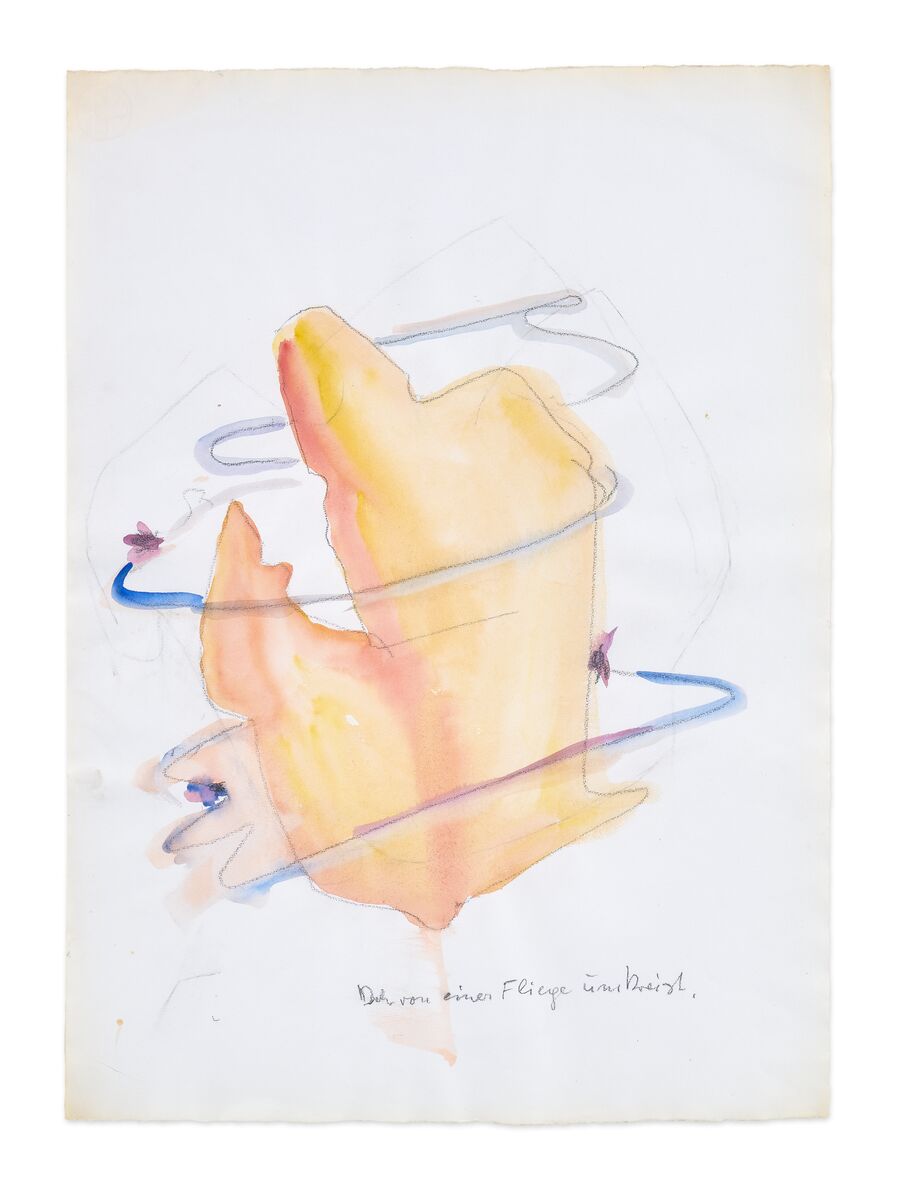 In addition to letters, Hans Ulrich Obrist and Maria Lassnig regularly exchanged books that inspired them. This letter from 9 September 2009 is read by Los Angeles artist Paul McCarthy who has taken inspiration from and written on Lassnig’s work, including for ArtForum and in the 2008 Serpentine catalog ‘Maria Lassnig’.

‘Sitting in front of the window in the branches, a bird, a blackbird or similar, is singing its heart out and whistling the most wonderful sounds for his wives or similar. They are questions, at least I hear him posing questions, and I tried to answer him and he actually listened, one time in front of a window before he flew around the corner to the other.’
Also surrounded by birdlife, French artist Camille Henrot reads Lassnig’s letter from the green pine forests of July 2011. Henrot previously completed a series of works on paper in homage to Maria Lassnig. 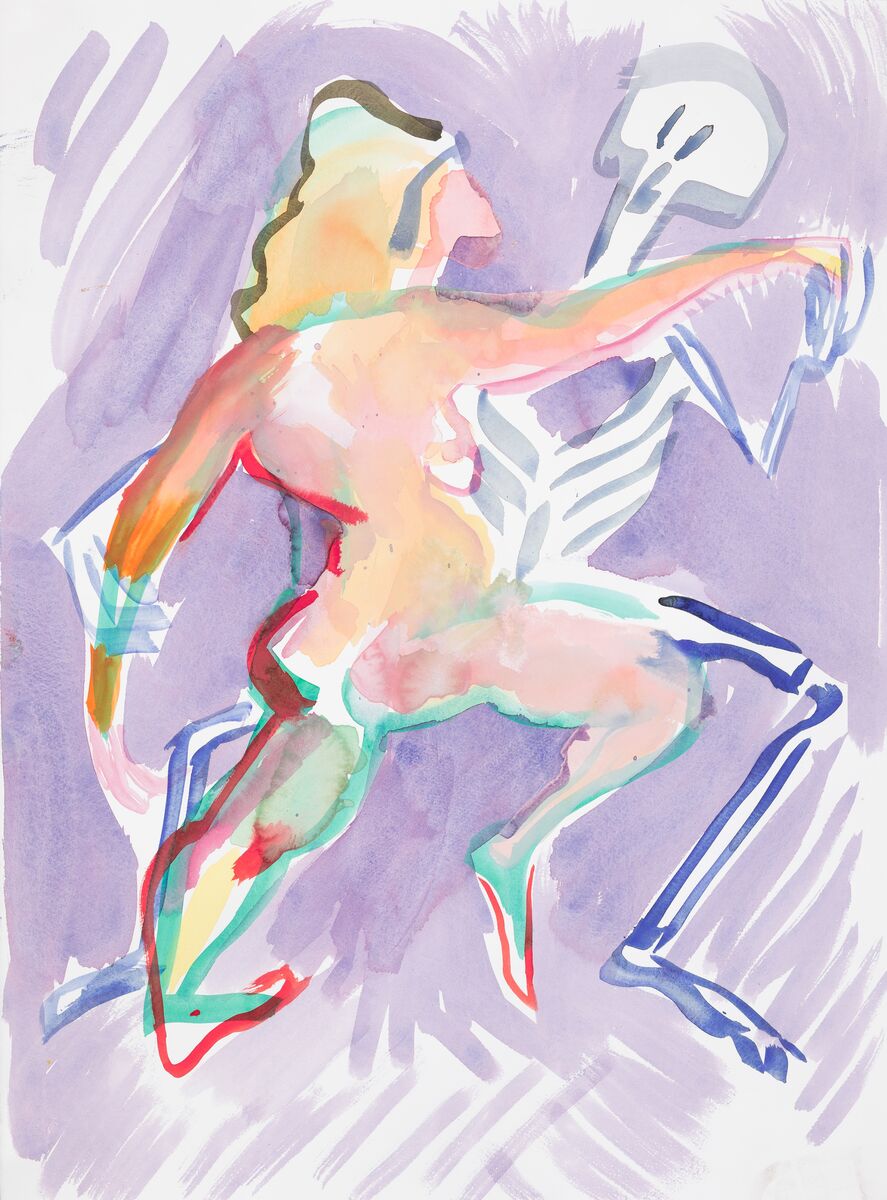 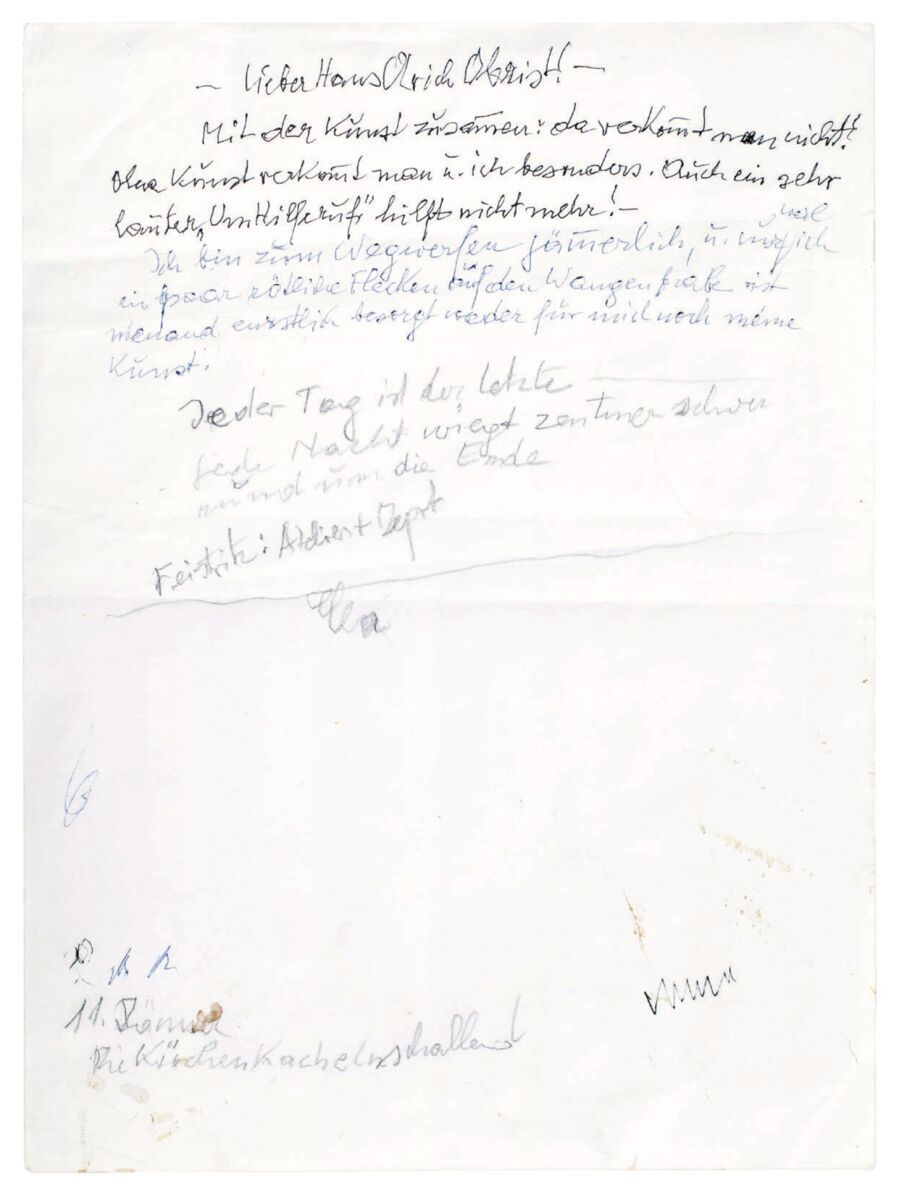 The Maria Lassnig Foundation sent Hans Ulrich Obrist an unfinished letter that was found on the artist’s desk after she died. It had been written, and re-written, but was never sent. ‘The last letter is so moving’, Obrist feels, ‘because, of course, she never sent it. It’s really a letter about the impossibility of living without art. She lived for art. She lived with art and she talks about the fact that it’s not possible for her to live without art. Without art, she’s wilting.’
The final letter is read here by New York-based artist Julie Mehretu, who currently has a travelling exhibition forthcoming at The Whitney Museum of American Art and The Walker Museum of Art.

Austrian actor Birgit Minichmayr reads the last letter, this time in the original German. Beginning her career at the Vienna Burgtheater where she has now returned, Minichmayr has appeared in numerous leading roles in theater and film, including at the Volksbühne Berlin and at the Residenztheater in Munich, and has previously read writings by Lassnig at our Zurich gallery.
When asked how he would have responded to this last unsent letter, Obrist recalls something Helen Levitt one said: ‘It’s so fascinating that we need art. We cannot live without art, without photography, or without film. We particularly need it in difficult times, like in times of precarity and in times of crisis.’ This totality and near existential reliance on art for survival is visible across Lassnig’s writing and oeuvre, and is particularly relevant in our current time where we might consider the quality of slowness these handwritten letters allow for profound reflection.

–
Available in print for the first time and translated in English, ‘Maria Lassnig. Letters to Hans Ulrich Obrist’ is edited by Hans Ulrich Obrist, Peter Pakesch and Hans Werner Poschauko for the Maria Lassnig Foundation, and published by Verlag der Buchhandlung Walther König, Cologne
‘Maria Lassnig. Me, Encircled by a Fly’, an exhibition presenting a selection of the artist’s works on paper and canvases between 1987 and 2005, is now open online.