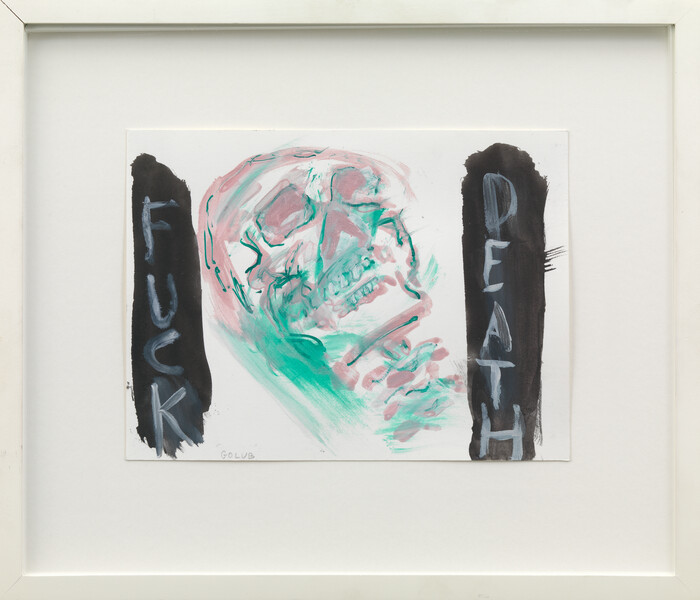 There is no way to write without writing about the pandemic. Everything is colored by malaise. An online article tells me that my untranslatable feelings about Covid-19 are in fact grief, but I am not sure. I feel language becoming strange or estranged to me, the anesthetized diction of a dream. Books arrive at my apartment, and I wipe down their covers obsessively with disinfectant, careful not to wet the pages.

When words feel unworkable, I reach out for images as lifeboats. Their immediacy feels more fathomable, somehow. I think about artists who made it their telos to give form to suffering and fear in all of its stripes—Käthe Kollwitz, who showed the gnawing effects of World War I on working-class people; David Wojnarowicz, who laid bare how AIDS could break a body; and Leon Golub, who depicted human brutality on a global scale. Right now, I want images that aren’t afraid to be bleak, unflinching. I want an image that I can’t look away from. 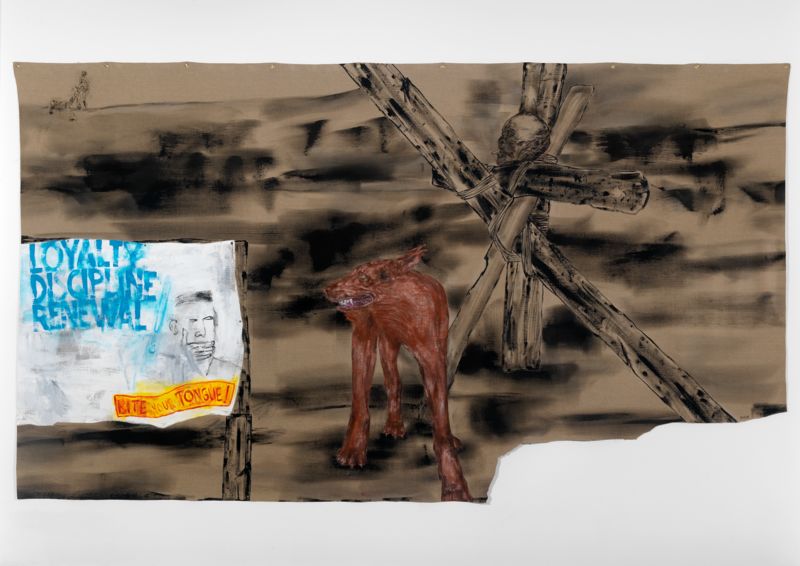 I go to open ‘Leon Golub: Bite Your Tongue’, a catalogue for an exhibition held at the Serpentine Gallery in 2015. I was living in London at the time and was fortunate enough to see the show in person. (I was also lucky enough to have relocated to New York in time to catch the Met Breuer’s Golub survey ‘Raw Nerve’ in 2018.) Like the show, the catalogue is comprehensive. It spans Golub’s career, from his paintings in the mid-1950s, just a few years prior to joining the Monster Roster collective in Chicago, to his works on paper from the early 2000s, when he abandoned large-scale painting for oil transfers made on a smaller, more manageable scale.

‘Right now, I want images that aren’t afraid to be bleak, unflinching. I want an image that I can’t look away from.’

At that point the aging artist had fallen ill, and mortality was on his mind. I flip to an oil stick drawing made in 2004, the year that Golub died. I am drawn to the image’s rusty palette, the color of sinopia underdrawings buried within frescos. In the work, a skeleton hunches over, his disjointed form contracted in pain or maybe laughter, his head tucked into his arm. Inscribed beside him is a line of gallows humor: ‘MAN! I’VE GOT TO GET MYSELF TOGETHER!’ A memento mori reminds us that someday we will die, but it also reminds us that we will be anxious about it for a very long time first.

Making a barely passable omelet and feeling desultory, I put on the news. Donald Trump, who calls himself a wartime president, has finally invoked the Defense Production Act, a mobilization effort first used during the Korean War, to produce much-needed ventilators. The ventilators will be deployed by American doctors on the front lines battling the disease. Warfare waged by pathogens against their human hosts presents opportunities for other kinds of violence. Right-wing chatter arises about the ‘China virus’ and making China ‘pay,’ because of the virus’s origins in Wuhan, a Chinese industrial hub. War hawks salivate as coronavirus conspiracy theories and ill-advised tweets sour the relationship between Trump and Xi Jinping. 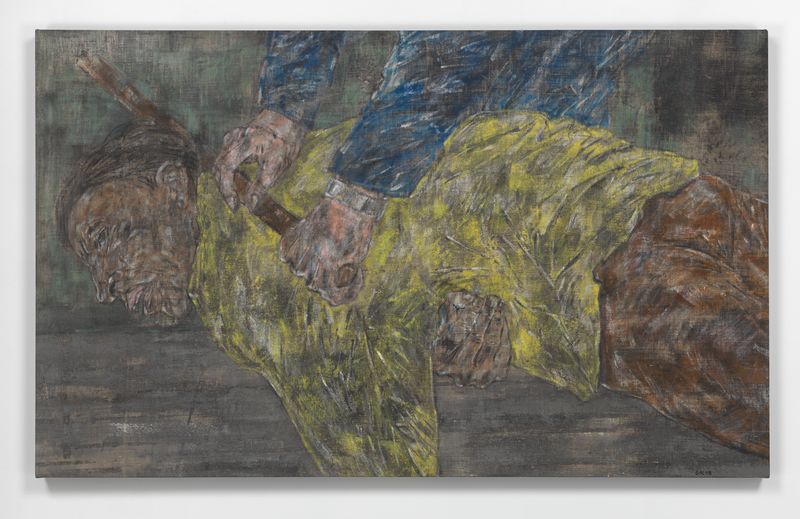 In the United States, prejudice against Asian Americans is on the rise; its national growth will undoubtedly mirror that of the infection. I learn that a man poured acid over an Asian-American woman’s head in Brooklyn, leaving her with chemical burns. A neologism—‘coronavirus hate crime’—has already been coined. There are smaller, quotidian violences, too: the hoarding of basic supplies like disinfectant and toilet paper, along with the associated price-gouging, or worse, the hoarding of personal protective equipment needed by medical professionals.

‘If I had to give a description of my work,’ said Golub, ‘I would say it’s a definition of how power is demonstrated through the body and in human actions, and in our time, how power and stress and political industrial powers are shown.’1 Golub revealed war to be embedded in men’s bodies. He depicted the physical bodies upon which social bodies—specifically, pathologies of power—are mapped. His paintings are populated by dictators, mercenaries, interrogators, terrorists, insidious right-wing ‘Everymans,’ and their victims. In later work, he funneled human brutality into animals: dogs with their hackles raised guarding skulls mounted on sticks; teeth-baring lions on the brink of devouring lone men; the eagle that returned day after day to claw out Prometheus’s liver as punishment for defying the gods, who were able to enact cruelties of which men could only dream. Violence extended to Golub’s application of the paint. He cut and tore his canvases, sometimes abruptly cropping figures at the edges of the picture plane. He eroded his paint with solvents and scraped at it with a meat cleaver or razor blades. When he depicts naked figures, their skin looks raw and flayed, palpably painful.

‘Golub … depicted the physical bodies upon which social bodies—specifically, pathologies of power—are mapped.’

I linger on several images, all of men. Five men, two of whom are bearing guns, stand in poses that range from nonchalance to casually contentious—one figure raises a hand, his mouth shaped in a hard O. Sometimes, the violence is more explicit. A bleeding man with burnt skin tumbles to the ground. A man dumps a dead body into the trunk of a car. Four men stand around a naked prisoner with a bag over his head; he is tied to a chair, the rope cutting into his flesh. One of the torturers has a cigarette in hand. Maybe he is about to take a drag, or maybe he is about to press the cigarette into the prisoner’s skin. One of the figures turns toward the viewer with an unnerving smile. 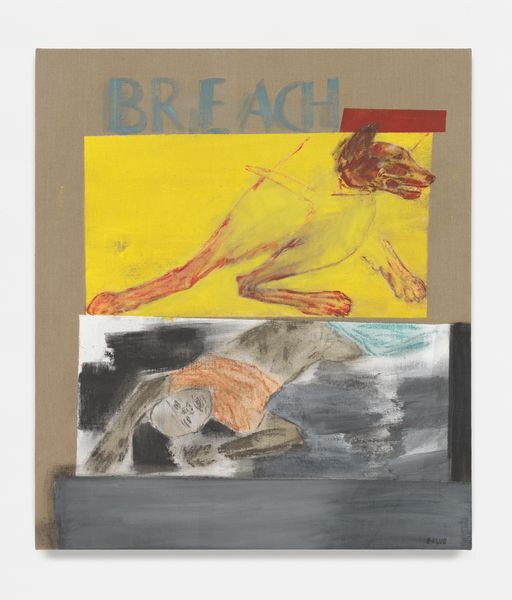 These paintings refer to particular instances of politicized bloodshed: corrupt U.S. counterinsurgency operations in Cold War-era Latin America; the U.S. Army’s use of napalm in the Vietnam War; the Salvadoran death squads backed by a powerful right-wing contingency during El Salvador’s civil war; and the physical and psychological abuse perpetuated by those operating under the guise of ‘freedom fighters.’ The violent scenes are intentionally specific, and Golub appropriated many of them from media images.

They are not directly comparable to our present-day scenario: a virus cloaked in wartime rhetoric that has caused mass death and served as a premise for hate crimes, that has in a matter of mere months laid bare the deep economic and racial fault lines lying just beneath global expansionism. But Golub’s devastating universality keeps the paintings in the present. He repeats physical characteristics across various men, making them seem interchangeable regardless of the brand of oppression at play. He often poses his subjects against a signature red oxide ground, displacing them in time and space so that they could be anyone, anywhere. Taken as a whole, his work digs into the deep-rooted brutality that links society and self, particularly as it manifests in perennial toxic masculinity. 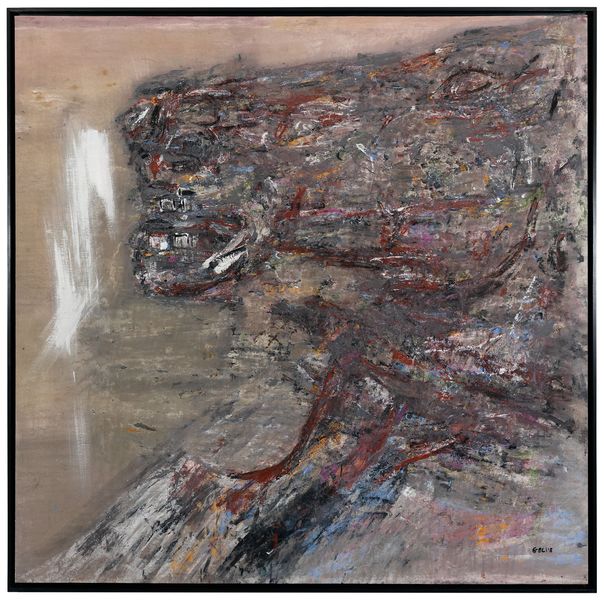 It is not only ignorance but also a dangerous, politicized machismo that led Trump to declare that he would not wear a protective mask—in the midst of his announcement that the Centers for Disease Control was advising Americans to wear face coverings to prevent transmission of the virus. I think about the people, particularly men (most recently Vice President Pence) who now view mask-wearing—which, in this case, means caring for fellow humans—as symptomatic of weakness, perhaps even un-American. I wonder how many of them are asymptomatic carriers of the virus. I wonder if Golub would paint them.