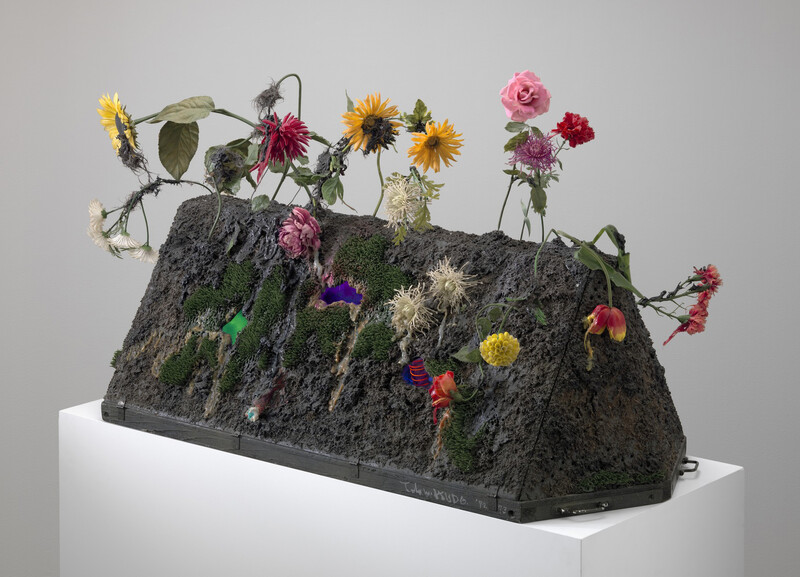 ‘No matter how, it is important to think about the relationship of polluted nature to the proliferation of electronics’, Kudo states, ‘the decomposition of humanity (humanism) and the old and traditional hierarchy of values.’ Tetsumi Kudo’s message from fifty years ago demonstrates the artist’s exploration of new possibilities for humanity, and a form of metamorphosis, out of an increasingly polluted and consumption-driven world.

Kudo was born in Osaka in 1935 to parents who were painters and educators. Studying at Tokyo National University of Fine Art during the mid-1950s, he maintained a contrary attitude toward traditional pedagogy, cultivating the persona of a lone rebel and supplementing his education by reading pamphlets on astrophysics, set theory, and quantum mechanics. In paintings, often created during happening-like performances, and sculptures that incorporated scrap wood and store bought objects such as gloves, brushes, and plastic salad bowls, he sought to critique consumerism and political conformity. Kudo formed a body of work that would come to be defined by experience rather than commercial value. 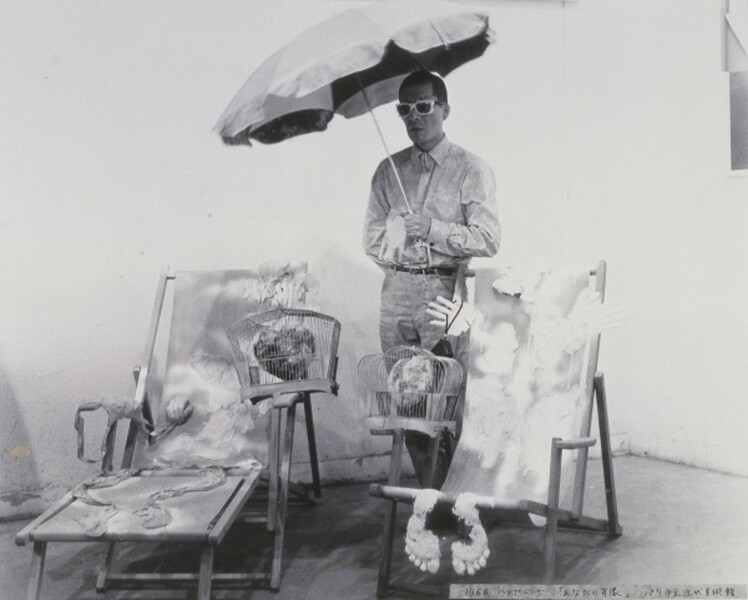 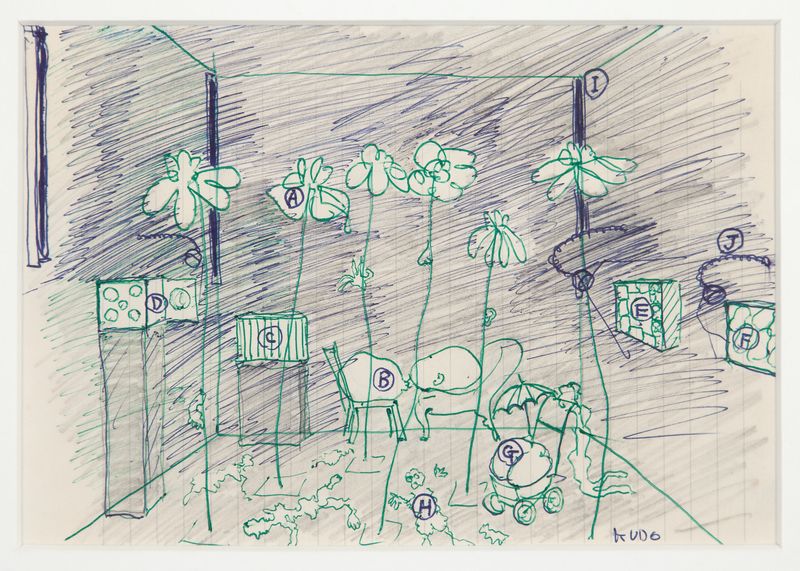 In 1962, Kudo and his wife, Hiroko, moved to Paris. He quickly began exhibiting in France and Holland, often presenting happenings attended by, among others, Marcel Duchamp and the venerable gallerist Ileana Sonnabend. In 1966 at the Salon de Mai, for example, he held a parasol while standing  in his installation of deflated ‘human’ skins splayed on deck chairs. During his 1970 retrospective ‘Tetsumi Kudo: Cultivation by Radioactivity’ at the Kunstverein Düsseldorf, he sat in front of a birdcage smoking cigarettes while a wax face inside slowly melted. When the face had collapsed completely, he served champagne to the audience. Kudo’s Happenings were concurrent with those of Allan Kaprow, whose ‘Fluids’ (1967) possess a similar temporal intensity. 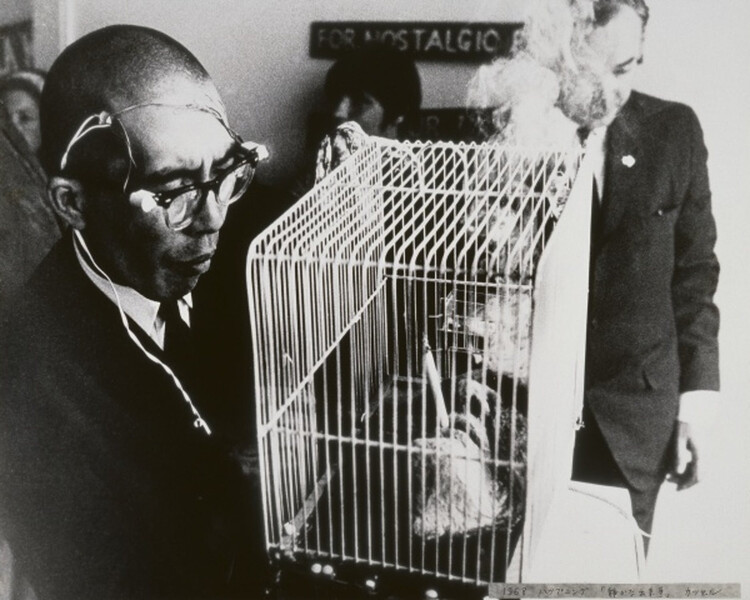 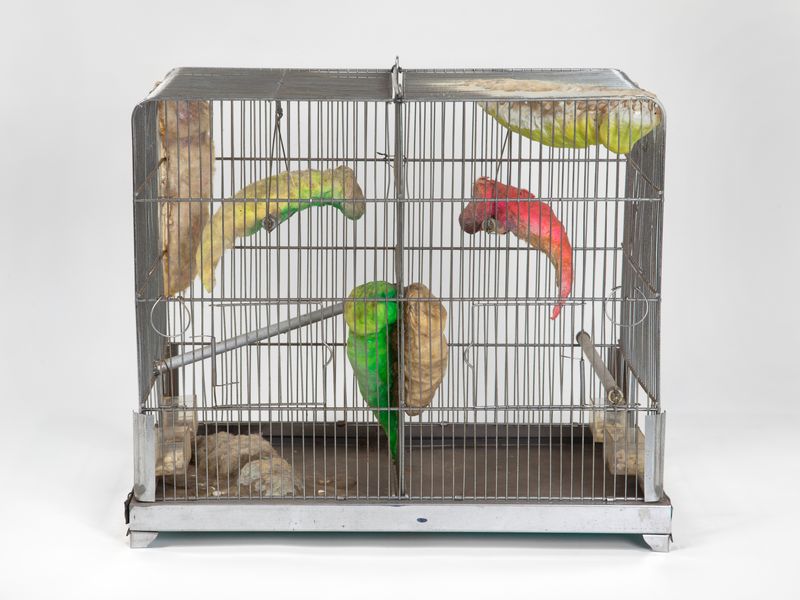 In Europe, Kudo came to believe that the primacy of man over nature, life over death and creation over destruction implicit in European Humanism was false, and that our failure to understand the world holistically was the root cause of colonialism, racism, and environmental degradation. In response, he developed series of works incorporating hair swept from barbershop floors, transistors and vacuum tubes found in the trash, and store bought items like dolls and kitchenware.  These items were combined with body parts molded from paper mache, cotton, and resin and arranged in boxes and cages to form allegorical vignettes of contemporary capitalist lifestyles. The Japanese critic, Nakahara Yusuke believed Kudo’s use of consumer items and fragmentary body parts such as phalluses, hands, noses, and eyes, created a ‘psychological gap’ or feeling of discontent on the part of viewers.
Kudo believed artists had a responsibility to challenge viewers, rather than to make art  ‘for art’s sake. In an interview from 1971 he said: ‘Art must be one of the media that serve to provoke doubt and defiance in us: it is a provocative communication between you and me, who are living in the septic pit of technology. In this sense, art is a maquette through which we reflect, and question everything. Doubt everything. What is our place in the universe? What is human freedom in the universe? What is individual freedom in society?’ 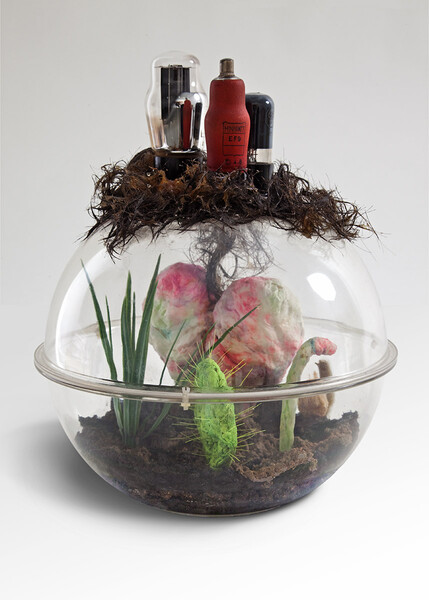 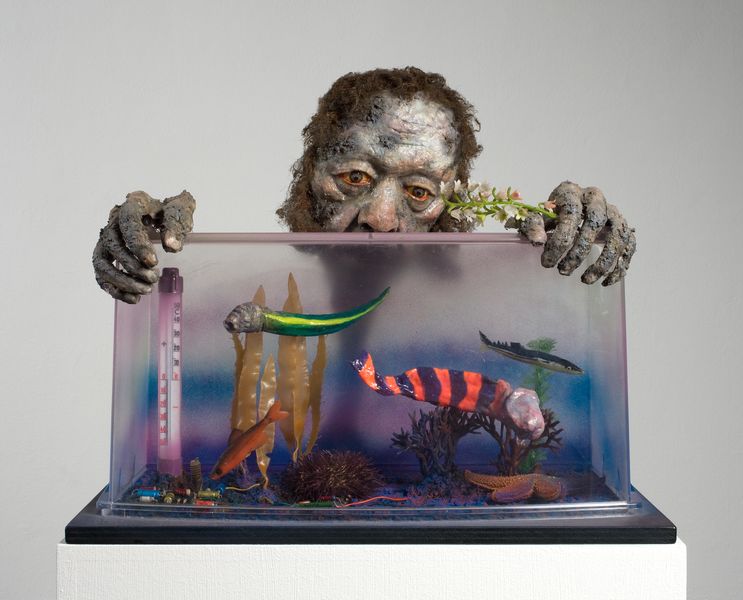 In 1969, June, Kudo returned to Japan for nine months during which he created ‘Monument to Metamorphosis’, a massive carving on the shear face of Mt. Nokogiri North of Tokyo. Resembling a giant phallus and a cocoon the piece expresses his belief that people must shed a selfish belief in individuality. He returned to Europe the next year, and in April his first major museum retrospective opened at the Kunstverein für die Rheinlande und Westfalen in Düsseldorf. In the following decade, he continued to explore the relationship between the man made and the natural, creating major works such as ‘Cultivation’, ‘Your Portrait’ (1974) and ‘Human Bonsai—Freedom of Deformity—Deformity of Freedom’ (1978).
Kudo mounted a second major retrospective at the Stedelijk Museum, Amsterdam, in 1972. The catalog reproduces his hand written text ‘Pollution – Cultivation – New Ecology’, in which he states: 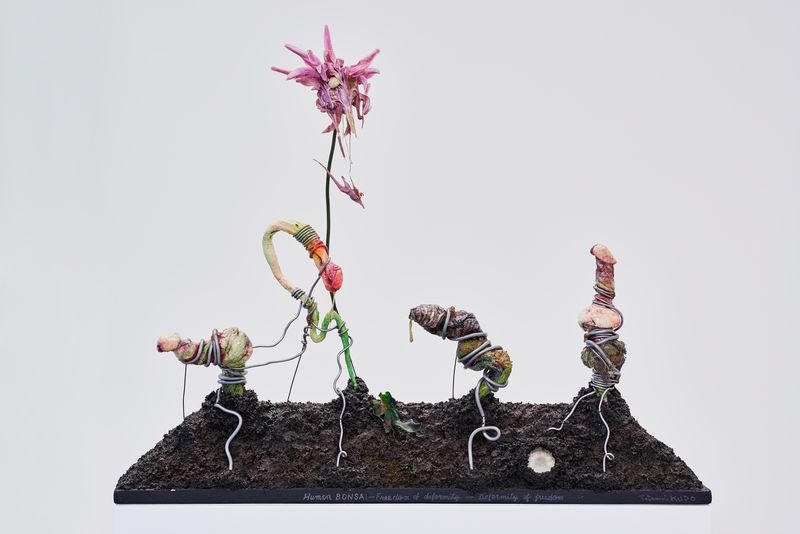 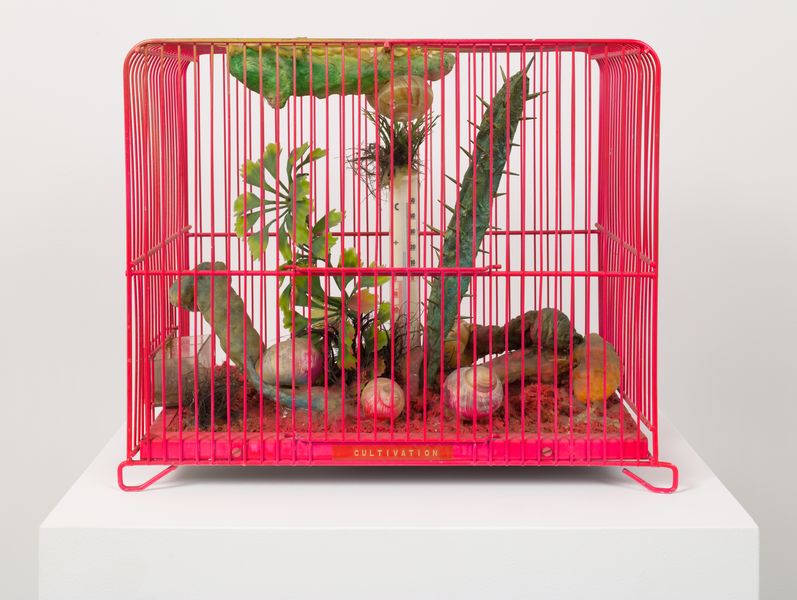 ‘Kudo’s works looked less like sculpture than like movie props from lurid science fiction films. They did not resemble any other contemporary sculpture I was familiar with, and I admired them greatly.’—Mike Kelley

Kudo’s influence on a younger generation of artists, including Paul McCarthy, Takashi Murakami and Mike Kelley, is unbounded. ‘Kudo’s sculptures were garish, almost psychedelic in coloration—painted with fluorescent pigments and incorporating brightly hued cheap plastic items and fabrics,’ Kelley reflects. ‘I had never before seen sculpture that utilized such colors, especially aligned with this kind of subject matter. Kudo’s works looked less like sculpture than like movie props from lurid science fiction films. They did not resemble any other contemporary sculpture I was familiar with, and I admired them greatly.’
Tetsumi Kudo’s legacy and influence is not only evident in the critique of consumerism in the practices of artists such as Kelley or McCarthy, but also gains new cogency and relevance with the climate crisis. His work brings environmental destruction and the effect of technology, industry, and mass consumer consumption on our lives to center-frame. As the 2020 pandemic halts economies across the world, bringing us to question our ways of life, we might look to Kudo’s regenerative artistic philosophy for guidance. Out of historical crisis, a period of change—‘A New Ecology’—can arise. 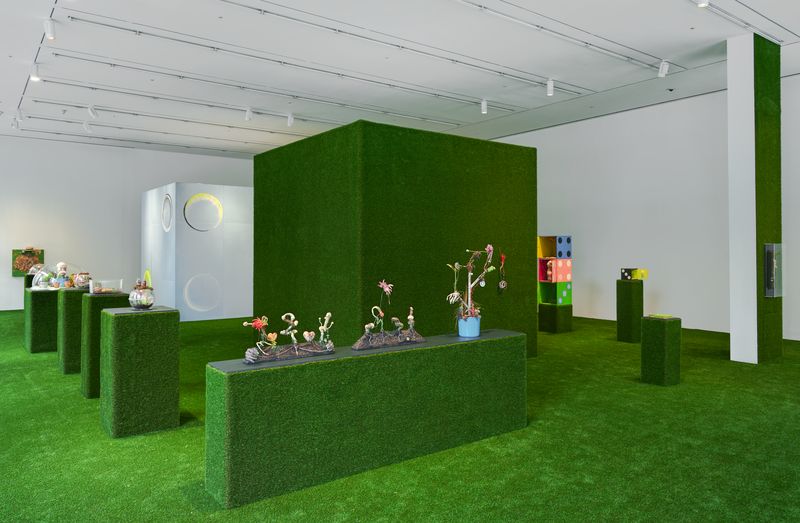