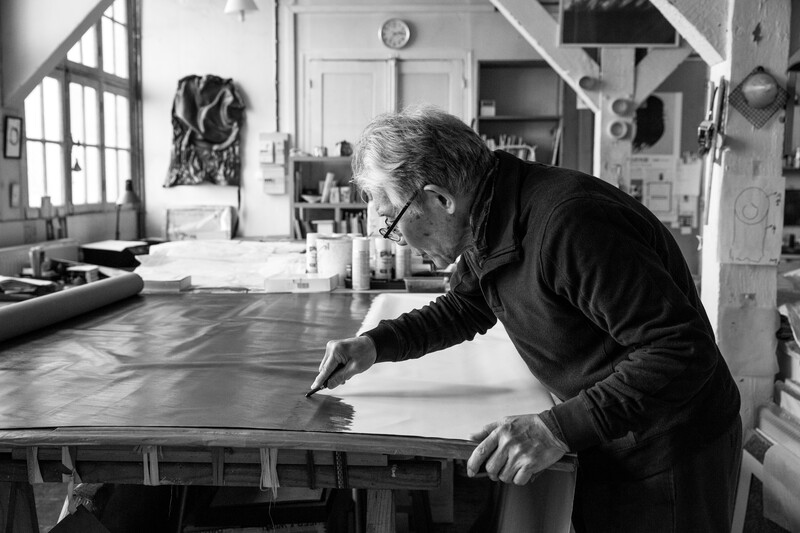 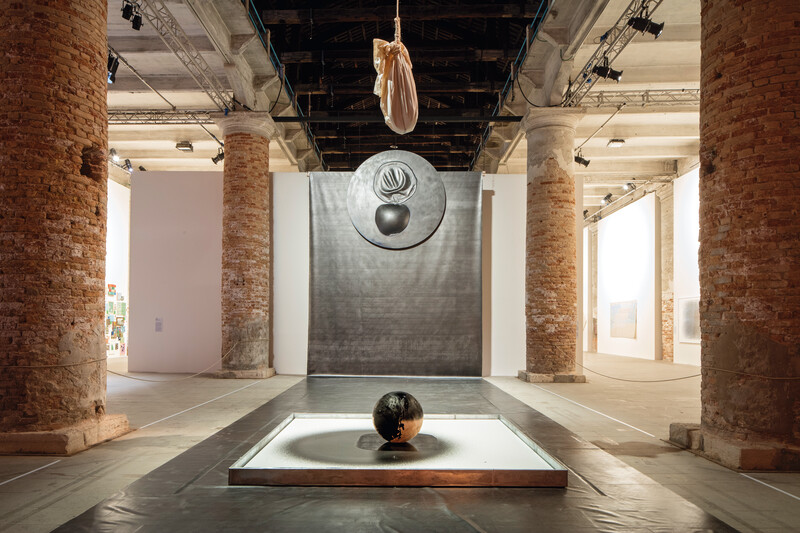 Graphite may be rudimentary, but it is rich in expressive qualities. It allows for a great freedom of execution, but Matsutani leaves out altogether the figurative tradition to focus on the intrinsic characteristics of the medium, especially its soul and its materiality, avoiding overly expressionist or dramatic effects. These are all the more useless in that the black metallic reflections give the tracings (which are clearly visible) a tactility and inner luminosity very different than that of the ink Matsutani was to use extensively in the following years. The successive layers produce a sense of volume through the interplay of shadows and the direction of the pencil strokes. A way to suggest three-dimensionality on a flat surface that Matsutani says he acquired in Europe, while critics consider it as a very Japanese technique. Thus began the long black bands in stark contrast against white paper, plain rectangles at first, but becoming increasingly imposing over the years, until they reached a climax in 2017 with ‘Stream-Venice’, a majestic installation conceived for the International Pavilion at the Venice Biennale that year.
The graphic process of the Streams series marks Matsutani’s return to the experiments of his youth, whether the calligraphy he learned at school or the multitude of drawings he made during his artistic training, for the most part autodidactic, while he was confined at home by tuberculosis. Calligraphy had allowed him to perceive the inexhaustible possibilities of black and white. Paper and ink are basic tools of Japanese writing and art, and the white, the spaces which are deliberately left empty, are as primordial as the black in the Chinese and Japanese traditions. In France, Matsutani’s intense reading of Junichirō Tanizaki’s celebrated ‘In Praise of Shadows’ (1933) persuaded him to reconsider the heritage of his native culture through the prism of geographical distance, ‘honestly’ as he put it, without nostalgic or opportunistic use of facile clichés. 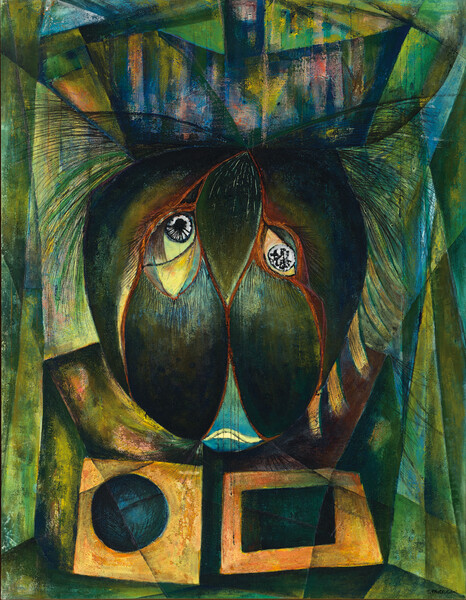 Above all, there is another, much more profound link between the Streams and Japanese thought: these works are based on the Buddhist concepts of the vital breath, the impermanence of things, and the eternal cycle of life and death. In Buddhist teachings, existence is seen as a constantly changing current, inscribed in the universe’s uninterrupted flux. Like a demiurge, Matsutani attempts to stop time, to materialize a fragment, a suspended moment, on the paper’s surface. A challenge that may appear a lost cause, but to which he commits with determination. Matsutani defines his own life as a fluid movement symbolized by the laborious pencil strokes whose fastidious repetition induces a physical pain that he actually considers stimulating. As Alain Jouffroy wrote ‘Matsutani thinks and feels everything he paints because it springs from his own will to live. Thus he does not make a painting, he experiences it physically and mentally.’ [5] This is possibly a consequence of the difficult years spent by the artist struggling with illness during his youth, a dazzling expression of victorious joy, and his awareness of the fragility of existence. As Matsutani explains:
‘After having made my ‘all-pencil’ pieces, I was seized by a mad desire to expand my work on an environmental scale. This enlargement would allow the addition of an element of visual surprise and give me a chance to work in a precise and disciplined fashion for a length of time that would be determined solely by my subjective feelings… First I decided to use white paper, 10 meters by 1.5 meters in size, and lead pencils, because of their purity. Then came the daily labor of making pencil strokes, first going in one direction and then the other, to fill in on this paper a strip 80 centimeters high, finally producing an uninterrupted river of black graphite. Moving my hand the same way at the same rhythm day after day. This work is rigorous, precise, sometimes painful, but for me there is meaning in this kind of trial by disciplined, repetitive movement. The band I make is like a moving, flowing river. The idea of a river that is always changing, where each atom is in perpetual motion, with no beginning and no end, reflects deeply rooted attitudes and beliefs in my culture.
But the paper is bounded: 10,000 by 1,500 millimeters. So when I come to the end of the sheet, I have to intervene to indicate this river’s continuous flow, its never-ending movement—all that on a piece of paper. I do that at the very moment when I have to destroy this continuity that I wanted to imitate, day after day, by bringing in its contrary, which is also a truth. I pour white spirit on the graphite at the far end of the paper. The flow becomes chaotic; it cannot be stopped. The results of my strict rhythm, my precise movements, are now out of my control. Everything runs off the paper, insistent, undisciplined.’ [6] 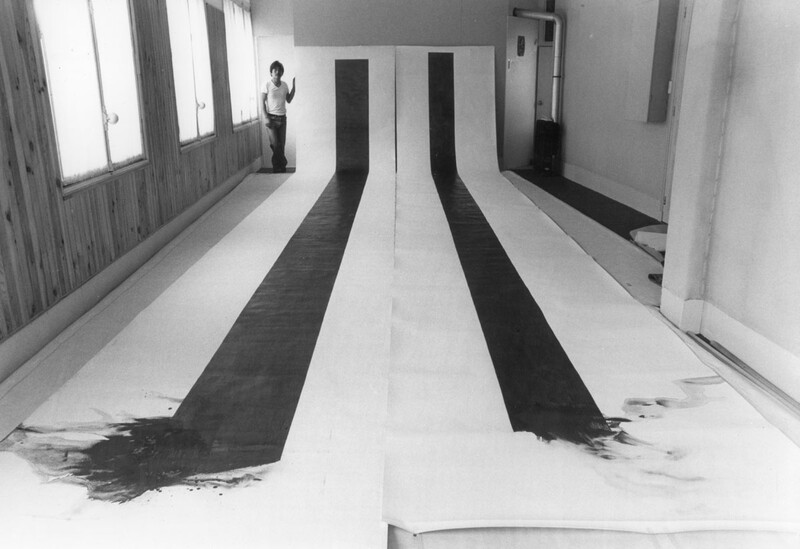 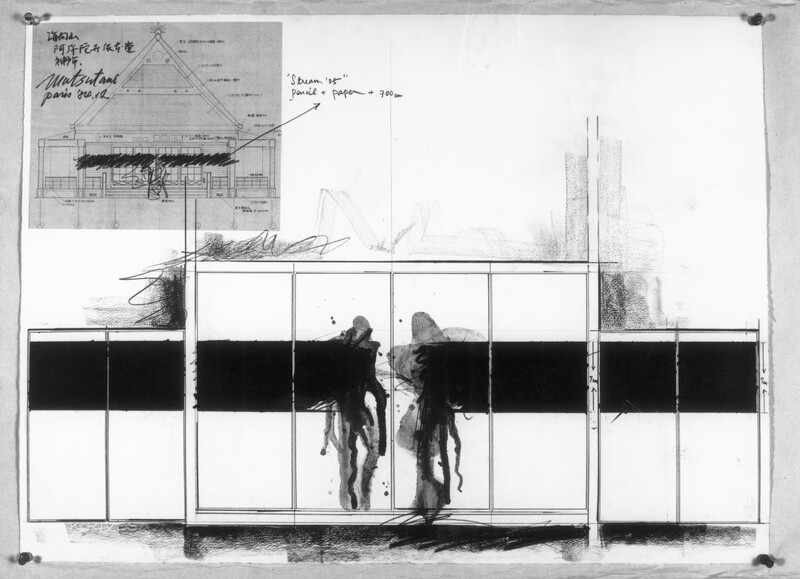 Paradoxically, the infinite current of life must therefore come to an end when it is brought back to material reality and two-dimensionality. If that might seem easy on a small-format sheet of paper, it is very different in the kind of monumental work that Matsutani began to make in 1977 (the date of ‘Stream-1’), when he discovered the long rolls of paper produced by Canson, a new medium that allowed him to expand his self-assigned task to new dimensions. The gesture, basically always the same, is repeated over and over again until it becomes a kind of meditative practice; but the artist’s final intervention draws the pencil strokes into a maelstrom that liberates and irremediably metamorphoses them. The slowness inherent in the production of the works gives way under a liquid assault, a latent power suddenly explodes. The Streams are like existence itself, sometimes peaceful, sometimes tempestuous. Rather than a ‘noble’ material, Matsutani opts for the most mundane cleaning fluid to complete his work, diluting the far end of the black currents with white spirit, or, later, turpentine, until it becomes liquid. The graphite unfurls in more or less turbulent cascades, running down the wall and to the floor, momentarily uniting the work with its surroundings. The creative gesture becomes a performance.
–
Art historian Valérie Douniaux has worked as a writer and editor on numerous books and articles, and currently oversees Matsutani’s archives. Holding a doctorate in the history of Japanese modern and contemporary art, Douniaux taught at the Charles de Gaulle University, Lille III. She has also curated exhibitions of Japanese artists in France and Belgium, and of French artists in Japan.
Translated from French by Leo Stephen Torgoff.