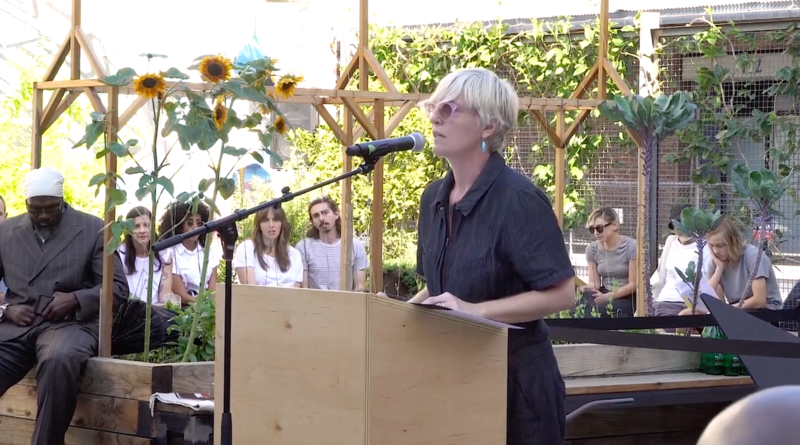 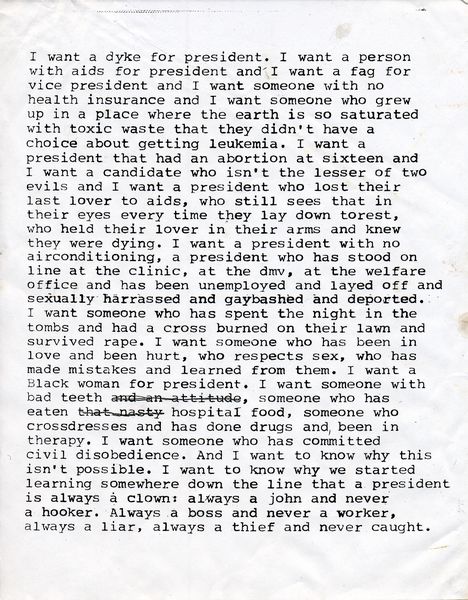 ‘Self care is great, our rage is greater’, Helen Molesworth prefaces her reading at Hauser & Wirth Los Angeles in 2018. The event ran concurrently to the exhibition ‘Zoe Leonard. Analogue’ and in anticipation of the 2018 midterm elections.  The recording above captures an esteemed group of curators, writers, performance artists, poets, and activists, interpreting the contemporary significance of Leonard’s work—powerfully enlivening its social, historical, and local impact.
Helen Molesworth, former head curator of The Museum of Contemporary Art, Los Angeles (MOCA), and author of the canonical text How to Install Art as a Feminist reads and introduces ‘I want a president,’ highlighting its art historical implications within the current political moment. Surmising that the audience was largely left-leaning and like-minded, Molesworth notes that she might be preaching to a choir, however, she aptly reminded visitors that choirs have some of the strongest, loudest voices. From poems to personal accounts to performances, every participant shed light on the ways in which the current political climate affects their lives and communities.
Curator Kimberli Meyer discusses her former directorship at the University Art Museum at California State University, Long Beach (CSULB) from which she was unceremoniously dismissed, an event that sent shockwaves throughout the Los Angeles art community. Meyer reads a text by the artist Lauren Woods and spoke about the last project they collaborated on at CSULB.

Patrick Staff and Amy Gerstler present poems. Staff spoke about their experience as a trans-person from the United Kingdom and read ‘Knots,’ a poem by RD Laing. Gerstler, a highly celebrated poet in the United States reads ‘Return to Lesbos,’ written by Ed Smith in the early 1980s. In expressing creative frustrations during the Reagan years, ‘Return to Lesbos’ complements the subject and tone of Leonard’s ‘I want a president.’ Similarly reflecting on a specific election, art historian Andy Campbell debates if and how he would return to class the day after Trump’s victory in 2016, in a letter addressed to his students.
Lita Albuquerque, along with four alien-like performers, reads her own version of ‘I want a president.’ A week after this event, Lita lost her home and studio in the Malibu Woolsey fire. Nao Bustamante donned ‘hamburgers hands’—made of hamburger buns, lettuce, and packing tape. While chanting ‘it’s okay to live in California,’ ‘is it too sunny? here… have an umbrella,’ she demonstrated the soothing power of rubbing them on audience members and provided some much needed comic relief.
Bidhan Roy, founder of WordsUncaged and Director of Cal State Los Angeles’ Bachelor of Art’s program at Lancaster State Prison, sheds light on the incarcerated men in his program, and reads a text they wrote for the occasion. Introduced by Roy, Tobias Tubbs, who was released from Life Without Possibility of Parole after thirty years, had been a free man for only twenty days when he stood up in the crowd and discussed his life of incarceration. Another former prisoner, Gernay Quinney, recounted his story to a speechless and visibly inspired crowd. 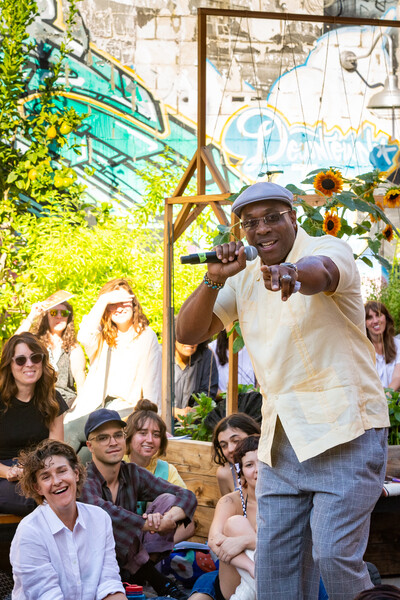 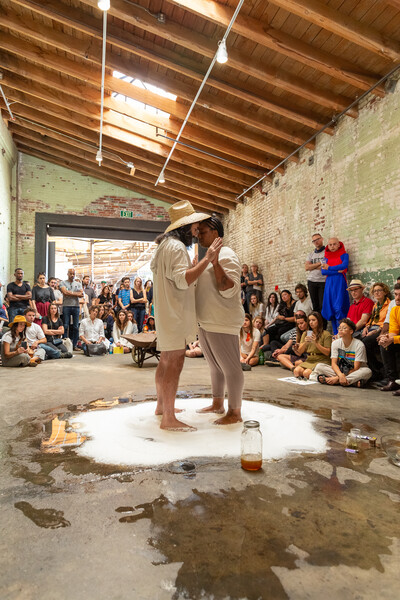 The artist, Edgar Heap of Birds reads from his series, ‘Active Shooter Custer,’ which referenced the slaughter of native peoples by the United States Army during the Battle of Little Bighorn, but also served as a stark reminder of gun violence in our society today, and the near absence of Native Americans in our current political and cultural systems.
Performance artist and co-founder of Black Lives Matter, Patrisse Cullors, and artist Noé Olivas pass a mixture of honey water throughout the audience for members to sip while repeating ‘it’s dangerous times. We have to stay connected.’ A poignant metaphor, emphasizing the importance of community, the bonds of shared experience, and the power of a simple gesture thus concluded the afternoon. Though saddened by its continued relevance, Zoe Leonard participates and reflects on the multitude of creative endeavors generated by ‘I want a president.’
–
‘Zoe Leonard. The ties that bind’ is our third online exhibition, featuring works from the artist’s landmark survey at the Whitney Museum of American Art, New York and the Museum of Contemporary Art, Los Angeles in 2018. Leonard has been rewarded a 2020 Guggenheim Fellowship for her work in the field of photography.