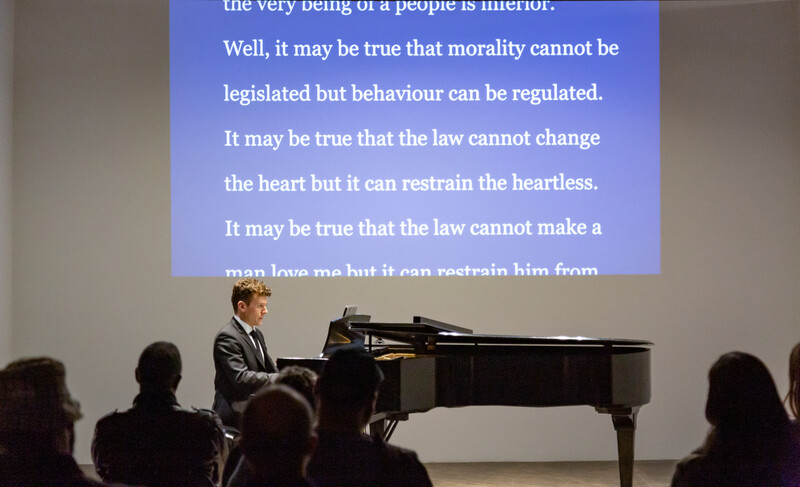 A pivotal figure in the field of Conceptual Art, Charles Gaines’s body of work engages formulas and systems that interrogate relationships between the objective and the subjective realms. Reflecting on his personal history, Gaines observed that ‘one thing that made me different from other conceptual artists is that I was not shying away from language or meaning or content’ – a truth perhaps best exemplified by ‘Manifestos 3’ (2018), a multimedia installation that illustrates his interest in music, language, and visual art.

During the final weeks of 2019, Hauser & Wirth Los Angeles debuted the first ever live musical performance of ‘Manifestos 3’ and a new composition ‘Visionary Recital for Piano’ (2019), composed by Gaines, on the occasion of his first exhibition with the gallery, ‘Palm Trees and Other Works.’
Celebrated pianist Richard Valitutto performed the musical notations of Gaines’s systematic transliteration of revolutionary manifestos in ‘Manifestos 3’: Martin Luther King, Jr.’s speech from 1967 and James Baldwin’s essay ‘Princes and Powers’ (1957). By converting these powerful and poignant texts into music, Gaines unites the rational, mathematical, and lyrical structures of music with the irrationality of violence, racial tensions, and social injustice. 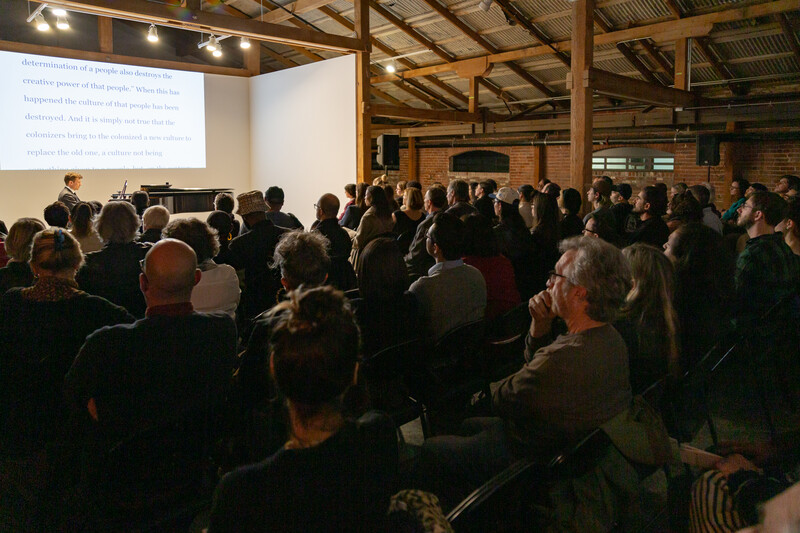 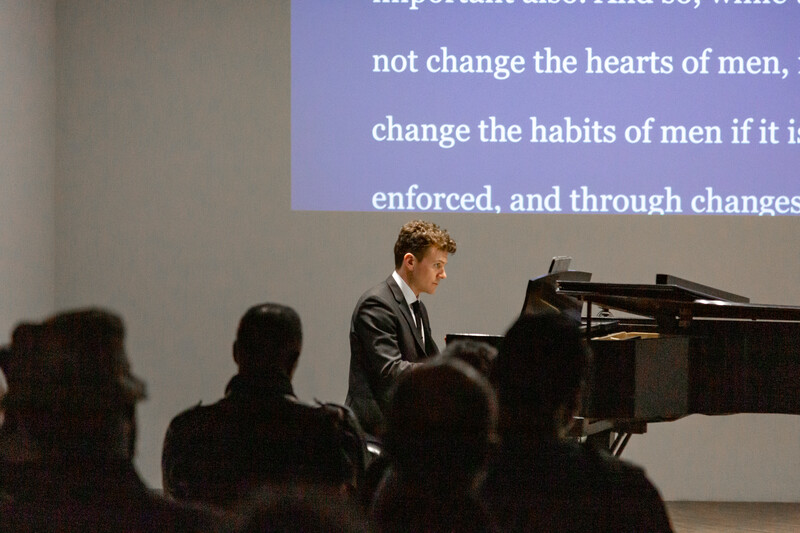 While the texts scrolled on a projection screen, Valitutto played the composition arranged by Gaines using a rule-based system. To create the musical composition, Gaines transcribes letters ‘A – H’ from the text into their equivalent musical notes.The use of the letter ‘H’ represents the code used in early Baroque tradition for B-flat. All other letters and spaces between words are noted as rests or silent beats. While the resulting composition does sound intentional, it is controlled only by the preconceived notation system that follows the compositional structure of language. This produces the fluidity that the audience hears. By converting these powerful and poignant texts into music, Gaines unites the rational, mathematical, and lyrical structures of music with the irrationality of violence, racial tensions, and social injustice.
Gaines also debuted the brand new composition, ‘Visionary Recital for Piano’ (2019), which utilizes the same system of transcription and musicalizes the words of legendary conceptual artist and musician, Terry Adkins. 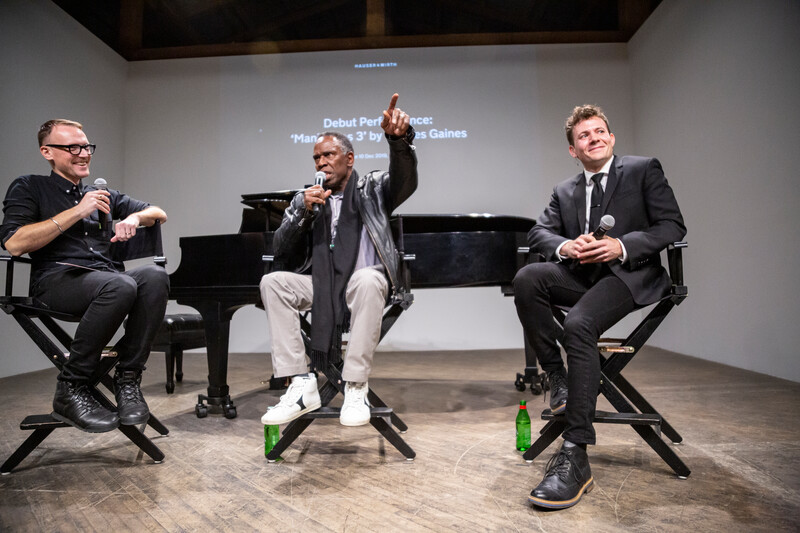 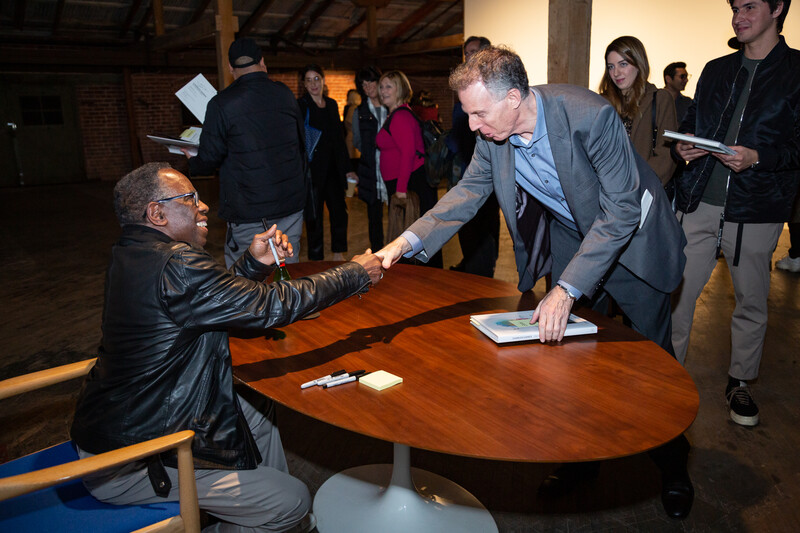 Following the performance, Gaines and Valitutto participated in an in-depth discussion about the ideas explored within the ‘Manifestos’ series, moderated by Russell Salmon, Events Manager at Hauser & Wirth Los Angeles. Gaines also signed copies of a brand new exhibition catalogue, as part of a launch for the new book from Hauser & Wirth Publishers ‘Palm Trees & Other Works’.
Previous performances from the Manifestos series have taken place at the Hammer Museum, Los Angeles CA; Museum of Modern Art, New York NY; REDCAT, Los Angeles CA; and The Village Vanguard, New York NY. ‘Manifestos 4’ will be performed at the San Francisco Museum of Modern Art, San Francisco CA in 2020.

Program
‘Manifestos 3’ (2018)
Martin Luther King Jr. speech at the University of Newcastle on Tyne (1967)
Written and arranged by Charles Gaines

‘Visionary Recital for Piano’ (2019)
Written and arranged by Charles Gaines 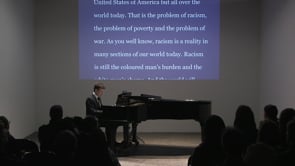 About ‘Charles Gaines: Palm Trees and Other Works’ from Hauser & Wirth Publishers
Published alongside Charles Gaines’s 2019–20 exhibition at Hauser & Wirth Los Angeles, this monograph charts the evolution of the palm tree in Gaines’s work from the 1980s to the present. In a new text, David Platzker explores the cultural and art historical contexts of the series, particularly the recent ‘Numbers and Trees’ works, shown for the first time in Los Angeles, that take palm trees as their subject. Also featured is a conversation between Gaines and Cherise Smith, which delves into the conceptual underpinnings of the artist’s work. Additionally, this publication documents and discusses other works from Gaines’s decades-long career, including the ‘Manifestos’ series (2008–20), exploring the threads that unite various parts of his practice.
Click here to purchase.

Photo: Fredrik Nilsen
About Charles Gaines
A pivotal figure in the field of Conceptual Art, Charles Gaines’s body of work engages formulas and systems that interrogate relationships between the objective and the subjective realms. Using a generative approach to create a series of works in a variety of mediums, he has built a bridge between the early conceptual artists of the 1960s and 1970s and subsequent generations of artists pushing the limits of conceptualism today.
Gaines lives and works in Los Angeles, and has been a member of the CalArts School of Art faculty since 1990. He has been the subject of numerous exhibitions in the United States and internationally, and his work is in prominent public collections including the Museum of Modern Art, New York, the Whitney Museum of American Art, the Studio Museum in Harlem, and the Los Angeles County Museum of Art, Los Angeles. Gaines’ work was presented at the Venice Biennale in 2007 and 2015.

Photo by Joshua Lipton
About Richard Valitutto
With a focus on contemporary keyboard performance, including organ and harpsichord, Grammy-nominated pianist Richard Valitutto is a soloist, chamber musician, vocal accompanist, and composing/improvising creative with an active performance schedule that spans both coasts of the US, across the country, and abroad. Described as ‘a keyboard superstar’ (The New Yorker), and as a ‘vivid soloist,’ ‘vigorously virtuosic,’ ‘quietly dazzling,’ and ‘all around go-to new music specialist’ (LA Times), he is a member of the critically acclaimed Wild Up Modern Music Collective and the ‘startlingly versatile’ (NY Times) quartet, gnarwhallaby. He regularly performs modern and contemporary art song with various singers and concert series. Richard is currently in residence at Cornell University’s Keyboard Studies DMA program. He holds degrees in piano performance from the California Institute of the Arts (MFA) and the University of Cincinnati’s College-Conservatory of Music (BM, summa cum laude).