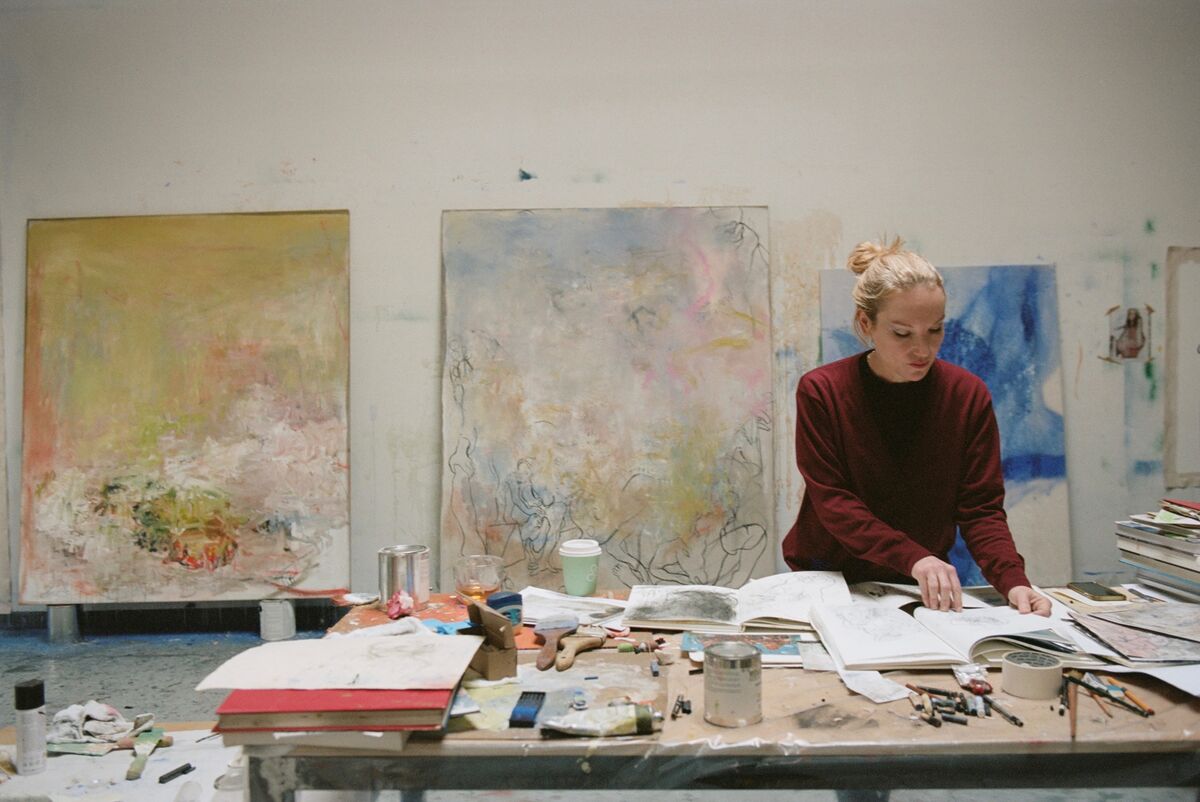 Coinciding with her New York exhibition, Hauser & Wirth Publishers presents ‘Rita Ackermann: Mama.’ The publication features contributions by the artist herself as well as Scott Griffin and long-time friend Harmony Korine. Excerpted below, Korine imagined and transcribed a fake interview between himself and the artist.

me: rita it’s so nice to bump into you like this on the streets of the Philippines.

rita: crazy random. on this street.

me: why are you in Manila now?

rita: because my new studio is in Manila. i wanted to leave New York for a while.

me: how did you end up here though?

rita: my close friend and collector Jinkee Pacquiao built a private museum 20 feet underground. it is the size of two football fields in a subterranean bunker across from the Pulangi dog racing track. the inner walls are lined with 14-karat gold leaf. the air is very thin down there. oxygen is pumped in. she commissioned me to make a neon-colored replica of the Cagayan River that runs parallel to her childhood home.

me: wow. her husband is Manny the Boxer?

me: i notice you drive a Bentley now?

rita: yes but only while I’m living in Manila.

me: i have never seen a Bentley this color.

me: what is the color?

me: it makes your Bentley almost feel as if it’s floating.

rita: correct. it has an optical levitation effect. there is only one place in this entire region that can access the specific color. it took them four months to paint the car correctly and detail the specs out. when i drive it almost gives the appearance of color field shape-shifting. i’ve had several police officers in Manila decline to write me speeding tickets because of how entranced they are.

me: also the odd thing about your car is that its manual transmission for some reason shows 21 gears. why is that?

rita: good question. i will have to tell you the answer at a later date though.

me: i notice you use this color a lot in your new paintings.

rita: yes yes. it is a magnified distillation of every color in the Hungarian flag. i only worked with this spectrum of colors on the new series of paintings.

me: you are referring to the Mama paintings?

me: i heard a rumor at a bar here from someone who claims she was your studio assistant.

me: yes about the source of your inspiration for this new work.

rita: yes Maala. she is a bartender and also an amazing sculptor. she has a big mouth though. she loves to spread lies.

me: she said you had contact with ‘baby gray’?

rita: actually this part is true. Maala was actually with me when this happened. we were on a fishing expedition outside Davao City.

rita: i caught a fish. but when we reeled it in it was identical to baby gray alien.  like a miniature version of what was in Close Encounters of the Third Kind.

me: yes this is the story i heard. there was an article about it in the local paper here that i also read.

rita: yes i only did one interview but it spread like wildfire across the Philippines. even the president mentioned it anecdotally in his state of the union speech here.

me: what happened to baby gray?

rita: while we were unhooking his lip he stared at me in the most amazing way. he gave me the idea for the Mama paintings. then he shot up toward the clouds.

me: crazy. i had a similar experience in junior high school.

me: i have to catch a bus to Caloocan now.

rita: that is the motorcycle dealership capital of the Philippines.

me: yes exactly. it is also where i’m learning to speak Tagalog.

rita: they have a great local dessert there made of fudge and fish.