From Space to Place: The in-between architecture of Rozana Montiel 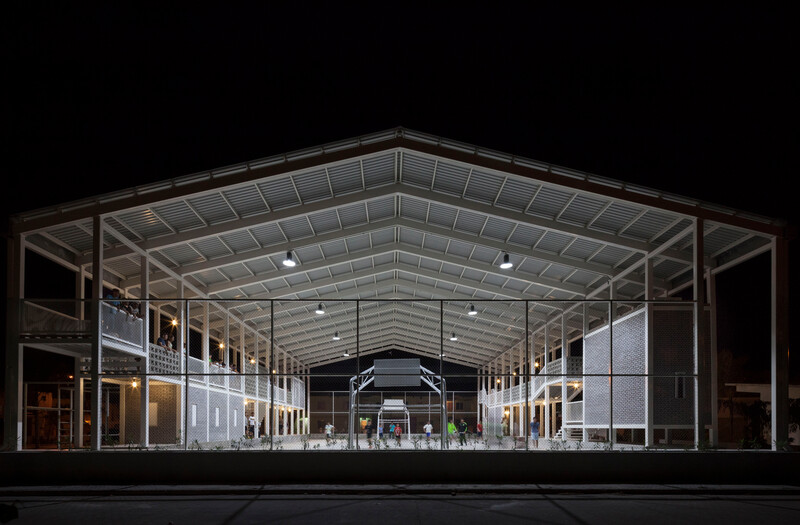 Rozana Montiel started to see the world through designer’s eyes at around the age of 12. Now the founder and director of an interdisciplinary Mexico City architecture studio known for its socially conscious and community-based vision of public space, she was then the young daughter of art collectors. ‘My father was obsessed with Mexican paintings,’ she recalls. ‘Remedios Varo, Diego Rivera. He had a small gallery added to the house. Downstairs was the art, and upstairs was my room.’ Through this high-culture home renovation, Montiel got her first notion of the possibilities of shaping an environment. ‘My parents let me design the room. First I wanted gray and white lines. After I studied architecture, it became like a Japanese room—wood, nothing on the floors, very simple with few elements.’ 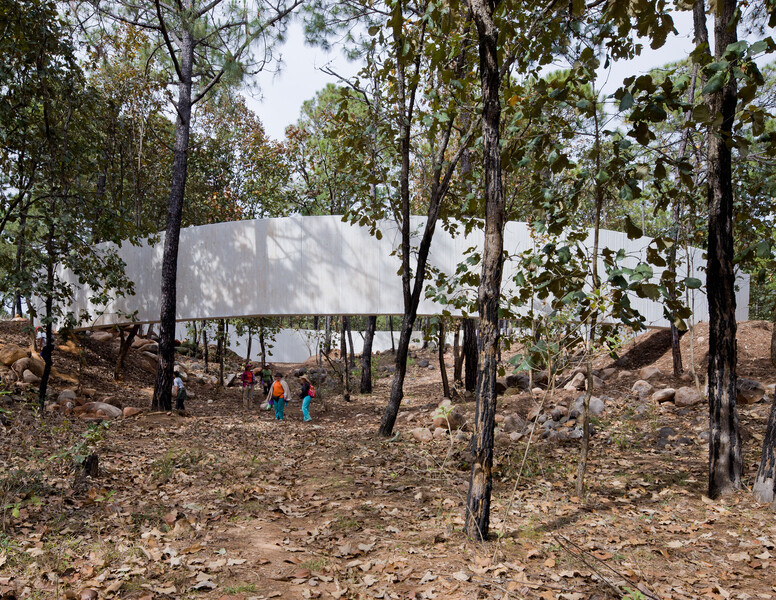 This was in El Pedregal, a district of Mexico City with a noteworthy architectural history. Pioneering Mexican architect Luis Barragán developed the subdivision in the late 1940s with the idea of harmoniously integrating architecture and landscape—in this case, a rocky lava field. Modernists such as Max Cetto, Francisco Artigas, Mathias Goeritz, Pedro Ramírez Vázquez and, of course, Barragán designed private residences on the plots. In photos of some of the properties from that period, other­worldly volcanic rock formations create a stark contrast to the cool, rationalist houses.

‘As kids, so much of our play was creating shelters with what we had around—bicycles, inflatable rafts from the neighborhood pool, and those volcanic rocks,’ she says. In her designs for houses now, she uses such basalt stone where one might expect granite, marble or cast concrete. ‘It’s the materiality. It’s not only about where I grew up, but it’s about our past, these pre-Hispanic sites. A materiality has to be honest. It is what it is. It’s in the way you use it that you re-signify the materiality.’

‘For me, the primary idea of architecture is building relations….When you create place, you build relationships. Relationships activate a space. It’s the people who make the place.’

This idea of re-signification—shifting the associations we have with a material or a space, especially those that seem humble—is at the heart of Montiel’s work. An emblematic example is the Fresnillo Playground, a 2018 project in which she and frequent collaborator Alin V. Wallach transformed a desolate former sewage canal alongside the Manuel M. Ponce housing complex in Zacatecas, Mexico, into a community recreation and gathering place. The elements are simple but strategic: a perforated steel structure serves as a bridge, a shady canopy and a jungle gym; cast concrete blocks provide sculptural elements and stepping stones, turning the sloped sides of the paved canal into a miniature amphitheater. Inspired by children who would slide down the slopes on improvised sleds, Montiel set chutes alongside the blocks. ‘One of my earliest memories is going down slides—toboganes,’ she says. ‘I would always think about ‘Alice in Wonderland,’ and how, when I got to the bottom, it seemed like something had changed: size, scale, playing between fact and fiction. Now in our studio, we work with layers, with scales.’ 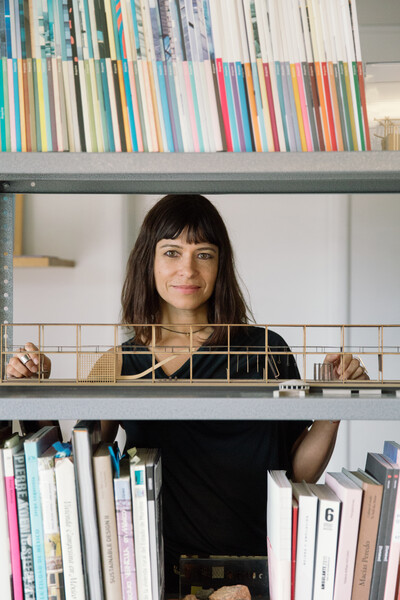 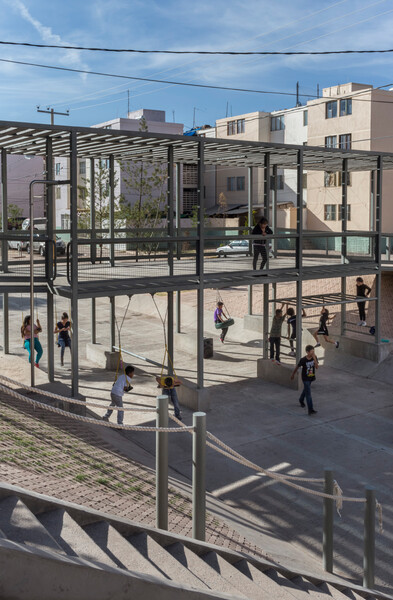 Two other case studies of Montiel’s approach to public space are the ‘Common-unity’ and ‘Court’ projects, both completed in 2016. For ‘Common-unity,’ she removed the fences and barriers that divided an interior block of the San Pablo Xalpa housing complex in Azcapotzalco, a working-class neighborhood of Mexico City. In consultation with local residents, she arranged overlapping platforms, pergolas and pavilions to form a multipurpose common area. For ‘Court,’ in the port city of Veracruz, she designed what she describes as an ‘agora-portico,’ a hanger-like pitched-roof shelter over what had previously been an underused outdoor basketball court at a public housing complex. Weaved into the vast steel space-frame roof structure is a system of small classrooms and balconies, nooks and overlooks. ‘For me, the primary idea of architecture is building relations,’ she says. ‘That’s the idea of place-making, the idea of transforming space into place. When you create place, you build relationships. Relationships activate a space. It’s the people who make the place. There’s this idea from the historian Aaron Betsky that it’s time to create architecture without buildings.’ 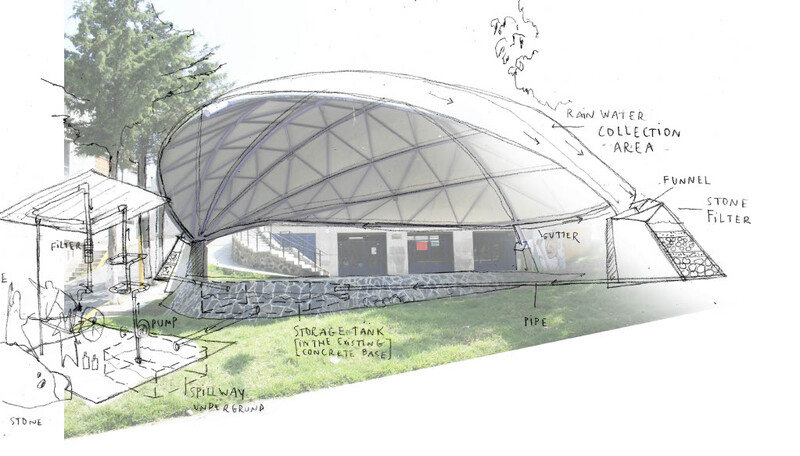 In 2008, Betsky, now dean of the School of Architecture at Taliesin in Arizona and Wisconsin, curated ‘Out There: Architecture Beyond Building,’ at the 11th Venice Architecture Biennale. ‘Architecture is not building,’ he wrote at the time. ‘Buildings are objects, and the act of building leads to such objects, but architecture is something else.…Architecture is a way of representing, shaping, and perhaps even offering critical alternatives to the human-made environment.’ The headquarters of the advertising agency KTBO in Mexico City epitomizes Montiel’s thinking in this vein, in an alternative take on an office environment that involved more subtraction than addition. For the project, completed last January—a rare commercial office in her portfolio—she removed not only hung ceilings and partitions but also the exterior walls on some of the floors, revealing the cast concrete bones of the building and opening up floor plates as naturally ventilated, day-lit terraces.

She also uses juxtaposition as a strategy to transform spaces. Unexpected assemblies of elements create surprising one-plus-one-equals-three gestalt effects of activated negative space. As an architecture of relations, it reads something like an art of assemblage, a practice of collecting. When we speak on the phone between Mexico City and New York, she texts me photos of walls and shelves in her sunny home studio in the Lomas neighborhood of Mexico City to illustrate her point. ‘It’s a little like something from André Malraux’s Imaginary Museum,’ she says. On one shelf, two dozen beetles of astonishing variation, from piquant to sinister, are pinned on rectangular cards. On another shelf, insects, dandelions and dice, all cast in resin and acetate, are aligned with slide rules and other sleek devices. Another shelf displays an array of circles: a postcard of the moon, a sand dollar, a tiny basket, a compass—different, different, different, same, same, same. 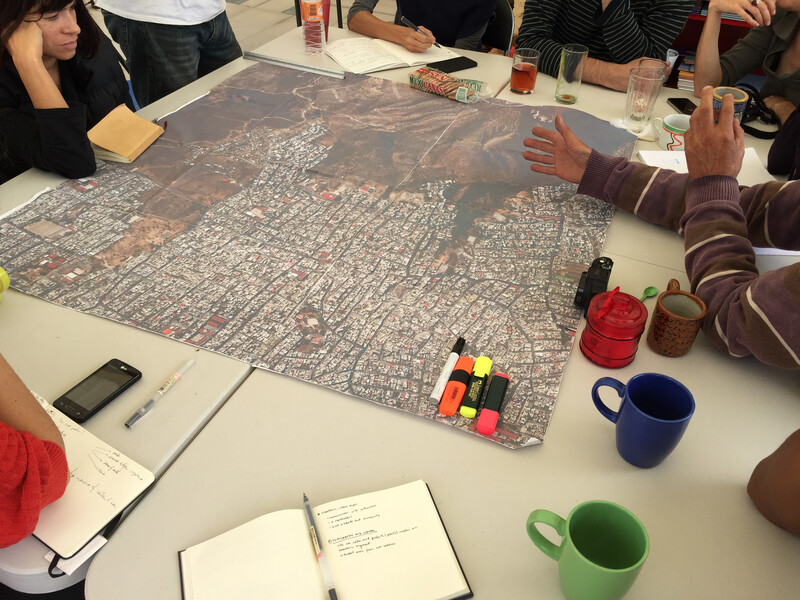 Montiel in a project meeting with collaborators. Photo: Juan Hdz 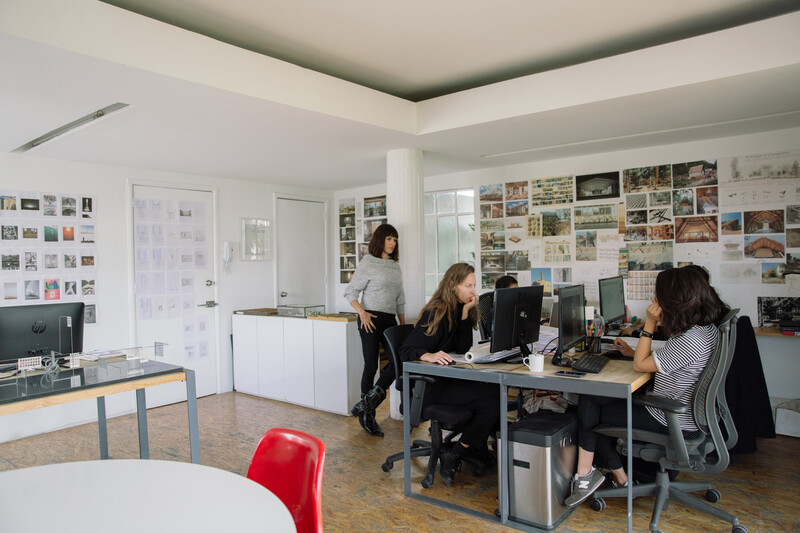 Montiel and staff members at her studio. Photo: Juan Hdz

Montiel’s first major project, built in 2011, was also a circle: ‘Void Temple,’ one of a sequence of modern landmarks placed along the centuries-old 72-mile Ruta del Peregrino Catholic pilgrimage path in Jalisco, Mexico. It’s a finely textured pale concrete wall, 40 meters in diameter—except that it’s not a wall, since as the forest terrain rises and falls, the wall stays level, sometimes embedded in the earth and sometimes bridging above it, creating shade and a sense of place below. ‘[Moving above and below] the horizon line of that circle, you feel contained,’ she says. ‘But you feel open. It’s a way of changing barriers into open boundaries.’

‘Void Temple’ also exemplifies her approach to materials. ‘It’s about using just one thing, one circle,’ she says. ‘The word ‘sustainability’ gets so misused, but there’s a common sense of it, of sustaining different abilities. Very simple forms. Not many materials. Often with very few resources. But my question is always: What can we do with what we have? We try to be congruous with the environment of every project.’ For the Fresnillo Playground, for instance, a dramatic result was achieved with a significant economy of means. ‘The slopes were already there. The light was already there. The steps we added created these beautiful shadows. We are not only playing with the kids, but playing with the light. It’s time to think like that: In a world where resources are dwindling, what is worth designing?’

Actively engaged with the places where her work is made, Montiel set out from the beginning to demonstrate the tangible effect of design on people’s lives. For a 2015 project in Miravalle, Iztapalapa, a Mexico City neighborhood with only weekly access to the metropolitan water supply, she collaborated with community members to construct a low-cost water system. With the addition of filters, they repurposed an existing domed canopy over a small plaza into a rainwater and condensation harvesting device, and they used a re-engineered bicycle as the mechanism to pump water from a collection cistern.

In its simplicity, practicality and humility, the bicycle metamorphosis could function as a metaphor for all of Montiel’s work. It also brings to mind Spanish-Mexican surrealist painter Remedios Varo, whom Montiel had mentioned earlier as part of her parents’ art collection. Like Montiel, Varo liked to reinterpret the meanings we give objects. Her depictions of allegorical landscapes and alchemical interiors often included complex mechanisms with wheels. Varo’s 1955 painting ‘Roulotte,’ for instance, is a fantastical depiction of a cycle rickshaw bearing a church-like structure in which a woman sits at a piano. ‘I loved creating a bicycle machine [like Varo’s] that re-signified something into something else,’ says Montiel. ‘These beautiful machines of hers for building dreams.’