The story behind the cover of Ursula: Issue 4 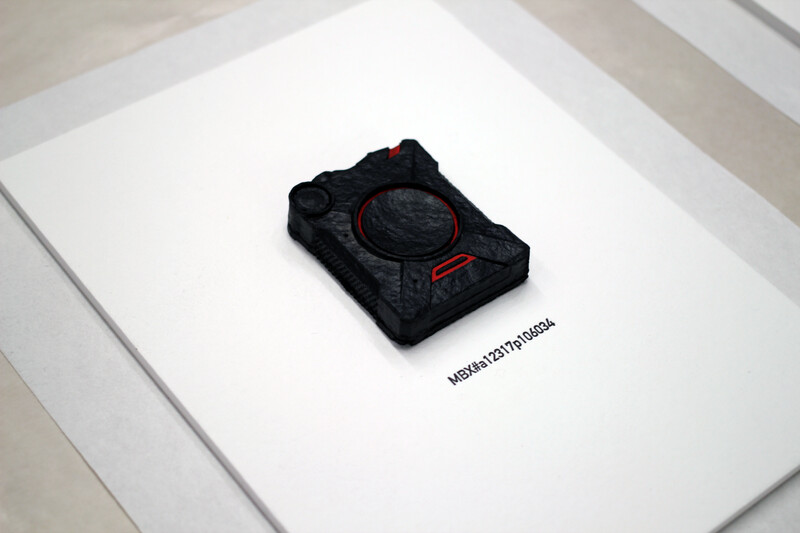 Claes Oldenburg once described the ancient art of the print in easy-to-understand contemporary terms: ‘You could say making a print is like preparing a pizza. You start with a white sheet of paper—that is, the ‘dough’—to which you add layers of images: cheese, mushrooms, sausage bits, tomato paste, immersed in overprinted inks. In the end, the pizza is ‘editioned’—that is, sliced and distributed for consumption.’

The cover of the fall Ursula, the issue marking the magazine’s first full year in the world, features an image of an unsettling sculptural print by Mark Bradford, ‘Life Size’ (2019), a highly accurate depiction of a police body camera, whose increasing use in law enforcement holds the promise of greater transparency but also the dangers of false assurance and deception. The sale of the edition has helped raise more than $1 million for Art For Justice, an initiative started by the philanthropist Agnes Gund to help address the failings of the criminal justice system, particularly its racial biases. 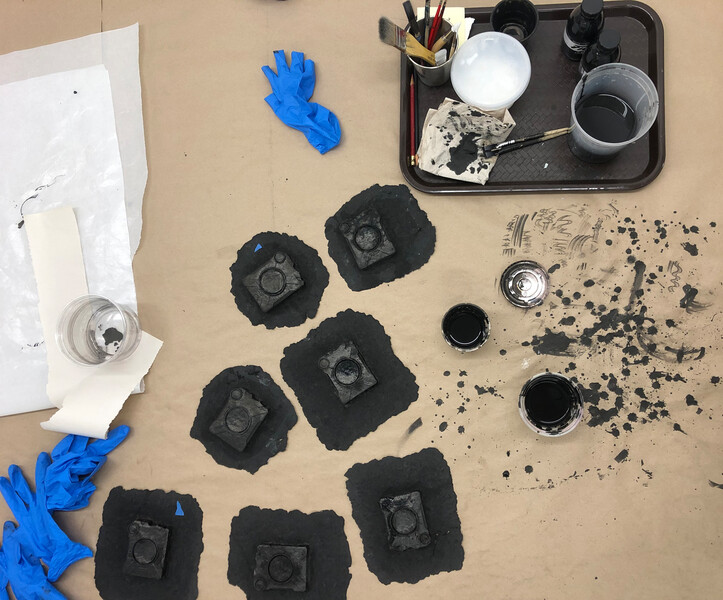 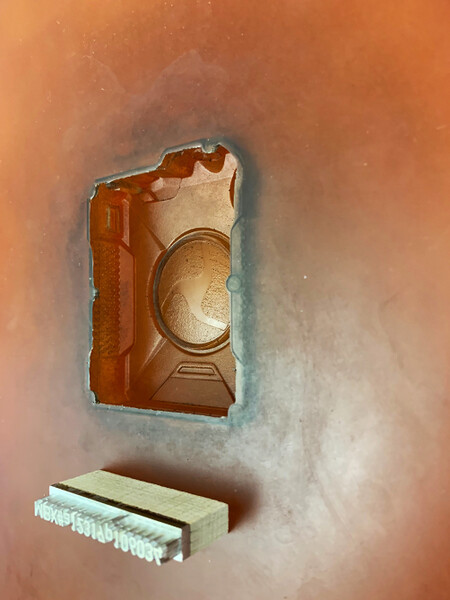 In the world of printmaking—to follow Oldenburg’s analogy—the piece was a monumentally tricky pizza to bake. What follows is a view into how it all came together in a remarkably short period of time in the venerated nonprofit New York workshop Dieu Donné, located in the Brooklyn Navy Yard, as related by John Shorb, executive director of the shop, which specializes in handmade paper editions:

‘It was interesting to think about making this armored object, something that’s designed to be shot at and bashed up against things, made to be indestructible, and yet to make it out of something as delicate as paper.’

‘Mark’s studio contacted us in December of 2018, and we started the conversation ‘Life Size’.  The studio sent us the body camera, a real one, the kind used by the L.A.P.D. People would come in and have no idea what it was. It’s not readily apparent. It has a camera-like quality to it, but it also kind of feels ominous, like maybe it’s a weapon. That’s the beauty of the piece to me, the mystery of it, which adds to its power. We used the body cam to make a mold from rubber. Using a kind of dense paper pulp called casting cotton, pigmented a very dark black, we spent days packing the molds, using tweezers to get the paper fully into all the crevice details. 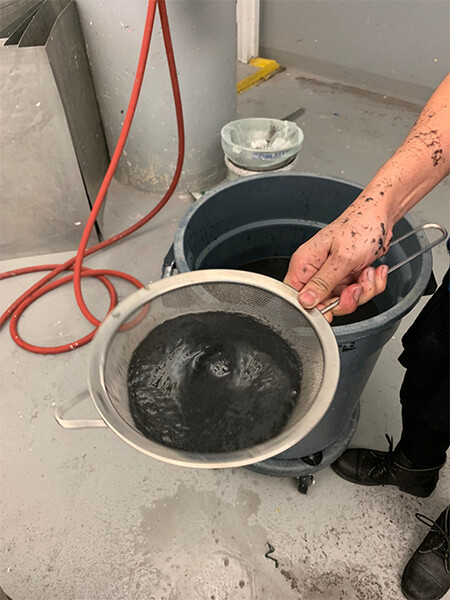 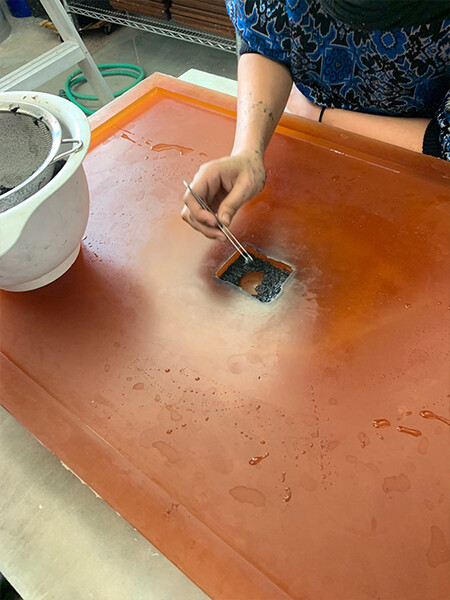 It was a very labor-intensive process, especially when you realize that this is an edition of 45, each piece made to be as identical as possible. We have some photos of all of the pieces, lined up in the shop like these strange, gnomic beings. By the end, everyone was covered in black pulp. We sent Bradford the prototype, and he was playing around with it, and he came up with the idea of it being on a sheet made of a stack of paper, seven or eight sheets glued together. He got the idea from putting the camera object on top of a stack of magazines and he liked the structure and heft and feel of it. We used acrylic ink on top of the black paper pulp, to give the feel of the plastic quality of the camera itself.
We learned a lot from this process because it had variables we’d never really encountered before. I don’t know that we’ve ever made a piece that required a reproduction of a mechanical object in the world that is so precise and specific. It was interesting to think about making this armored object, something that’s designed to be shot at and bashed up against things, made to be indestructible, and yet to make it out of something as delicate as paper. I have to say, too: We’re a nonprofit, and for us to have a chance to have a hand in making a piece like this that would make a real active difference in people’s lives, especially people who have been so marginalized, was really meaningful.’
–
Founded in 1976 by Susan Gosin and Bruce Wineberg, Dieu Donné is a leading non-profit cultural institution dedicated to serving established and emerging artists. Through the collaborative design of contemporary art pieces using hand papermaking processes, artists are encouraged to explore the untapped potential of papermaking as a medium.