Inside her last studio in Vienna, Peter Pakesch of the Maria Lassnig Foundation and Hans Werner Poschauko, former student and close friend of the artist, expand upon Lassnig’s unique life and work to mark the centenary of her birth. Poschauko recalls Lassnig’s advice about experiencing a painting, that you must ‘Look for yourself. Discover it. Feel it.’ This painterly ideology formed what came to be known as her ground-breaking ‘body awareness’ paintings, discussed here by Antonia Hoerschelmann, curator of The Albertina Museum’s exhibition ‘Maria Lassnig. Ways of Being’, and Natalie Lettner, author of ‘Maria Lassnig: Die Biografie’, who sheds light on the personal and art historical nuances that punctuated her seventy-year career.

The film includes never before seen footage of the artist, whose biography and legacy are detailed in the below chronology. From humble beginnings to the avant-garde art worlds of Vienna, Paris and New York, read about Lassnig’s life and evolving body of work, which gave unyielding depth to the self-portrait and broke open boundaries between abstraction and figuration. 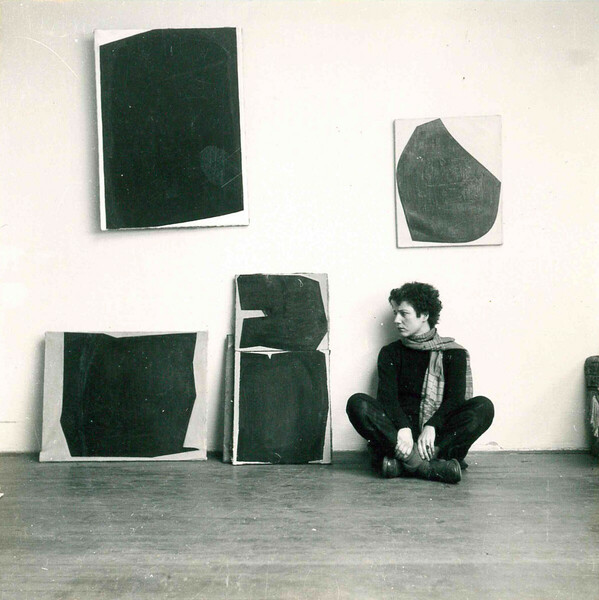 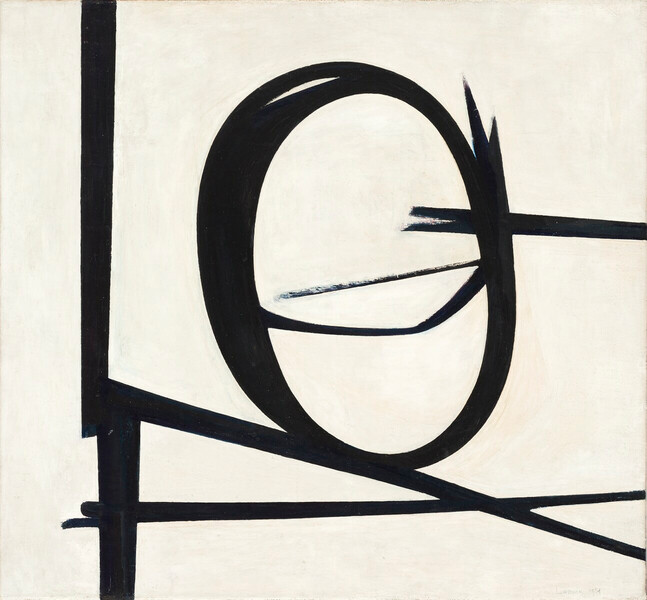 Early life and emergence
Maria Lassnig was born in 1919 in the aftermath of the First World War in Austria. With her mother and new stepfather, the baker Jakob Lassnig, she moved to the state capital of Carinthia, Klagenfurt. Lassnig studied painting at the Academy of Fine Arts from 1940-1945. Her creative developments were marred by the backdrop of the Nazi regime, bombings and restrictions on the operation of culture, which isolated Vienna from the advances in modernism taking place in the US and elsewhere in Europe. Lassnig felt compelled to change painting classes in 1943 because of her idea of ‘vertical, absolute color vision’.

After her graduation in early 1945, Lassnig set up an atelier in Klagenfurt, which served as a social space for artists and intellectuals such as Heimo Kuchling and Michael Guttenbrunner. It was during the late 1940s that Lassnig coined ‘Introspektive Erlebnisse (Introspective Experiences)’. This binary of interior and exterior life, where the brush stroke or pencil allows for the inner life to be made visible, became the heart of her artistic lexicon.

From the late 1940s and into the 1950s, Lassnig’s work moved through many schools of painting, across Surrealism, automatism, Expressionism and Informel. Works from this early period show monochromatic and abstract experiments with the gesture. ‘Statische Meditation I (Static Meditation I)’ exemplifies how she traced a singular line and shape, while the title for another work, ‘Body Housing’, infers her emerging exploration into the boundary between figuration and abstraction. 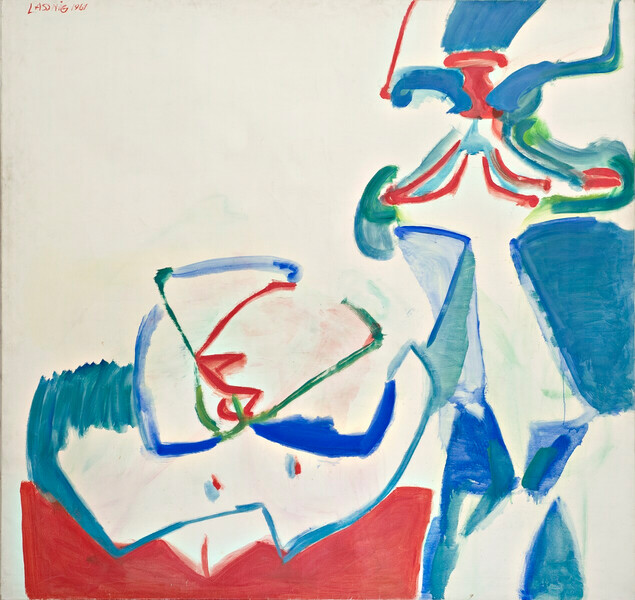 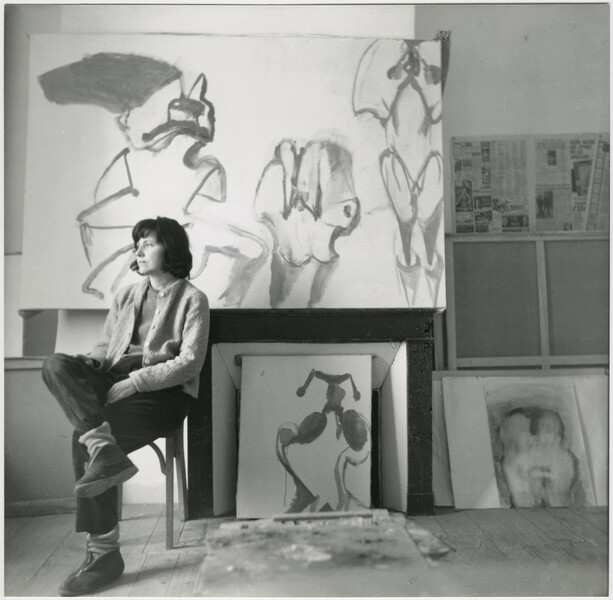 Paris and the line
‘Expansion, enlargement­—this was already an important artistic concept for me in 1961. Shoulders extend outward for two meters, from one corner of the picture to another.’ Paintings from this year, such as ‘Fat Green (Dicke Grüne)’, marked a breakthrough in her approach to representation. This coincided with Lassnig’s move to Paris, where ‘body-awareness’ was born from a new formal freedom. The ‘Strichbilder’ or ‘Line Pictures’ show abstract bodies; backs, shoulders, arms and feet protruding outwards and at obscure angles. The figures are self-portraits or people she meets; they are her ‘dumplings’, not wholly human and neither an abstract shape devoid of the figure.

A selection of narrative paintings appeared during these years, where bodies are placed around the canvas with distorted perspectives and merge into geometric forms. Her influences and companions in Paris were Paul Celan and his wife, who told Lassnig ‘you will survive’. The ’60s were a period of survival in many ways—her mother died and Lassnig endured an existential period of grief, during which she created the melancholic ‘Beweinungsbilder’ or ‘Lamentation Pictures’. Lassnig had a number of significant exhibitions in the later 1960s. Among them were ‘Sentimentale Bilder aus Paris’ at Galerie Würthle in Vienna, and a solo exhibition at Galerie Le Ranelagh in Paris and in Klagenfurt, where her friends the Hildebrands owned a gallery and supported her artwork. 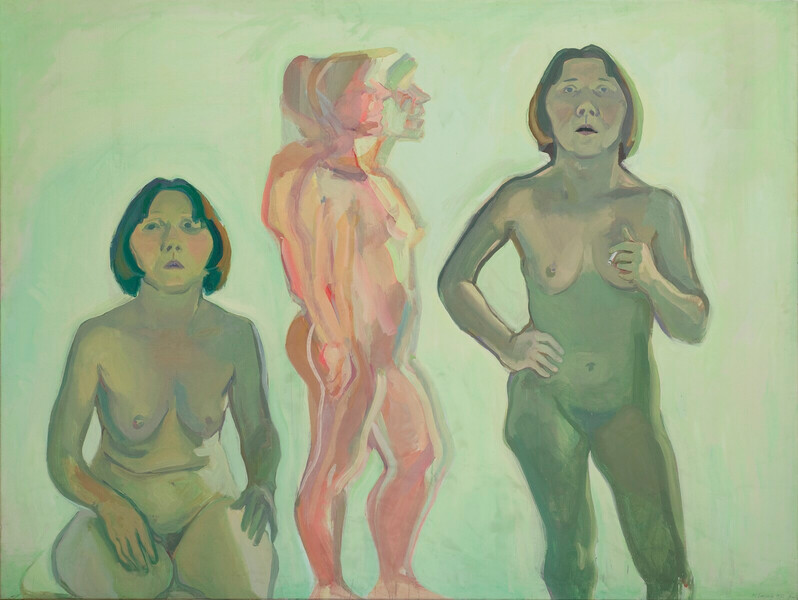 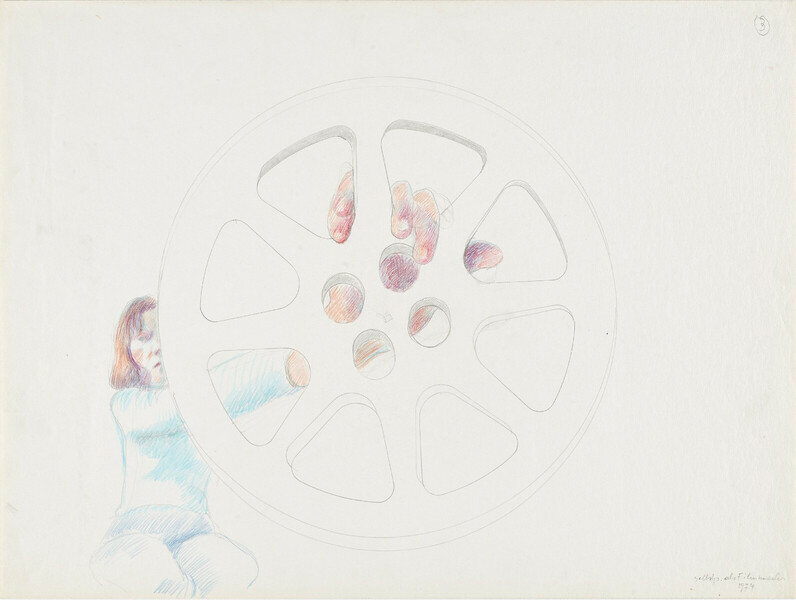 New York
In 1968, Lassnig embarked on a move to New York, spurred on by the advice of Nancy Spero and a disaffection with the Parisian art scene. She held two main studios in the East Village and SoHo, where she painted large scale, realist self-portraits. In 1971, she created ‘Self-portrait with Stick’, in which a partially nude Lassnig is haunted by the delicate trace of her mother in the background, whose hands are ominously placed on her shoulders. The ‘stick’ is positioned diagonally across the canvas, penetrating the artist’s heart.

Out of a lack of recognition for her paintings and new formal experiments, Lassnig ventured into avant-garde film. She took a course at the School of Visual Arts in New York in the spring of 1971 and created a number of animations based on her body awareness drawings. Most incorporated felt tip or sprayed stencils, and others such as ‘Iris’ depicted footage of an up-close nude body, abstracted by the zoom of a camera lens and distortion effects. The camera for Lassnig operated a tentative place in relation to the body—challenging its organic status and throwing subjective experience into a new context. ‘Selfportrait’ is one of the artist’s best-known films, and sees her expand notions of femininity, satire and the self-portrait genre. In it, a cartoonish Lassnig speaks to the viewer from the page: ‘to veil or reveil my face, to reveal my heart, the feeling? Or not to become a Woodhead, a machine, a camera, a respiration machine’. 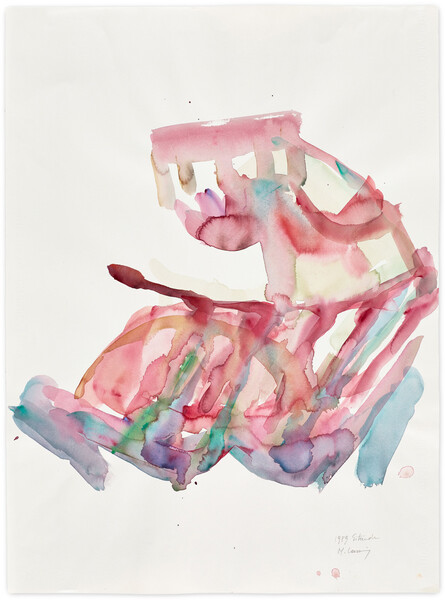 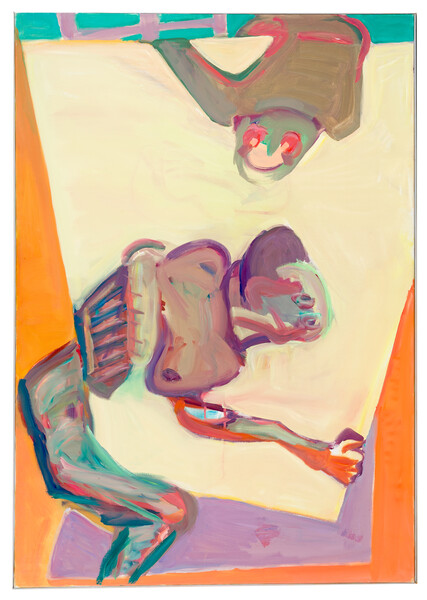 The painter and her canvas
After living in New York, Lassnig moved to Berlin for a year with funding from a German exchange program. A series of watercolors emerged from this period—a medium that she would return to throughout her life. For Lassnig, watercolors enabled an instantaneous connection to paper. These experiments strengthened during travels in the Mediterranean, where she depicted mythological figures and sites. In 2017, a selection of these works were shown in Athens in an exhibition curated by Hans Ulrich Obrist and at the Albertina Museum in Vienna.

In 1982, Lassnig had a travelling solo exhibition of drawings in Germany and participated in documenta 7. Her oeuvre began to evolve away from realism and into abstraction, developing the series ‘Inside and Outside the Canvas’, where figures wrestle with and emerge from canvases—forming what Anna Fricke has termed parodied ‘meta-paintings’. In 1980, Lassnig took up a professorship at the Hochschule für Angewandte Kunst (University of Applied Arts) in Vienna, where she started a teaching studio for experimental animation in 1982. 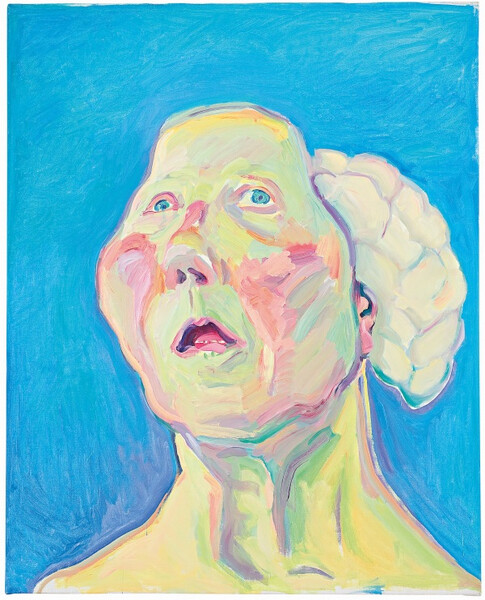 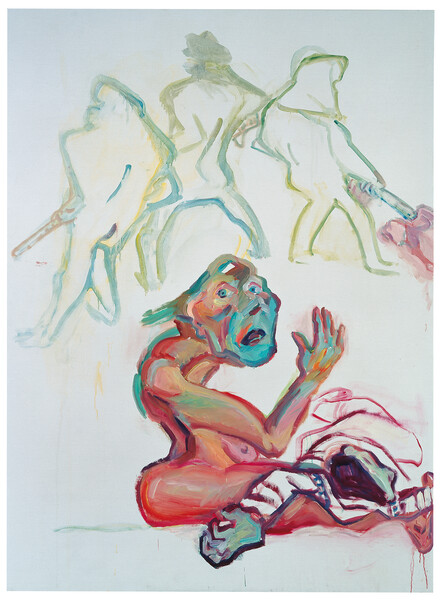 Recognition and legacy
Drawing on her teaching practice and with the help of Hubert Sielecki inside their animation studio, Lassnig looked back at her life in an artist film-meets-ballad made in 1992, ‘Maria Lassnig Kantate’. Her multifarious styles are prescient through the film as she appears in fancy dress and journeys chronologically across stays in Carinthia and the US. During the later ’90s, works emerged that satirize gender expectations and societal conventions, such as ‘The Illusion of Missed Motherhood’ (Illusion von den versäumten Mutterschaft) and ‘The Illusion of Missed Marriages I’ (Illusion von der versäumten Heiraten I).

Though this body of work is distinct in the way it treats the past with retrospect and idiosyncratic commentary, her practice continued to expand into new dialogues with aging and technology in the years that followed. ‘Maria Lassnig. Paintings’ was the artist’s first exhibition at Hauser & Wirth in 2004. It took place in London and showcased large-scale figurative and psychological works that the artist called ‘drastic paintings’. On these canvases, such as ‘Insektenforscher II (Entomologyst II)’, insects and animals take on metaphorical significance and are positioned against the nude and vulnerable human body.

Lassnig was a painter who constantly evolved and remained invariably contemporary. The darker late works such as ‘Die Trauer (Grief)’ and ‘Du oder Ich (You or Me)’ maintain a resonance and ineffability that have infiltrated 21st-century painting and affirm her place among Francis Bacon, Lucian Freud and the emerging feminist avant-garde. If Lassnig is to be characterized by any singular way of being, it is the sincerity and totality of her commitment to painting, as she wrote ‘painting is the meaning of my life. My intellect has developed through painting, my ability to feel and to make judgments. Previously I was nothing, without it I am nothing.’

‘Maria Lassnig. Zarter Mittelpunkt / Delicate Centre’ coincides with the centenary of the artist’s birth, and features a distinct selection of Lassnig’s watercolors, including rarely exhibited works, on view at Hauser & Wirth Zürich from 11 October – 19 December 2019. Concurrently, ‘Maria Lassnig. Ways of Being’ is on view at Albertina Museum in Vienna through 1 December 2019.