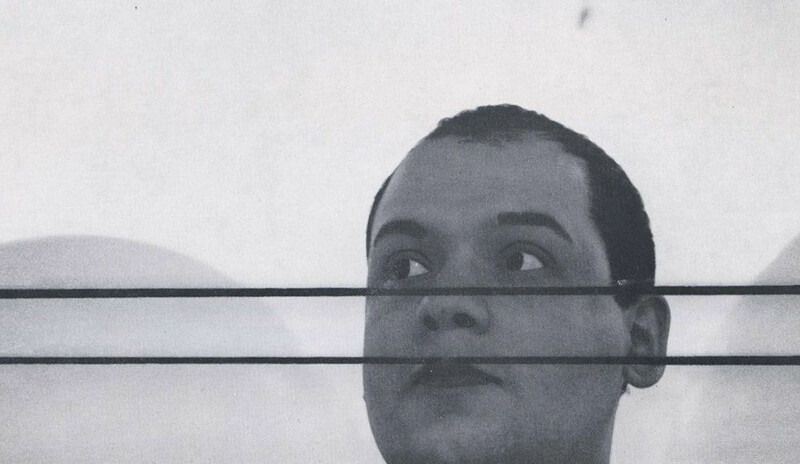 In addition to a rich body of works, Piero Manzoni left a trove of writings which are translated into English for the first time or newly translated in ‘Piero Manzoni: Writings on Art’ from Hauser & Wirth Publishers. The title includes twenty-five texts spanning from 1956 to 1963, the year of the artist’s premature death. Editor Gaspare Luigi Marcone notes, ‘for Manzoni, writing was a means of self-analysis, divulgation, and knowledge; over time writing became art.’

Excerpted below is a seminal text in Manzoni’s artistic development, as well as the most famous and frequently cited. ‘Libera Dimensione’ or ‘Free Dimension’ was written in 1960 and published in the same year in Italian, French, English and Japanese. After writing ‘Free Dimension’, the Italian artist began to produce even ‘freer’ works, finding ‘his dimension.’ Manzoni’s experimentation with materials and forms exponentially grew, spurring a period of utmost productivity for this prodigious artist.

The emergence of new conditions and the appearance of new problems lead, along with the need for new solutions, to new methods and new measures: one does not leave the ground by running or jumping; one needs wings; modifications are not enough: the transformation must be complete.

For this reason I cannot understand those painters who, while claiming to be interested in modern problems, still today consider a painting as if it were a surface to be filled with color and shapes, in accordance with a taste that can be more or less appreciated, more or less learned. They trace a mark, take a step back, observe their work inclining their head and narrowing an eye, then they leap forward again to add another mark, another color from the palette and continue with this frenetic gymnastics until they have filled the picture and covered the canvas: the picture is finished: a surface of unlimited possibilities is now reduced to a kind of recipient into which unnatural colors and artificial significance are forced and compressed. Why not empty this recipient instead? Why not liberate this surface? Why not attempt to discover the limitless significance of a total space, of a pure and absolute light? 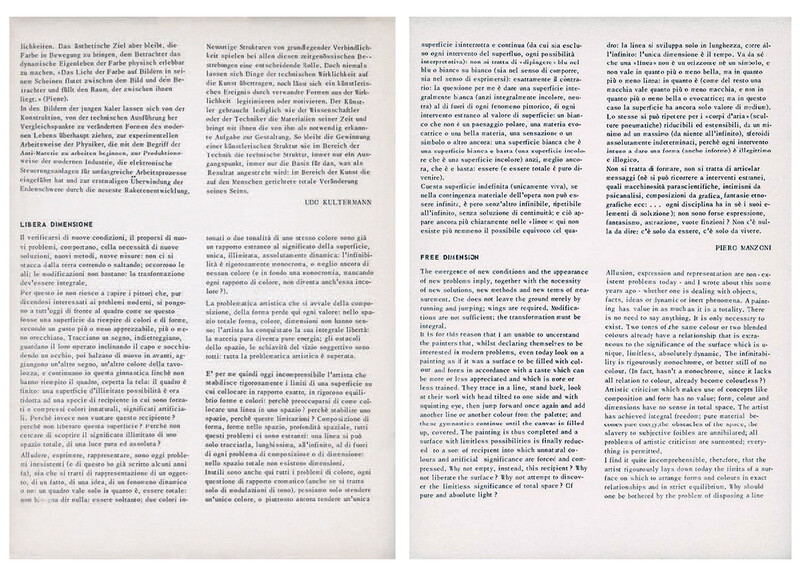 Allusion, expression, and representation are nonexistent problems today (I wrote about this some years ago), whether one is dealing with the representation of an object, a fact, an idea, a dynamic phenomenon, or otherwise: a painting has value only in as much as it is a totality: there is no need to say anything: just be. Two harmonious colors or two tones of the same color already constitute a relationship extraneous to the significance of the surface, unique, limitless, absolutely dynamic: the infinitability is rigorously monochromatic, or better of no color (in the end, in the absence of any relationship of color, does a monochrome not itself become colorless too?).

The artistic problem that draws on composition, on form, loses all value here: in the total space form, color, and dimensions have no sense, the artist has conquered his complete freedom: pure matter becomes pure energy; the obstacles of space, the slaveries of the subjective vice have been overthrown: the whole artistic problem has been overcome.

For me it is therefore incomprehensible today for an artist to rigorously establish the limits of a surface on which to place forms and colors in an exact ratio, in a rigorous equilibrium: why worry about how to place a line within a space? Why delimit a space, why such limitations? All problems such as composition of form, forms in space, and spatial depth are extraneous to us: a line can only be traced without limits of length, to infinity, above and beyond any question of composition or dimension: dimensions do not exist in total space. 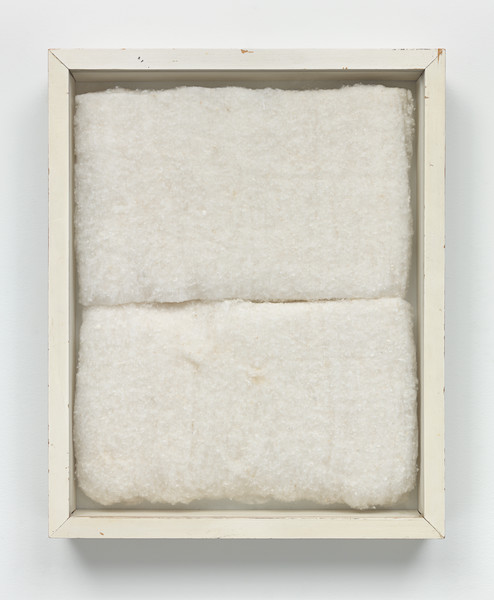 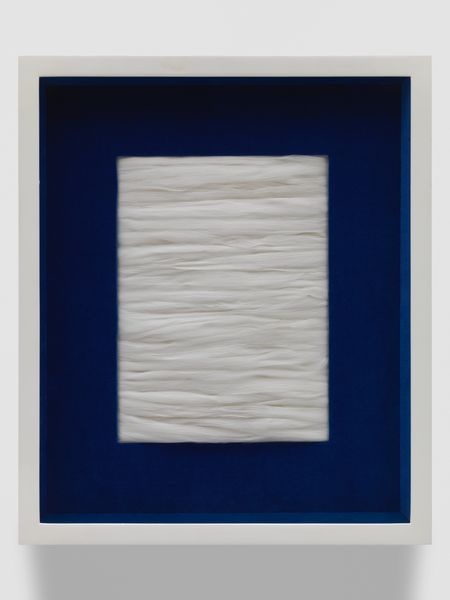 All problems of color are also irrelevant here, all questions of chromatic relations (even if they are only modulations of tone). We can only lay a single color, or rather extend a single, uninterrupted, and continuous surface (from which every superfluous intervention, every interpretative possibility is excluded): it is not a case of ‘painting’ blue on blue or white on white (both in the sense of composition and that of expression), quite the contrary: the issue for me is to provide an integrally white surface (integrally colorless, neutral in fact) completely unrelated to any pictorial phenomenon, to any intervention extraneous to the surface value: a white that is not a polar landscape, an evocative or beautiful material, a sensation or a symbol, or anything else: a white surface that is a white surface and nothing more (a colorless surface that is a colorless surface), better still that just is: to be (and total being is pure becoming).

The same may also be said for the ‘Corpi d’aria (Bodies of Air, or pneumatic sculptures)’, reducible and extendible from a minimum to a maximum (from nothing to the infinite), absolutely indeterminate spheroids as any attempt to give them (an even formless) form is illegitimate and illogical.

It is not a question of forming, not of articulating messages (and nor can one turn to extraneous interventions such as para-scientific complexity, psychoanalytical intimacies, graphic composition, ethnographical fantasies and so on . . . every discipline carries within itself its elements of solution). Are not expression, fantasism, and abstraction empty fictions? There is nothing to be said: there is only to be, there is only to live.