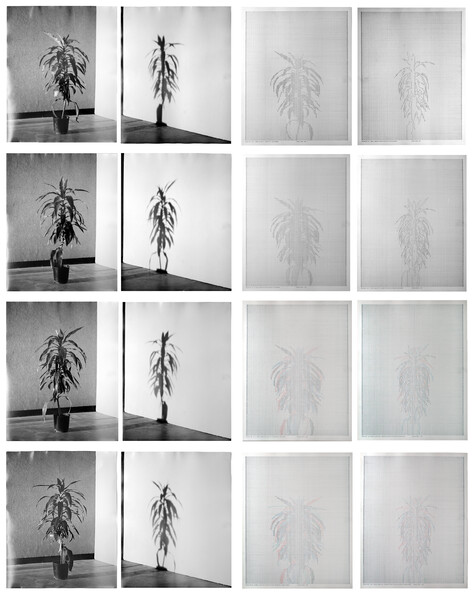 Shadows 1978–1980 uses conceptual and formal strategies that imbue the breadth of Gaines’ work, setting out some of his chief concerns, among them how images, like words, are systems unto themselves—and how both produce truths as well as fictions and illusions, along with the Real and, ultimately, ideology. The notion of ideology may at first suggest higher shared belief systems, such as political movements or religion. But ideology is also intrinsic to the everyday, the banal. It dictates how we conceive of our bodies, the social codes and concepts that we adhere to unconsciously, and the means by which ideas are disseminated and dispersed through visual recognition and through everyday acts, such as speaking.
Shadows consists of groupings of four sets. Each set is arranged sequentially, beginning with a photograph of an ordinary house plant and then a photo of the plant’s shadow. These two photographs are then consecutively transposed onto two numerically plotted grid drawings—one depicting the shape of the plant and the other, the outline of its shadow. To generate a series, each plant is photographed at four positions or rotational turns: 0 degrees, 90 degrees, 180 degrees, and 270 degrees. As each grouping ‘progresses’ the grid drawings include all the prior positions of the plant and its shadow. As a result, the two grid drawings in the fourth set of each grouping present an amalgamation of the shapes and outlines of all the previous rotations.
Easy to overlook amid Gaines’ systematic process are the material conditions and conceptual underpinnings implicit within photography. The inherent nature of a silver gelatin photograph, created by a camera from a film negative, implies potentially endless reproduction. In the case of Shadows, however, each set’s limited edition and rarity, with some sets gone missing or damaged over the decades, suggests instead tenuousness and limitation. My point here is that Shadows does not so much suggest the possibilities of repeated mechanical reproduction as it suggests a disruption of the endless act of signification and production of meaning that we all participate in, often unconsciously.

The etymology of the word image includes the ‘artificial representation of an object, likeness, statue; (optical) counterpart,’ and ‘mental representation,’ as well as the formation of an idea or a mental picture. In mathematics, ‘to image’ is a sequential process in which a point or set is formed by mapping from another point or set. The Latin root word for image is imitari, to copy or imitate.
The process of making a concept legible and part of shared language involves ‘fixing’ the concept and then repeating it in a cultural context. The significance and signification of the shadow, particularly of the artist ‘fixing’ an image via a shadow, dates back to antiquity. In Natural History Book XXXV (circa 77 CE), Pliny the Elder gives us the first written account of an artist ‘picturing’ a subject. (We’ll never know how much of Pliny’s account is factual, but his intent in wanting it preserved is telling nonetheless.) The story concerns a potter, Butades, from Sicyon, living in Corinth. The potter’s daughter, according to Pliny, ‘was in love with a young man; and she, when he was going abroad, drew in outline on the wall the shadow of his face thrown by the lamp.’ Her father then made a clay relief of the profile.

This tracing of shadow speaks not only to the ancient inventions of drawing and painting, leading eventually to photography; it speaks to the formation of mental concepts. To make a shadow permanent, an artist may either trace it or click the shutter. Pliny’s account of the attempt to capture the shadow or ‘stand-in’ for a person (or object)—the idea made material—is the most basic building block for understanding the language of representation: ‘This means that,’ or ‘This stands in for that.’ But suddenly, in Shadows, ‘This means that’ is interrupted by the gap between the two photographs, the space between. The signifier (shadow) is severed from its signified (the plant). Both plant and shadow then have the potential to generate individual meaning, independent of each other.
When I stood staring at Shadows in 2012, this is what arrested me: There, within and between the first two photographs of each set, the production of a sign was interrupted! Barthes describes the ‘punctum’ as an object or area in a photograph that pricks the eye, something that escapes codification, to which the viewer perpetually returns, perhaps even after looking away from the photograph. For me, the punctum in Shadows is precisely this gap, the space between the image of the plant and the image of the plant’s shadow.

As I took in this model of an artist using photography to help viewers see and conceptualize differently, the gap underscored a perpetual question for myself and my work. How can an artist separate her body from limiting cultural signifiers at this particular moment in time and space? In other words, through art, how can I unhinge my person from the dominant ideological language of representation, as well as from many of the social structures into which I was born? How can I disrupt the seemingly natural process by which pictorial and linguistic representation work?
While Gaines’ grid drawings are consecutive transpositions of his photographs, they operate differently from the photos. The photos deconstruct a seemingly natural system of representation by cutting a signifier from its referent. The grid drawings, on the other hand, model multiplicity and remind us that seeing difference depends on one’s position in time and space. Each rotational turn or state of being is both discrete and part of a larger whole. The grid drawings hold an object’s individuality and the multiplicity of its states simultaneously, mapping fluidity in identity.
Grids democratize space. Their inherent structure distributes equal weight to all points in the picture plane, setting up a system by which one can quickly perceive similarities and differences. In contrast to the photographs, the grids do not offer a central focus point produced by camera angle and aperture. As we move from photographs to grid drawings, a meticulous dispersal of the image/idea to a set of coordinates occurs. The grid drawings serve as a reminder that we perceive difference and create meaning in relation to our own rotational turn, dependent upon our particular set of coordinates in time and space.

Although Shadows does not literally address race and identity, it provides us with tools for understanding the structure and the potential fallacies of racial and identity categories. Each plant’s rotational position is most recognizable by differentiation in hue, as well as by its outer edge. The meticulous numerical mapping of color and edges points to our innate ability to perceive ‘edges’ and discern difference. Our categorization of gender and race is a compression of our cognitive tendency to code difference, deeply mapped in the language we speak and the ideologies that govern our perceptions and bodies.
Gaines’ conceptual explorations have emerged from his deep studies in philosophy, mathematics and Tantric Buddhist art, as well as decades of his own art practice. But they also concern his own experience as an African American. In a 2018 roundtable discussion with MFA students in the Department of Art at the Ohio State University, Gaines spoke of growing up in the South, then moving to New Jersey, then continuing to visit family in the South during Jim Crow. This experience of travel, of shifting positions—physically, politically, culturally—between North and South became a primer for understanding the conceptual frameworks of race. The physical signs that demarcated where he could or could not shop or sit or eat or even drink water were the productions of an erroneous, irrational and violent rule-based system that presented itself as entirely given and rational.

Shadows invites us all to ask questions—questions that function as building blocks for creating meaning in art and for thinking critically through our own subjectivity in relation to language and the ideologies that attempt to bind and define our identities. As artists and cultural producers, how do we become conscious critical thinkers? What strategies and structures do we use to create meaning—and cultural and political agency—in today’s fractious, fragile world? With Shadows 1978–1980, Gaines reminds us that we have agency, and with it the power to determine, and to refuse, and to shift, how meaning is made.
–
Charles Gaines’ first exhibition with Hauser & Wirth, ‘Palm Trees and Other Works,’ will be on view at Hauser & Wirth Los Angeles 14 September 2019 – 5 January 2020. This exhibition debuts new works from his signature Gridworks series which employ native trees from Palm Canyon near Palm Springs, a new series of watercolors based on assorted trees, as well as ‘Manifestos 3’ (2018), the latest contribution to a series from which earlier examples reside in the permanent collections of The Museum of Modern Art, New York, and Hammer Museum, Los Angeles.