With Maro Gorky, Matthew Spender, and Saskia and Cosima Spender 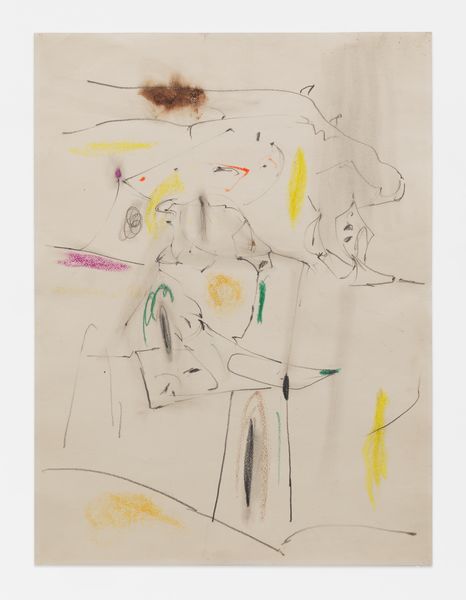 When the Arshile Gorky Estate joined Hauser & Wirth in 2016, there was an immediate synergy between the gallery’s way of thinking and the enormous creative talent within the Gorky / Spender family. Various family members have since become involved with an entire range of gallery projects.

Maro Gorky and Matthew Spender in a Facetime interview with their daughters Saskia and Cosima Spender. 3 PM on a spring Sunday—just after lunch in London and just before a late one in Tuscany. Seeing each other on the computer surrounded by the pixelated contexts of their different lives makes them wish they were all in the same place, sharing a meal and having a real conversation.
Saskia Spender: Do you remember Gorky in Crooked Run?
Maro Gorky: I can’t actually remember my father being there. I was born in 1943 and was only one or two when we used to go with him. I remember going later: Grandpa (my mother’s father) sticking a carrot through the keyhole and saying ‘Fee, Fi, Fo, Fum! I smell the blood of an English-mun!’ when Natasha and I were making a noise and not falling asleep. Our bedroom was off the kitchen. They could hear us children. We loved being there, because Essie [MacGruder, Gorky’s mother-in-law] would make us delicious cinnamon toast. We thought this was a great luxury and very special. That was indoors. Outdoors, I remember the beautiful red, iron-rich earth, and learning to suck nectar out of the honeysuckle ﬂowers. It’s a very special thing to do, pulling the stamen and getting a little gobbet of honeysuckle nectar.
SS: Do you recognize your father’s Virginia drawings from your own memories of being there?
MG: I can certainly recognize the colors of the Virginia landscape from the richness of the crayons, the beauties of the rich Virginian soil and the fabulous ﬂowers that were everywhere. It was very bucolic. Essie and Grandpa had a lovely farm. We adored it. It was really nice.
SS: Was it an inﬂuence on your life? I’m thinking how you have chosen to live in the Tuscan countryside, painting landscapes, your garden and friends, bringing up Cosima and me in Chianti.
MG: I think living in Connecticut when I was about four was even more of an inﬂuence on me. I always preferred the countryside to New York City. We had much more freedom, and little children like running around in ﬁelds and discovering things on their own. It is very difficult to do that in Union Square, in the sandpit with unpleasant children throwing sand in your face, or going to a park all made of cement and dangerous slides.
SS: [laughs] I take it Gorky didn’t share your dim view of cities?
MG: I don’t know how he felt about cities: children are very self-centered. I think he did love the country, because of his own childhood on Lake Van. He was nostalgic for doing things like climbing trees to discover nests. And I must say, when we went to Lake Van to shoot Cosima’s ﬁlm Without Gorky, it was spectacularly colorful. Unbelievable. We weren’t expecting it. The landscape was so glamorous and beautiful. 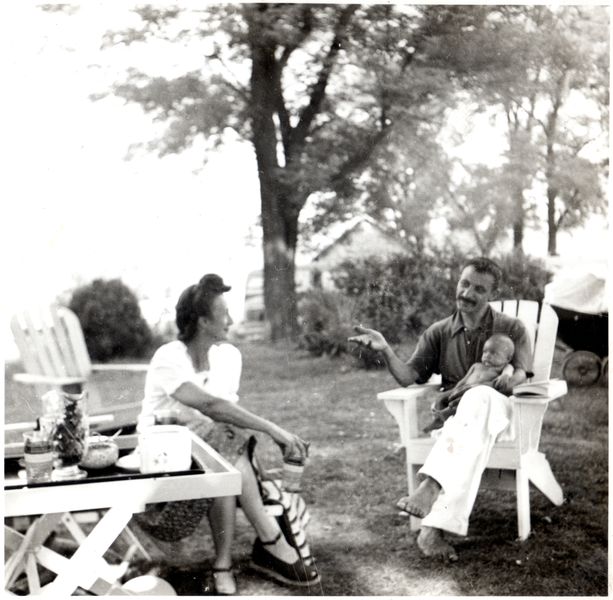 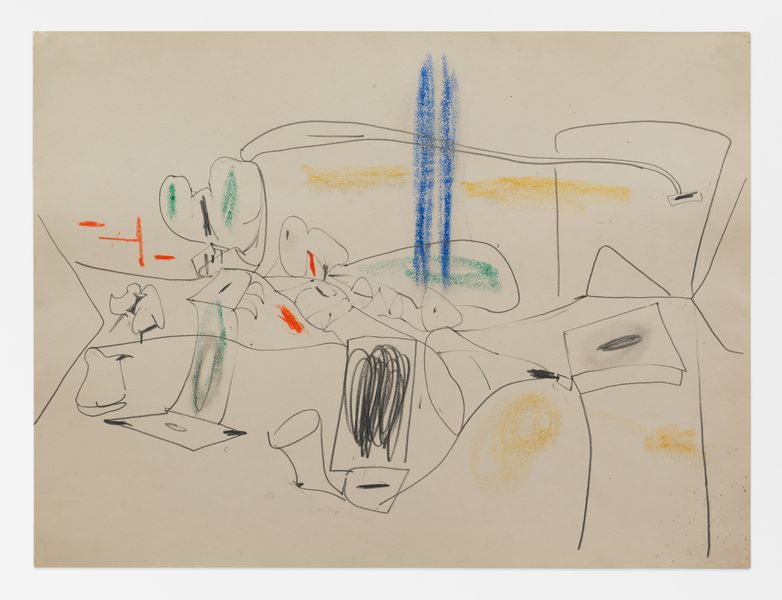 –
SS: Do you remember your father painting?
MG: When we were living in Connecticut, I was allowed to paint on the back of his canvases. Then I would work my way towards the front and try to change what he was doing: then he would throw me out of the studio, ﬂing me onto the grass outside. But he deﬁnitely encouraged me. By the time I was three, I had a lot of equipment, a real little easel and canvas and artist’s paints. However, I didn’t have beautiful artist’s crayons, like Gorky had. I had Crayola. His were special, grand, expensive artist’s ones that came in a special black and white box. I remember he sharpened his pencils with a knife in a rather public fashion, but he also had a very good pencil sharpener that was latched onto his table. We would spend hours making beautiful whirligigs of pencil wood—they’d fall like carnations onto the table. I remember him showing me how to sharpen my pencils. Very important.
SS: Wow. Is this the enchantment of childhood, of being an artist, or Gorky himself?
MG: I hero-worshipped him. I thought he was a magician of some sort. For instance, I was convinced he threw a ball high into the sky over the cement park, and it never came back down! I was always a little scared of balls, and I was simply amazed at how brilliant he was at making a red ball disappear into the blue sky.
SS: The disappearing disappointment! Your father protected you from the ball, by throwing it away upward?
MG: [laughs] Maybe it landed on a branch and stayed there, in a crow’s nest.
SS: When you paint you show many colors in the landscape, just as Gorky does in his drawings. Do you see all those colors when you look at a landscape?
MG: The colors conjure a feeling that is there, in the landscape, maybe in each different tree. It’s not like a photograph that captures what is visible, a good landscape captures the feelings of being there, at that moment. It’s more like a map, the different shapes of the feelings.

‘What artists do, is they look at art from the past, they copy, they learn a shape, and they repeat it. It becomes part of their vocabulary and their language. 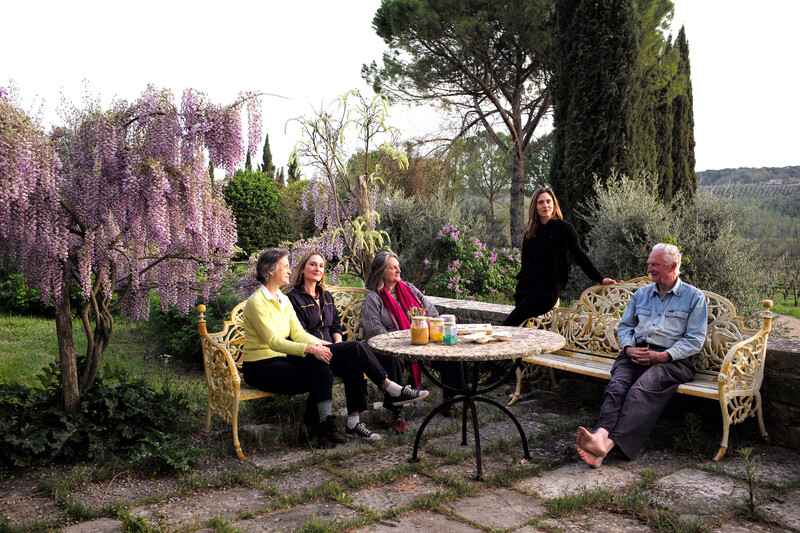 Left to right: Natasha Gorky, Saskia Spender, Maro Gorky, Cosima Spender, and Matthew Spender, at Maro and Matthew’s home in Tuscany. This photograph was taken the day after a visit from Iwan and Manuela. Photo: Lelia Scarfiotti

CS: You have synaesthesia. Do you think he had it too?
MG: I think he did. Lots of artists have synaesthesia. And then don’t forget that he was also into artists like Paolo Uccello, Hieronymus Bosch and others. What artists do, is they look at art from the past, they copy, they learn a shape, and they repeat it. It becomes part of their vocabulary and their language. Right now it’s been discovered that van Gogh was inﬂuenced by Ruskin, when he did that very beautiful painting of a reﬂection of streetlights and a starry night in water. He was in London and working in an art gallery, seeing masses of art, and was a friend of Ruskin. Odd, but true.
CS: And Gorky really inhabited the artists he chose to copy. He drew from their work, and drew an inference into how they felt about their world.
MG: Yes. We know this because we have little details from other artworks that Gorky copied in his sketchbooks. There’s that elbow of a painting by Brueghel—or one of those Dutch artists… Matthew knows better. Where is Matthew?
Matthew Spender: Here.
SS: Tell us a bit about Gorky’s painting process.
MS: The real breakthrough years were 1943–1944, when he did a lot of drawings from nature. I see it as an attempt to rediscover in nature the shapes and ideas that he’d found in Surrealist paintings, above all Matta’s, but also in Tanguy, Miró, and Kandinsky. It’s as if he is looking at nature through their eyes, and he is trying to corroborate what he knows from them, in nature—which is quite an extraordinary approach, when you think Breton was interested in exploring the mind, not nature.
SS: The Surrealists were trying to bring all the other experiences people have into their paintings. Nature is quite a big subject, and possibly includes the mind.
MS: The Surrealists wanted to get away from painting from nature, from what the Impressionists called ‘le motif.’ Matta spoke of ‘inscapes’ rather than ‘landscapes.’
MG: It’s a conﬂation of the imagination and the landscape…
SS: This is a very familiar conversation.
MG: In this house, we have spoken about these things until we’ve gone blue in the face. You know everything there is to know, even better than us. Remember that famous time when you were four years old, and you came out from under the table, and you said ‘Hmmm, Baudelaire, I’ve heard that name before. Was he one of your mother’s lovers?’ Matthew: Oh yes, you must put that story in somewhere.
CS: I think we are going off topic here. Off-piste!
MG: I must say you are both looking very fetching right there in the computer. When are you coming for Easter? When do all your children arrive?
SS: One of them is coming to you tomorrow evening. You’re picking her up from the station at Montevarchi, remember?
–
Works by Arshile Gorky will be included in Hauser & Wirth’s presentation at Art Basel showcasing the very best work from the gallery’s contemporary artists as well as masterpieces of the early 20th century, 13 – 16 June 2019.