A conversation between Mary Whitten, Mirsini Amidon and Michael Plunkett 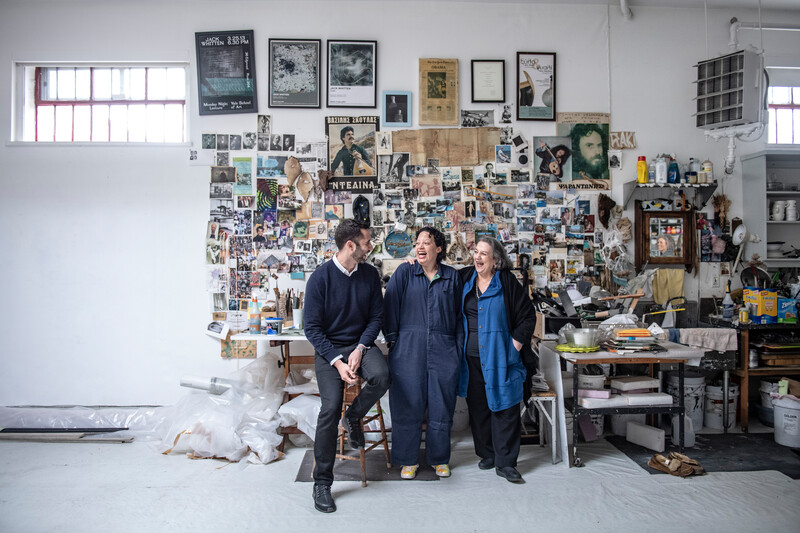 Michael Plunkett, an Associate Director in New York, has worked with the Whitten family since he joined the gallery in 2016; first as an artist liaison to Jack and now as a close advisor to Jack’s widow, Mary and daughter, Mirsini in his role as a member of the sales team.

Michael Plunkett: Jack’s painting ‘Nine Cosmic CDS: For The Firespitter (Jayne Cortez)’ that we will show in Basel—it’s clear in name as a dedication to the poet and artist Jayne Cortez. I understand that the ‘Everybody wants to be famous, but nobody needs it!’ from Cortez’s performance ‘Everybody wants to be somebody’ resonated among the three of you and became a sort of household mantra. It reminds me of Jack’s journal entry in Notes From the Woodshed where he wrote out a list of personal commandments. Number 15 on this list states: ‘Only fools want to be famous (avoid at all costs!)’ Why the intent aversion?
Mary Whitten: You know, we saw it a lot. Jack used to talk about it. As he would say, ‘Galleries would run people up the ﬂagpole and see how they would do.’ And if they don’t do right, there’s no further investment beyond the limited time and money and whatever. But a lot of young artists never recover from this. And we’ve seen this for many, many years.
Mirsini Amidon: Again, and again, and again.
MW: And it’s hard to protect young people.
MP: So then in that sense, fame is dangerous, fame is frivolous, it’s temporary.
MW: It can be.
MA: Don’t believe the hype. It always goes back to that. Don’t believe that when everyone’s saying, ‘Oh, you’re so wonderful!’
MW: Many people with early fame deeply lack the understanding of the essence of themselves and their work. So when that theme of copying other artists or what’s popular at that moment—when that kind of thread runs out—you haven’t got anything. So that deep understanding of the work you have to do, to know who you are, whether you’re writing a book—I mean, a lot of people can write one good book in the beginning.
MP: Right, and they can never see a great novel ever again.
MW: Because they haven’t really done the homework. This hard thinking is necessary. And the self-understanding is necessary. If you want to be great. If you want to be okay. If you want to be good, if you want to do this or that, you can. But we’ve seen a lot of people crash and burn and they don’t come back. I mean it’s a very rough thing out there. Having a long-term thing means really being hard on yourself. 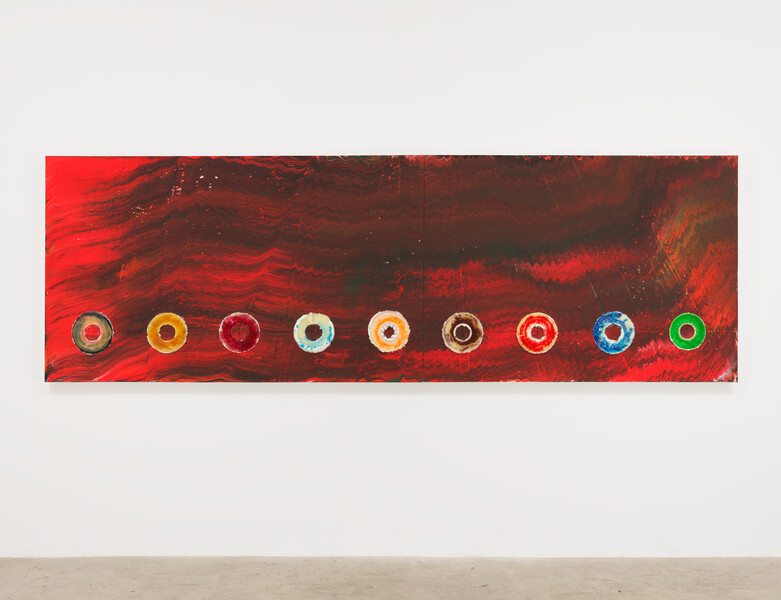 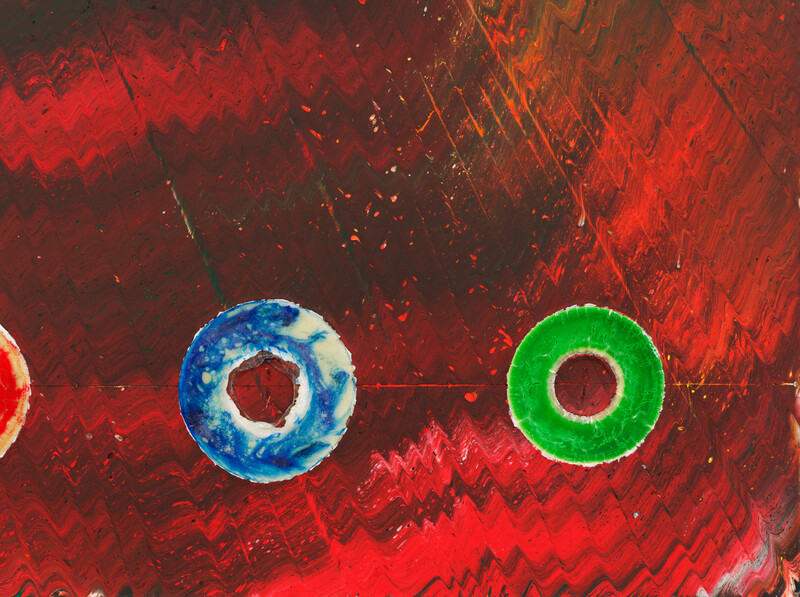 MP: And did he ever talk about his train of thought when conceiving this painting dedicated to Jayne Cortez?
MW: Well, she was a very ﬁery and feisty…
MP: Firespitter?
MW: Yeah, that was the name of her group [The Firespitters].
MW: And her son [Denardo Coleman] was part of it. She was married to Ornette Coleman. You know, she’s edgy and her father was an activist in California. So she came by that very honestly and very directly. She was a real tough cookie. Jack knew it had to be a ﬁery red and he didn’t often paint with red.
MP: Yeah, I haven’t seen many red paintings at all. Then he had this idea of often making paintings as gifts to other people or dedicated to other people. The exhibition here in Berlin at Hamburger Bahnhof, titled ‘Jack’s Jacks’, provides an overview of his career through paintings that he saw as gifts for those acknowledged in the work titles.
MW: It was a hook, you know.
MA: Deﬁnitely a hook.
MW: It’s like in music—the tune—the melody would be a hook to pull you into the music, whether it’s Beethoven or a pop song. There’s a hook. And for Jack, often it was the hook that would get him thinking.
MP: I see, so it would start as this concept of a person and then the painting would create itself from there.

MA: Yes, although that’s not the way it worked with the Prince painting, ‘Quantum Wall (A Gift for Prince)’.
MW: No, for instance the Black Monoliths were really thought ‘I am doing this for ‘so and so.’ And then there would be a lot of thought about how to approach it and what would be the best metaphor in terms of the paint. You know, like that razorblade in ‘Black Monolith, II: Homage to Ralph Ellison The Invisible Man’, all the little artifacts that had ﬁt their way in, they’re all very deeply felt. And I remember Jack was working on one for James Brown. He was doing a piece for James Brown and something was bothering him. There was something that was not working. The painting turned out to be kind of an unusual, weird color for Jack, like a dark brown. And we have seen James Brown in action a few times and he’s very ﬂamboyant and all that. We were on our way, but separately, to our accountant. I’m coming from one place, Jack was coming from another, and he’s on the bus and he sees a black woman who had the chocolate-brown skin of his painting and she was wearing a metallic gold raincoat. He looked at this raincoat and when I met him at Macy’s, he said, ‘You won’t believe it! You won’t believe it! I just saw this woman and she was wearing this raincoat and it solved my painting for me.’
MP: So he sees her metallic bright gold coat and then works that into his painting and that sings it into completion.
MW: That’s how he ﬁnished. Totally. It’s all he could think about, you know, the rest of the evening. He also did weather pictures; I don’t know if you ever saw any of those.
MP: I don’t think I have.
MW: One day he said to me, ‘What’s your favorite temperature?’ This is at breakfast. So Jack says, ‘What’s your favorite temperature,’ you know, out of the blue he would ask esoteric questions. And you didn’t know what wheels were rolling. 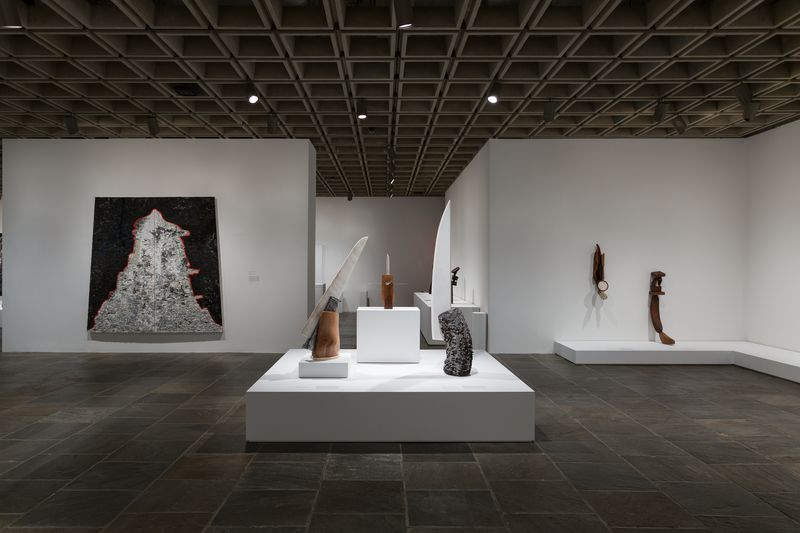 MP: Like, ‘What is the purpose of this question?’
MW: I said, ‘Well, you know, is it like [being] in Greece on a nice, dry day when you’re not sweating, but it’s beautiful?’ He said, ‘Yeah alright, pick that, sure.’ I said, ‘Eighty-two degrees on the dot.’ Later, I asked Winnie, my close friend, and she said the same thing, ‘eighty-two degrees.’
MA: He asked me too.
MP: And what did you say?
MA: Like sixty-ﬁve.
MP: Different than Grecian weather!
MW: But he was recording all of this. Then he asked Jim Barden, who was another one who had sixty something…
MA: Sixty something…
MW: Gloom! But he went ahead and did a small series of paintings about weather and they were personal. 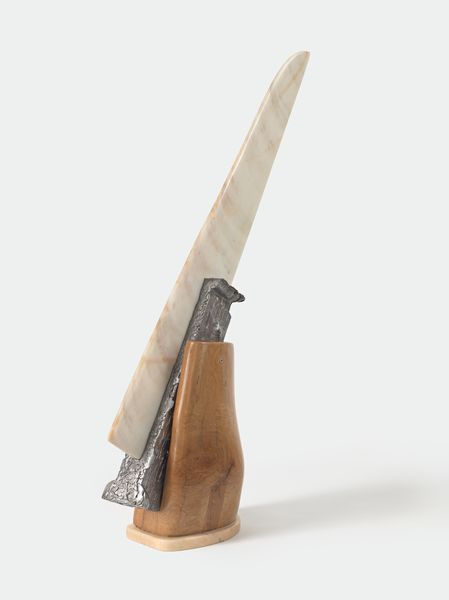 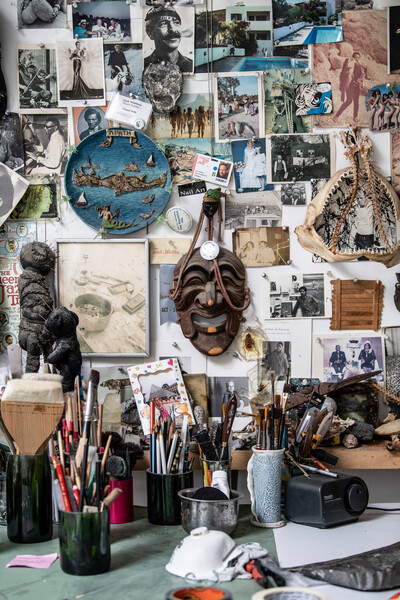 MP: Connected to the people whom he asked.
MW: But often Jack felt compelled after somebody died. He’d been ruminating on it. And I think, you know, he did a Dizzy Gillespie painting and one for Rudolf Nureyev because they had obits in the Times the same day. So he did two paintings, exactly the same size and one is kind of staccato and musical. And the other one is called The Russian Bird. It’s this creamy white with these colors, you know, like lines swirling through. I mean two really beautiful paintings. He hung them on the wall and— Mary & Mirsini: Sold them instantly! [laughter]
MP: Well then, that reminds me, because, I mean, even seeing Ode to Andy in the show at the Hamburger Bahnhof opening—which was also in the Hauser & Wirth London show, when Jack was talking about that painting when we were all in London together—he said he made that after Warhol died and he didn’t especially know Andy, but that’s a big, gorgeous painting.
MW: He knew his importance. I think it was dedicated to the effect that he had out there. He’s in there.
MP: I always wanted to ask you guys this, you have always said that he’s contained in that box. You know, you have the white hair-seeming appearance in there.
MW: Dead-looking skin.
MP: But how did Jack describe that that’s what that was? ‘Oh, I put him in there?
MW: Oh deﬁnitely.

‘So Jack says, ‘what’s your favorite temperature,’ you know, out of the blue he would ask esoteric questions. And you didn’t know what wheels were rolling.’

MP: As simple as that?
MW: Oh yes. People would ask him; he’d ‘He’s in there.’
MP: Right. He’s right there.
MA: I really think that daddy literally meant that the soul was in the actual paint. That’s how I always took it.
MW: You’re correct. Absolutely.
MP: Like when you were talking about the Barbara Jordan painting, ‘Black Monolith III for Barbara Jordan’, when we were in Texas for the MFA Houston exhibition, it deﬁnitely sounded like Jack put his hands into this bucket of acrylic tile, prior to using it, and saying, ‘This is Barbara Jordan.’
MW: He actually had that experience. Somebody was visiting the studio—it was the chairman of the art department at SVA at the time. And you know, they’re talking, she was doing a book about Jackson Pollock, and she wanted to interview Jack and talk to him and he told her, ‘I’m doing this painting for Barbara Jordan. How are you doing?’ And he’s saying, ‘Don’t you get it? She’s in the bucket!’
The conception was in that paint and the preparation of that. And the idea of ‘gifts’…
MA: Well, gifts are different than monoliths because he would give a gift to anybody if he liked them or they helped us.
MP: Right. Whereas a monolith is a full-on dedication.
MA: Dedication to somebody. But you know, if the Fedex guy had really helped out Dad…
MP: He would get a painting?
MA: Yes, or a small drawing.
MW: He had a sense of being grateful for things and it wasn’t just physical health, it was sometimes…
MA: Mental health, like someone who helped a direction of a painting without even realizing it.
MW: Michelle Kuo, who’s now at MoMA, apparently did a very good show. I just read about her recently. And she came over to the house and looked at images and she worked to put Jack on the cover of a magazine.
MP: Of Artforum.
MW: Of Artforum. I saw the back of the wrapper and Jack was teaching that night and I opened it up and I nearly dropped my socks. I mean I was just like, wow, that was so nice! I mean, he met her for lunch one day and had a little painting and gave it to her.
MP: I guess that’s probably also a good way to steer clear of angry thoughts. To just be generous to every single person that gives to you.
MA: Generous, open-hearted, open-spirited. You know?
MP: Yes.
MA: Of course, you protect your heart, but if you’re not giving, how do you reﬁll? You’ve got to be open. Who knows? Like who knows the next person you’re going to meet, or what they might say. And then you go, ‘Oh, that gives me an idea, that helps me.’
MP: And that sticks with you forever.
MA: Forever.
–
Jack Whitten’s ‘Nine Cosmic CDS: For The Firespitter (Jayne Cortez)’ is featured as part of Hauser & Wirth’s presentation at Art Basel, from 13 – 16 June 2019.