A conversation between Michael Neff and Florian Berktold 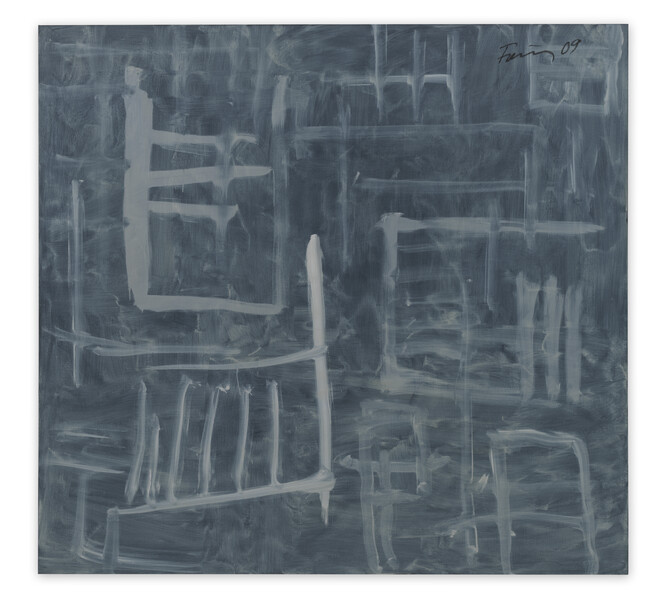 Florian Berktold, an Executive Director based in Zurich, was one of the gallery’s ﬁrst employees and joined over two decades ago. He is a key decision maker within the business and also supports certain artists and estates in their projects and at a strategic level, including Michael Neff at the Estate Günther Förg.

Florian Berktold: Is it true to say that we are looking here at one of the last paintings ever made by Günther Förg?
Michael Neff: Yes, indeed. Günther had a stroke at the end of February 2010 in his studio in Switzerland, after he had ﬁnished a new series of Spot Paintings—more rough and abstract than the ones before—and worked on a new series of gray abstract paintings…
FB: Förg used to work in series, but unlike Richter, those series would not overlap. I remember you describing that Förg would work at one painting only at a time, though. You spent a lot of time with him—what did a normal day in the studio look like?
MN: He had a quiet, organized studio life and working day. He would get up and have breakfast quickly then go to his studio—door-to-door to his small house near the lake at Neuchatel—and start working on paintings he had already ﬁnished in his head. We worked until four or ﬁve in the afternoon, until sunset. This was his usual working day with a break for a simple lunch by the lake. 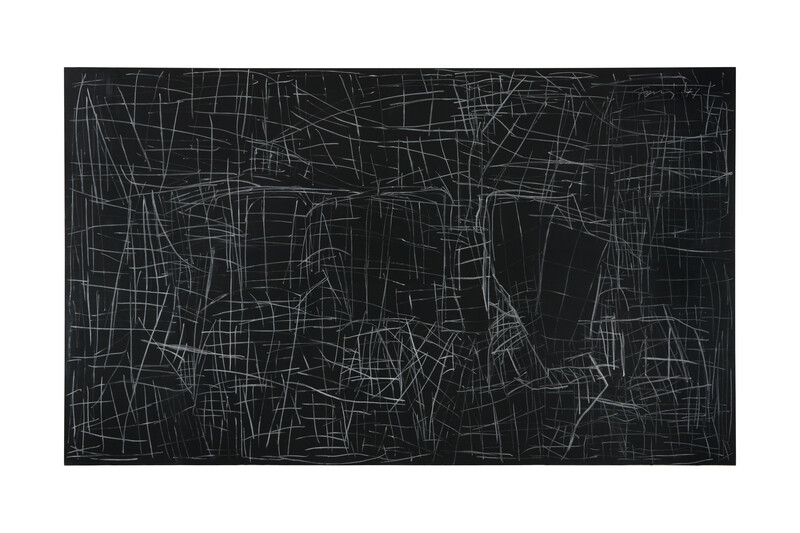 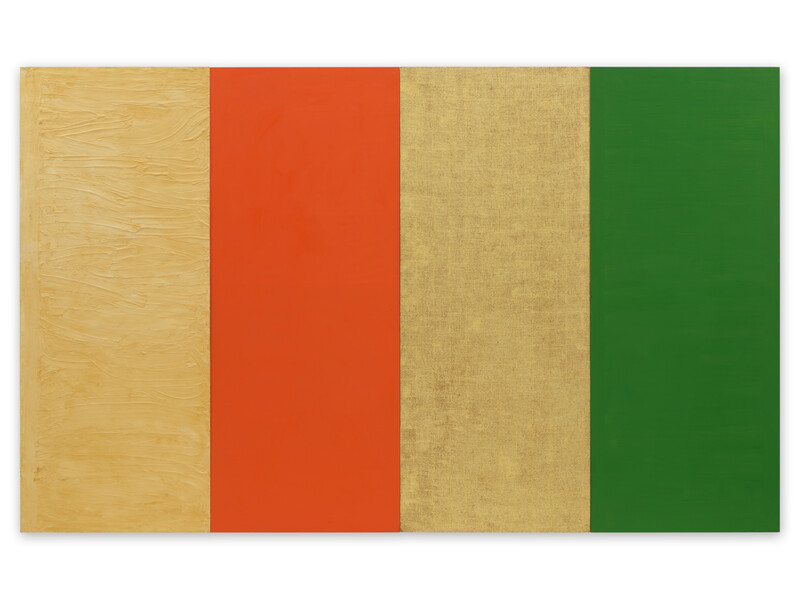 FB: How did one series end—let’s say the Grid Paintings—and how did Förg come about the next series, in this case, then, the Spot Paintings?
MN: The series always ended abruptly (for me). For him it had a planned ﬁnish. There was nothing more to say on the series and in his mind. The next series was always already in his mind but it didn’t come the next day. There was a natural break of some weeks in between each series. But he did not experiment on new works. He started like he ﬁnished the last ones.
FB: A recurring element with Förg was that he would revisit his earlier work. For example, the early gray paintings from the late 1970s reappear 10 years later, also in wall paintings. What is the relevance of those gray paintings?
MN: These gray paintings are a kind of red line through his whole career. Gray was also a refusal of everything: art, colors, nature. It is ultimately a mix of all colors and carries no meaning at the same time. Günther liked the idea of gray in general. He did not work on gray colors—he just took the gray he had in his mind. But he experimented with different materials and the color gray! Lead (of course), canvas, wood panels, paper, these gave him different impressions on gray colors. And every ten years he worked on a new series of gray paintings… 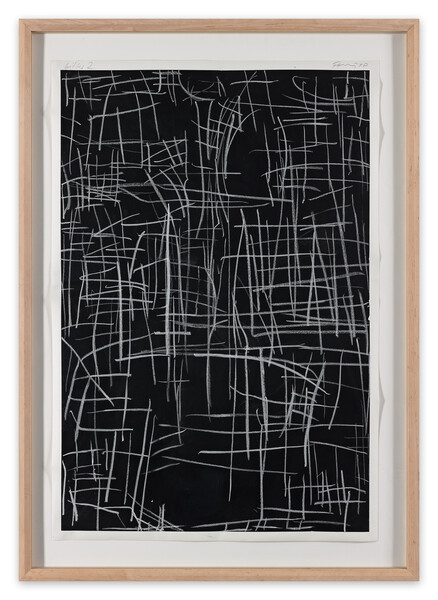 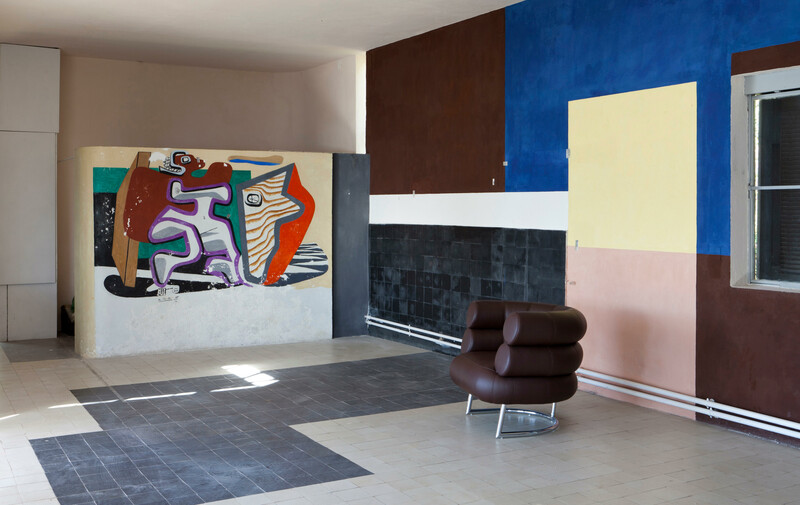 FB: With the late Spot Paintings, Förg arrives at a new level in his practice: poetical work executed with an ease of hand, yet fully mature abstract painting.
MN: He found out that the spots became more and more abstract. He learned that they have a three-dimensional level on each spot. There are not just dots on a canvas. They are planned and precisely worked out on an empty ﬁeld. The bigger the spot paintings, the more perfect the spots were sitting on the painting.
FB: Why do you think he started overpainting this work?
MN: He knew that he would catch himself by copying his own spots and ideas. To overpaint them gave him the basics for new abstraction. He didn’t want to destroy the spots— he never threw away or destroyed works. He did not overpaint a lot of Spot Paintings, only a few. It was a quick settlement on a new series in a comfortable way, and in his preferred color, gray. 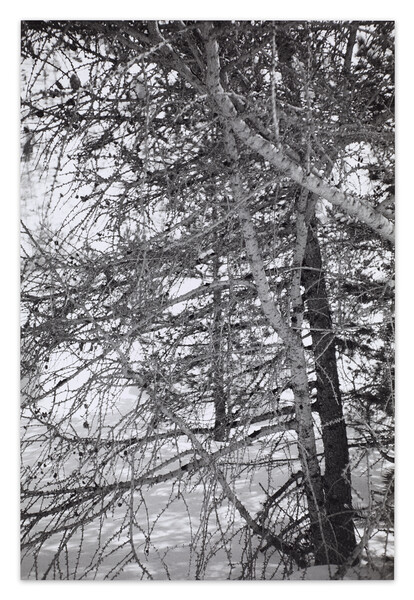 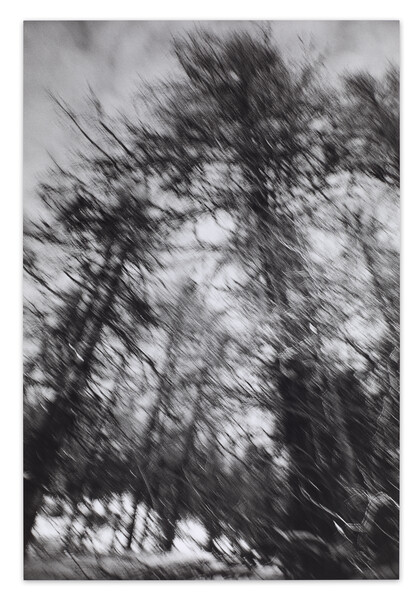 FB: Speaking of gray… Looking at the work Förg did in the 1990s, most prominently the Window Paintings and Grid Paintings, this really impressive and large format seems to defy categories. Yet it is impossible not to recognize ‘Untitled’ (1997) as a Förg work from that period.
MN: This work has a very poetic origin. While Förg was visiting Switzerland’s Engadin, he became fascinated with the winter landscape and started to make black and white photographs of naked trees against the gray sky. Back in the studio, he conveyed this into works on paper, Canson and cardboard ﬁrst, and then made large abstract paintings, also using white acrylic. 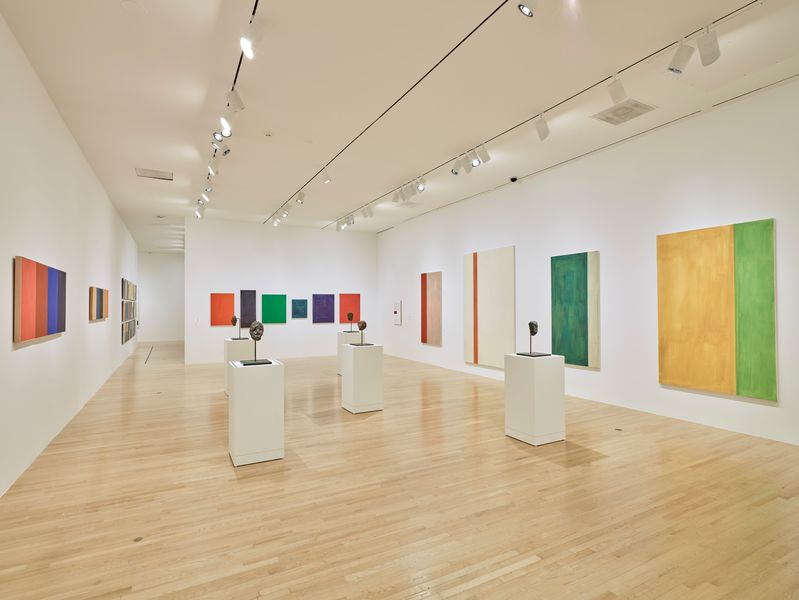 FB: Wall paintings are an important breakthrough of Günther Förg’s early years. He would paint monochrome walls or ceilings and introduce the gallery space into his work. How do the Color Field paintings relate to  that work?
MN: Förg used the Color Field paintings to elaborate and reﬁne his ideas about architecture beyond wall paintings. These paintings are an expansion of maquettes and studies, and he executed them on wood panels, devising every small detail up to the frames used.
FB: What catches the eye, is the seemingly random selection of colors in those series.
MN: The choice and sequence of colors are, of course, acutely conscious decisions, as at this early stage of his career, he had studied artists like Le Corbusier and his color theory beginning in the 1930s, Brice Marden or Ellsworth Kelly.
FB: Would these color ﬁelds then feed back into his continued practice for the wall paintings?
MN: In 1986 – 1987, Förg reached a climax in the wall panel works that go into three dimensions. Paint is not merely applied to the wall, but he uses linen, concrete, and even leaf gold to create experimental ‘color ﬁelds,’ combined in large panels or paravents—like a wall in  front of the wall.
–
As part of Hauser & Wirth’s presentation at Art Basel, a selection of works by Günther Förg are on view from  13 – 16 June 2019.