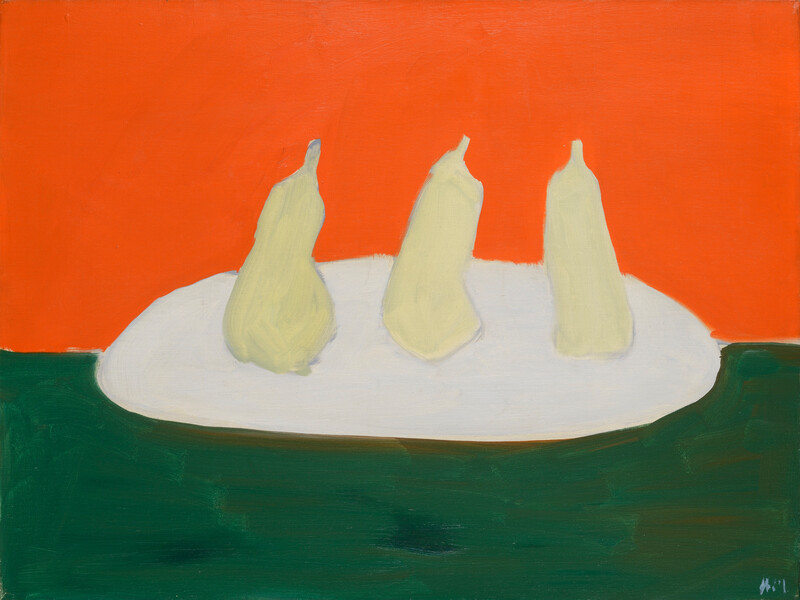 On the eve of his ﬁrst Parisian solo exhibition, Paul Cézanne declared, ‘With an apple I want to astonish Paris.’ With three pears, Nicolas de Staël conquered pure color. Painted in the summer of 1954, ‘Nature morte, poires, fond vert et orange’ is a deceptively simple yet striking still life. At the center of the composition, three pears sit upright on a white, oval plate. Their precarious balance gives the impression that they might roll forward at any moment toward the viewer, creating an illusion of movement within the stillness of the scene. By contrast, the stark background is totally ﬂat and motionless, comprising two horizontally divided and equally large registers of color—a vibrant vermilion orange and a deep racing green—wherein any sense of temporality or spatiality is compressed. With extraordinary economy of means, de Staël achieves a striking visual eﬀect. During the 1940s and 1950s, various forms of Abstraction dominated the artistic landscape in both Europe and the United States. Nicolas de Staël, a French painter of Russian aristocratic origin, was part of the Second School of Paris: a group of French abstract artists rooted in European tradition as well as in Modernism, who explored a lyrical use of colors within a structural frame.
Educated in Belgium, de Staël moved to Paris in 1938, where he received a thorough education in art history. He spent time at the Louvre copying the Old Masters—among them Jean-Baptiste-Siméon Chardin and Eugène Delacroix—while mingling with the modern avant-garde, such as Jean Arp and the Delaunays. In 1943, de Staël embraced Abstraction and produced a thousand works over the subsequent ﬁfteen years. However, he was never truly convinced by non-objectivity. In the last and arguably most accomplished period of his life, de Staël reinforced the subject at the core of his practice, in order to balance abstraction with ﬁguration—here, choosing humble pears.
One might question the signiﬁcance of these three pears, which inevitably recall the great European tradition of Vanitas. In 1953, de Staël had moved to the South of France, struggling with depression, insomnia, and anxiety. On one hand, the ephemerality of the pear could mirror the artist’s state of mind. On the other hand, in the midst of such inner turmoil, it might have been a relief for de Staël to simply focus on mundane fruits. On 16 March 1955, at the age of only 41, de Staël reached an impasse he could not overcome and tragically took his own life. ‘Nature morte, poires, fond vert et orange’ appeals to the bare essentials, opening the path to Minimalism, and reminds us in our ever so busy lives that, ‘less is more.’
–
‘Nature morte, poires, fond vert et orange‘ by Nicolas de Staël is included in Hauser & Wirth’s presentation at Art Basel, from 13 – 16 June 2019.