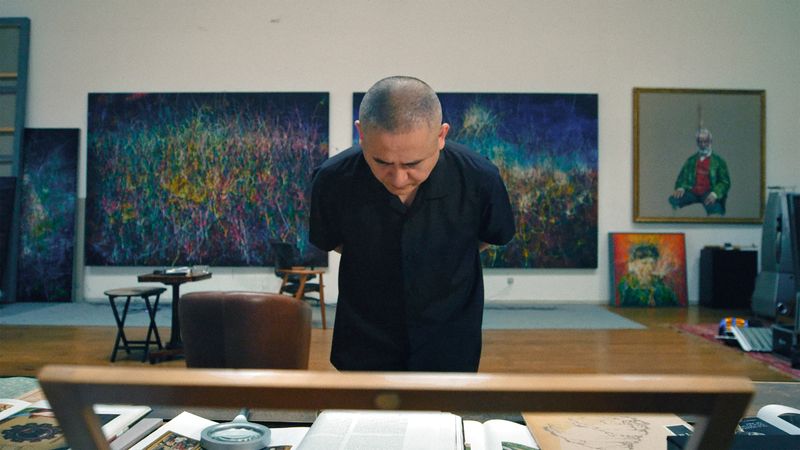 ‘Zeng Fanzhi. In the Studio’ allows viewers the opportunity to gain an unprecedented and in-depth understanding of the bold development of the artist’s creative process as each locale features new works which have not been previously exhibited. In Zurich the exhibition features abstract landscapes from the last two years; in London the focus is portraiture from the late 1980s to the present day; and in Hong Kong new paintings and drawings deftly draw on conjunctions of Oriental and Western artistic traditions reflecting Zeng’s ongoing research and experimentation.
Over the course of three decades, Zeng has continually challenged convention to transcend a simple representation of the physical world. His approach is a highly personal search for a fundamental understanding of painting and its potential as a means of expression through the medium itself. In this respect elements of the artist’s process – such as the painted gesture, the creation of pictorial space and use of colour – are at once a means of conveying human experience and a meditation on the inherently subjective nature of perception. As Zeng Fanzhi explains, ‘Painting provides me with a gateway to stay in contact with the world. What I feel, see, hear, and think are all articulated through my paintings.’ 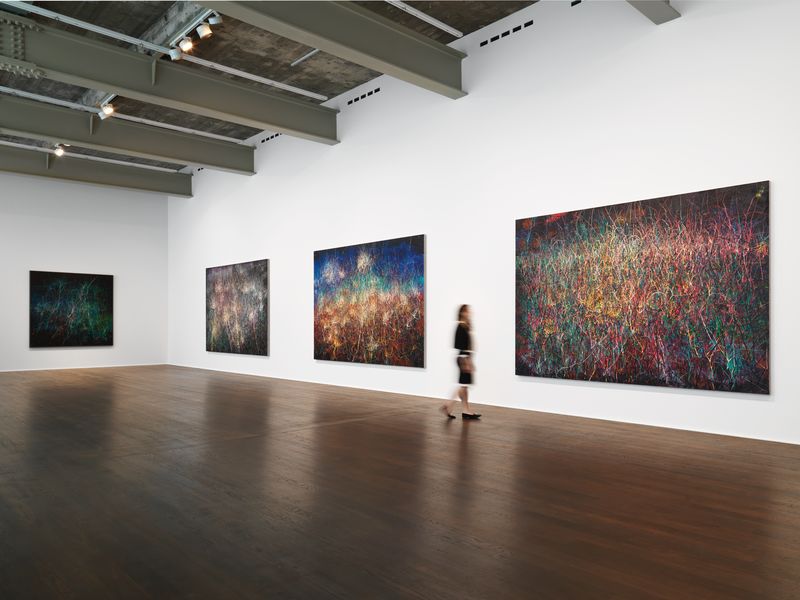 The paintings which feature in the Zurich section of the exhibition are an evolution of a series of abstract landscapes which the artist began in 2002. Zeng has developed new techniques, using diverse brushstrokes in vibrant hues against a darker ground disrupt and traverse the surface plane in intricate expressive skeins. Previously elements such as fire, water and sky appeared in this series, yet the recent works, such as ‘Untitled’ (2017), are resolutely abstract giving an impression of an indeterminate territory reflecting the artist’s expressive plane, the scale of which envelops the viewer.
In this respect, Zeng is pursuing a prevailing line of investigation in Chinese aesthetics in which the forms of the natural landscape are used as a metaphor for the character and emotions of the artist. Zeng has an acute awareness of the dynamics which occur as the viewer continually adjusts the focal distance to arrive at their own ideal vantage point, and the configuration of the works in the gallery space forms a rhythm. 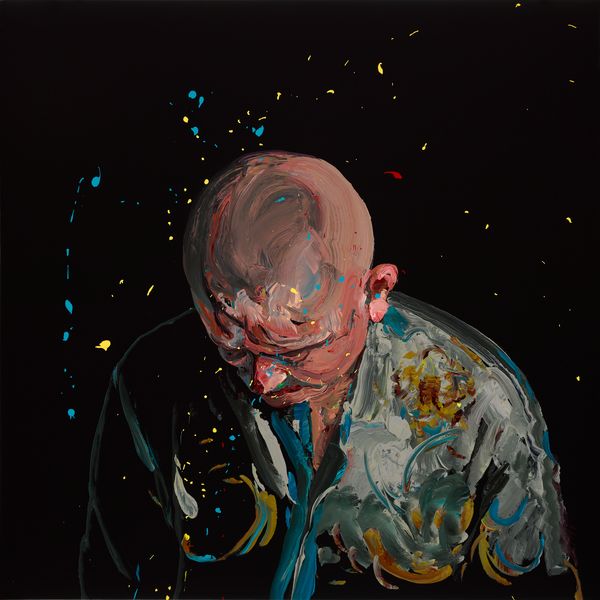 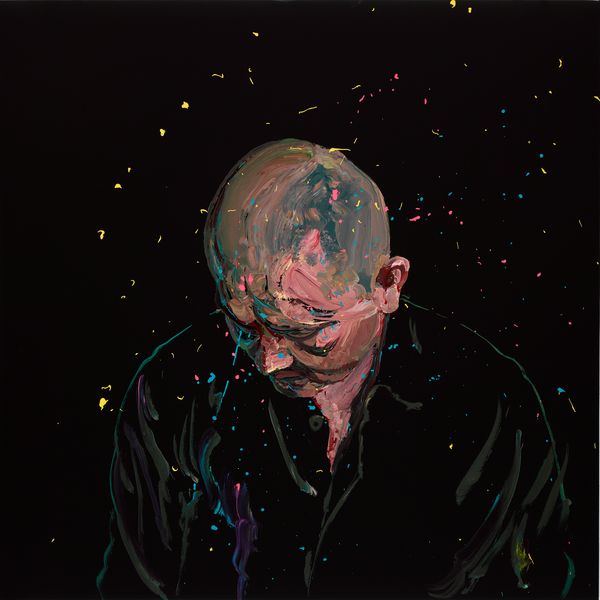 The human figure remains an essential theme throughout the artist’s career and Zeng describes the genre as a means of observing ‘the fundamental emotional state of humankind’. The figurative works on view in London reveal the aesthetic range of the artist as his approach has evolved, from early paintings ‘Smiling Beck-ning’ (1989) and examples from the renowned Mask Series which followed in the 1990s, to several new series of works and portraits featuring the cultural icons Lucian Freud, Francis Bacon and Victor Hugo created in recent years. This presentation aptly demonstrates Zeng’s dedication to experimenting with a multiplicity of approaches over the course of three decades. In this respect it gives unprecedented insights into the artist’s work by revealing how the process of painting itself takes precedence as a means of conveying meaning and experience over the subject matter depicted.
A thematic strand which emerges here is the artist’s reflection on the creative act itself through forms of portraiture. In a new series Zeng returns to self-portraiture for the first time in a decade, portraying himself with a bowed head to suggest the meditative and repetitive nature of the processes which are intrinsic to his creative labour. Regardless of the thematic, pictorial, and stylistic variations, the artist considers portraiture an introspective and autobiographical subject and a means of reflecting on his state of mind, his contemplation of human emotions, imagined ideals, and perhaps even pessimism and compassion about human existence itself.

The presentation in Hong Kong emerges from Zeng’s careful examination of, and reflection upon, the work of Cézanne and Zhao Gan, the 10th century Chinese artist. For Zeng the series of paintings and process of creating them are a means of undertaking acute observations on the methodology and perception of these artists. This experimental approach led the artist to explore the relationship between Zhao Gan’s ‘Early Snow on the River’ (late 10th c.) and Paul Cézanne’s Mont Sainte-Victoire series in several paintings. Further works, pencil drawings on the book covers of ancient drawing manuals, again reference traditional Chinese painting practices and the expressive potential of landscape motifs as a reflection on a state of mind.
Further new paintings in this final section of the exhibition reveal the extent of the artist’s experiments with composition and colour, with the scope of his research expanding to cover comparisons of Oriental and Western practices. The result of this progressive process is that the works featured in this section of the exhibition reflect the artist’s changing colour palette and use of contrasting colours as exemplified by ‘Untitled’ (2018), a resolutely abstract work in which gradations in the hues appear to modulate the surface of the canvas. The study of Cézanne and Zhao Gan is here expanded to incorporate the work of Giorgio Morandi, giving a further insight into the dialogue between abstraction and representation which informs the bodies of work in all three locations.