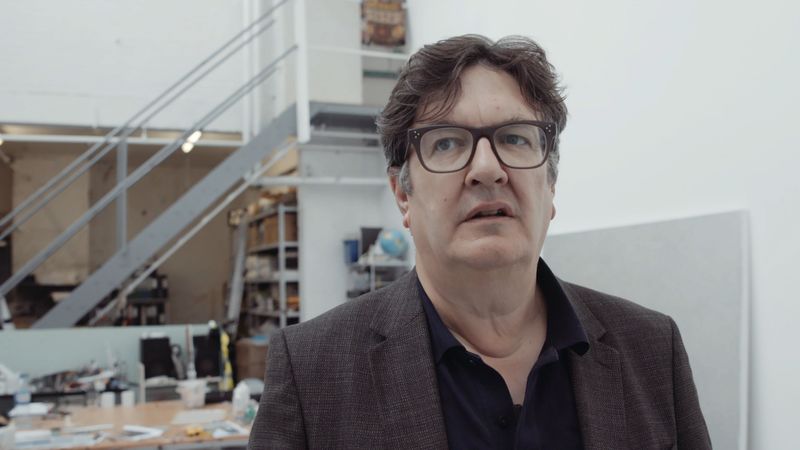 Inside his London studio, Mark Wallinger contemplates our desire for self-reflection and recognition, going public as an artist, and his new Mirror Painting series.

Wallinger’s Mirror Paintings (2018) follow his earlier id Paintings (2015 – 16) and Self-Portrait series (2007 – 2015). The dimensions of these tactile canvases are based on the artist’s own height and arm-span. Through the use of silver paint applied with the artist’s hands in freeform gestures these new works represent a further fetishized encounter with the canvas. The memory of his touch is suspended in the substance of the paintings. Their surfaces are insistently sculptural, tracing his hand and fingerprints, asserting direct and immediate engagement. They also take on an unpredictable illusory quality as the material sets. This transformation infuses the paintings with ‘a quality of otherness,’ a sense of elusiveness that Wallinger likens to gazing through the surface of water.
The theme of reflection is central to Wallinger’s oeuvre; the artist deploys it to probe questions about the psyche and the self, and to challenge our attachment to our identities and the socio-cultural mechanisms that inform them. ‘Study for Self Reflection,’ Mark Wallinger’s first solo exhibition with the gallery in the United States, is on view at Hauser & Wirth New York, 22nd Street from 13 September through 27 Oct 2018.