Inspired by a childhood steeped in African American cultural influences, Rashid Johnson creates layered artworks that engage a conversation between personal biography and its relationship to larger cultural and historical narratives. Johnson works predominantly in mixed media sculptures, paintings, and drawings, combining bare materials such as mirror, wood, and shea butter with loaded iconic objects including record covers, CB radios, historical books, and common domestic objects. Throughout his career, Johnson has explored the ways in which we form our sense of belonging to races and communities, investigating the relationship between familiar objects and identity.

For Lismore, Rashid has made a group of new sculptures employing his minimalist three-dimensional steel black grids, which house a variety of objects including busts painted to resemble shea butter, and act as a living greenhouse as plants in the gardens begin to intertwine with the sculpture over the summer months. Playing with forms taken from the Minimalist tradition – Sol LeWitt’s white open cubes come to mind – Johnson breaks the rational structure open and embeds loaded objects within it, in a sense hijacking or occupying the minimalist trope. 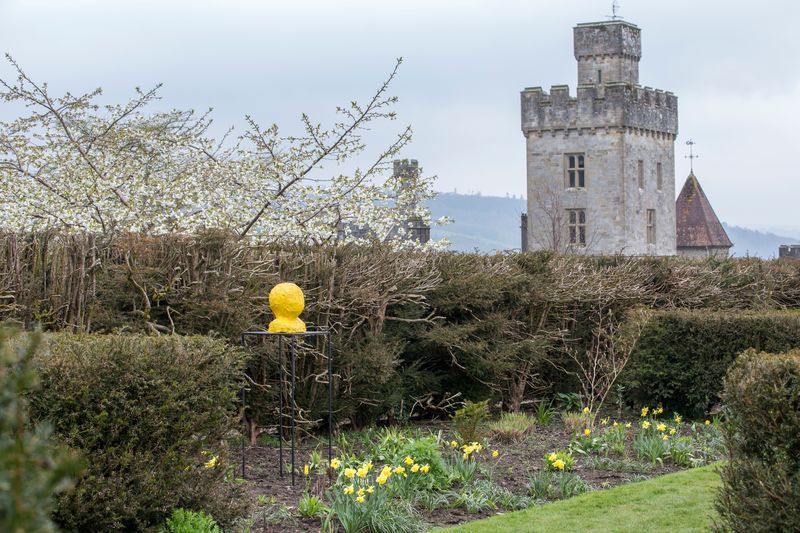 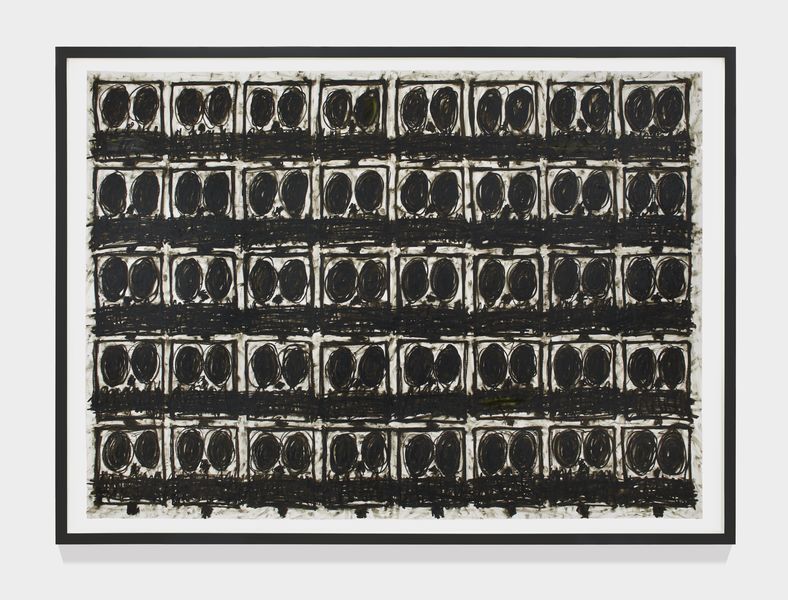 Within the gallery, Rashid responds to the vast gallery space by creating his largest drawings to date, and taking up the bulk of the main space. These new drawings explore the theme of anxiety that runs throughout the artist’s practice. Each drawing presents a grid of rudimentary faces rendered in dark-colored oil-stick on cotton rag. The frenetic motion of Johnson’s hand emphasizes the titular anxiety of the characters depicted, their eyes rapidly drawn spirals, their mouths zig-zagged slashes. Johnson has described this series as a response to the current global social and political climate, and the challenge that people worldwide face in navigating and negotiating their own positions therein.

The exhibition space is book-ended by two film works, shot in 16mm and transferred to digital. Representing the performative aspect of Johnson’s practice, ‘The New Black Yoga’ (2011) is a short film depicting an enigmatic scenario in which five African-American men perform choreographed movements on a deserted beach. Their gestures alternately appear balletic, athletic, and martial, conjuring a range of potential narratives that ultimately remain elusive. ‘Samuel in Space,’ commissioned by Ballroom Marfa, Marfa, Texas, in 2013, continues the trajectory as a singular, totemic black male dancer observes the vast high desert landscape before him and, in a combination of dance and gymnastics, tumbles through the desert at sunrise. In both works, the black male body is a site of reflection on histories past and progression towards rejuvenation and new meaning in the future.

Find a Way to Build Love