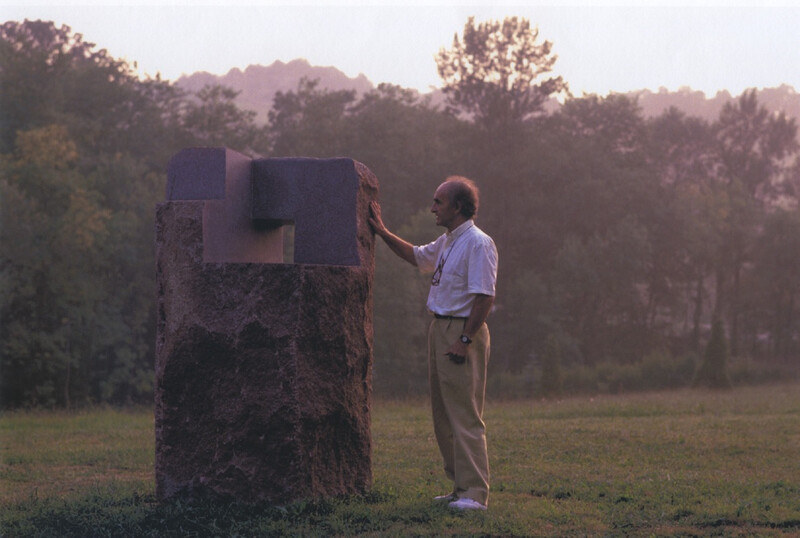 Throughout his career, Chillida drew on his Spanish heritage combined with a fascination for organic form, as well as influences from European and Eastern philosophies, poetry and history, to develop an artistic voice that communicated and resonated with a continent undergoing rapid transformation.

Chillida was born in San Sebasti.n, Spain in 1924. He conducted preliminary studies to enrol in architecture at the University of Madrid before turning his attention to drawing which he studied at C.rculo de Bellas Artes in Madrid. In 1948 Chillida was awarded a scholarship to attend the Cit. Internationale Universitaire and travelled to Paris. On his return to Spain in 1951, he began experimenting in materials that resonated with the Basque region’s industrial heritage such as iron, wood and steel.

Originally a student of architecture, Chillida created art guided by its principles. His formally rigorous constructions in oxidised iron are imbued with tension and poise. Chillida’s contribution towards Spain’s postwar artistic reputation and his personal legacy endure through his work and also through the Foundation which he set up in 2000. In the same year, Chillida opened Chillida Leku, an exhibition space and sculpture park converted from the historic Zabalaga farmhouse in the town of Hernani, near San Sebastián.

Eduardo Chillida died in 2002, aged 78, the artist’s estate has been represented by Hauser & Wirth since 2017. In 2019 Hauser & Wirth supported the reopening of Chillida Leku in order to share the artist’s life and practice with wider audiences, working closely with Chillida’s family and the local community to preserve the artist’s legacy. This will be the first cultural exchange project of its kind with the museum and the gallery in the UK, including a collaborative education and events programme over an extended six-month period. 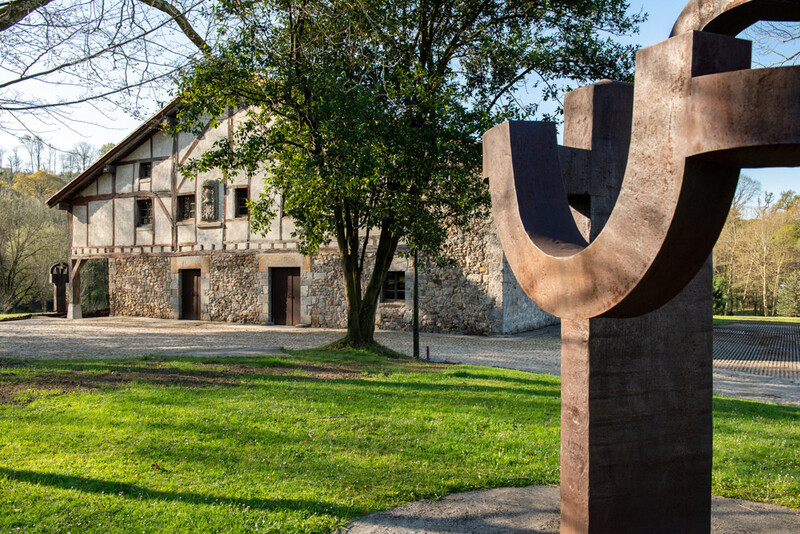 What are the major themes and influences of Chillida’s work?

Throughout his career, Chillida drew on his Spanish heritage combined with a fascination for organic form, as well as influences from European and Eastern philosophies, poetry and history, to develop an artistic voice that communicated and resonated with a continent undergoing rapid transformation. His desire to restore the Zabalaga country house and show his work in dialogue with nature can be seen in real life at Chillida Leku. As a whole, the space constitutes Chillida’s artistic identity, and is home to the world’s largest collection of his work.

Inspired by the Basque Country and its industrial past, Chillida chose to use materials that spoke of this heritage; steel, iron and wood from the region.

In 1943, Chillida began studying architecture, which he later abandoned in favour of drawing at Madrid’s C.rculo de Bellas Artes in 1947. Nevertheless, the artist kept the basic principles of architecture in mind when addressing his artistic work. As such, he called himself an ‘architect of emptiness’, a builder of spaces.

Within his works Chillida avoided the use of right angles, he felt that they limited the dialogue between other angles. He preferred to use gnomons, an angle discovered by the ancient Greeks prior to geometric systematisation. Its origin is the angle that a person forms with their own shadow, right angles are not present in nature; inspired by nature, Chillida applied this to his drawings as well as sculptures.

As a pacifist Chillida was a man that was always striving to find mutual understanding between individuals. For this reason, many of his monumental sculptures are also meeting places and spaces for dialogue. This use of large-scale makes the viewer feel small, giving less importance to the differences between humans, and making an equality part of the whole that is nature. 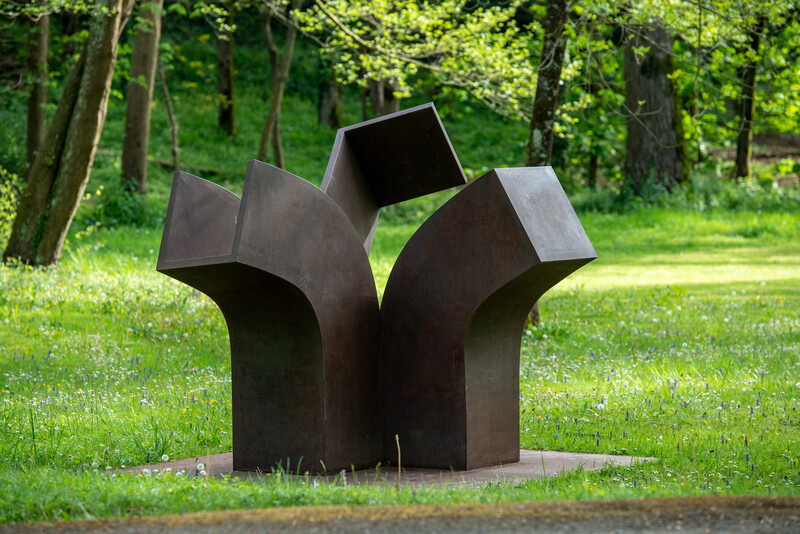 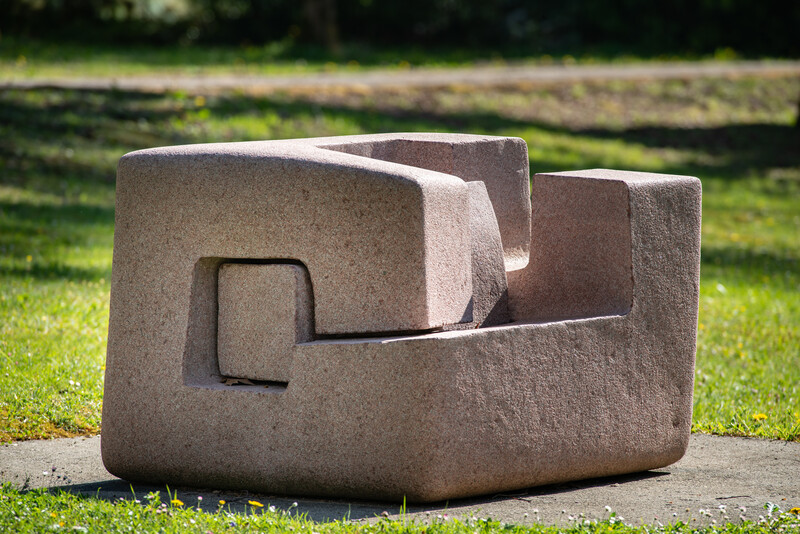 Eduardo Chillida’s main interest is the dialectics between matter and space, the dialogue between what is full and what is empty. The artist considered matter and space as being of the same nature: matter is slow, heavy space, and space is fast, light matter. Space can equate with the spirit, as it is intangible yet can be felt and experienced. On the other hand, materials are something tangible and must always be solid. Chillida thought that, in order for his works to function within this material-space dialectic, what is full must be full and heavy, and what is empty must be purely empty, visible, and accessible space. For him, empty forms were a trick, because they hid inaccessible spaces within.

Chillida’s work is driven by his desire to know and understand the world around him. For this reason, he posed philosophical questions and addressed the same themes that concerned philosophers. He translated his musings about nature, the being of things, time, density, velocity, and space into his sculptures. 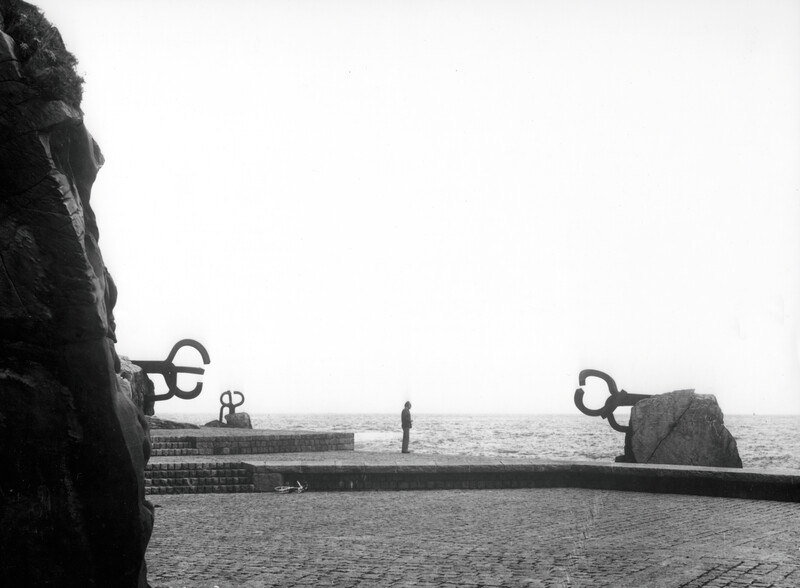 Eduardo Chillida’s sculptures are a materialisation of their location and a conglomeration of the meanings of the specifically selected environment. Many of Chillida’s public sculptures are located in, and interact with nature, showing us the value the artist placed on the environment. For example, ‘Elogio del horizonte (Eulogy to the Horizon)’ and ‘Peine del viento XV (Comb of the Wind XV)’ are found in very special locations from which we can contemplate the sea. Through his sculpture, Chillida defined the place, inviting us to come closer and look beyond.

The influence of music is often present in Eduardo Chillida’s work. Matter and space are essential components of sculpture, much as sound and silence are fundamental aspects of music. Likewise, words like rhythm, time, and vibration apply to both music and Eduardo Chillida’s work. The sculptor approaches the materials through sound, while the titles of many of his works make reference to music. Chillida also created homages to composers, Bach was unquestionably his favourite, with many of Chillida’s works being dedicated to the composer.

Chillida’s early works took the form of drawings and later collage. The artist employed plaster on medium and small-scale sculptures during his time in Paris. Upon his return to Spain in 1951 Chillida began experimenting with larger-scale artworks in iron and wood.

In 1952 Chillida settled in Hernani and set up an iron foundry, learning techniques from a local blacksmith. Later he would employ a type of steel which would oxidise and coat itself with a rough protective layer which would allow them to change due to weathering without becoming vulnerable to decay. These steel structures are often boxed in shape, bending in upon themselves and framing the spaces in between their curved forms.

During this period he continued to make engravings and collages and this core practice was to continue throughout his career, allowing him to explore form and line by cutting into paper. This technique arose from the concept of the collage in the mid 1980s by a new development, Gravitaciones (Gravitations), in which Chillida eliminated the adhesive from his collage, allowing the work to be suspended in space. 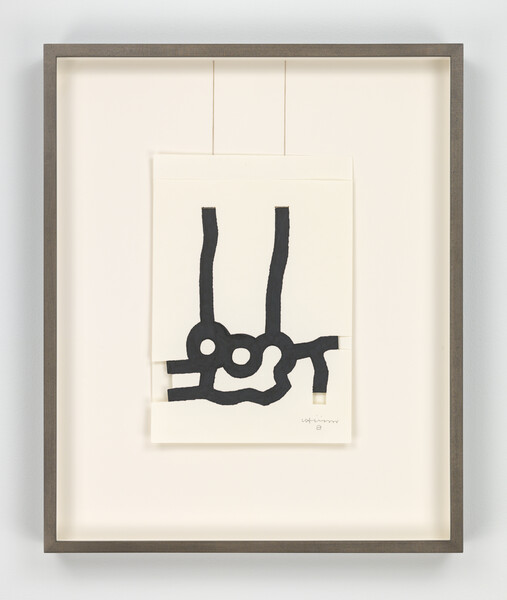 All of the Chillida’s works employ space in relation to matter, his early collages employ blocks of tone to represent both concepts in conversation. These collage experiments later gave rise to the artist’s Gravitaciones, paper works which were sewn together, that when hung upon a wall, gravity would activate and expand them into the surrounding space.

Later in his career Chillida experimented with other materials such as concrete and pink granite mostly on monumental-public works, many of which can be seen in cities across the globe. These large-scale public works often humble the viewer whilst creating a space for dialogue and exchange of ideas.

Many of Chillida’s works incorporate site specific relations to the surrounding natural elements such as ‘Peine del viento XV (Comb of the Wind XV)’, made from three monumental steel sculptures embedded in the rocks of the coastline in San Sebasti.n. Like question marks or outstretched fingers these semi-architectural forms reach out across the horizon before the viewer, allowing the wind to flow between their forms.

Bach
Johanne Sebastian Bach was a German musician and composer of the Baroque period. Chillida dedicated a number of his works to Bach and his many compositions.

Gnomons
Gnomons are angles derived from nature, which have been used by ancient Greeks to tell the time using sunlight and shadows. Gnomons are variable angles that lay between 88. and 93..

Gravitaciones
The name Eduardo Chillida gave to his gravity-activated 3D collages made from paper and
string.

Martin Heidegger
Heidegger was a German philosopher who Chillida had an ongoing dialogue with throughout the 1960s. The two men shared a philosophy of spaces and places presiding over objects aesthetically. Heidegger wrote that sculpture was ultimately ‘the embodiment of places’.

Pacifist
A pacifist is a person who believes that war and violence are unjustifiable.

Public Work
Public works are artworks which are visible and accessible to the general public, usually situated within the public realm, commissioned and paid for by local governing bodies.

Make your own 3D collage from paper and string, hang them on the wall and see how they occupy the space around them.