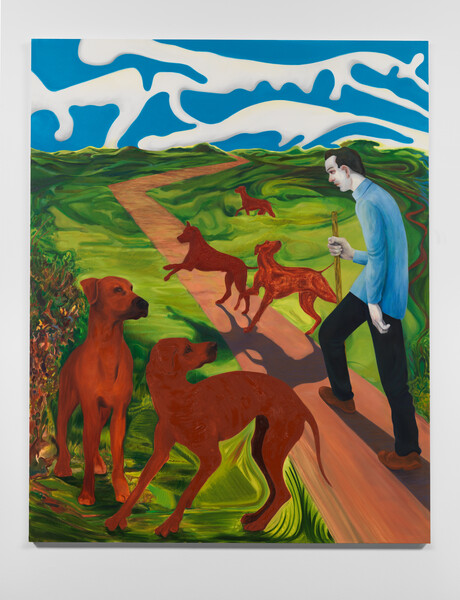 Teachers’ Notes:
Nicole Eisenman
‘Where I Was, It Shall Be’

This resource has been produced to accompany the exhibition ‘Where I Was, It Shall Be’ at Hauser & Wirth Somerset from 3 October 2020 – 10 January 2021

Born in 1965 in Verdun, France, Eisenman has defined herself as one of the foremost painters of her generation by developing a powerful figurative language that combines elements both factual and fictive, mainstream and countercultural. After graduating with a BA in Fine Arts from the Rhode Island School of Design in 1987, Eisenman moved to Manhattan’s Lower East Side where she emerged as a central figure in the resurgence of painting in America, and a singular voice for identity and culture at the margins. She currently lives and works in Brooklyn, New York.

Having established herself as a central figure in American painting throughout the 90s, Eisenman has since expanded her practice into the third dimension with international acclaim in recent years. This exhibition presents the fluid transition and interchangeable approach Eisenman takes to sculptural 2D image making, painting and larger-scale installations. For this exhibition, she will present an edition of ‘Sketch for a Fountain’ previously on view within the Skulptur Projekte Münster, Germany in 2017 the work is called ‘Fountain’ and can be seen in the farmyard. This traditional ensemble of subdued bronze nude figures suggests multiple narratives and its placement in the farmyard of Hauser & Wirth Somerset emphasises Eisenman’s recreation of idyllic serenity. In the Rhoades Gallery there is a maquette of a domestic sized replica of ‘Procession’ unveiled during the Whitney Biennial in 2019, and the sculpture Goblin (2020) is shown in the Bourgeois Gallery. 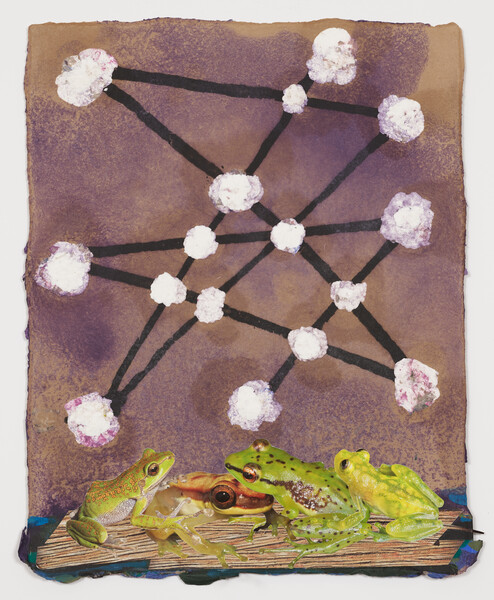 Eisenman is primarly known for her figurative painting that enfolds the legacies of artists across the art historical canon to the present, from Breugel the Elder to Titian, to the Surrealists, to Philip Guston, to Leon Golub, and Amy Sillman. She depicts layered and surreal narratives, often based on real characters from her own life.

This exhibition features a series of paper pulp drawings created over the past three years at the Brooklyn-based non-profit Dieu Donné workshop. Inspired by the visual language of imagery found in popular culture – movie posters, advertisements, and internet memes – the works on view combine humour and wit, sharply juxtaposing image and text. Instantly recognisable and graphically striking, Eisenman has described these works as posters. Created in collaboration with master papermakers while a resident at Dieu Donné’s Lab Grant program, the series combines elements of drawing, painting and sculpture. Each work has been painted with pigmented linen pulp directly into a cotton substrate during the papermaking process. The work is then pressed and dried to reveal an image that is inseparable from its medium. The works are arresting in colour and form, with figures physically constructed in 3D alongside cartoon abstractions and text. Seemingly playful on the surface, Eisenman reveals worlds of nuanced thought and feeling on contemporary life.

What are the main themes in Nicole Eisenman’s work?

Eisenman’s oeuvre is distinctive in its emphasis upon the allegorical and its witty, skilful mingling of autobiographical elements with historical and fictional narratives that draw attention to contemporary socio-political conflicts. Her art has attracted critical admiration for its skilful, subversive appropriation of compositional and stylistic elements of the great painterly traditions, including Old Master and Italian Renaissance art, to interrogate the corruption of contemporary life by politics, technology, and consumerism. Unable to locate her own experience and point of view in the art historical canon, she takes pleasure in complicating its hierarchies, altering the course of accepted narratives with outré colours, varied styles, and mismatched metaphors. 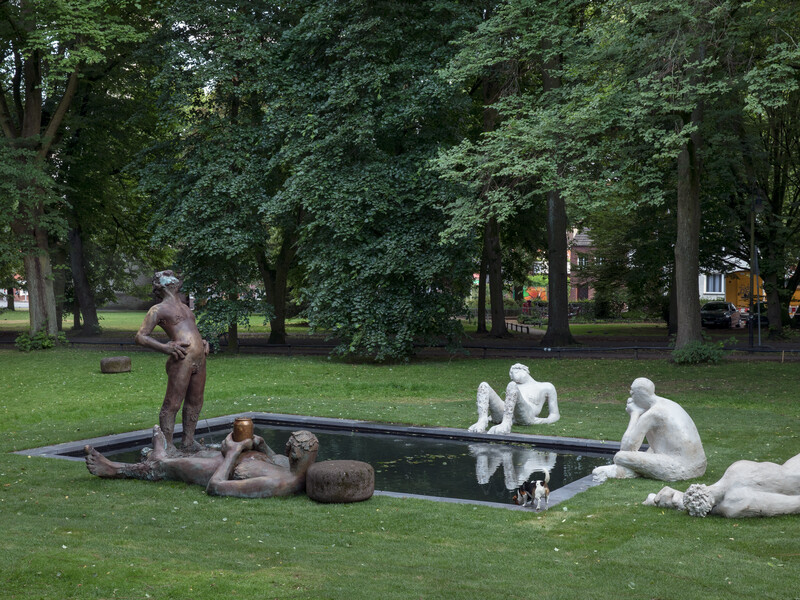 In the artwork ‘Where I Was, It Shall Be’ the artist depicts a solitary walker travelling down a zigzag path accompanied by Rhodesian ridgeback dogs who are blocking the path. The male figure is a projection of Eisenman and the dogs a projection of the figure, an ego spirit entity. Her oeuvre is distinctive in its emphasis upon the allegorical and its confident combination of autobiographical elements as well as gender fluidity.

Eisenman is both a painter and a sculptor; dual artistic practices were commonplace in the time of the Old Masters but less so within contemporary practice. Eisenman uses different materials as she would different colours, making no hierarchical distinction between them.

Eisenman simultaneously weaves art historical references and elements of pop culture and menial contemporary existence into her work. In this way, she creates instances that stand somewhere between ‘Art with a capital “A”’ and life, between a removed cultural past and a present moment defined by fluidity and consumption.

Pop Culture is typically understood as the accumulation of the various cultural products consumed by the majority of a society’s population; it is characterized by mass accessibility and appeal. Coined in the 19th century, the term was traditionally associated with the lower, kitsch tastes of poorer or uneducated classes, as opposed to the sophisticated ‘high culture’ of the upper class. In the context of today’s consumer society, the introduction of pop culture into the artwork has become as much a political gesture as it is an aesthetic one. By blurring the visual boundaries between ‘high’ and ‘low’ art, artists are able to destabilise and undermine cultural hierarchies and the divisions of class, gender or race implicit in them.

What other artists’ work does Nicole Eisenman’s practice relate to?

Breughel the Elder (c. 1525–1530 1569) was the most significant artist of Dutch and Flemish Renaissance painting, known for his landscapes and peasant scenes (so-called genre painting); he was a pioneer in making both types of subject the focus in large paintings.

Leon Golub (1922 –2004) was an American painter known for his unflinching depictions of brutality and war. Over the course of his career, the artist addressed various factions of violence and abusers of power in his paintings, with depictions of Fidel Castro, Richard Nixon, terrorism, and police violence. He was married to and collaborated with the artist Nancy Spero (1926 –2009). See hauserwirth.com/artists/2842-leon-golub

Philip Guston (1913 – 1980) was a Canadian American painter and printmaker in the New York School, an art movement that included many abstract expressionists like Jackson Pollock and Willem de Kooning. In the late 1960s Guston helped to lead a transition from abstract expressionism to neo-expressionism in painting, abandoning so-called “pure abstraction” in favour of more representational, simplified renderings of personal symbols and objects. His existential, lugubrious paintings after 1968, employing a limited palette, are some of his most well known. See hauserwirth.com/artists/2849-philip-guston

Amy Sillman (b. 1955) is an influential contemporary American painter whose practice conflates the abstract and the figurative into large-scale, gestural oil paintings, she has been intrumental in pushing the language of abstract painting into a contemporary realm. In her paintings colour and gesture merge unconscious thoughts and elements of the real world. Her practice demonstrates a knowledge and understanding of the abstract tradition in painting married with a highly contemporary vision; she also uses collage, drawings, and digital media in her work.

The conventional timeline of artists who are sometimes considered as ‘Old Masters’ or ‘Great Artists’.

Representing forms that are recognizably derived from life.

The term Gender is used to describe the characteristics of women and men that are socially constructed, while sex refers to those that are biologically determined. People are born female or male, but learn to be girls and boys who grow into women and men. This learned behaviour makes up gender identity and determines gender roles.

Art or other objects that, generally speaking, appeal to popular rather than ‘high art’ tastes.

A prize awarded annually by the John D. and Catherine T. MacArthur Foundation typically to between 20 and 30 individuals, working in any field, who have shown ‘extraordinary originality and dedication in their creative pursuits and a marked capacity for self-direction’ and are citizens or residents of the United States.

Combining or involving several academic disciplines or professional specializations in an approach to a topic or problem.

The term generally refers to the most recognized European artists—mostly painters—working between the Renaissance and 1800.

Popular culture (also called mass culture) is generally recognized by members of a society as a set of the practices, beliefs, and objects that are dominant or prevalent in a society at a given point in time.

Surrealism was a cultural movement which develop in Europe in the aftermath of World War I and largely influenced by Dada. The movement is best known for its visual artworks and writings and the juxtaposition of uncommon imagery. 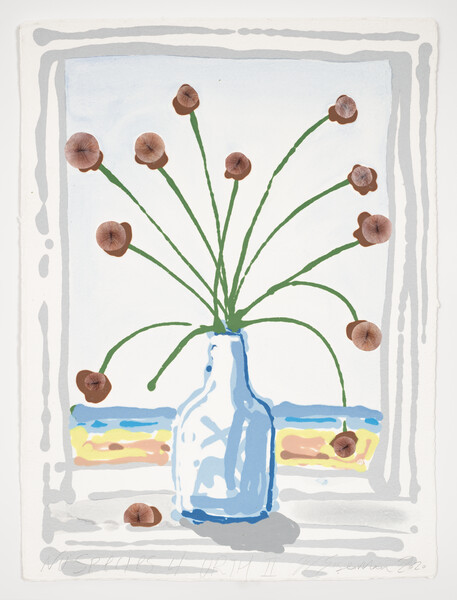 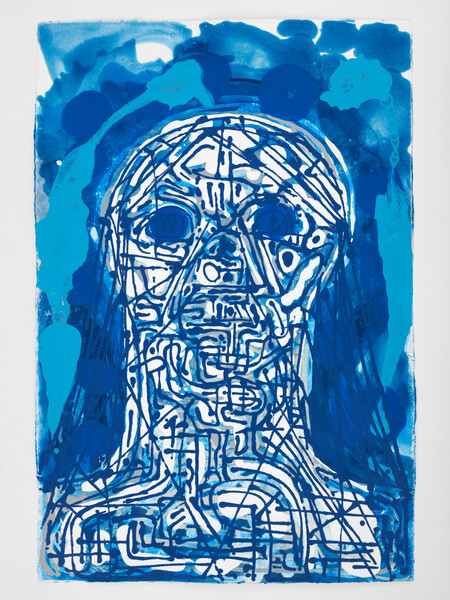 Many people regard gender as a set of cultural norms and values constructed and imposed by a patriarchal society and therefore to be rejected. How can we use art to challenge society and demonstrate our political voice?