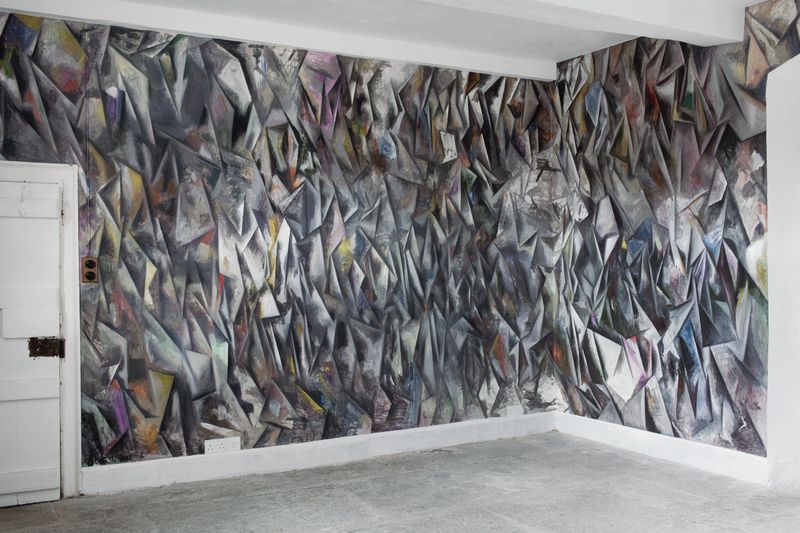 In June 2013, over a period of five weeks, Guillermo Kuitca was artist in residence in the Farmhouse at Durslade Farm. Beginning in a corner of the dining room, Kuitca painted directly on the walls, expanding from floor to ceiling and 360 degrees around the room. Having experimented with this working process on the walls of his Buenos Aires studio, this is the first instance that Kuitca has created a painted space that envelops the viewer. Kuitca’s installation will remain permanently on display in the dining room of the Farmhouse.

‘I was made to feel very welcome throughout my stay in Bruton. Each day, I walked through the countryside from the village to Durslade. The Farmhouse at this time was a construction site. Absorbing the age of the walls, which are almost 250 years old and being in this construction environment brought to mind traditions through the ages, of the artist working quietly amongst scaffolding on a mural each day. Jackie Brooks an artist based in Bruton assisted me during the whole process.

I had no previous image or script in mind but began in one corner of the room and started expanding until I arrived again at where I had begun. Every day was an improvisation; following the images, hearing as opposed to seeing them, the whole process became closer to a musical composition. The Summer at that particular moment in Somerset was very warm and dry and though I didn’t expect to change my usual sombre palette – the quality of the light seeped into the painting – sombre tones grew vibrant and bold.

Working with Luis and Alice, I was keen to select those elements – a table, chairs, cloth, plates and glasses – which would become a part of the room, not of the work itself but not alien to it either. I feel as though there is a religious, almost austere quality to the room and I wanted to retain this feeling. It brings me great joy to know that this room will be filled with people sitting together sharing good food and wine.

My time in Somerset was such a vivid and influential experience that has opened up a new way to conceive my paintings, which I know I will long continue to explore.’