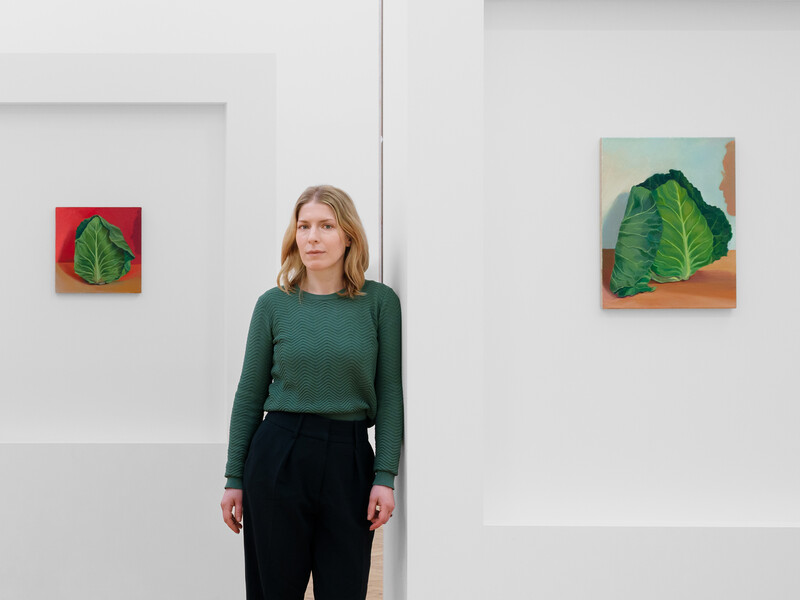 We are proud to welcome Allison Katz to the gallery. Over a decade, Katz (born 1980, Montreal, Canada) has investigated the ways in which aesthetic practices link and absorb autobiography, commodity culture, information systems and art history. Her diverse imagery, including cocks, cabbages, mouths, fairies, elevators, noses, waterways, and variations on her own name, appear as recurring symbols and icons which build an unending constellation of ideas and references. Images transmute across the media of painting, posters, ceramics and installations. It is through this act of returning to, copying, transforming and reshaping motifs that the artist creates a lineage and continuity from one work to another, informing and connecting the totality with each new appearance. ‘I paint like I write, that is, I build around quotes, which is a conversation, in effect,’ says Katz. Her subjects are united by a curiosity for how an image passes through embodied experience, while its elasticity of meaning is shaped by impersonal, cultural conditions through time. In this way her work addresses the ambiguity of subjectivity and its presentation.

‘We are honored to welcome Allison Katz to Hauser & Wirth,’ says Manuela Wirth, Hauser & Wirth President. ‘She is among a compelling new generation of artists bringing forward fresh energy in the medium of painting. Allison is an assured innovator whose work derives power from its unique combination of intellectual rigor with a signature element of wit. She draws on a deep knowledge of art history and her own personal visual lexicon to explore an astounding breadth of ideas, often creating enigmas that stay with us and make us think. We are excited to work closely with Allison and share her vision widely with international audiences in the months and years ahead.’

Katz currently lives and works in London, England. She studied fine arts at Concordia University in Montreal and received her MFA from Columbia University in New York in 2008. The artist’s first exhibition with Hauser & Wirth, featuring new work, will take place in autumn 2023 in Los Angeles. Early next year, Katz will participate in an artist’s residency at Hauser & Wirth Somerset. 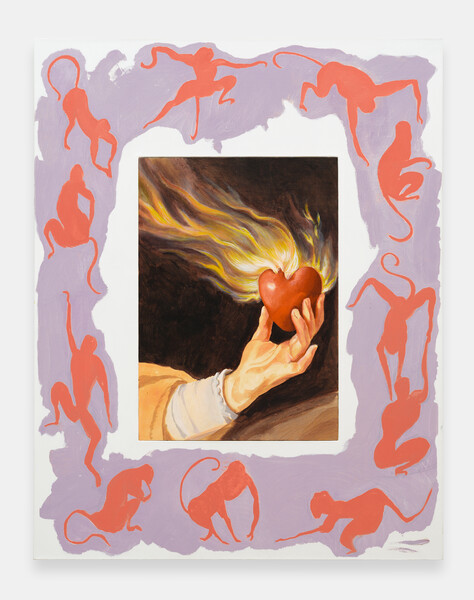 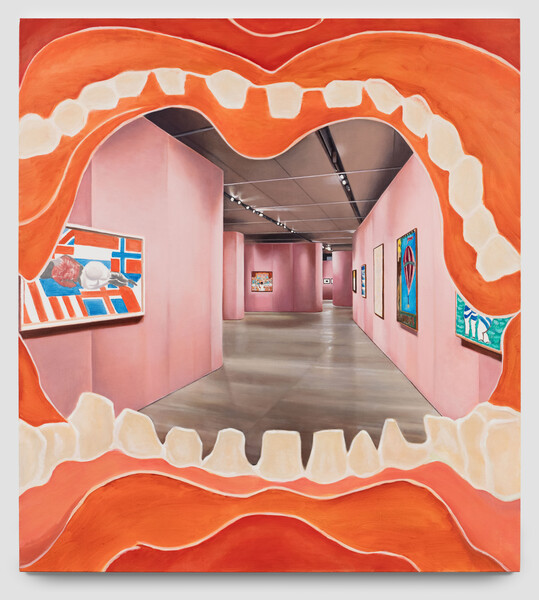 Katz’s work is an examination of painting’s plane as a flat space where depth can appear, in both a literal and metaphorical way. Beyond the picture plane, her practice has a complex arrangement with the tactile world, engaging with the idea of the viewer as both subject and participant. Katz’s use of texture complicates the painting’s window-like view into another world, grounding the physicality of images in our own sense of touch by mixing sand or rice into the pigment.

Further breaking the autonomy of the illustrative tableau, her staging of exhibitions is inextricably linked to the paintings but also separate to them, and often an artwork in and of itself. The walls that she designs are built around the idea of a viewer’s encounter. This may involve the creation of contrasting perspectives, rooms within rooms or one-to-one painted copies of pre-existing architectural features, such as an elevator. Her relationship to site specificity is fluid, and motivated by constraints and a willingness to undermine the premise itself: paintings made to measure for one location find new meaning through a completely alternative set-up elsewhere. The autonomy of painting as a discrete object is both complicated and energized by the contingency of its reception and by the exhibition as form. 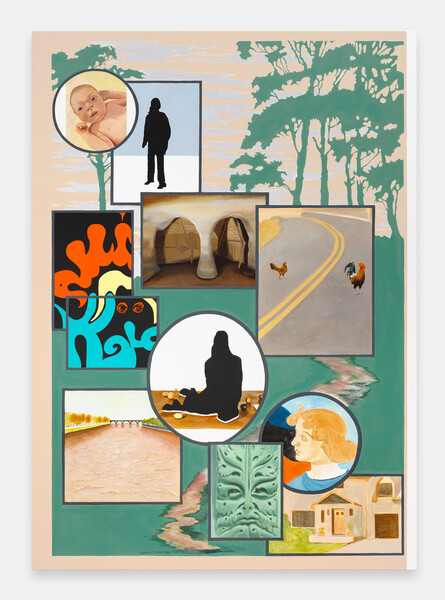 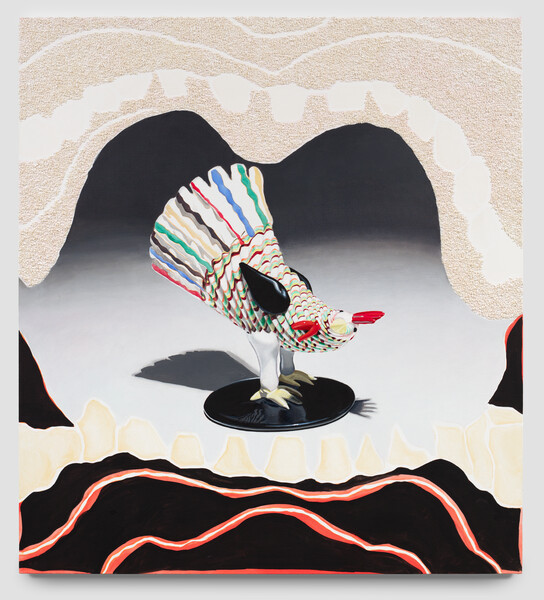 Katz’s interest in framing as both motif and subtext is a formal technique that investigates subjective assumptions; the frame becomes a portal for making sense of the world. The windows and mouths that frequently appear in her paintings address a duality between the sensual and intellectual consumption of information, and synthesize different kinds of sensory experience, such as taste and sight. Exhibition posters frame the event with actual dates and times, but also skew and extend it, by existing as independent artworks that are displayed after the fact.

Katz’s use of wordplay, double entendre or riddle, in both her choice of titles and the generation of the image itself, extends to the use of her signature as a visual element, and speaks to a self-referential thread running throughout her work. The AKgraph paintings—whose titles play on the origins of the words autos ‘self’ + graphos ‘written’—mine the territory between everyday signatures and formal drawing, inscribing identity to leave a trace. Creating a likeness of her own face through the elements that make up her name, Katz pits cartoonish forms against ideas assumed to be stable and hierarchical. This playful and inquiring touch refuses the conventional notion of an artist’s ‘signature style’ in favor of a broader engagement with how a painting can be made today. 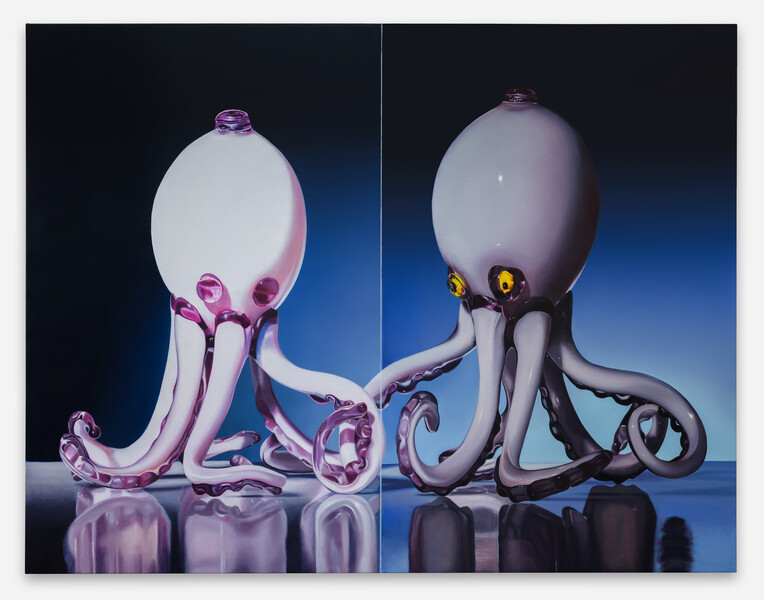 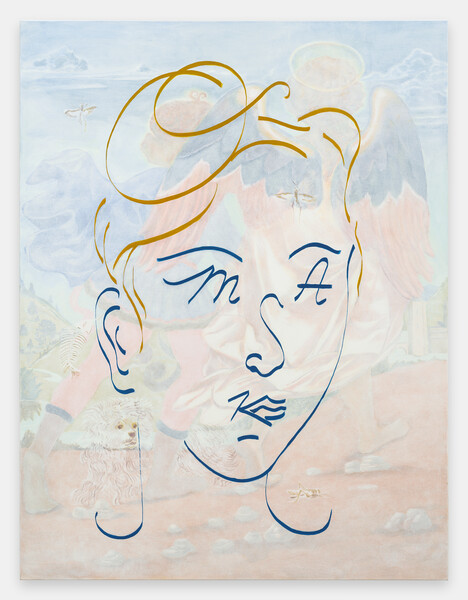 Architectural interventions are an integral part of Katz’s practice; her highly considered spatial environments combine paintings, posters and ceramics to produce unique encounters and perspectives. She creates a flow of subtle choreography in alignment with the imagery depicted. By engaging with site-specific conditions, Katz compels the viewer to create connections between her disparate works, giving way to poetic order amidst a proliferation of visual references. Recent works and exhibition titles have alluded to such networks of connection and communication more literally, whether in reference to bodily arteries and the circulation of blood, the canals and systems of transportation in Venice, or the transmutation of an object as it moves from sculpture to photography to painting. Her canvases are, as Katz explains, ‘active locations’ with ‘possible entrances and exits,’ calling attention to the multiple layers of consciousness that reside in a painting’s surface and subject.

Katz received widespread critical recognition for her first traveling UK solo exhibition ‘Artery’ at Nottingham Contemporary in 2021 and Camden Art Centre in 2022. The accompanying exhibition catalogue for ‘Artery’ will be released in early 2023. Her work is included in the 59th International Art Exhibition of La Biennale di Venezia in 2022, ‘The Milk of Dreams,’ curated by Cecilia Alemani. Katz is currently participating in Pompeii Commitments, a research project and artistic residency at the archaeological site in Italy. Additional significant institutional solo exhibitions of her work have been organized by the MIT List Center for the Arts, Cambridge, MA; Oakville Galleries, Oakville, Canada; and Kunstverein Freiburg, Freiburg, Germany.