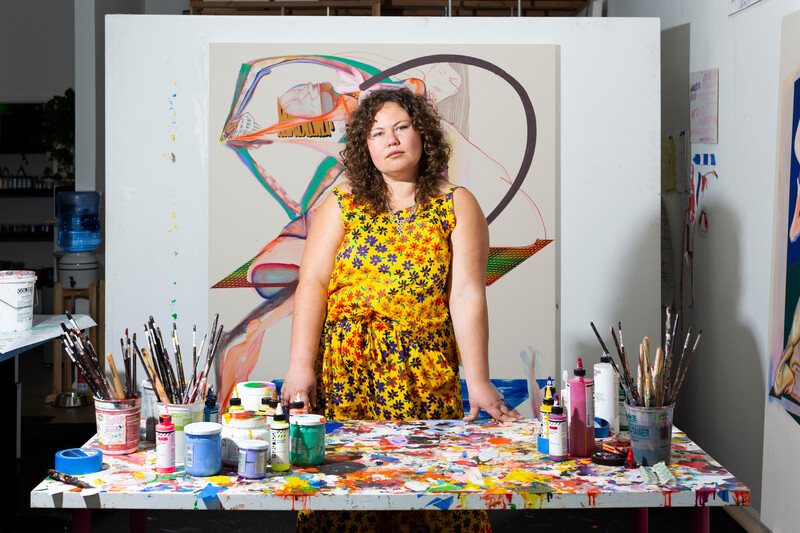 Born in Chicago in 1985, Christina Quarles has achieved wide acclaim for her exploration of bodily experience—from the weight and gravity of the physical world, to the pleasures and pressures of societal existence—in vivid, enigmatic paintings teeming with limbs, torsos, and faces reconfigured into new forms. Brought to life through painterly gestures and an unexpected palette, the artist’s scenes suggest the different ways in which race, gender, and sexuality contribute to the coalescing of identity. Quarles’ work spans drawing, painting, and installation, and embraces the permeability of the constructed form. As a queer, cis-woman born to a Black father and a white mother, she has described her position of engagement with the world as ‘multiply situated,’ an experience of embodiment reflected profoundly in her sui generis art.

Quarles describes her work ‘as being portraits not of looking at a body, but portraits of being within your own body.’ In their visceral intensity, these portraits bring to mind the art of late Austrian master Maria Lassnig (1919-2014), whose theory of ‘body awareness’ famously shaped a Surrealist-influenced method of communicating her mental perception of herself and her feelings through lacerating depictions of her own naked figure. Similarly, Quarles’ work acts as a gateway to explore what it means to know oneself. Though many bodies in her paintings appear to be nude, their gender is deliberately indeterminate. Stylized human limbs trace the picture plane, merging and intersecting with saturated color-blocked backgrounds and objects. Quarles has stated that she hopes to ‘encourage people who have never had cause to question their identity to do that. And maybe question everything else, too.’ 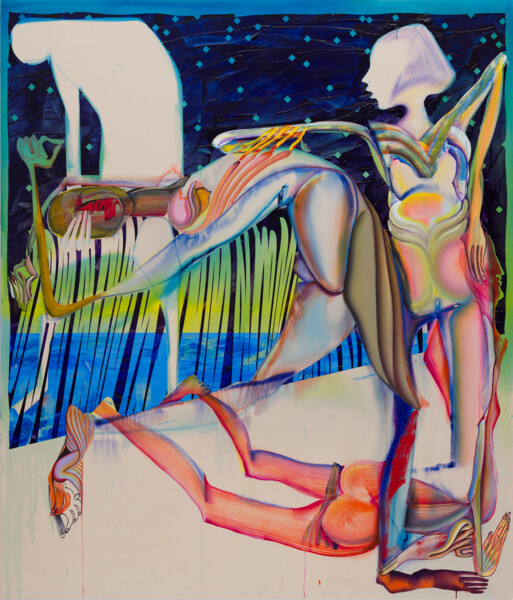 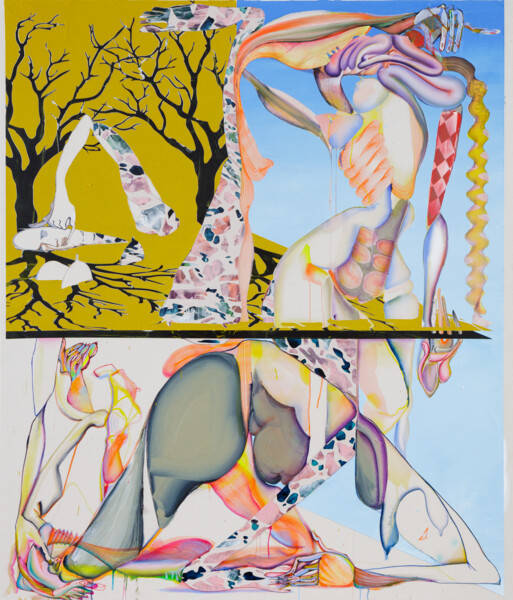 Marc Payot, President, Hauser & Wirth, remarked, ‘Christina Quarles is among the most compelling painters of her generation, an assertive and wonderfully inventive artist. We are honored to begin our collaboration with her. Christina’s focus on synthesizing digital technology and traditional painterly techniques situates her unmistakably at the vanguard. But at the same time, her fearlessness and her originality in exploring questions of the body and identity place her in a lineage of artists such as Maria Lassnig, Louise Bourgeois, Lee Lozano in her early years, Paul McCarthy, and other masters in our program. We are thrilled to welcome Christina to the gallery, and we look forward to working with Pilar Corrias in the months and years ahead.’

Pilar Corrias, Founder, Pilar Corrias, stated, ‘I’m greatly looking forward to co-representing Christina Quarles with Hauser & Wirth and working together in partnership. Christina is one of the most relevant young artists working today and her practice embodies the core values of my gallery. This collaboration reinforces the importance of her work and what it means to society at large.’

The gallery will present its first solo exhibition of Quarles’ work at its 22nd Street gallery in West Chelsea, New York in Fall 2022.

‘…Her fearlessness and her originality in exploring questions of the body and identity place her in a lineage of artists such as Maria Lassnig, Louise Bourgeois, Lee Lozano in her early years, Paul McCarthy, and other masters in our program.’—Marc Payot 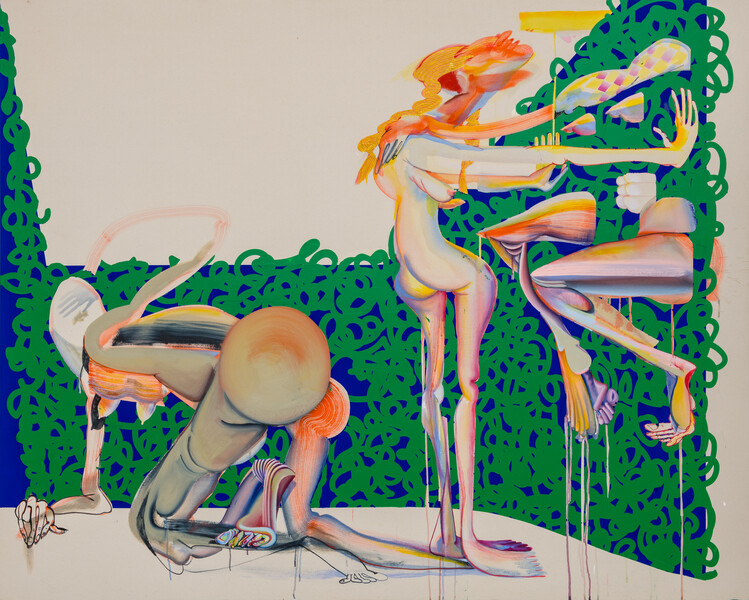 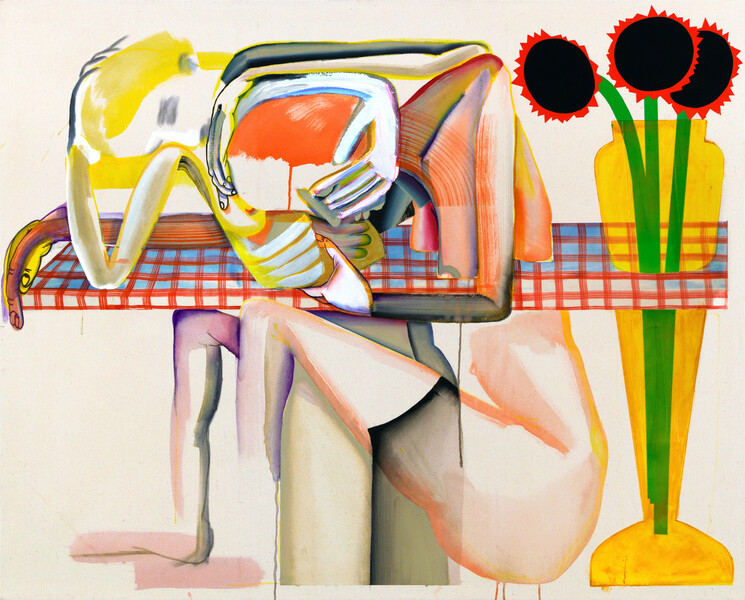 Christina Quarles (b. 1985) is a Los Angeles-based artist, whose practice works to dismantle and question assumptions and ingrained beliefs surrounding identity and the human figure. Born in Chicago and raised by her mother in Los Angeles, Quarles took art classes from an early age. She developed a solid foundation for a lifelong drawing practice through after-school programs and figure drawing classes at the Los Angeles County High School for the Arts.

In 2007, Quarles graduated from Hampshire College with dual BA degrees in Philosophy and Studio Art, then trained and worked in the field of graphic design. As her immersion in drawing progressed, she became well versed in and heavily influenced by the imagery and painterly processes of art historical masters Egon Schiele, Frida Kahlo, David Hockney, and Philip Guston. Seeking a vehicle for expressing feelings and experiences language alone cannot capture, Quarles went on to attend Yale University, where she received her MFA in 2016. She studied at the Skowhegan School of Painting and Sculpture that same year.

Even in her earliest works, Quarles honed in on the bodily experience as her subject, beginning an artistic engagement with the contradictions inherent in one’s own complex, nuanced identity. At Yale, she worked on paper with gestural line making, later translating these forms onto large canvases that allowed her to make broader compositions. These early canvases regularly included written phrases, puns, and patterns that played with ambiguity and manipulated space, simultaneously anchoring and displacing figures. A defined plane with flowers could be a field or blanket, a sky-blue gradient could represent natural light or the flat surface of a desktop computer, as in ‘Let Us In Too (Tha Light)’ (2018).

In her current work, Quarles has moved text from the paintings themselves and into her titles, further winnowing out a predetermined visual narrative. These titles are inspired by overheard phrases, such as in the installation ‘Forced Perspective (And I Kno It’s Rigged, But It’s tha Only Game in Town)’ (2018), a highlight of the Hammer Museum’s ‘Made In L.A.’ exhibition. In that large-scale work, Quarles combined trompe l’oeil floral wallpaper and raw canvas with inscribed poetry and song lyric quotes, to suggest the illusory boundaries that define the self and our often limited interpretations of it.

As her practice has developed, Quarles has engaged in more overtly political subject matter. In 2018, she began work on ‘Casually Cruel’ (2018), heavily influenced by the situation at the US/Mexican border where families were subject to brutal separation. In this painting, two figures are enclosed by a blue plane covered with swirling green lines in a scene sandwiched between stretches of raw canvas. A third figure appears in the blue and green plane, its legs and limbs both trapped and separated from the others.

In terms of technique, Quarles’ avid experimentation and focus on transfiguring the material terrain of the canvas, connects her with such predecessors as late American artist Jack Whitten. Approaching the canvas with no predetermined composition, Quarles begins making marks that evolve into line drawings of human forms and body parts. She then photographs the work and uses Adobe Illustrator to draw the backgrounds and structures that ultimately surround the figures. In a reversal of the typical layering of a composition, Quarles’ figures precede and even dictate the environment that they come to inhabit. Once the composition is created digitally, she paints it onto the canvas, using stencils created by hand or by a vinyl plotter as a guide. Intersecting color, texture, and layers, the resulting works are more akin to relief sculpture than conventional painting – a material outcome that further underscores Quarles’ themes of embodiment and experience for both the artist and the viewer. 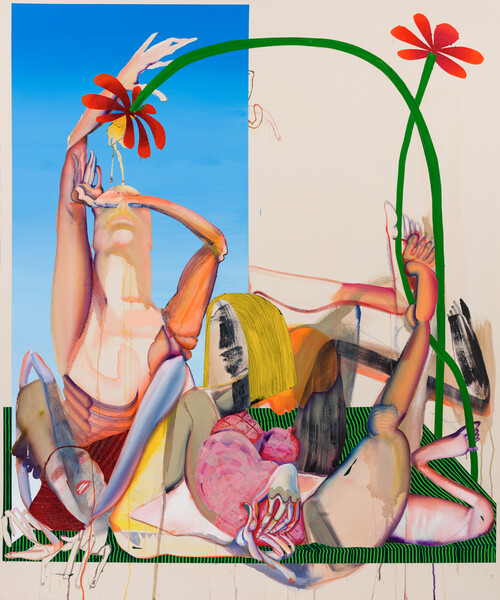 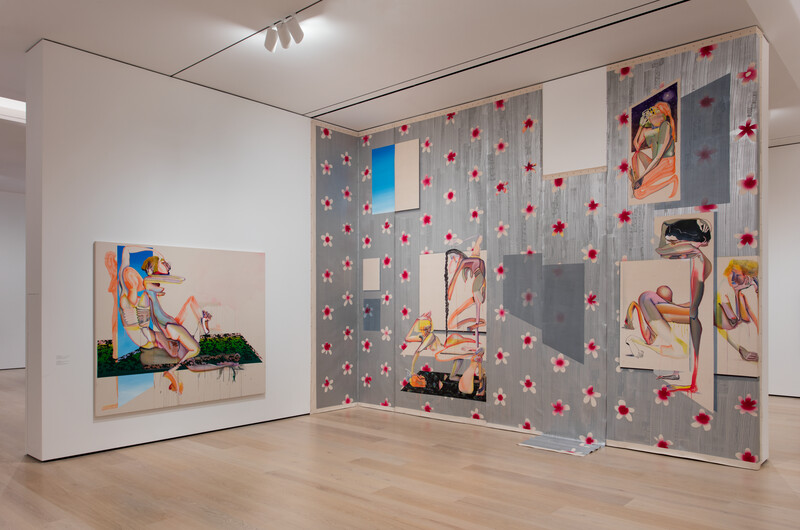 Forced Perspective (And I Kno It's Rigged, But It's tha Only Game in Town), 2018 © Christina Quarles Photo: Brian Forrest

Quarles has been the recipient of several awards and grants. She was the inaugural recipient of the 2019 Pérez Art Museum Miami Prize, in 2017 she received the Rema Hort Mann Foundation Emerging Artist Grant, and in 2015 she received the Robert Schoelkopf Fellowship at Yale University. In addition, she participated in the Fountainhead Residency in 2017.