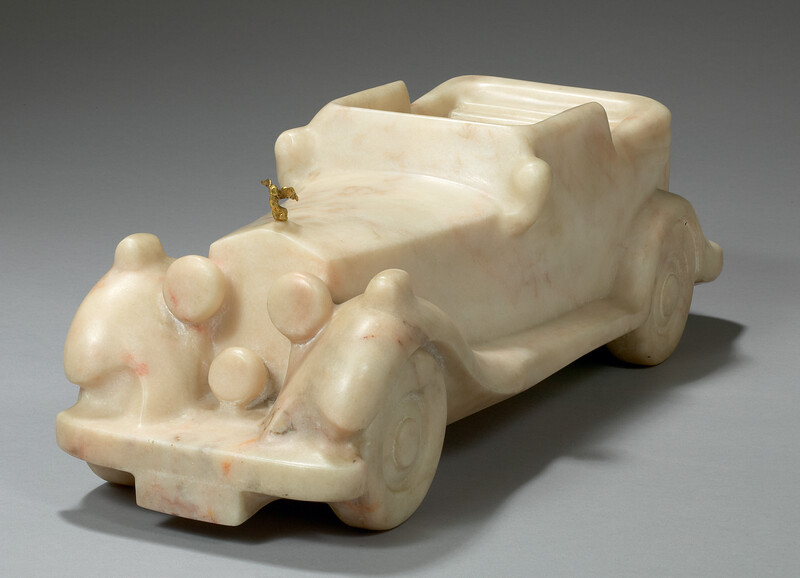 Alina Szapocznikow is best known for her sculptural explorations of the existential strangeness and fragility of the human body. In 1969, she began exploring a quixotic idea about other kinds of bodies: the gaudy body politic of the American Dream—as Szapocznikow, a Polish Jew living then in Paris, saw it—and the body of a Rolls-Royce, an apotheosis of the wealth and power the United States represented for her.

The conceptual project, to make a twice-lifesize sculpture of a Rolls-Royce from a massive slab of pink marble and exhibit it at Documenta V, never came to fruition. But a small-scale version of the project, My American Dream, and her efforts to raise money for the larger piece— by reaching out to the kinds of all-American hedonists the piece itself would lampoon (Hugh Hefner, for example)—ended up comprising a work in itself, caustic, comical and prophetic. A translated transcription of the letter below. 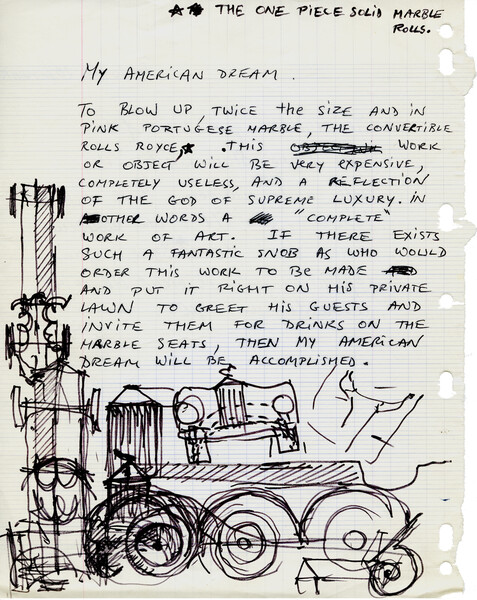 Manuscript for the project ‘My American Dream,’ 1970 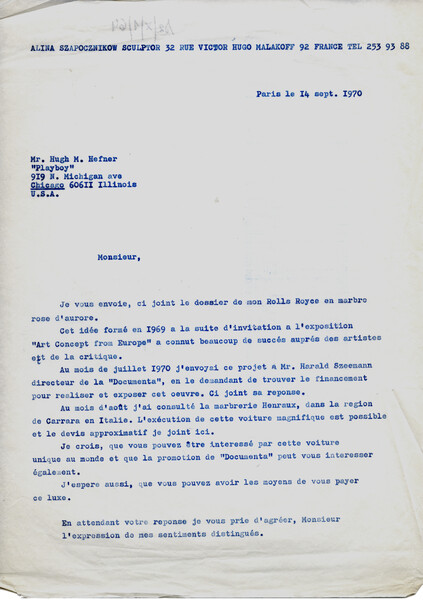 Sir,
I send you, attached, the dossier regarding my Rolls Royce in Rosa
Aurora marble.
This idea, conceived in 1969 following an invitation to the exhibition
‘Art Concept from Europe,’ was met with great artistic and critical
success. In the month of July 1970 I sent this project to Mr. Harald
Szeemann, director of Documenta, and asked him to find the financing
to realize and exhibit this work. His response is attached.
In the month of August I consulted the marble quarries of Henraux,
in the Carrara region of Italy. The execution of this magnificent car is
possible and I have attached the approximate estimate here.
I believe that you may be interested in this car, unique in the world, and
that the promotion of Documenta might equally interest you. I also hope
that you have the means to afford this luxury yourself. In awaiting your
response, I hope that you will accept, sir, the expression of my distinguished
sentiments.
–
Tracing a body of work by Alina Szapocznikow from 1962 to 1972, the gallery’s first solo exhibition devoted to Szapocznikow, ‘To Exalt the Ephemeral: Alina Szapocznikow, 1962-1972,’ will be on view at Hauser & Wirth New York, 69th Street, 29 October – 21 December 2019.