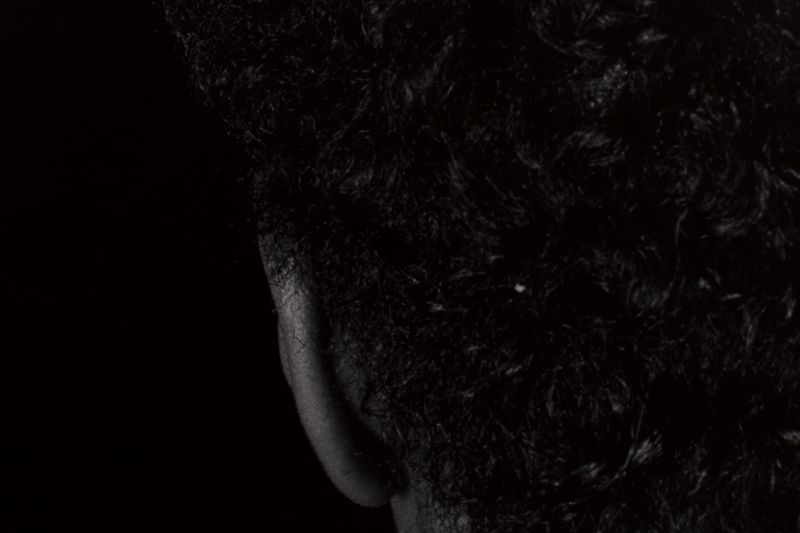 To Complete the Analogy: Lorna Simpson, or the Question of History

'How one is able to interpret a work of literature or visual art depends on how one sets about reading it, a process that may be keyed to theoretical, historical, aesthetic, or political issues. '

Now
Woman power
is
Black power
is
Human power is
always feeling
my heart beats
as my eyes open
as my hands move
as my mouth speaks
I am
Are you
Ready.
– Audre Lorde (1973)
How one is able to interpret a work of literature or visual art depends on how one sets about reading it, a process that may be keyed to theoretical, historical, aesthetic, or political issues. when it comes to considering the oeuvre of Lorna Simpson, which has already generated a vast corpus of particularly rich and rewarding propositions, we may wonder if there is a different way to approach her photographic production – a body of work that has occupied a singular position and broken new ground since the mid-1980s.
For the first time in the history of American art, a woman artist was engaged in a conceptual practice that addressed both African American cultural history and the memory of slavery, both the heritage of artistic or cinematic avant-gardes and conceptual photography, questions of race and gender as well as political consciousness and critical thought. Simpson’s work would enter the mainstream american and international art milieu by advancing notions of marginality, invisibility, and stereotype. It was a fine balance, especially when considering the latter, since artists of her generation who emphasized their belonging to black (or nonwhite) culture were quickly labeled with the cliché of otherness. Huey Copeland, in his essay ‘‘bye, bye black girl’: Lorna Simpson’s Figurative retreat,’ trenchantly analyzes the reception of Simpson’s work, notably citing with critical irony the front page of ‘New York Newsday’ on September 19, 1990: a full-page photograph of the artist, standing in front of a detail of her 1989 photo-text work ‘Untitled (Prefer, Refuse, Decide),’ accompanied by a huge headline proclaiming ‘The Outsider Is In.’ According to Copeland, Simpson’s fortuitous ascension was taken

to augur the beginning of the end of white patriarchal exclusion, the absolute other now given her ‘place in the sun’: representation in the age of representativeness.

Of course, such representation is never without its price and as the mascot for a brand of specious multiculturalism, Simpson was expected to speak tirelessly of and for her oppressed sisters, and in the idiom that had already become her signature.(1)

This altogether singular artistic position goes hand in hand with Simpson’s sharp lucidity, allowing her to think about the context at the heart of her production; it is the latter that spares her work from being co-opted. Despite the ‘object’ nature of her photographic installations and the ease of their assimilation by an art market hungry for artists responsive to its expectations, she confounds these expectations by voluntarily obscuring her sources. like a rebus combining visual elements and words, a Simpson work offers with its photographs and texts – fragments of deconstructed narratives, sentences on the run – moments when the spectator, focusing on the text and the image, suddenly gains the freedom to make the references resonate and thereby understands that it is this process, in turn, that is the producer of meanings.
In the second chapter of Toni Morrison’s novel ‘Home’ (2012), we read: ‘Frank fell asleep between a wool blanket and plastic slipcovers and dreamed a dream dappled with body parts. He woke in militant sunlight to the smell of toast. It took a while, longer than it should have, to register where he was. The residue of two days’ hospital drugging was leaving, but slowly. Wherever he was, he was grateful the sun’s dazzle did not hurt his head. He sat up and noticed socks folded neatly on the rug like broken feet’.(2)

Simpson’s approach is astutely based on the model of objective photography that privileges a frontal and perfectly impartial perspective, yet her work turns on the moment when the viewer’s gaze pierces this facade of forced neutrality.

Two elements here bear attention and may be seen as relevant in reading Simpson’s work: Morrison’s reference to both a ‘dream dappled with body parts’ and socks ‘like broken feet.’ These are not necessarily literal, for when reading Morrison’s words, pausing in particular on the mental images conjured by these ‘body parts’ and these ‘broken feet,’ it is understood that this kind of narrative skews the relationship between fiction and reality. We enter a very visual world through imagination; we see what the author speaks of; we intuitively grasp what she evokes. The second is the question of point of view. Where do we stand when we observe a scene? How might we reassemble the scattered elements? The body fragments? The repetitions?
Admittedly, African American literary and visual culture is an important reference that helps us to grasp the foundations – and read between the lines – of Simpson’s work. As Deborah Willis, an authority on black photography in the United States, suggests in her 1992 book about Simpson (which was one of the first monographs devoted to her work): ‘one could argue that within the African-American community, no art is developed without narrative, whether explicit or implied. Lorna Simpson’s photographic work is rooted in this tradition; it uses literal, suggestive and visual narratives to create a partly personal, partly fictional account of contemporary society’.(3)
At the same time, for Simpson, immersion in this tradition is mediated by her understanding of the approaches of other artists. She notes, for example, how important Chantal Akerman’s and Babette Mangolte’s films were to her. (Simpson took Mangolte’s course at the University of California, San Diego (UCSD), in 1985.) For both Akerman and Mangolte, the question of point of view is essential. As Akerman explains, speaking of her experience as director of Jeanne Dielman, ’23 Quai du Commerce 1080 Bruxelles’ (1975) in an interview published in the California-based feminist publication Camera Obscura:
I didn’t have any doubts about any of the shots. I was very sure of where to put the camera and when and why. It’s the first time I had that feeling so strongly.
You know who is looking; you always know what the point of view is, all the time. It’s always the same.
It was not a neutral look – that doesn’t exist anyhow. The way I looked at what was going on was a look of love and respect. I let her live her life in the middle of the frame.(4)
In her collaboration with Mangolte, who was the film’s director of photography, Akerman arranged for the camera not to move. Her own height determined the framing. As a result, when the character played by Delphine Seyrig is standing or stands up, her upper body is cut off. Mangolte, in her own 1976 film ‘What Maisie Knew,’ privileges a child’s point of view and affirms the usage of a ‘subjective camera.’(5) The way Simpson frames the women’s (and men’s) bodies that she photographs is based on a similar principle. Although we could consider Simpson’s ‘Gestures/ Reenactments’ (1985), ‘Five Day Forecast’ (1988), or ‘Three Seated Figures’ (1989), to cite but a few of her works, as ‘off-frame’ since faces are not visible, we could also say, based on what Akerman proposes, that these bodies, with their heads and legs amputated, translate a different story and send us back to a subjective scale in which the ‘whole; expresses itself as a fragment. Like the absolute rigor imposed by Akerman on her actress and her framing, Simpson’s approach is astutely based on the model of objective photography that privileges a frontal and perfectly impartial perspective, yet her work turns on the moment when the viewer’s gaze pierces this facade of forced neutrality.
The choice of point of view is obviously a crucial question in photography. The decisions the artist makes about what to record, what is or isn’t in the frame, the interactions between images, and what we see and what is out of frame all coalesce in defining and elaborating an extremely precise aesthetic and critical position. Simpson began to shoot black-and-white photographs to capture moments of New York life when she was studying photography at the school of Visual arts at the end of the 1970s. We know that she is very well versed in the history of documentary photography through her studies. She would deconstruct its function bit by bit, however, making the photograph no longer documentary but a document (informer and witness at the same time). 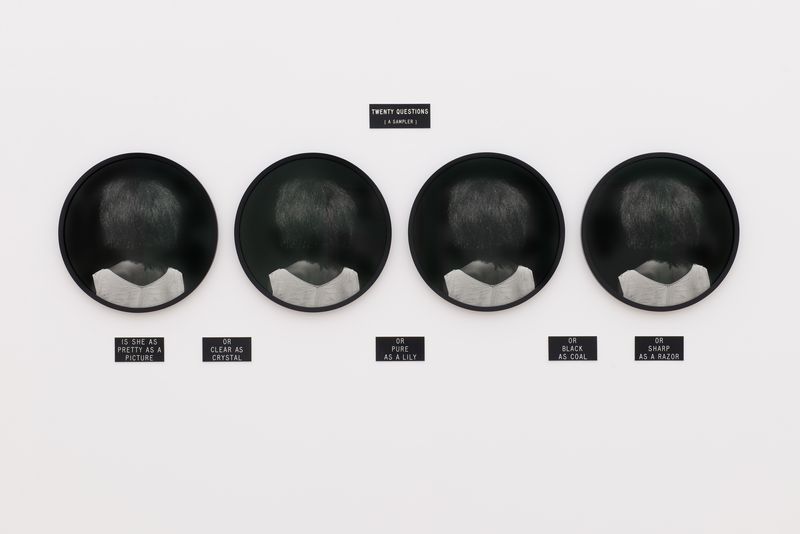 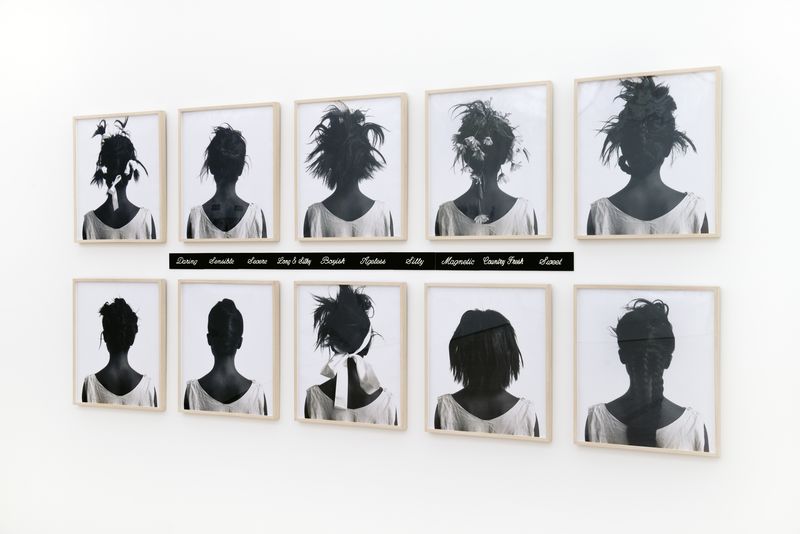 The question of butting heads with history and one’s own her/history could be the one that recurrently illuminates Lorna Simpson’s work. In her text ‘the oppositional gaze,’ Bell Hooks reminds us that slaves were forbidden from looking: ‘the politics of slavery, of racialized power relations, were such that the slaves were denied their right to gaze.’(13) This is also, without a doubt, why the importance of ‘looking toward oneself’ can be interpreted in the Foucauldian sense, as is evident in the way Simpson has experimented with it in works such as ‘Photobooth’ (2008). Hung on the wall, these lost-and-found portraits of people who looked at themselves in the photo-booth mirror become, with the lightness and fragility of butterflies pinned down by entomologists, signs that prolong the life span itself into eternity. Lorna Simpson reminds us that ‘the subject that I reach towards most often is memory.’(14) Forgetting is out of the question.

Translated from the French by Kira Simon-Kennedy