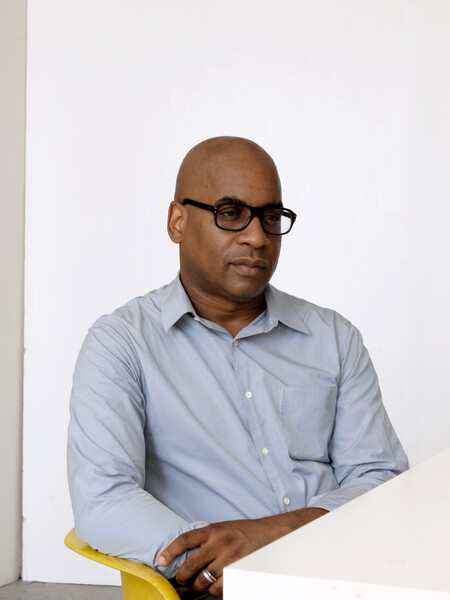 Since the 1980s, Ligon has pursued an incisive exploration of American history, literature, and society across bodies of work that build upon the legacies of modern and conceptual art

Hauser & Wirth will present its first exhibition of Ligon’s work in New York in Fall 2020. The gallery will also cultivate broader national and international audiences for Ligon’s art and ideas, while advancing scholarship focused upon his creative practice through new publications and support for projects at museums and institutions worldwide.
From the early years of his practice, Ligon has been motivated by America’s charged political landscape. His engagement with ideas about race, gender, sexuality, and the construction of identity situate him centrally within a generation of American artists whose work accommodates political readings without being confined to them: Jean-Michel Basquiat, Richard Prince, Adrian Piper, Felix Gonzales-Torres, and Lorna Simpson. 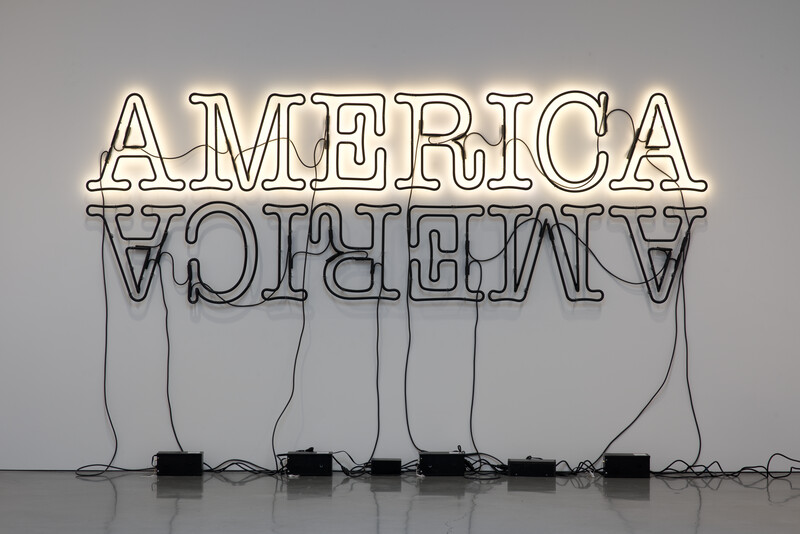 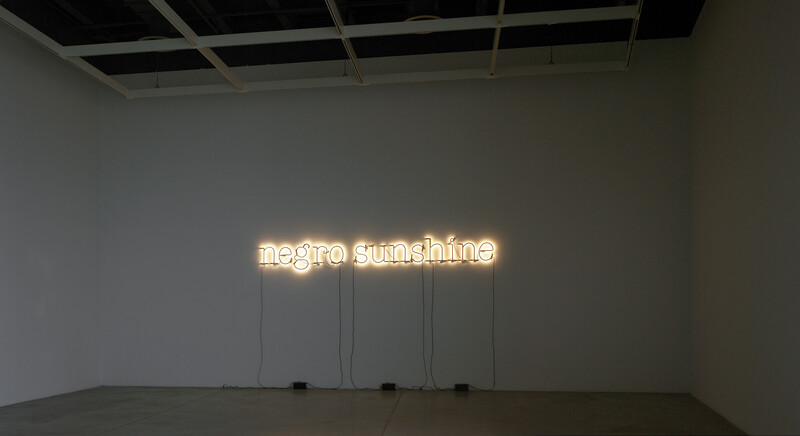 ‘I had a crisis of sorts when I realized there was too much of a gap between what I wanted to say and the means I had to say it with.’

Born in the Bronx, New York, in 1960, Glenn Ligon received a BA from Wesleyan University in 1982. His early practice was grounded in painting, and his canvases of this period built upon the legacies of such Abstract Expressionist artists as Philip Guston, Cy Twombly, Robert Rauschenberg, and Jasper Johns. In 1984 – 1985, Ligon spent an academic year in the Whitney Museum of American Art’s Independent Study Program, developing there a series of representational drawings of iconic sculptures by European artists such as Alberto Giacometti and Constantin Brâncuși, juxtaposed against images of African American hair products rendered in acrylic and ink. This early deployment of objects as signifiers did not fully meet Ligon’s desire for expression: ‘I had a crisis of sorts when I realized there was too much of a gap between what I wanted to say and the means I had to say it with.’ Nevertheless, these works crystallized Ligon’s commitment to using signifiers within formalist procedures as a means to explore the complexities of deep cultural tensions. 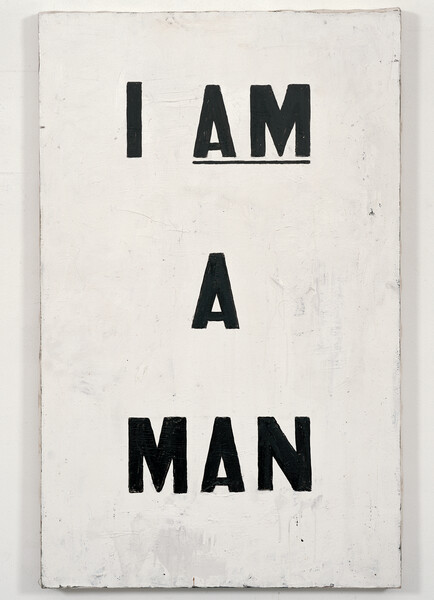 Soon Ligon began incorporating text into his paintings, using the stenciled words that would become a hallmark of his oeuvre, in order to say more. Just as Guston returned to figuration after a long exploration in Abstract Expressionist painting as a response to the Vietnam War, Ligon pursued language as a means of commentary on the cultural milieu of the 1980s and ‘90s, and more specifically on African American identity within a turbulent landscape. Among key works from this period is ‘Untitled (I Am a Man)’ (1988), an oil and enamel painting derived from a black-and-white photograph by Ernest C. Withers, depicting black sanitation workers striking in Memphis and carrying identical signs printed with the text ‘I AM A MAN.’ These words still carry the force of a heavy assertion: a demand for visibility and humanity in response not only to the injustices thrust upon African Americans in the present time, but also to the history of slavery, the effects of which continue to permeate the entire American experience.
Ligon’s 1991 work ‘Untitled (I Am an Invisible Man)’ borrows lines from the 1955 Ralph Ellison novel ‘Invisible Man.’ Ligon strategically blends, muddles, and merges written words in oil stick and graphite, thereby juxtaposing presence and absence, comprehension and illegibility; by claiming these words in a new context, he points to the possibility of how meaning can slip or evolve. Works such as ‘Untitled (I Feel Most Colored When I Am thrown Against a Sharp White Background)’ (1990), which draws text from Zora Neale Hurston’s 1928 essay ‘How It Feels to Be Colored Me,’ or ‘Untitled (There is a consciousness we all have…)’ (1988), in which Ligon uses a comment made in the New York Times about African American artist Martin Puryear, engage not only the language itself but the visual expression of that language to comment on the subject matter. Painted language becomes the construct of the self, and the stencil is a mechanism of reconstruction, with both pop and expressionist qualities, allowing for a complication of Ligon’s address. In the moments of blurred illegibility, Ligon alludes to the systemic exclusion and erasure of African Americans – including the ways in which black artists have been situated in the margins of canonical art history. 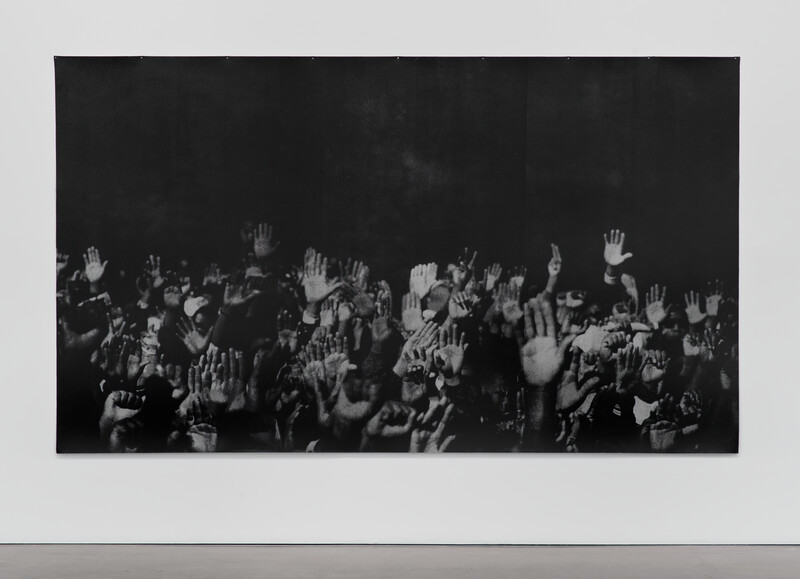 Over the past two and a half decades, Ligon has expanded his practice radically to incorporate new media and structures in large-scale installations, prints, photographs, and sculptures. While sweepingly broad in style and composition, these works engage not only with text-based resources but found images, reworked by the artist in order to amplify the conversation: from the re-appropriation of Robert Mapplethorpe’s photographs of black male nudes, to silkscreen paintings from the Nation of Islam’s Million Man March in Washington D.C., to his seminal ‘Untitled’ (2008), a neon work that spells out the word ‘AMERICA.’ Expressed through this broader range of mediums, Ligon’s engagement with words takes on greater physicality. In ‘Self- Portrait Exaggerating My Black Features and Self-Portrait Exaggerating My White Features’ (1998), Ligon riffs upon Adrian Piper’s seminal work ‘Self-Portrait Exaggerating My Negroid Features’ (1981) to address the complexities in our perceptions of race using two towering images made from the exact same silkscreen, with the title of the work printed clearly at the bottom of each image. The artist appears here in a rare instance of self-portraiture, provoking questions about the gaze and racist stereotyping.
In 2004, Ligon wrote a major essay for Artforum titled ‘Black Light: David Hammons and the Poetics of Emptiness.’ Shortly after, inspired by the notion of working with light, he presented his first neon relief: ‘Warm Broad Glow’ (2005) outlining the words ‘negro sunshine’ in neon letters. Ligon has continued to question the relationship between light and dark in his work, most recently using neon in the handwriting of his friends and colleagues in a work titled ‘Some Black Parisians’ (2019), included in the exhibition ‘Black Models: From Géricault to Matisse’ at the Musée d’Orsay in Paris. This sculptural work displays the names of black models whose identities are the focus of the exhibition. While centering and celebrating the individuals whose likenesses are rendered in these works, Ligon also uses the phrase ‘nom inconnu’ (name unknown) to remind viewers that many of these subjects still remain lost to history.
Ligon engages the state of the world – and urges us to do the same – by posing questions rather than proposing answers. His art demonstrates the ways in which a given subject has permeated culture over time, magnetizing our attention to the mutability of images and our perceptions of them. His questions concern not only the identity of his subject; he interrogates the viewer, the history, the institution, and the cultural context by rendering a portrait of America as a concept, a place, and a nation.
–
Ligon’s solo exhibition ‘Some Black Parisians (Des Parisiens noirs)’ at the Musée d’Orsay in Paris, France, opened 26 March 2019 and will be on view through 21 July 2019. He will present new work at the 16th Istanbul Biennial in September 2019.