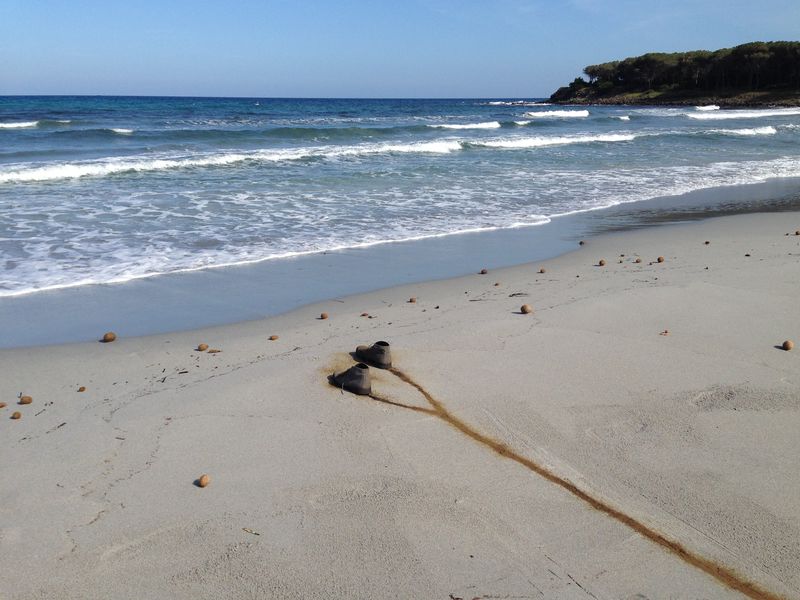 In his many films, Roman Signer most often appears paused, silent, while painstakingly waiting for something to happen (more often than not, an explosion). Perhaps these suspensive experiences stood him in good stead during the four-decade-long wait for his first solo show in an Italian museum – this despite the influential Swiss artist having lived just 200 km north of the Italian border for most of his life. ‘Roman Signer: Films and Installations’ occupies the uppermost floor of the Museo d’arte dell Provincia di Nuoro in Sardinia.
While ascending the three flights of stairs leading up to the gallery, visitors are met by umbrellas hanging from the ceiling (‘Ombrelli,’ 2016). This is the first of the five new works produced by Signer for the exhibition. Another, a video shot on a solitary Sardinian beach (‘Due ombrelli,’ (Two Umbrellas), 2016), features two umbrellas pitched in the sand, resisting the pull of waves until first one then the other gives in, falling and rolling into the water. Both as sculptural objects and performers without agency, umbrellas distil Signer’s entire practice, embodying the clash of bittersweet melancholy and Chaplinesque humour. Over the years, he has tested umbrellas – and other everyday objects such as tables, chairs, boxes or briefcases – in every possible way, subjecting them to the unpredictable effects of combustion, abrasion or surges of water. The display of Signer’s entire catalogue of Super 8 films capturing these quasi-scientific experiments – a collection of 205 works from 1975 to 1989, now digitally converted – is the mesmerizing and immersive highpoint of the exhibition: a forest of tripods and video players, each projected onto the walls at a size of 30–40 cm wide and roughly at visitor’s eye level. In one film, Signer is pictured throwing a wooden box from a great height into a rushing river (‘Fallende Kiste,’ (Falling Box), 1980); another shows him sitting on a ladder lifted into the air by two balloons inflated by the combustion inside two oil barrels (‘Zwei Fässer,’ (Two Barrels,) 1988). Then there is, of course, his iconic ‘Einbruch im Eis’ (Breaking into the Ice, 1985), in which the artist walks out onto a frozen lake until the ice breaks and he falls into the gelid water, turning towards the camera as it zooms in on his terrified face. 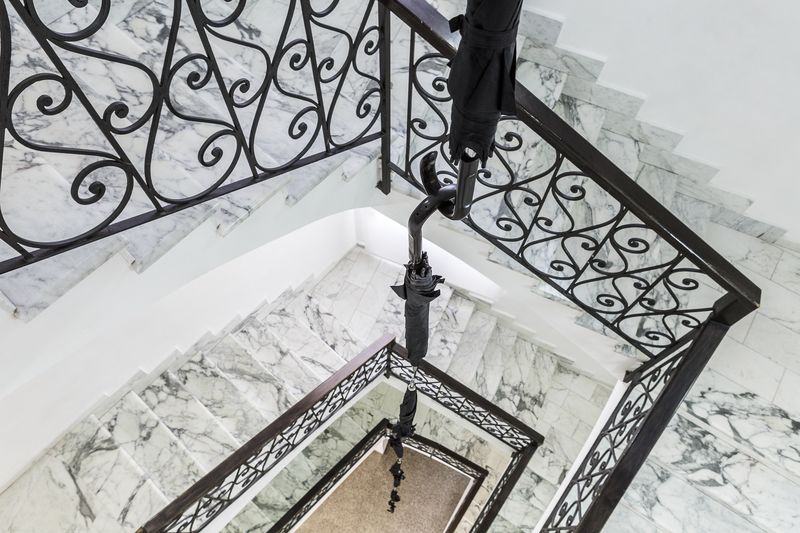 According to Lorenzo Giusti (cocurator of the show with Li Zhenhua), it would take about four hours in total to watch all the works on display. As the viewer’s eyes surf along the walls, waves of visual stimuli come from every direction: objects spin, fuses burn, volcanoes erupt. Signer is often present in these films, at times as a witness, more frequently as instigator of his cheerfully goofy, blatantly handmade, possibly dangerous experiments. The repeated use of his own body aligns the uncontainable forces of chance with human craftsmanship, but also a comforting sense of intimacy. As the decades have passed, Signer has slowly disappeared from the stage, instead casting objects on a human scale, like boots or hats, that take his place in front of the camera. This move towards tropes of absence is particularly clear with ‘Un passo verso il mare’ (‘A Step Towards the Sea,’ 2016): a pair of empty shoes on the seashore with a long cord of fuse attached – suddenly the fuse is lit and the flames fly along its length, until fire engulfs the shoes and brings the video to an end.
Two more site-specific works are on display: one is a wooden labyrinth in which only the heads of other visitors can be seen (‘Installazione,’ 2016); the other is a subtle intervention in which a pair of glasses on a table are illuminated by a beam of light coming from a Super 8 Projector (‘Occhiali,’ (Glasses), 2016). The implication is that Signer may have just disappeared, as if he had held on to one of his many umbrellas, blown away by a whimsical wind: an impossible image that would nonetheless capture the balance of danger and freedom that Signer’s oeuvre has always so effortlessly articulated.